Stop blaming the "other woman": The toxic sexism behind Brangelina infidelity divorce rumors 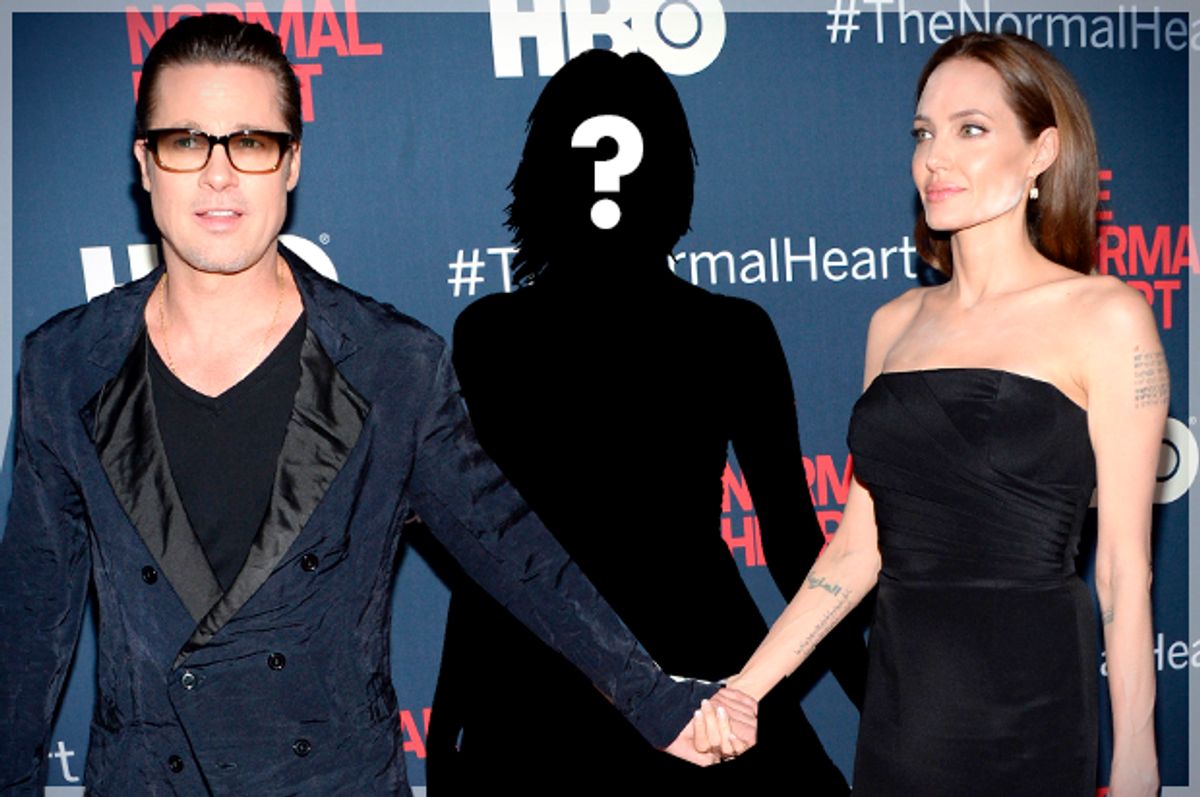 Well, that was fast. Angelina Jolie and Brad Pitt have been “officially” broken up for all of two minutes, and the internet already found a woman to blame for it. Following a TMZ report that the 41-year-old actress filed for divorce from her partner of 12 years, speculation suggests that it was motivated by an on-set fling with Marion Cotillard (“Inception”), who co-stars with Pitt in Robert Zemeckis’ World War II thriller “Allied.” In this homage to the classic romance “Casablanca,” the 52-year-old Pitt plays an intelligence officer who falls in love with a French resistance fighter (Cotillard), who may or not be a Nazi.

InTouch Weekly first reported on these rumors in March under the headline: “The Woman Who Tore Them Apart.” The magazine has alleged that Jolie — an Oscar winner, director and renowned humanitarian with a busy schedule of saving the world — became consumed with jealousy over Pitt’s new leading lady. “Marion is not only beautiful and talented,” In Touch wrote, “but she’s exactly the kind of sultry European actress Angie has always wanted to be.”

You know the details because they’re interchangeable with every single report on the Pitt-Jolie marriage over the past decade. It’s a mad lib of celebrity discontent — including allegations of screaming fights, tearful confessions, late-night walkouts and the oldest canard of them all: the specter of another woman, an evil succubus whose sole purpose is to wreak havoc in the lives of the beautiful and famous. The sexist trope of blaming women for a man’s infidelity is trotted out every other week to sell tabloids, allowing men to get off the hook while their wives and mistresses are burned at the stake for their dirty deeds.

In the case of Angelina Jolie and Brad Pitt, rumors of his wandering eye aren’t just possibly untrue. It’s the exact same bullshit women have to deal with every day.

When it comes to slut shaming, InTouch Weekly wins some kind of bizarro blue-ribbon prize. The March report has suggested that Jolie, who met her now-husband on the set of “Mr. and Mrs. Smith” in 2003, was terrified for months of being the victim of what the tabloid called “what-goes-around-comes-around syndrome.” Pitt was married to former “Friends” star Jennifer Aniston when that film was in production, and the magazine has suggested that an affair would be Jolie’s comeuppance for seducing him. If you’re counting, that’s two slut shames for the price of one.

The actresses’ suspicions were correct, at least according to Page Six. In the wake of divorce papers being filed, the publication reports that Jolie — supposedly driven to madness — had the pair followed by a private eye, who caught them playing bam-bam in the ham on set.

If Cotillard has been waiting in the wings to make like Ty Pennington and wreck the Pitt-Jolie home, she apparently isn’t the only one. Tabloid media has also pointed the finger at Lizzy Caplan, the “Masters of Sex” actress who also appears in “Allied.” The couple’s ever-shifting series of love triangles has previously included Aniston, whose face is splashed on a “Brad Still Loves Jen!” tabloid cover just about every day, and “Inglorious Basterds” star Melanie Laurent. Were every single one of these reports true, Pitt would have no time to act at all. His IMDb page would be a list of seedy motels in Reno, Nevada.

A particularly amusing bit of hearsay has suggested that Pitt is also hung up on Gwyneth Paltrow, his ex-girlfriend and mid-'90s doppelgänger. A National Enquirer story reported that the actor muttered Paltrow’s name in his sleep instead of Jolie’s. Later Pitt was said to have suggested that his wife eat a hamburger to help gain weight — a piece of advice he supposedly read on Goop, Paltrow’s lifestyle website for the rich and vacuous. Jolie was allegedly furious.

Reports suggest that $400 million is at stake in the divorce, which would be a great deal of money to spend over a sandwich.

TMZ has denied the glut of rumors around Pitt’s infidelity, claiming that the problem is his well-documented love of marijuana. “Angelina reached her breaking point last week over Brad's consumption of weed and alcohol,” TMZ claimed, “and combined with what she says are Brad's anger issues.” That could be true or it could be that two human people found themselves pulled apart by conflicting schedules and the demands of raising six children or any number of other marriage conflicts that can't be reconciled. The public treats celebrities as if they are gods who inhabit Olympus. But the reality is that they face the same pressures every other couple does. Juggling the myriad responsibilities of parenthood and long-term commitment isn’t easy.

But if Brad Pitt actually did cheat on Angelina Jolie with Marion Cotillard, Gwyneth Paltrow, Michael Bloomberg’s enthusiastic sign language interpreter, a sexy female sherpa or Barb from “Stranger Things” — and there's no evidence at this point that any of that is true — there’s only one person whose fault it is and it’s not his wife or mistress. It’s his.

Why is it so difficult to hold a man accountable for his mistakes? This is a question that comes up every time a famous man strays from his marriage.

When “Sorry,” the breakout number from Beyoncé’s “Lemonade,” seemed to suggest that Jay Z had had an affair, the Nancy Drew Twitter Detectives went after fashion designer Rachel Roy. In the track, Ms. Knowles sings, “He better call Becky with the good hair.” Roy, who served as the creative director for the rap mogul when his Rocawear line launched in 1996, appeared to reference the song in an Instagram post “Good hair don’t care.”

Actual proof of her involvement was beside the point. Roy — along with singer Rita Ora, Jay Z’s longtime protégé — received numerous death threats on social media for an affair she has claimed she never had. “[O]nline haters have targeted me and my daughters in a hurtful and scary manner, including physical threats,” Roy wrote in a press release.

Added Roy: “As a mother — and I know many mothers would agree — I feel that bullying in any form is harmful and unacceptable. I would hope that the media sees the real issue here — the issue of cyberbullying — and how it should not be tolerated by anyone.”

Monica Lewinsky, the patron saint of other women everywhere, argued that the trouble is not only that mistresses, even alleged ones, are subjected to the threat of violent retribution. It’s also that men get a pass to cheat again and again.

“With every marital indiscretion that finds its way into the public sphere — many of which involve male politicians —it always seems like the woman conveniently takes the fall,” Lewinsky wrote of her 1995 affair with President Bill Clinton in an op-ed for Vanity Fair. “Sure, the Anthony Weiners and Eliot Spitzers do what they need to do to look humiliated on cable news. They bow out of public life for a while, but they inevitably return, having put it all behind them. The women in these imbroglios return to lives that are not so easily repaired.”

She raised an interesting question: Would it have been so easy for Weiner, recently caught in yet another sexting scandal, to have emerged back into public life to begin with if we were not so willing to forgive men? Monica Lewinsky — referred to as a “bimbo” by the Clinton camp, grilled by Barbara Walters about her “nerve” and who considered taking her own life — had to drop out of the public eye for nearly two decades. This was Weiner’s third fracas in five years.

This double standard has a toxic trickle-down effect. When women view men’s actions as blameless, they are more likely to place the burden on themselves. Researchers at University of Texas at Austin surveyed 129 female sexual-assault survivors, finding that 62 percent thought they were responsible for what happened to them — and not their rapist. Instead of viewing the incident as a clear violation of their consent and refusal to recognize their boundaries, many victims blamed their own actions, such as drinking too heavily or wearing clothing that might “invite” unwanted advances. Others pointed the finger at “society.”

Psychologist Brandy Engler has suggested that we’re unwilling to name men’s frailties because it seems easier to force women to suffer for men’s sins. After all, we’ve been been doing it for centuries. “If the public narrative is to put the burden of blame on men, that would make us feel hopeless and sad about men,” Engler wrote in Time. “But if we can villainize one woman, we still have reason to hope — and it provides a collective discharge of angst about our fears of betrayal.”

Even though it might seem to ease our ongoing crisis about masculinity, creating another Becky to toss on a funeral pyre doesn’t help anyone. What took place behind the scenes of Brad Pitt and Angelina Jolie’s marriage is no one’s business, and it’s certainly not the fault of whichever woman the public decides is responsible. It’s about time for men to answer for their own transgressions.