The Fieri-ssance is here: Sorry, Anthony Bourdain — it's no longer cool to hate on Guy Fieri

Guy Fieri is having a moment of unironic appreciation in the press, thanks to foodie culture's poptimists 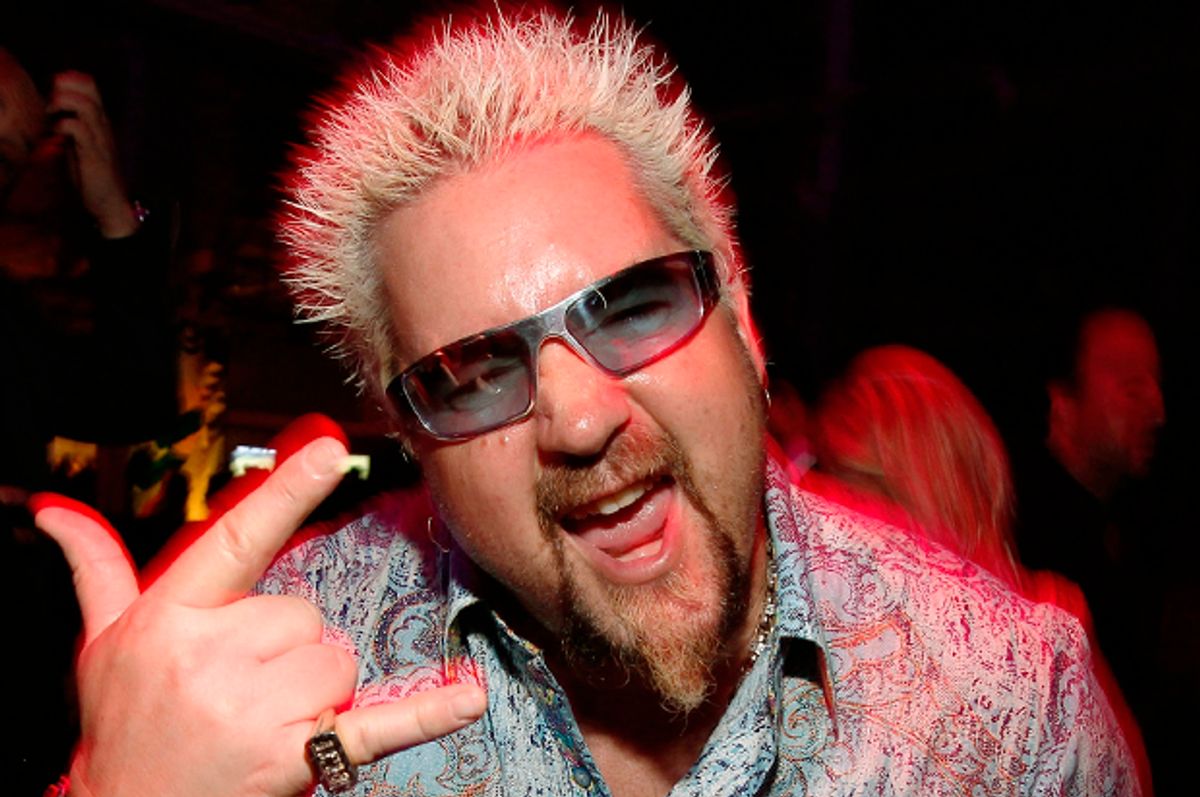 Remember when rock critics — typically more comfortable championing The Velvet Underground, forgotten blues guitarists, and obscure indie-rock bands — began writing apologias for Billy Joel and composed learned deconstructions of Britney Spears? Love or hate what is called poptimism, the impulse seems to be coming to food and restaurant criticism, where Guy Fieri — the celebrity chef that many food insiders love to hate — may be on the verge of an “in defense of” movement. Call it the Fieri-ssance.

Let’s back up. While Billy Joel is disliked by many critics and music fans for strained over-singing and derivative songs, Fieri is disliked for his wild-man behavior and trite, peacock-ish appearance on his Food Network shows like “Guy’s Big Bite” and “Diners, Drive-Ins and Dives.”

Critics have not always been kind to his restaurants either like Johnny Garlic’s or Guy Fieri’s Vegas Kitchen and Bar. In fact, Pete Wells’ New York Times review of Guy’s American Kitchen and Bar, Times Square, addressed to Fieri himself, has become legendary. (“Hey, did you try that blue drink, the one that glows like nuclear waste? The watermelon margarita? Any idea why it tastes like some combination of radiator fluid and formaldehyde?”) Anthony Bourdain, who has developed a large and wide-ranging following by managing to be both macho cool and a elegant writer, mocks Fieri as a culinary clown.

And that’s not even mentioning the reports of live roaches in his restaurants, accusations of sexist and homophobic behavior on the Triple D set or the fight with neighbors over his proposed Santa Rosa, California, winery. When you add it all up, it makes songs like “Movin’ Out” or “We Didn’t Start the Fire” seem benign by comparison.

Well, all of these transgressions may soon be downplayed, as the Fieri-ssance emerges.

It started with the November 2015 issue of GQ, which included an extensive profile on Fieri’s new winery (which produces, apparently, “bomb-ass Pinot”): The writer, Drew Magary, found himself charmed by the chef’s bluster and saw a caring and responsible side (Fieri says “sustainable” a lot) to a guy whose neighbors can’t seem to wait for him to leave.

Magary opened his profile with an anecdote of Fieri introducing him to his pet tortoise, whose favorite delicacy is dog feces. "And if you’re looking for a metaphor of how the food-and-wine establishment views Guy Fieri," wrote Magary, "it’s hard to top a man who feeds dog shit to slow-moving animals and calls it foie gras."

So while Magary was careful to establish the image factors working against Fieri ("He looks like every Sublime fan rolled into one."), he also painted a portrait of Fieri as a devoted cool dad ("It’s gotta feel pretty bawse to roll up to school in a Camaro.") and the mature voice rising above petty criticism. Fieri responded to a question about Bourdain's attacks on him with an empathetic, "I know he’s definitely gotta have issues, ’cos the average person doesn’t behave that way." It added up to a bit of a sly indictment of the superficiality of the haters:

And the interesting thing is that if you close your eyes and listen to Fieri speak, he doesn’t sound so different from the chefs and the foodies who so gleefully despise him. He composts. He hates soda. He doesn’t like hunting. He doesn’t even like fried food all that much (“As soon as you wanna take away the flavor of anything, just fry it”). Ask him about why he started an organic winery, and he’ll launch into a disquisition about how Europeans are so much more enlightened about alcohol consumption. He’ll talk about putting his hands in the soil and making a connection with THE LAND and keeping “lost arts” alive.

In the new Esquire, Jason Diamond made a populist case for Fieri, who champions what he calls “real food for real people.” (“I feel as if I have pretty decent taste by the standards of those strange enough to share them,” Diamond wrote, “yet when I mention that one of my favorite things to do is to sit on my couch with my dog and watch any of the Fieri shows that pretty much make up the bulk of the Food Network's programming, people tend to laugh — or worse, assume I'm hate-watching.”)

While Magary's profile made Fieri sound not so unlike his celebrity chef peers, Diamond made the case for Fieri's unique role in American food culture — a Brooklyn bartender told Diamond, "a lot of us pay our rent because Guy Fieri tourists come here to eat" — positioning Fieri's "Triple D" approach to food discovery as a noble undertaking in its own right:

I also love Anthony Bourdain's many shows and books, and I understand why he'd find a person like Fieri such a personal affront. But while Bourdain looks at the bigger picture on his shows, examining the political economy of every city he visits, Fieri visits the real unknown. He takes that bright red convertible to little spots that are uniquely unexciting, places that aren't owned by celebrity chefs, and parks firmly outside of the hype stream that steers the bastions of good taste.

The groundwork was laid. This week writing about the press preview of a new Fieri restaurant Smokehouse that just opened in a Louisville, Kentucky, tourist mall, Michael C. Powell, a writer for the city's local alt-weekly, scorned those who look down their noses at the chef’s rock 'n' roll style and called himself “an unironic fan and an unabashed defender of Guy Fieri.” Powell suggested it might be self-loathing that fuels a lot of the Fieri-hate:

Guy Fieri is the personification of the outsized American appetite, a totem of the American gastronomy — artificial dyes and all. Guy is the avatar of our collective vision quest, Route 66-style, toward Flavortown — satiating an insatiable appetite in the land of plenty, which includes the buffets, endless apps promotions, State Fair fare, Epic Meal Time recipes, pizza-stuffed pizza and every other slice of Americana, pushing continental cuisine to its gluttonous limit. Guy Fieri is a mirror of what our palate actually looks like — and we don’t like what we see.

So what’s going on here? Critical opinion follows a pretty predictable path. There’s only so much abuse even an obnoxious celebrity can take before someone jumps to his or her defense. In some cases, it's a manifestation of the American urge against snobbery and in favor of underdogs. In other situations (such as when people defend The Eagles), it’s purely opportunistic. When it comes to Fieri, he is also benefiting from the long-practiced tendency of men’s magazines to champion reviled figures for being tougher, cruder, ruder and more ruggedly individual than all those prissy doubters around them.

In any event, Fieri seems to be back in the charming rogue category, and hating on him will quite possibly be seen as beyond passé soon.

Could shifts in media opinion and the way trends get recycled over the decades mean that Fieri’s bleached hair, which makes him look like a cross between Sammy Hagar and a second-string member of Korn, could become cool again? Well, some things may be too tall an order even for the Fieri-ssance.