“Why am I so unhappy?”: "Transparent" enters a season of grief

In a new season of "Transparent," the Pfeffermans come to terms with the lasting side effects of self-discovery 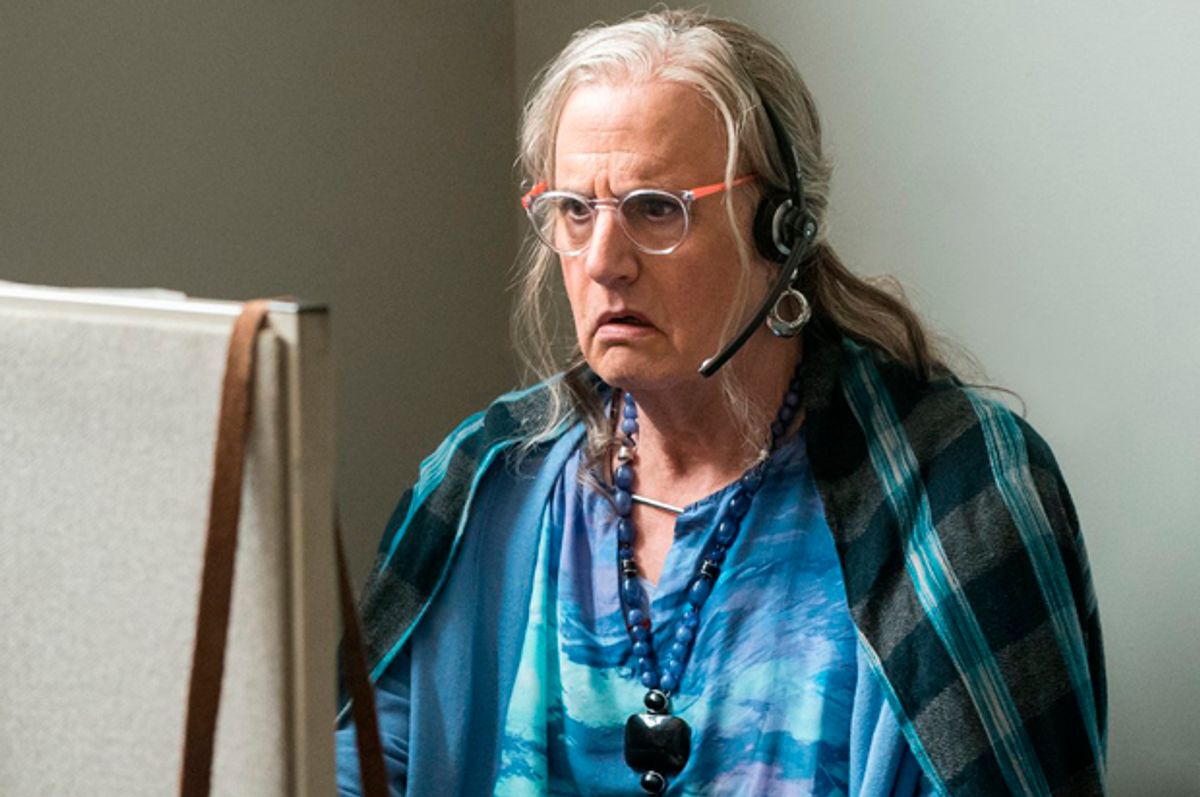 Three seasons into Amazon’s “Transparent,” the children of Maura Pfefferman (Jeffrey Tambor) are still coming to terms with their parent’s transition into a woman. In some sense, that revelation was freeing, pushing each to examine his or her place in the world.

Maura’s oldest daughter Sarah (Amy Landecker) has abandoned her unsatisfying marriage to Len (Rob Huebel) to marry her college girlfriend. After that didn’t work out, she is strugglng to feel . . . anything — even pain, especially pain.

And Maura's son Josh (Jay Duplass) has evaluated his attitudes toward the women in his life, especially the one who used to be his father. He has hinged his hopes on marriage, then a baby; after those were lost, he has discovered he had a teenage son, who also slipped from his grasp.

Ali, Maura’s youngest (Gaby Hoffmann), has honed her focus on grad school, where she has embraced the fluidity of sexual orientation and found a mentor and a romantic relationship in Leslie (Cherry Jones), an uncompromising women’s studies professor. And Maura’s ex-wife Shelly (Judith Light) has let go of any hope to regain her former life partner, moving on to a new and lasting love affair — with herself.

The new season of “Transparent” is available to Amazon Prime subscribers on Friday, and when we pick up the story, Maura, or Moppa as her kids affectionately call her, has relaxed into a supportive romance with Vicki (Anjelica Huston), and Ali and Josh are living at the old family house. In a peaceful moment at her breakfast table, Maura realizes that the relationships in her life have stabilized and concludes that she has everything she needs. But there is no satisfaction in her voice. “Why am I so unhappy?” she wonders.

The answer depends on which version of refrigerator magnet wisdom she would like to live by. Gautama Buddha would say that her unhappiness stems from “not facing reality squarely, exactly as it is.” Blaise Pascal blamed not knowing how to stay quietly in a room. Maura is unable to do either of these things, and that restlessness runs in the family.

“Transparent” started as an exploration of identity, and as we got to know the Pfeffermans, it also became a portrait of narcissism. These 10 new episodes are no less severe in their appraisal of these characters, but creator Jill Soloway also has cast a wider lens on the world around them, showing the audience that their inflated sense of self-involvement is not unique.

Given the opportunity, people can make everything be about themselves. That’s part of the process of getting to the truth about who we are. But personal discovery is a sloppy, uncomfortable process. As we raze the old city that was our identity, sometimes we fail to take into account the other people who knew the layout of that architecture, leaned on those bricks and took shelter in those rooms we made. They might have feelings about our new construction, especially if they liked the old one just fine.

The collateral damage created by exploding one’s identity can be shocking in the immediate, but the toxic emotional fallout can quietly linger for years. And Maura still doesn’t comprehend the extent to which her decision to live her truth has affected members of her family. To be fair, they haven’t come close to grasping it either. Each one is so busy wrestling with his or her own life that one parent’s LGBTQ journey is barely secondary to his or her own personal battles. That they might be grieving such a huge change and upheaval in their lives might not have even occurred to them.

“Transparent” has expanded from its first season's examination of gender identity, and with that enlarged view come some growing pains. Safe in knowing that her series is in no danger of disappearing, Soloway has a right to cash in on the currency she has earned by winning Emmys for Amazon. That she’s doing so by examining the concept of intersectionality, privilege and identity appropriation is a bold move; that she’s one of few producers who can get away with doing so is noteworthy.

But the newest episodes of “Transparent” also display the perils of a producer reveling a tad too much in a show’s baroque period, particularly in the self-referential first episode, “Elizah.” Really, the entirety of “Transparent” is self-referential: The plot was inspired by Soloway’s father’s coming out to her as transgender. But the third-season opener specifically responds to criticisms about Maura Pfefferman's status as an upper-middle class white trans woman in Los Angeles and how her story fails to speak to the struggles facing LGBTQ men and women of color.

Thus, “Elizah” takes the well-intentioned Maura and puts her on a savior’s journey, spurred on by a volunteer stint at a community-service center that goes awry. Maura has problems accepting that some aspects of her life are simply beyond her control, so her quest to make things right is at once believable and completely ludicrous.

It culminates in a quixotic adventure to the Slauson Swapmeet, an indoor mall where, for a time, Maura is completely stripped of the shielding that her money and class usually grant her. The Slauson folks see her as white man with straggly hair wearing a shapeless dress and a busted shoe. She looks like a lost outsider, and they treat her thusly.

Soloway augments this experience by throwing in several classic cinematic symbols — claustrophobic close-ups and wide shots placing Maura against the press of anonymous shoppers, making her sink into the common rabble. Sealing the “between two worlds” nature of it all, it closes with shot of a distressed woman walking down empty train tracks as Nina Simone’s 1965 cover of “Ne Me Quitte Pas” forlornly echoes in the background.

(For pop culture nerds, this is the topping on a fully packed sundae of imagery: Simone abandoned the U.S. in a state of disillusionment over her career and the political tenor of the times. It’s a woman without a country singing in a language that isn’t hers to women who, metaphorically speaking, have no home.)

But that episode is the most artistically adventurous of a third season that, in large part, continues the story of the Pfeffermans’ stifled efforts to mourn the loss of their father even as they love and support their Moppa. Every character is embodying Elizabeth Kubler Ross’ stages of grieving, with Josh mired in depression, and Ali, equally as disconnected from her life, stuck in bargaining. Sarah is tapping into anger, channeling it through her transactional S&M relationship as she watches her ex start dating again.

Shelly, bless her, seems content to backstroke through denial, styling herself as a budding inspirational guru. Maura has traveled nearly all of the steps, but her version of acceptance can be cosmically annoying.

Suffering most this season, at least during the first five episodes, is the family rabbi, Raquel Fien (the excellent Kathryn Hahn), who wants to keep the Pfeffermans at arm’s length but can’t prevent herself for being dragged back in. Since Sarah’s attempts to wear her queer identity hang on her like a misshapen suit, she’s decided to turn her attention to spirituality and runs straight to Rabbi Raquel.

The moment that their budding partnership seems to be working brilliantly, well, the Pfeffermans show themselves to be the Pfeffermans. That Raquel has her own healing to do is secondary to their needs. But interactions with the rabbi and other people linked to the family eventually make them and the viewer aware of their overall carelessness. And in the midst of this, tragedy strikes.

With all these ruminations, “Transparent” maintains its connection to humor and joy, largely with the ample contributions of its guest stars, especially Hahn. And as Ali’s unapologetically mercurial, manipulative lover, Jones spices each episode with crunchy weirdness, while Alexandra Billings’ valuably enlivening portrayal of Maura’s roommate and guide Davina continues to augment Tambor’s highly sensitive work as Maura.

A subplot involving Ali’s newfound discovery of nitrous oxide’s psychedelic effects provides its own entertainment. It also gives the show a reason to bring Caitlyn Jenner on as a guest, because . . . why not? But these are accessories to the primary story engine: the family members’ ability to spark conflict by simply being themselves, which usually translates into their turning their private lives inside out in public spaces and in inappropriate ways. There’s never a wrong occasion for a Pfefferman to somehow make himself or herself the center of the universe, particularly at celebratory events.

But in the world of “Transparent,” when a character drops a bomb at, say, a birthday celebration, everyone knows what to do. There are smiles and silence as each person takes a few beats to process the moment. Soon after, everyone is laughing and playing a childhood game, convincing themselves that it’s OK. Because even if it doesn't feel OK right now, it’s going to be. That’s how family life is supposed to work.