The award-winning director of "Snowden" condemned U.S. warmongering and foreign policy in an interview 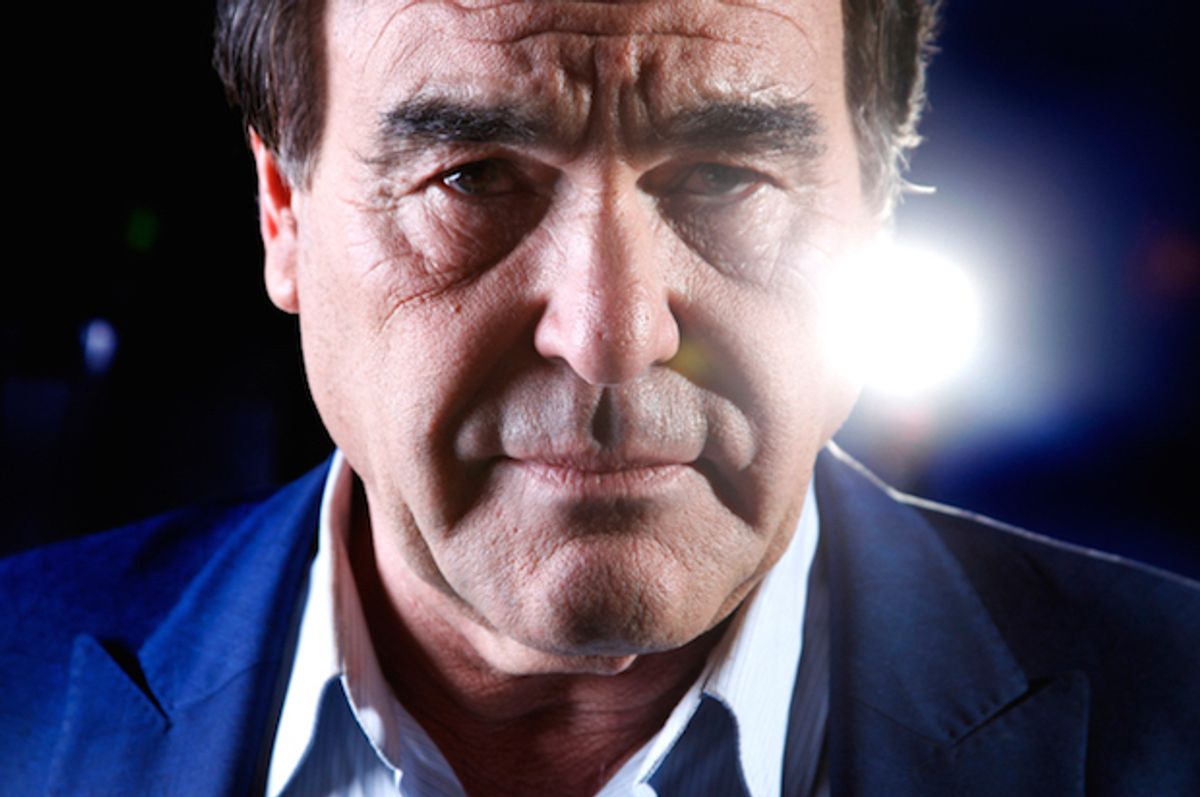 Stone spoke at a small event in New York on Sept. 14, where he blasted the “superficial” U.S. presidential election, the "idiots" in the media and belligerent U.S. foreign policy. He also discussed difficulties in making “Snowden” and applauded whistleblowers for "courageously" exposing lies, as Salon previously reported.

"Democracy Now" host Amy Goodman interviewed Stone at the event, asking him his views on the 2016 election, noting that both the Republican presidential nominee, Donald Trump, and his Democratic counterpart, Hillary Clinton, have heavily criticized and even threatened Snowden.

"It's a superficial election," Stone replied. "I just find it to be irrelevant."

"The sad part is, neither candidate has addressed the surveillance state," he said. "That's the bigger issue. That was the issue that Ed spoke to."

"Nor have they discussed America's wars, nor climate change," Stone added, condemning both of the major-party candidates.

Stone characterized U.S. politics as Orwellian. He compared a scene in his film in which Snowden urges his girlfriend to cover up her laptop camera, to block government surveillance, to George Orwell's dystopian novel "1984."

"One thing about Snowden's leaks that hasn't been discussed enough: He not only exposes to the world this mass eavesdropping and surveillance, but he also brings out the drone warfare," Stone said.

Stone slammed the U.S. media for devoting too little coverage to stories like this, while fearmongering about U.S. enemies.

"When you talk to these people, they're idiots, some in the media," Stone said. (When a Huffington Post reporter began asking him a question, he joked, "Don't misquote me, please.")

An editor at Harper's magazine asked Stone about James Risen, The New York Times reporter whose exposé on the CIA was shot down by his editors, under pressure from Condoleezza Rice, a former national security advisor.

Stone pointed out that the U.S. newspaper of record had published the revelations of Pentagon Papers whistleblower Daniel Ellsberg in 1971. "Ellsberg's story was accepted by The New York Times in those days," he said, adding that the Risen case is a "very sad indictment" of the Times' modern leadership.

Stone warned that increasingly aggressive coverage of countries like Russia and China in the U.S. media helps to sell war. "Every time a war is started, The New York Times has been right there in the forefront, leading the charge. They're building up another one with this 'cold war.' It's really ugly," he said.

Stone blasted media reports implying that Russia was behind the recent hacks of Democratic National Committee computer systems, without any solid evidence. "They talk about the Russians 'breaking into the DNC.' It's crap; they don't know," he said. "There has been no statement pointing out specifically that they did this. It's easy to say, 'possibly,' 'suggests,' all that crap.

"It takes the story away from the hack itself, which is about officials at the DNC doing illegal things against Bernie Sanders," Stone stressed. "That's why they resigned because they were fucking guilty as sin," he added, to applause.

Stone observed how during a recent TV interview he had discussed that the DNC had sabotaged Sanders' campaign only to have the host dismissed his comments as a "conspiracy" theory. "Come on, talk about what happened: Bernie Sanders and the DNC — that's a story!" Stone exclaimed. "It's not about the Russians. This is impossible to prove, but they keep making these accusations. This is where the next war is going to come from."

The filmmaker also said he is unable to get mainstream media coverage for some of his especially political films.

"You can't get out in the media unless you have a show like Amy's," he lamented, referencing Goodman's program "Democracy Now."

"PBS even kept me off the air after the Chávez documentary," Stone said, referencing his 2009 film "South of the Border," which featured Venezuela's former president Hugo Chávez. "They were so angry, they were so anti-Chávez that when I did [my TV series] 'An Untold History of the United States,' I couldn't get a booking except on Amy."

For that 10-hour documentary series, co-written with historian Peter Kuznick, Stone said he "could not even get a booking for National Public Radio," adding "There's something wrong in that. That happens because there is a media that basically makes so much money off of consumerism."

Stone accused major U.S. media outlets of spreading public ignorance. "The hardest part is, How do we educate people because they have been kept willfully ignorant?" he asked. "It's much better to keep running ads on TV that are about consumerism and to show them programs that don't challenge them in any way to question or even to feel angry," he said.

In the interview, Stone also stressed the importance of people learning about U.S. history. He said this was one of the reasons he devoted so much time to creating "An Untold History of the United States."

"From World War II we see this acceleration," Stone said. "We never gave an inch of ground after World War II. We kept every base, and we built more bases. We have 800 bases — we don't know exactly how many. We have secret bases all over the world. We have the military-industrial-security complex beyond measure. And yet we call for more and more," he added.

"History in America is not studied," he continued" "It's Disney World. That's what you're getting, sanitized history. That's why kids turn off. They know better because kids love stories about big, bad wolves and horror shows. So make history what it is: gritty and colorful and dangerous, and they will come and listen to history."

As Vietnam War veteran who has directed numerous films about international conflicts, Stone is especially critical of U.S. foreign policy.

Salon asked Stone about "South of the Border," his documentary on the Pink Tide, a trend of left-wing governments winning elections throughout South America. In the past two years, the Pink Tide has been beaten back, with right-wing opposition parties, many of them backed by the U.S., taking over — sometimes electorally, and sometimes by undemocratic means.

Stone, who said he felt optimistic about Latin American politics several years ago, is now worried. He condemned the ousting of Brazil's left-wing president Dilma Rousseff in August by a group of unelected right-wing opposition leaders, calling it a "coup."

He also applauded journalist Glenn Greenwald's reporting on Brazil for the The Intercept, a site he co-founded to feature Snowden's leaks. (Greenwald shared a Pulitzer Prize for reporting Snowden's revelations to the world.)

Stone compared the soft coup in Brazil to the similar ousting in 2012 of former president Fernando Lugo in Paraguay — a figure who was also featured in "South of the Border." Stone recalled, "He was a liberation priest in Paraguay. They got rid of him."

The unelected right-wing President Michel Temer who replaced Rousseff "was supported heavily by the Brazilian media," Stone said. "This goes on all over Latin America."

The late Venezuelan president Hugo Chávez was targeted by similar media smears, Stone pointed out. In Venezuela, "the media is controlled and owned, for the most part, by the oligarchs, who lobbied heavily against the president," he said.

"The United States has been very aggressive against Venezuela," he continued. "There were a hundred stories in The New York Times; every one of them, I don't remember one positive thing they ever said about Chávez."

Today, Stone said, the U.S. is "doing everything possible to get rid of" Venezuelan President Nicolás Maduro, who succeeded Chávez. The U.S. backed a 2002 coup that briefly overthrew Chávez and continues to support Venezuela's right-wing opposition, he added.

"Honduras was Hillary's job," Stone added, referencing the U.S.-backed military coup in Honduras in 2009, which ousted left-wing president Manuel Zelaya. As secretary of state, Hillary Clinton had "supported the coup, which was a horrible thing for Honduras — everyone agrees on that — and ended up sending tons of refugees into this country," he said.

This is true of Ukraine as well, Stone continued. He accused Western media reports on Ukraine of bias. News outlets reported very positively on the 2014 protests that toppled the government, while downplaying the violence used by protesters, who killed police, he noted. Media reports also downplayed the influence of far-right, fascist groups like Right Sector in the protests.

These destructive policies are not new, Stone emphasized. "It's been this way. So I am suspicious, highly suspicious — and you should be too," he told the audience.

Goodman concluded her interview by asking Stone what accomplishment during his 70 years he is proudest of. "The body of work is what I've been after for years and expanding my knowledge and consciousness through each movie," he replied.

"I may have done a Vietnam movie, but I didn't understand the bigger picture, and I was always looking for that. Presidents, and then ultimately the Wall Street pictures, pushing on to South America, made a big difference to me," Stone said.

He continued: "Going back after the Vietnam War, I was not more enlightened; I was puzzled. Going back to Central America in the 1980s and seeing the disaster that was down there, with the United States participating in the Contra war, that really made me realize that this cannot go on."

Many veterans of U.S. wars "come back with the same issues," Stone said, noting the prevalence of post-traumatic stress syndrome,. "It's like you've been fucked and you don't know it," he joked.

“I’m still angry,” he said. But that's a good thing, he argued. "Anger against the present conditions is the key to any successful revolution. And I want to have hope. There's hope every day." Stone said.

"Please don't give up," Stone told the audience. "Keep your ideals. Without them you'll become cynical."