Mike Pence, a heartbeat away from the presidency? Now that's frightening 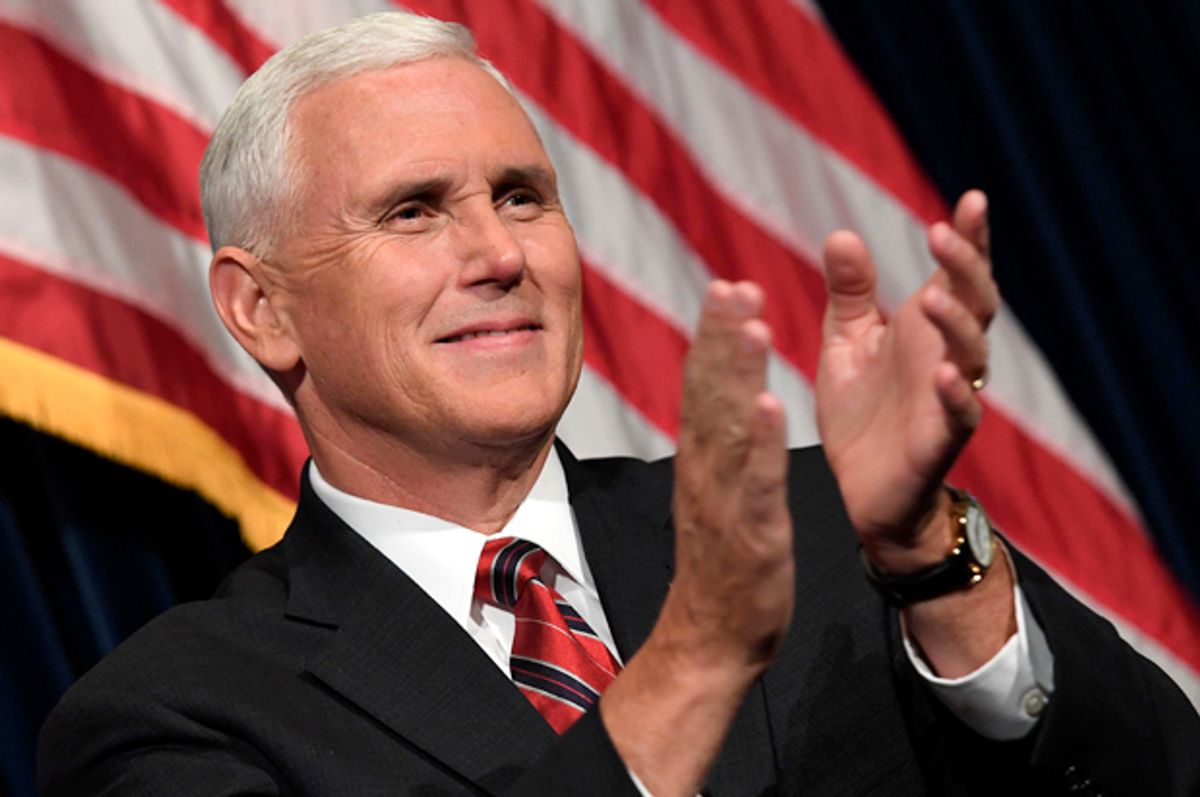 Why isn’t Mike Pence a major issue in this campaign?

In any other election, Pence would be to a Republican presidential nominee what Sarah Palin was to John McCain back in 2008 — that is, an extreme right-winger whose presence on the ticket is widely regarded as a liability. Of course, this is the year in which the GOP tapped Donald Trump to be its standard-bearer, and when the main attraction is that prone to controversy, it makes sense that anyone running with him will wind up being more or less ignored by the media.

Considering that Donald Trump is as dangerously close as ever to winning the presidency, though, we need to pay close attention to his running mate, particularly since Pence has said he'd like to model his vice presidency after Dick Cheney, one of the most "consequential" No. 2's in history. Needless to say, if Trump becomes president, Pence’s opinions will matter … and those views are, upon closer inspection, chilling.

While it’s easy to point to Pence’s extreme positions on a wide range of issues — from climate change and evolution (where he is anti-science) to trade policy (where he's a staunch free trader, putting him at odds with Trump) — Pence has defined his political career by his hatreds.

Most conspicuous among these is his animus toward the LGBTQ community. This was most recently made evident by his support for and signing of the notorious Indiana Religious Freedom Restoration Act — a bill that, under the guise of protecting religious liberty, established loopholes that allow businesses to discriminate against gays and lesbians. But Pence’s LGBTQ bigotry goes much deeper than that. Back when he was a Hoosier congressman, Pence opposed funding legislation to combat AIDS on the grounds that the money could be better spent trying to "cure" homosexuality. As governor, before the Supreme Court made marriage equality the law of the land, Pence signed a law making it a felony for gay couples even to apply for a marriage license. All this, of course, occurred on top of Pence's predictable anti-gay positions on matters like hate-crime legislation or repealing “Don’t Ask, Don’t Tell.”

Pence’s record on race is hardly better. Back when he ran for Congress in 1990, Pence used a fear-mongering campaign ad that criticized American dependence on foreign oil by grotesquely caricaturing Arabs; six years later, he defended Pat Buchanan on his radio show as someone who should not be considered outside the mainstream of the Republican Party. (In case you've forgotten, Buchanan sympathizes with fascism so openly that Donald Trump himself once called him out on it.) Pence’s race-baiting was not limited to the '90s. Check out his suppression of minority voters in Indiana or his recent refusal to denounce neo-Nazi leader David Duke as deplorable. Pence may claim that Martin Luther King Jr. is his personal hero, but his actions would seem to contradict those words.

Finally, there is Pence’s attitude toward women. If his career-long commitment to defunding Planned Parenthood isn’t enough to convince you that he has a problem, how about his 1997 editorialproclamation that working mothers stunt the emotional growth of their children, or his 1999 article denouncing the Disney film "Mulan" as “liberal propaganda”?

There's also Pence's (thankfully unsuccessful) effortto allow federal funds for a post-rape abortion only if the rape was “forcible,” or his support of an Indiana law mandating investigations of women to see if they caused their own miscarriages, and requiring women to bury or cremate miscarried fetuses. Perhaps most tellingly, even though Pence used his radio show to express outrage at a female Air Force pilot for cheating on her husband, he didn’t bring up Bill Clinton’s marital infidelities until his listeners prompted him. Even if you believe someone can be anti-abortion without being anti-woman, it’s difficult defend Pence’s stances on issues like these without crossing the threshold into misogyny.

Again, these positions are not mere blips in Pence’s background. They are the foundation of his political career, from the campaign messages he’s used to win votes to the policies he’s supported once in office. As such, they offer a reliable indicator of the attitudes Pence would bring with him if the fates conspire to make him president. As the running mate of a man plagued by scandal who would be the oldest incoming president in our history, it isn't much of a stretch to imagine impeachment or mortality elevating Pence to the highest office in the land.

That’s why we have a responsibility to draw attention to Pence’s record and his evident prejudices, just as we’ve done with Trump’s long history of sexist and racist remarks. By not holding Trump’s feet to the fire for choosing a running mate with Pence’s extreme positions, we normalize those stances instead of shuffling them to the margins of political discourse where they belong. Even worse, instead of allowing the American people to make an informed choice about such a controversial figure, we have created an environment in which polls suggest that nearly half the public doesn’t know enough about the man to form a first impression.

Of course it’s possible that Trump would win this election even if Pence’s views were as widely understood as Sarah Palin’s were in 2008. That said, it’s difficult to believe that Pence’s background wouldn’t at least become a major factor. It's clear that whenever he's been entrusted with power, Mike Pence strive to turn back the tide of progress made over the last few decades in terms of social justice for racial minorities, women and the LGBTQ community. He may not be as flamboyant as Trump, but he is just as dangerous, and most mainstream journalists covering this election have simply looked the other way. We have less than seven weeks to correct this.