Yeah, there's a difference: Wells Fargo scandal is another reminder that we can't afford Trump and the GOP

Trump has promised to destroy the agency that uncovered Wells Fargo's abuses; Clinton has vowed to bolster it 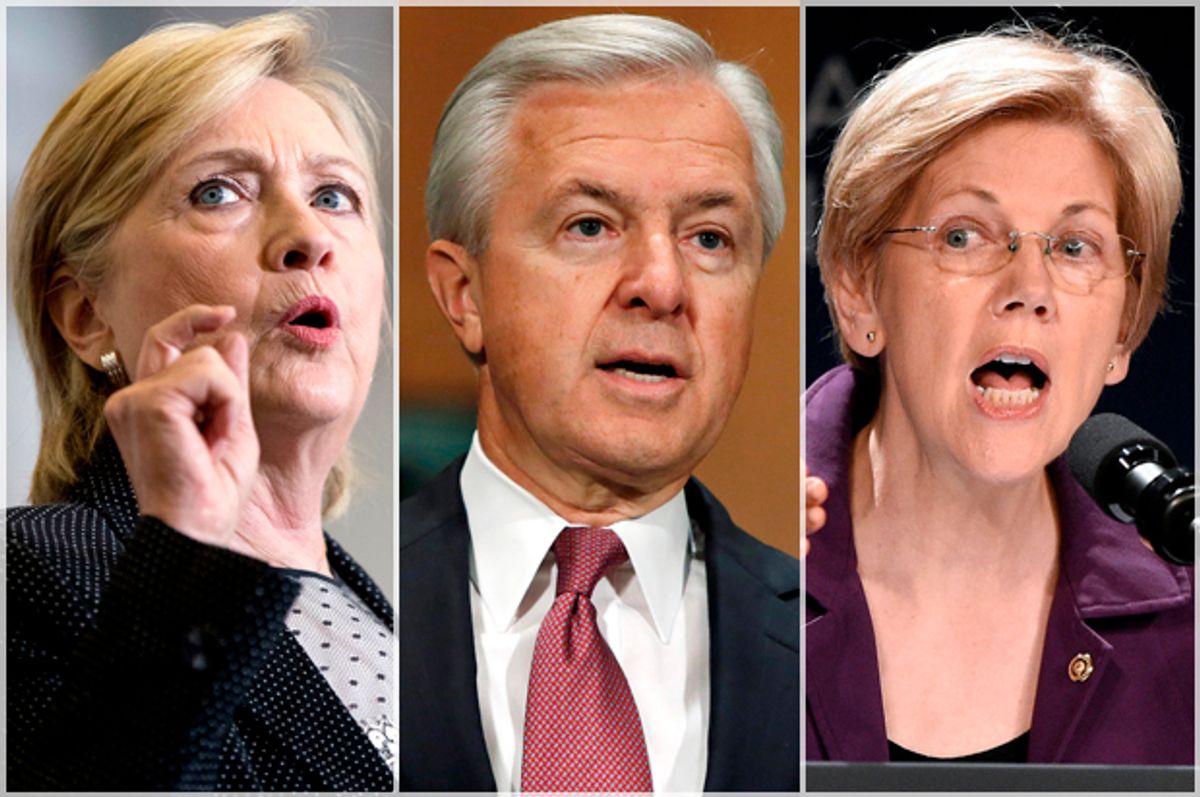 Even as Republicans were striking poses of outrage during Tuesday's Senate hearing over Wells Fargo's abuses of customers, they were pushing for measures that would terminate the federal government's ability to root out bank abuses — like the ones discovered at Wells Fargo.

But Republicans want to kneecap the agency, even though in its five-year existence it has returned nearly $12 billion to victims of the financial industry's malfeasance. Despite its high-profile victory over Wells Fargo, Republicans are still looking for excuses to destroy an agency that protects consumers and helps prevent some of the exploitative banking practices that led to the financial collapse of 2008.

"Generally speaking, Democrats have been staunch defenders of Dodd-Frank and the CFPB," Joe Valenti, the director of consumer finance for the Center for American Progress, told me over the phone.

If you look over the past few congressional budget bills, he continued, "every single year, the Republicans have had some kind of measure that would weaken the CFPB." He explained, "Some would take away its independent budget. Some would turn it into a commission. Some would block it from going after payday lenders or auto lenders or other types of predatory lenders."

In June Republicans unveiled a plan to repeal the Dodd-Frank law and replace it with legislation that would defang the CFPB, making it the only bank regulator without independent funding. In other words, Republicans want to restructure the CFPB so they can quietly bleed it dry, making it an agency with no real enforcement power to protect consumers against predatory bankers.

Republican presidential nominee Donald Trump has promised that, if elected, he plans to dismantle Dodd-Frank altogether. Under his leadership, Republicans might skip the budget games altogether and simply eradicate the CFPB, which would give banks like Wells Fargo winking permission to return to unrestrained exploitation of their customers.

In contrast, Democratic presidential nominee Hillary Clinton has been vocal in her support of the CFPB:

"The unfair and abusive practices at Wells Fargo remind us that we need tough watchdogs looking out for customers," Clinton wrote in an open letter to Wells Fargo customers. "The CFPB worked with local authorities and enforced the law — assessing its highest penalty ever, and bringing the bank’s illegal activity into the national spotlight." She promised not to let Republicans "put the CFPB under their thumb."

Clinton has also proposed sweeping expansions of existing powers — ones that would make it harder for banks like Wells Fargo simply to pay their fines and return to business as usual.

During Tuesday's Senate hearings, Republicans continued to make disingenuous arguments, trying to portray the CFPB as a poorly managed organization that needs to be restructured.

During his opening remarks for the Senate Banking Committee hearing on the Wells Fargo fiasco, Sen. Richard Shelby, R-Ala., kept trying to pin blame for what went wrong on CFPB regulators.

"How many millions of unauthorized accounts does it take before the CFPB notices?" Shelby said.

Shelby neglected to mention that if the Republicans got their way and CFPB were disempowered, the answer would be, "Who knows?" There would be no government agency tasked with investigating and putting a halt to Wells Fargo's abuses in the first place.

"Finally, where were the federal regulators while certain Wells Fargo employees were taking advantage of unsuspecting customers over a period of many years?" Shelby went on.

One way to get rid of slow investigations, of course, is to make sure there are no investigations at all, much in the same way that death is a surefire cure for cancer.

The House Financial Services Committee hasn't even bothered to hold its own hearings about this. When a reporter confronted a spokesman for Rep. Andy Barr, R-Ky., who serves on the committee, he blamed the regulators themselves: "It is ironic that supporters of Dodd-Frank claim the law protects consumers, when this alleged fraud occurred after the law went into effect."

In a sense, it's the same logic that Shelby is employing. It is technically true that one way to stop hearing about all the lawbreaking is to get rid of the people who actually catch the criminals. But putting the abuses in the closet does not stop them from happening, as much as Barr might like to think otherwise.

Most of the coverage of Tuesday's hearing focused on how awesome Sen. Warren is, and what a sleazemeister Wells Fargo CEO John Stumpf is. Which is great, as it is clearly true that Warren is a badass and Stumpf is a monster.

But the hearing should also serve to remind us of the vast differences between the two parties and their respective presidential candidates, especially with regard to regulation of the financial industry.

To keep banks from destroying people's lives, we need the CFPB and the Dodd-Frank law. Trump and the Republicans want to get rid of both. Clinton and the Democrats want to protect and even strengthen both.

There are countless reasons to fear a Trump ascendency to the White House. But not least among them is the fear that he, with the assistance of congressional Republicans, will lay waste to the economic regulatory system built up under President Barack Obama, just as it's starting to work to make our economy secure again.

Updated: This article has been updated with direct quotes from the Consumer Financial Protection Bureau.