Fast food companies tried the healthy route and failed, now there's nowhere left for them to go but upscale 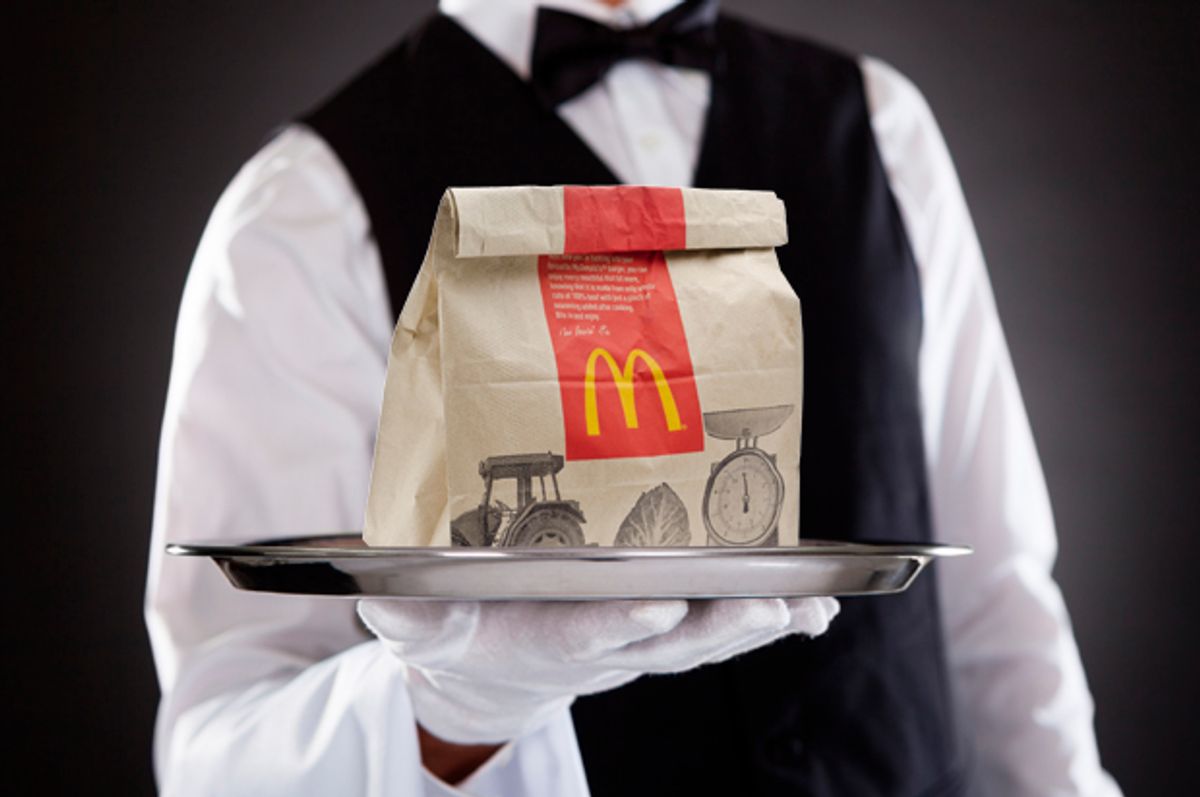 For decades, fast-food restaurants were a mainstay of the American eating experience to such a degree that the McDonald’s Golden Arches were as much an indelible symbol of the United States as Lady Liberty.

But in recent years the industry founded on the quick burger-and-fries concept is facing tough times. It’s not just that Americans have become more health conscious; they’re also inundated with so many choices that companies are fighting for ways to distinguish themselves within a landscape of brightly colored signs dotting every commercial avenue and highway of the nation.

“The major brands are in a share war,” Larry Light, CEO of the consulting firm Arcature and McDonald's global chief marketing officer from 2002 to 2005, told Salon. “When there’s a rising tide they can rise together, but now it’s a battle for market share.

Added Light: “Plus there’s increased competition from the so-called better burger category and you also have new varieties of brands and new categories like two-minute customized pizza. It’s a much more competitive world.”

Today, consumers have an overwhelming amount of choices, with fast food offerings ranging from the fare of older stalwarts like Burger King and McDonald’s to that of more recent entries like Chipotle Mexican Grill and Shake Shack. The newcomer firms are smaller and have lured customers with fresher ingredients and a perception that their food is better, fresher and less processed. This has forced the traditional big brands to find ways to lure customers back to their stores with new offerings. And this drive for innovation is sending the companies into areas that some say they have no business occupying: First offering healthier fare and now serving "upscale" food.

But the effort by big fast food companies to add upscale ingredients is borderline heresy for some industry watchers.

“If I’m going for high-end food or something exotic I’m not going to McDonald’s or Wendy’s,” Harold Kestenbaum, a franchise lawyer and former executive at the pizza chain Sbarro, told Salon. “I don’t know what’s going in their heads and why in the world they would even try that kind of thing. I don’t know if it’s desperation or what.”

Last year McDonald’s overall global sales fell 7 percent to $25.4 billion, according to its last annual report, while Wendy’s reported a global sales decline of 6 percent to $1.9 billion in 2015.

Right now Wendy’s and McDonald’s are grappling with anemic growth in same-store sales, an important retail measure that gauges traffic to older restaurants.

Overall, the number of restaurants in the U.S. fell by 1 percent in the first three month of the year, according to a report this week by industry tracker NPD Group, citing “stalled traffic growth experienced by the foodservice industry over the past several years.”

Ravi Dhar, director of the Center for Customer Insights at Yale University, said efforts by big fast food companies to change up their menu items – as well as introducing antibiotics-free meat into their supply chains – is an effort to improve the perception of fast food in the minds of younger Americans.

“The launch of more upscale menu items will go a long way in slowly updating the beliefs millennials have about these establishments,” Dhar said in an email to Salon. “It's not only about a market for these new premium items but can they change the overall perception” of the industry?

These giant fast food companies have lost their way and need to recognize themselves for what they are: massive operations focused on speed, consistency and low prices. “The core idea of McDonald’s has been convenience, good taste, fast, friendly and accurate,” Light said. “When I think of McDonald’s do I think of pesto cream cheese, baby spinach, kale and sliced mozzarella? Not only does this increase menu complexity, it increases operational complexity, it slows down services, increases the odds of an error in the order, and it confuses the brand.”

And that's not even considering the question of whether the food tastes any good. Probably because we all know the answer.