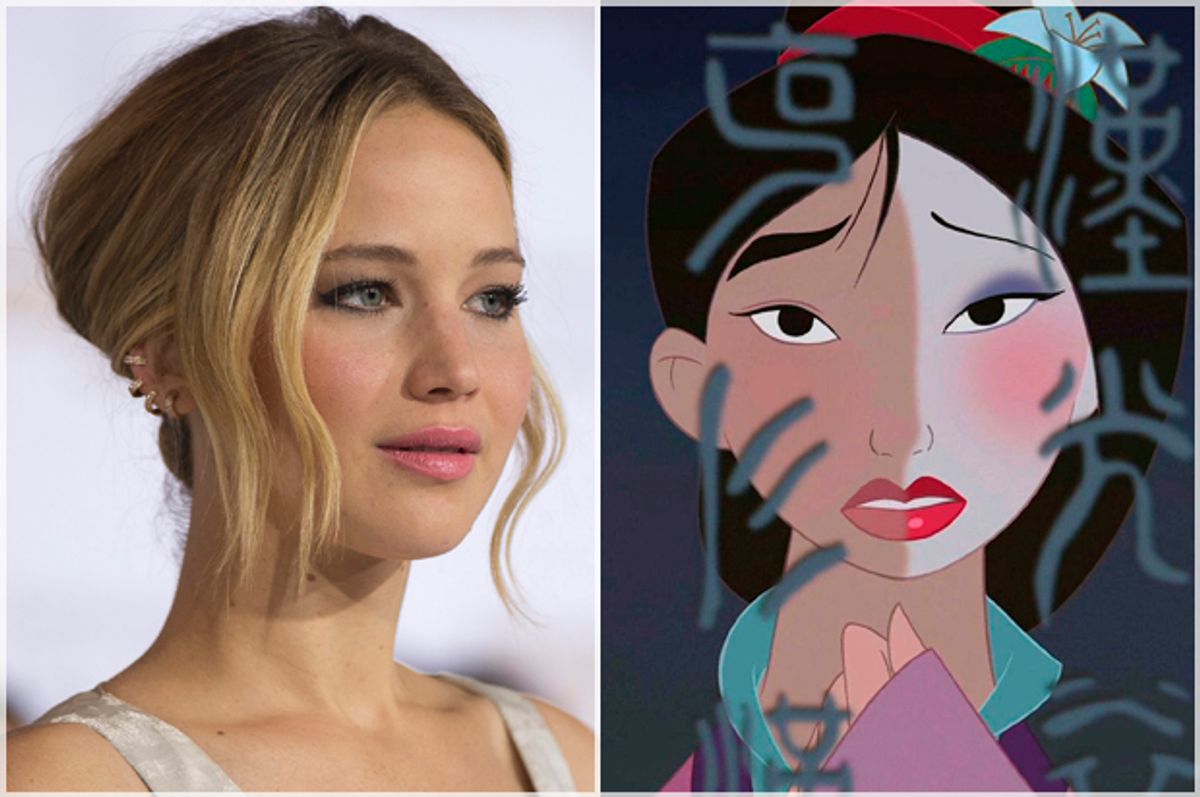 It’s the rumor that won’t die. Will Jennifer Lawrence be cast as Fa Mulan in the planned live-action version of the beloved animated film, with Zac Efron playing “Disney’s hottest prince,” Captain Li Shang, standing by her side?

Unreel News is a parody account, but Facebook Nation and the Twitterverse weren’t taking the casting of J-Law and Zac as a joke. On Care 2, a petition asking the studio to cast an Asian actor as Mulan is closing on 100,000 signatures.

Casting a Caucasian actor as a character of color, regardless of reason (“Oh, we just want a big name attached to this movie”, “Western audiences won’t watch a movie about Asian people”, etc.) has a direct, harmful impact on not only the movie itself, but the audience, as well as POC members of the acting community.

The Disney generation has good reason to be worried, because they’ve seen nothing but white superstars cast as Asian characters in major motion pictures. There’s Scarlett Johansson as Major Motoko Kusanagi in "The Ghost in the Shell"; Elizabeth Banks as Rita Repulsa in "The Power Rangers"; Tilda Swinton as The Ancient One in "Dr. Strange"; Mackenzie Davis as Mindy Park in "The Martian"; Emma Stone as Alison Ng in "Aloha"; Finn Jones playing marital arts expert Iron Fist in the eponymous Netflix series; Robert Pattinson, James McAvoy, Chris Pine, and Michael Fassbender for the proposed film adaptation of the Japanese anime "Akira"; Tom Cruise as Keiji Kiriya (renamed William Cage) in "The Edge of Tomorrow," based on a Japanese novel; Jim Sturges as real-life MIT student Jeff Ma in "21"; Justin Chatwin as Goku in "Dragonball-Z" and the whitecasting fiasco of "Avatar: The Last Airbender."

Go back in time and there’s John Wayne as Genghis Kahn in "The Conqueror," Mickey Rooney as Mr. Yunioshi in "Breakfast at Tiffany’s," Marlon Brando as Sakini in "The Teahouse of the August Moon" and dozens upon dozens more examples. Against this shameful backdrop, casting J-Law and Zac as ancient Chinese warriors makes perfect Hollywood sense.

You don’t need to be the King of Cultural Sensitivity to notice something else going on inside that list. "Aloha" excepting, they’re all adaptations of beloved Chinese folktales, bestselling Japanese mangas, and wildly popular graphic and regular novels predominantly Asian in origin, themes and location. It’s one thing to come up with an original story and leave out people of color because you don’t know any in real life. It’s another thing entirely to take a different culture’s most cherished traditional tales, and retell them starring yourself the good guy, the romantic lead and the hero. This is cultural colonization, a phenomenon aligned with but distinct from the White Savior trope, which is embedded in the history of white male Christian missionaries making heroic expeditions to “heathen” lands in order to save souls.

But this is the 21st century, and entertainment is the new opiate of the masses. China’s economy now rivals the U.S. as the world’s largest, and it’s projected to soon generate more ticket sales for Hollywood films than the U.S. domestic box office. Curious hybrids are emerging from the inevitable mating of superpowers — namely big budget, Chinese-produced films starring a cast of Chinese thousands and a lone American male: Matt Damon in the historical fantasy "The Great Wall" and Bruce Willis in the Chinese-language WWII epic "The Bombing." (Bonus: Mel Gibson is the art director!) The standard apologia for casting white action stars in Chinese epics is that Damon and Willis have bankability and star power, thereby broadening their films’ appeal to foreign box office, i.e. the U.S. By the same token, then, shouldn’t American producers be scrambling to make films starring the biggest actors in the world, like Shah Rukh Khan at no. 1 (based on followers, fandom, influence, and profitability) and Fan Bing Bing, who is no. 5 on a 2016 list of the world’s top earning female actors? Will we soon be seeing an American Civil War epic with Shah Rukh Khan as an Army surgeon forced to take up arms and lead an impossible rescue mission, or a drama set in 17th-century Salem with Fan Bing Bing discovering she’s not only a witch, but a vampire?

That such films are currently unthinkable begins to explains the seeming paradox of Hollywood (and publishing’s) rejection of stories written by Asian-American authors with Asian and Asian-American main characters. Investors will certainly lose money, the businessperson thinks, because they will have no crossover appeal back to Asia’s lucrative market, resulting in the strange situation where being Asian American means being too American for Asian audiences, and too Asian for white Americans. Frustrated by this Catch-22, YA author Cindy Pon tweeted this past May: being #whitewashedOUT means “being told point blank when shopping for dramatic rights that hollywood has no interest in what i write because ASIAN.”

As far as Hollywood is concerned, whitewashing is not a bug, but a feature. The roles featuring actual Asian actors are so few and far between that director Yulin Kuang tweeted: “The ‪#threefictionalcharacters meme is a fun reminder that I can barely scrape together 3 Asian American female characters across film/TV.”

Along similar lines, Alan Yang tweeted after winning an Emmy for the comedy, “Master of None”: “…Now let’s go out there and make one Asian-American movie star. One!”

Their sarcasm is as bleak as the prospects of Asian American actors hoping to find work. Lately, Hollywood’s neurotic insistence on casting white actors to play Asian roles has become positively surreal. Instead of being banished, whitecasting has gotten creatively weird. There’s the white voicecasting of the Japanese tale, Kubo and The Two Strings; an animated version of pop singer Gwen Stefani’s Harajuku girls which makes them into…well, it’s difficult to say, but the “girls” are not legibly Japanese; the white voicecasting of the Chinese animated film, "Little Door Gods," to be released in the U.S. as "The Guardian Brothers" (“it is unclear if Streep…and Kidman will adopt Chinese accents for this film”); and an upcoming biopic about martial arts legend Bruce Lee, who is played by Philip Ng (whew!), but then it turns out that the story isn’t about him. It’s a “coming-of-age story involving a rough and tumble young white man” who falls in love with the wrong girl.

How does a writer twist a storyline built around one of the most charismatic Asians stars of all time into a love story starring a random white guy? More importantly, why?

The deeper cultural logic is this: As far as the politics of representation are concerned, Asian-American stories don’t do the political work of turning the rest of the world into Hollywood USA. By contrast, this work is handily accomplished by taking Asian stories and selling them back to Asia. But first, they must be revised to star white actors as the narrative centers, all the while homogenizing cultural differences into a soothing capitalist landscape. And so critics and audiences may be pissed, but not surprised, if Jennifer Lawrence and Zac Efron end up starring in Mulan, singing without irony: “Why is my reflection someone I don’t know?”