House Democrats and Republicans united to attack Mylan CEO Heather Bresch, but no one is acting to fix the problem 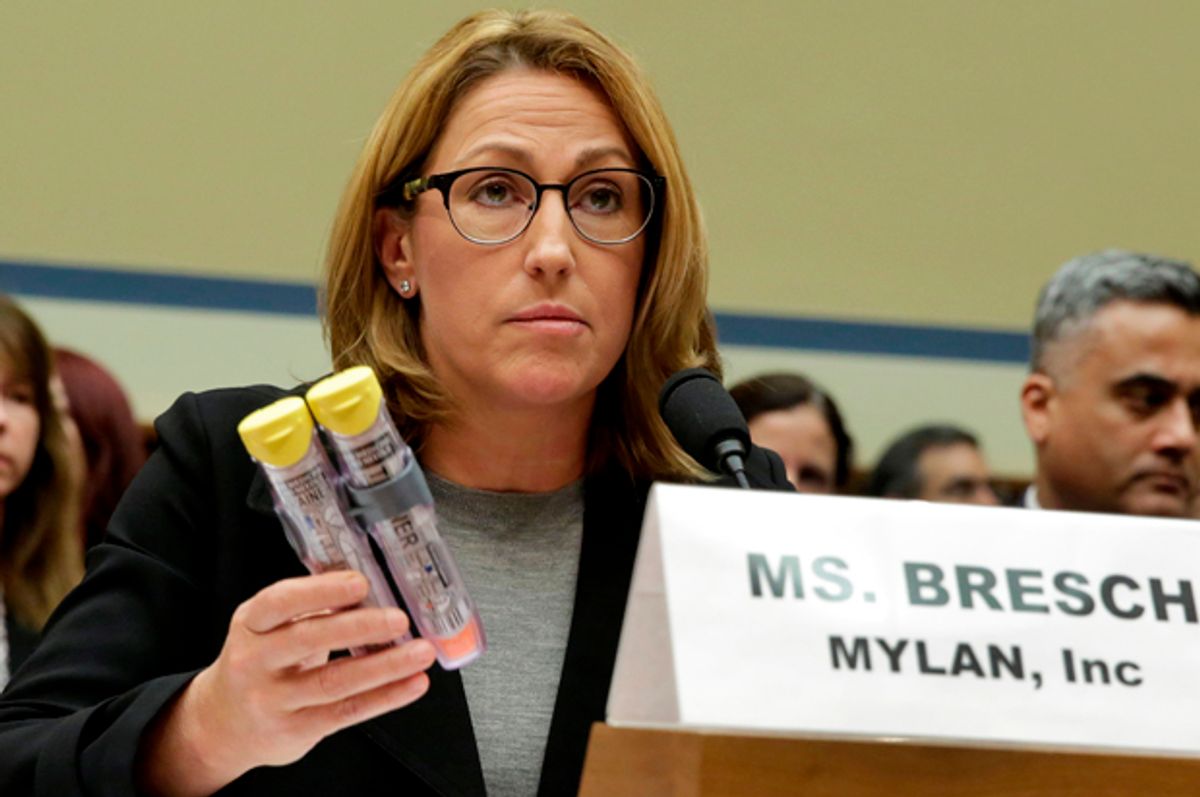 Drug manufacturer Mylan’s CEO Heather Bresch, whose name became well-known last month after revelations that her company had jacked the price of its life-saving EpiPens 600 percent over the last nine years, went to Capitol Hill on Wednesday to answer questions from the House Oversight and Government Reform Committee about the price hike.

It did not go well for her.

Granted, one reason that Bresch earned poor reviews for her performance is that members of the committee were sometimes more concerned with grandstanding and badgering while not seeming to understand her answers, like Rep. Jason Chaffetz (R-UT). But Bresch’s father is Senator Joe Manchin (D-WV), who has been an elected politician at one level or another since 1982. So presumably she had some idea what she was in for.

Chaffetz was not the only member of the committee to get in some licks. Rep. Elijah Cummings (D-MD) also had some harsh words for Bresch, and the general consensus afterwards was that lawmakers on both sides of the aisle had been very tough on her. This came on the heels of the grilling that Wells Fargo CEO John Stumpf took on Tuesday from members of both parties in a Senate committee hearing over recently uncovered fraud affecting millions of customers of the bank. Bipartisanship!

I am nowhere close to being optimistic that this signals a new comity on Capitol Hill which will result in addressing, say, the underlying flaws in the nation’s healthcare system that result in drug-company CEOs getting obscenely rich on the backs of the middle class, or other issues such as the federal budget. But maybe I’m wrong and there is reason to be hopef...oh wait, no, we are still on track for a government shutdown at the end of the month because the parties in Congress can’t agree on a bill to keep it funded and operating.

But the major reason that the hearing went poorly for Bresch is because there is simply no justifying the extreme price hike for the EpiPen. Not when the increase has helped your company go from net profits of $184 million in 2008 to an estimated $1.1 billion in 2016. Not when your total salary and compensation have gone from around $2.5 million when you were the company president nine years ago to almost $19 million as the CEO in 2015. Not when you guided your company through a corporate inversion, that neat loophole that allowed you to re-incorporate your entire company in the Netherlands to dodge paying U.S. taxes, even though your entire infrastructure remained here.

In a vacuum, there is nothing wrong with a company making profits, of course. But those profits came at the expense of Mylan’s customers, the middle and lower-class citizens who have struggled for years to keep up with the rising cost of the EpiPen. Since the device delivers a dose of epinephrine to patients suffering life-threatening allergic reactions, and since such a reaction can happen without warning, going without an EpiPen nearby is not a viable option. Additionally, since epinephrine degrades quickly, people have to replace unused pens every year.

It is a neat monopoly the company has carved out for itself, especially since competitors developing generic versions of the drug have for one reason or another been forced out of the market.

As a sop, Bresch announced that Mylan is putting out its own generic EpiPen that lowers the wholesale acquisition cost from $600 to $300 per two-pack of the product. (EpiPens come almost exclusively in two-packs.) If 85 percent of EpiPen sales shift to the generic, as Mylan estimates, this change could lead to as much as a 35 percent reduction in EpiPen revenue for the company.

That would be a notable drop. But it is up to Mylan to decide just how much of the generic they put out into the market and there is no enforcement mechanism if the company decides to shortchange consumers on this one, save dragging Bresch back up to Capitol Hill for another grilling.

As MarketWatch points out, despite all the back-slapping and self-congratulation from Congress over the tough questioning of Bresch, fundamental underlying questions about the EpiPen situation remain unaddressed. For example, one of the reasons for the price hike of both EpiPens and other drugs remains high-deductible health insurance plans, which help shift costs of both treatment and medications from employers to consumers.

The problem of high-deductible plans could theoretically be addressed with changes to the Affordable Care Act, including the long-hoped-for public option insurance plan. But we know how Republicans – and some moderate Democrats – feel about that.

In other words, while lawmakers may be on the same side as far as anger about drug-price hikes and consumer bank fraud are concerned, right now it appears to be all talk. And that seems to be about all we can expect for the foreseeable future.