Be afraid, be very afraid: Trump is trying to cow journalists out of doing their work 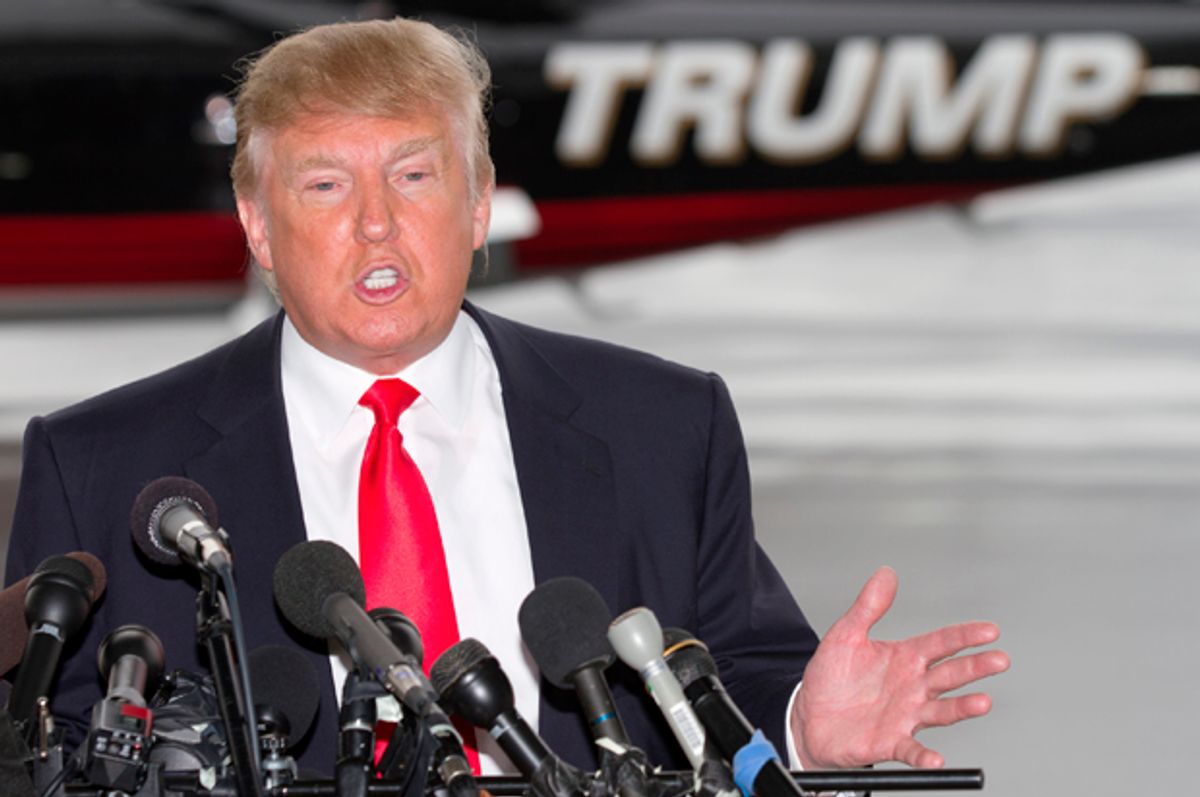 Donald Trump speaks to the media in Portsmouth, New Hampshire on April 27, 2011, after having addressed Barack Obama's release of his original birth certificate earlier that morning. (Getty/Matthew Cavanaugh)
--

When I saw that Donald Trump has charged unnamed “media” with “want[ing] debate moderators to ‘go after’ him,” my mind reeled back in time.

High-ranking among the shall-we-dance rituals performed every four years by journalists and the presidential campaigns is the degrading game of setting expectations. In 2000, when George W. Bush ran for president against Al Gore, his campaign put out the line that Gore was such an accomplished debater it would be all Bush could do to hold his own. When Bush succeeded in speaking, at times, in whole sentences, he was deemed to have done “better than expected,” which counted as a win in the debased horse race terms to which we have become accustomed.

In one of those debates, Gore was widely considered to have committed a gaffe when he walked up to Bush and asked him, ineptly, to take a position on a Patients’ Bill of Rights (“Dingell-Norwood”) then before Congress. The following Sunday, on ABC’s "This Week," George Stephanopoulos gamely tried to clarify what Gore had so awkwardly been talking about, an issue that actually could have a direct impact on voters’ lives. But those masters of insider mirth, Cokie Roberts and Sam Donaldson, made hay over how funny “Dingell-Norwood” sounded. The major impression they left: Gore is a klutz. That fit their narrative: The helpless wonky Al Gore is roped in by the Beltway. Not a guy you could sit down and start a war with.

A refreshing number of reporters have, in recent days, woken up to Trump’s serial lies, his changes of subject, his refusal to answer straight questions. They’ve shown they understand that they have to keep hammering, even at his enablers, to get any shot at a straight answer. On Sunday’s "This Week," Martha Raddatz unrelentingly kept after Mike Pence as he dissembled — hell, lied — about Trump’s birther obsession.

RADDATZ: We counted since April of 2011, and that’s the year that Barack Obama gave his long form birth certificate from Hawaii. We counted 67 times where Donald Trump tweeted or retweeted messages questioning his birthplace. He has kept this going. He has been a leader in this birther movement.

PENCE: Well, and I know there’s news reports that trace this birther movement all the way back to Hillary Clinton’s campaign back in 2008.

RADDATZ: You believe that Hillary Clinton started the birther movement.

PENCE: Look, I’ll let the facts speak for themselves.

RADDATZ: Well, no, I want to talk about the facts. What’s the proof of that?

The L word even showed up in a Times headline: “Donald Trump Clung to ‘Birther’ Lie for Years, and Still Isn’t Apologetic.” The article introduced thusly, by Michael Barbaro, was technically a “news analysis,” not a “straight news” piece. But still, progress is progress. The Washington Post’s Eric Wemple picked up the cue and ran with it:

Journalism is now examining how it should treat Donald Trump. Shouldn’t we signal to readers high up in stories that he’s a liar? That he’s a racist? The answer from The New York Times today appears to be yes. “Unwinding a Lie: Donald Trump and ‘Birtherism,’” reads the headline of a story written by reporter Michael Barbaro. If The New York Times had ever before published such a strong headline in its news section, this lifelong reader surely missed it.

“I didn’t write the headline, but I like it,” says Joe Kahn, the Timesman who is now moving from three titles — assistant editor for international, international editor and co-leader of the NYT Global group — to a single, more exalted one — managing editor. “That piece shows that where there is a clear falsehood, that covering it in an entirely traditional way in which the headline appears to indicate a wide range of possibilities and quote a wide range of sources and step back with the premise that you’re going to let the reader decide for himself or herself … didn’t feel quite right.”

Interviewing New Jersey Gov. Chris Christie on the same subject, CNN’s Jake Tapper once again stepped up as recounted in a story on the network’s website:

Though Trump had been asked whether he now believes Obama was born in the United States as recently as 2016 and hadn’t affirmed that position, Christie refuted [they meant rebutted — TG] Tapper’s questioning saying: “It’s just not true that he kept it up for five years.”

Christie: “No, Jake. It wasn’t like he was talking about it on a regular basis … And when the issue was raised, he made very clear the other day what his position is.”

If you believe Chris Christie, I have a George Washington Bridge you might want to stop traffic on.

As for Trump, his game is crystal clear. It’s the game of the thug. He’s going way beyond Bush’s 2000 conventional exercise in expectation-lowering. What you’ll see and hear isn’t about his performance; it’s about the moderators’: He aims to pre-insulate himself from serious questioning. He’s whining already: They hit me first! They’re in the tank! Bring back Matt Lauer! If a moderator corrects a falsehood, points out that he hasn’t answered a question, asks him to do so — all of which they are obliged to do if they care about truth — he’ll accuse them of doing Hillary Clinton’s work for her. If they toss him anything but a cream puff, he’ll say he told us so, those disgusting reporters have rigged the game against him.

Trump is showing his hand. He’s trying to cow journalists out of doing their work. The moderators will decide whether he runs away with the game.