The lie of white "economic insecurity": Race, class and the rise of Donald Trump 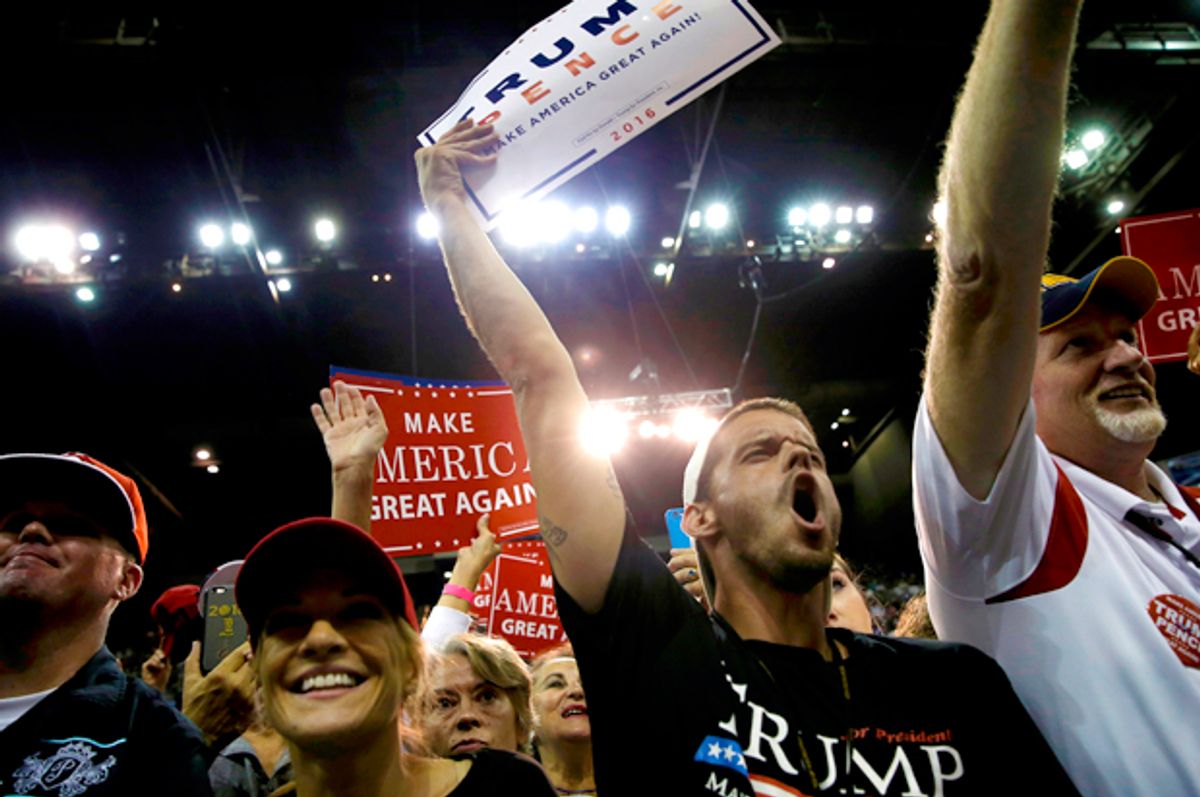 Questions of race and class have cast a heavy shadow over a presidential campaign in which “economic insecurity” has been repeatedly identified (quite incorrectly) by the mainstream news media as the driving force behind the rise of Donald Trump. In response, there has been a flurry of recent articles and essays exploring how matters of race and class are influencing the decision by “white working class” voters to support Donald Trump’s fascist, racist and nativist campaign for the White House.

Writing at The Guardian, sociologist Arlie Hochschild offers a devastating critique of how race and class intersect for white working-class American voters. In “How the Great Paradox of American Politics Holds the Secret to Trump’s Success,” Hochschild explores how white voters in the South and elsewhere rationalize their support for a Republican Party and a “small government” ethos that has devastated their lives and communities. She tells this story by focusing on one person, Lee Sherman, and his journey from pipefitter at a petrochemical plant to environmental activist and whistleblower to eventual Tea Party activist. Hochschild writes:

Yet over the course of his lifetime, Sherman had moved from the left to the right. When he lived as a young man in Washington State, he said proudly, “I ran the campaign of the first woman to run for Congress in the state.” But when he moved from Seattle to Dallas for work in the 1950s, he shifted from conservative Democrat to Republican, and after 2009, to the Tea Party. So while his central life experience had been betrayal at the hands of industry, he now felt – as his politics reflected – most betrayed by the federal government. He believed that PPG and many other local petrochemical companies at the time had done wrong, and that cleaning the mess up was right. He thought industry would not “do the right thing” by itself. But still he rejected the federal government. Indeed, Sherman embraced candidates who wanted to remove nearly all the guardrails on industry and cut the EPA. The Occupational Safety and Health Administration had vastly improved life for workmen such as Sherman – and he appreciated those reforms – but he felt the job was largely done.

Lee Sherman’s story is all too common. Because of political socialization by the right-wing media, the Christian evangelical movement, and closed personal and social networks, many white conservative voters are unable to practice the systems level thinking necessary to connect their day-to-day struggles with the policies put in place by the Republican Party.

While this way of seeing and understanding the social and political world (what Walt Whitman influentially described as “the pictures inside of people’s heads”) may be at odds with the type of critical thinking and evidence-based reasoning that liberals and progressives take for granted, it still exerts a powerful hold over many millions of conservatives. This alternate reality is, not surprisingly, anchored in place by the right-wing disinformation machine and Fox News.

Hochschild’s essay is further evidence of what I suggested in an earlier piece here at Salon: Republicans and the broader right-wing movement profit from a Machiavellian relationship where the more economic pain and suffering they inflict on red-state America, the more popular and powerful they become with those voters. This is political sadism as a campaign strategy.

Politico’s “What’s Going on With America’s White People?” features commentary by leading scholars and journalists such as Anne Case, Angus Denton, Nancy Isenberg, Carol Anderson and J.D. Vance, whose collective work examines the relationships between race, class and white America. The piece highlights how death anxieties greatly influence the political calculations and decision-making of white conservatives in red-state America. These people use their own broken communities -- places that are awash in prescription drug addictions, have high rates of out-of-wedlock births and divorce, and see deaths of despair (suicide by guns and alcohol; chronic untreated illnesses) reign -- to draw incorrect conclusions about America as a whole. These anxieties have combined with increasing levels of authoritarianism, racial resentment and old-fashioned racism among white conservatives and right-leaning independents to fuel extreme political polarization and make the emergence of a demagogue such as Donald Trump a near inevitability.

If the fever swamps that birthed Donald Trump are to be drained, there needs to be a renewed focus on the dynamics of race and class for white (conservative) voters during this 2016 presidential election. But these analyses should also be accompanied by several qualifiers.

First, liberals and progressives are often easily seduced by a narrative, popularized by Thomas Frank and others, in which white working-class and poor Americans are depicted as having been hoodwinked into voting for the Republican Party. In this argument, white poor and working-class red-state voters chose “culture war” issues over economic policies. However, as compellingly demonstrated by political scientist Larry Bartels (and complemented by fellow political scientist Andrew Gelman), poor and other lower-income voters tend to vote for the Democratic Party while middle- and upper-income voters tend to vote for the Republican Party. Poor and lower-income (white) voters participate in formal politics less frequently than middle- and upper-income voters. Moreover, “culture war” issues did not drive a mass defection of white working-class voters from the Democratic Party to the GOP.  In total, it is white economic and political elites and not the white poor and working classes who are largely responsible for the political and social dysfunction that plagues American politics today.

Second, since its very founding America has been struggling with two powerful impulses. On one hand, there is a truly progressive and left-wing type of pluralism that seeks to work across lines of race and class in order to create an inclusive democracy where upward mobility and the fruits of full citizenship are equally attainable for all people. This type of pluralism is embodied by Bernie Sanders — and to a lesser degree Hillary Clinton and the broader Democratic Party. Juxtaposed against this is a right-wing and reactionary type of pluralism that is exclusive and not inclusive, stokes the fires of racial and ethnic division, and offers a vision of America where white people stand on the necks of non-whites in order to elevate themselves. This is embodied by Donald Trump and a Republican Party that functions as the United States’ largest de facto white identity organization.

Most importantly, the white “working-class” and poor voters featured in the recent pieces by Politico and The Guardian possess agency. It has long been fashionable for liberals and progressives to suggest that the white poor and working classes are confused by “false consciousness” as demonstrated by their allegiance to America’s racial hierarchy and an economic system that often disadvantages people like them. In reality, the white poor and working class are keenly aware of the psychological and material advantages that come with whiteness and white privilege.

Whiteness is a type of property in the United States. For centuries, white people, across lines of class and gender, have coveted and fiercely protected it. The white working class and poor are not victims in this system; they have benefited greatly from it at the expense of non-whites. Ultimately, as Americans try to puzzle through their current political morass, a renewed emphasis on race and class is invaluable because it serves as a reminder of how simple binaries (one must choose between discussing either “race” or “class”) and crude essentialism (“a focus on class inequality will do more good than confronting racism!”) often disguises and confuses more than it reveals.