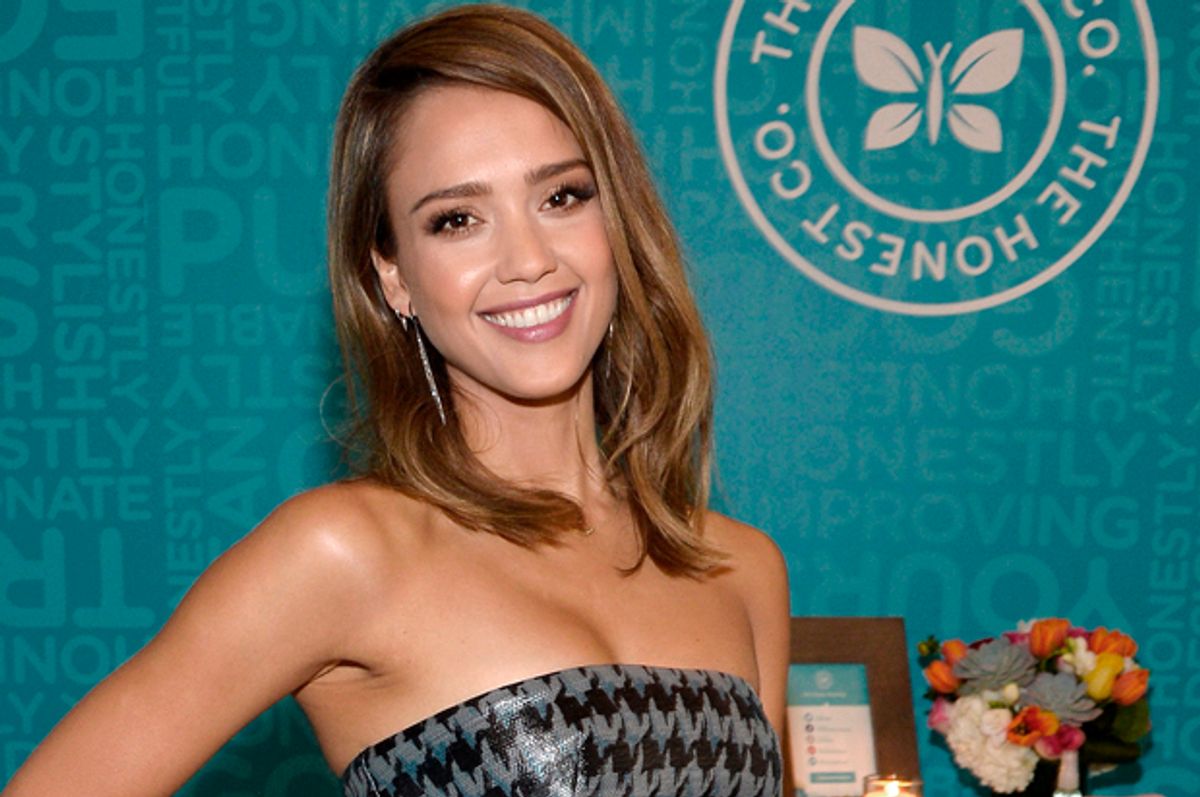 Jessica Alba earned her fame and fortune on TV and in blockbuster films over the past decade, but her business credentials catapulted to superstar level. Earlier this month, Unilever began talks to buy The Honest Company, Alba's five-year-old purveyor of plant-based diapers, organic dishwashing detergent and other “green” household products.

The British-Dutch multinational offered more than $1 billion for her California company in a bid to expand into the growing market for household products targeting eco- and chemical-conscious consumers, according to The Wall Street Journal. The deal isn’t likely to go through: Unilever announced this week it was buying Honest’s Vermont-based rival Seventh Generation for as much as $700 million, but the fact a multinational conglomerate would consider buying Honest is being cheered as a victory for women entrepreneurs. After all, Alba and co. may have turned down a 10-figure offer for their baby.

“I think it’s great,” Lakshmi Balachandra, assistant professor at Babson College in Wellesley, Massachusetts, told Salon. “It’s great to see a woman of her status have that sort of power in that position.”

Balachandra knows the importance of having high-profile business-focused stars in the public eye: Think Gwyneth Paltrow, with her rapidly expanding lifestyle and wellness empire Goop, and Jessica Simpson’s billion-dollar fashion empire. Balachandra has not only spent time in the world of venture capital but more recently has pivoted to studying the challenges women face in kicking off their ventures. And what she’s found is that the visibility of women is supremely important to changing the entrepreneurial culture in the U.S., which still leans heavily in favor of men. Female celebrities have an easier time getting investments than other women trying to start a business, but they still face strong sexist headwinds.

“We found in our research that the number of women investment professionals has decreased in the past 15 years,” she said. “This is disturbing, because we found that when women are on a venture team, the team is more likely to invest in women-led businesses.”

Bonnie Crater can relate to that.

Starting out 30 years ago at Oracle, where she ascended to head a couple of the company's product divisions, Crater worked at Netscape and as an executive at other tech firms before founding her own software firm, Full Circle Insights, in 2010. Her San Mateo, California-based company sells services that measure the cost-effectiveness of company marketing campaigns.

But Crater found it tough to raise seed capital. When her startup entered the Series A fundraising stage, seeking to obtain its first round of significant venture capital, Crater bumped into the glass ceiling. Typically an entrepreneur seeking venture capital meets with numerous investors. But after meeting with about 30 investors, she realized she was getting nowhere and she recognized the problem wasn’t her business plan, she said.

“I went to Princeton University,” she told Salon. “I had been a Silicon Valley executive at companies people heard of. I eventually realized that my problem was, ‘Oh, I’m a girl.’ I never thought this would be an issue.”

Crater believes the core of her capital problem stemmed from the fact that investors prefer to give money to members of their own “tribe.” And in the world of business, the tribe is predominantly comprised of white men. So Crater found a workaround by seeking out the few venture capital firms headed by women or with female partners, overcoming her initial reluctance to attending women-focused events.

“I went to one called ‘Women in Venture,’” she said. “It was there I said to myself, ‘Oh, my God, I’m seeing a rare species: women venture capitalists.’ There were three of them sitting in the front row of this event.”

The Ewing Marion Kauffman Foundation has found that women were half as likely as men to start their own businesses. They’re also one-third as likely to seek outside funding and less inclined to have or seek funding from a network of close friends.

Kavita Shukla had a similar experience: The 31-year-old inventor of FreshPaper, a product that inhibits bacterial and fungal growth and slows the perishability of fresh fruits and vegetables, said she gave up trying to find seed money for her own business, Fenugreen LLC.

“I kept being told I needed more experience, that I would need to raise a lot more money and that I needed someone with a lot more experience,” Shukla told Salon. “I spent almost 10 years doubting myself and my ability to do anything with my own idea. I really believed that my best hope was to find someone who was smarter and who could actually raise money.”

Eventually Shukla gave up her pursuit of venture capital and began selling her patented natural antifungal and antibacterial paper at a farmers’ market yards from her alma mater, Harvard University. While she hadn’t received much encouragement from potential investors, she received plenty from customers. Today Shukla sells her FreshPaper at Whole Foods, Walmart and other outlets (her business even subsidizes the product’s use to avert spoilage in food banks in the U.S. and in developing countries).

Shukla stressed the importance of girls’ seeing female role models in the corporate world -- be they famous movie stars like Alba or from-the-ground-up entrepreneurs like Sara Blakely, the self-made billionaire founder of Spanx.

“For boys, they get to see every example, every ethnicity, every background, of men in every position they want to aspire to,” Shukla said. “I really look forward to the day when [girls] can see all kinds of characters and personalities of women in positions of power.”