Ulay vs. Marina Abramović: How the epic legal battle between art-world giants went down

Legal analysis: Abramović provided her own undoing in this dispute over rights and profits from their joint work 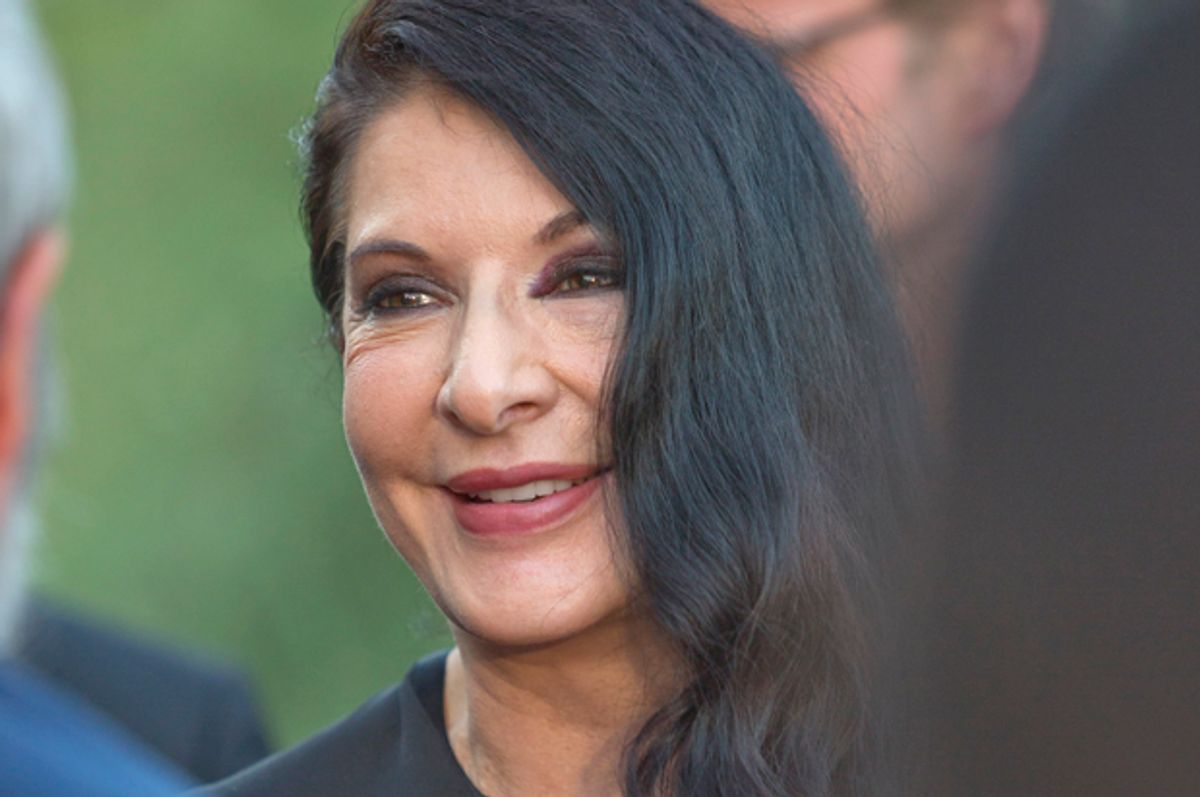 The legal battle between two of the world’s most famous artists has ended. Frank Uwe Laysiepen, better known as Ulay, has emerged victorious, after a courtroom dispute that lasted nearly a year, against his former partner in life and art, Marina Abramović.

Although both are household names in the art world, the former couple are ironically best known today among the general public for a viral YouTube video of their meeting during Abramović’s 2010 performance at New York's Museum of Modern Art, which has been viewed by more than 29 million and counting. Ulay surprised Abramović with his appearance, taking a seat opposite her as she held court across a table and simply stared, immobile, at anyone who wished to sit before her. Emotion flowed in both of their eyes, and the video, which was edited and uploaded without the permission of either artist, appeared to show long-lost lovers reuniting. Unfortunately, the truth of the matter is rather different.

Art historian and journalist Noah Charney, one of the authors of this article, was first to break the news of the lawsuit in The Guardian, which shocked the art world, as well as the news about the conclusion of the lawsuit this week. Here, along with Dutch lawyer Edgar Tijhuis, is the first in-depth analysis of this case.

The suit, brought to court in Amsterdam, was over Ulay’s allegations, now proven, that Abramović was in breach of their contract. That contract, signed in 1999, laid out how they were to handle their joint oeuvre. They ended their relationship in dramatic fashion in 1988 with a performance, each setting off from opposite ends of the Great Wall of China and saying farewell when they met in the middle.

They were not in contact from 1988 until 1999, when Abramović’s gallerist, Sean Kelly, encouraged them to draw up a contract, which was prepared in Amsterdam. Ulay sold his physical archive of their joint works to Abramović, from which Abramović could produce artist prints for sale and arrange exhibitions and re-enactments of past performances. She was contractually obliged to inform Ulay of any activity related to their joint oeuvre.

In an exclusive interview, Ulay explained that the contract was largely ignored and that instead of 20 percent Abramović was giving him a 10 percent cut — and not even of all sales, many of which were not being reported to him or incompletely so.

Despite Ulay’s and Abramović’s claims and the text of the contract, the Dutch court explicitly ruled that the contract did not make clear how “gross income” should be defined. It appeared that Abramović might have a reasonable argument, at least in this aspect of the trial. So why did the Amsterdam court nevertheless grant all of Ulay’s demands?

How Abramović landed Ulay his victory

The answer to the question of how Ulay won so decisively in this case lies in a crucial difference between Anglo-Saxon and Dutch contract law and the fateful, at least for Abramović, decision in 1999 to choose Dutch law to govern any future disputes.

In the U.S., commercial contracts often contain an entire agreement clause, stipulating that the written agreement contains all the arrangements between the parties. This clause is related to the parol evidence rule, which applies to these traditions. Based on this principle, a written contract contains all the agreements between the parties, and evidence from outside this contract is, in principle, not admitted. In short, in the U.S., the contract is God and nothing else matters.

Dutch law, however, does not have the parol evidence rule. The so-called Haviltex standard, based on jurisprudence from the supreme court, is the main rule in the Netherlands. Decisive for the interpretation of a contractual provision is what the parties could both have reasonably attributed to the provision in the given circumstances and what they could reasonably expect from each other in this respect. In interpreting a contract, the court can therefore take note, for instance, of statements made by the parties. Thus, in the Netherlands, the contract is the focal point, but other considerations can be made.

Statements made by Abramović ironically helped lead to a clear victory for Ulay. In an email from March 6, 2006, Abramović wrote to Ulay: “For all of the other photo-works in the new editions, as I bought the rights from you, the works will be sold in the following way: 50% Gallery, 30% Marina, 20% Ulay.”

And in the biography “When Marina Abramović Dies” by James Westcott, the same point was summarized: “On April 29, 1999, Abramović finally bought the entire archive. . . . Abramović gained complete control over the reproduction, exhibition, and sale of the work, though when she did sell it, Ulay was guaranteed 20 percent of the net proceeds.”

In other words, in three separate statements, she made clear a correct understanding of the contract, as opposed to the reduced “understanding” of it that she claimed in court.

In the end, the court ruled that Abramović must pay 252,000 euros in unpaid royalties, $50,000 for Ulay’s rightful cut of profits from a commercial re-enactment for Adidas of one of their joint performances, as well as 5,000 euros in compensation for damages to his “honor or good name.” Finally, she must pay 53,000 euros as compensation for the Ulay’s legal expenses — another difference between Dutch and U.S. legal traditions for in Europe it is standard that the losing party must cover the legal expenses of the winner, while this is not always the case in the U.S.

How Ulay’s heritage was almost lost and was reclaimed

Despite the significant financial implications of Abramović’s failure to live up to her contract with Ulay, his main concern was that he felt that Abramović was trying to push him out of the historical record of their joint projects. She even refused to grant Ulay permission to include images of some of their joint works in his book, “Whispers: Ulay on Ulay.” While she did not have legal right to block their inclusion, he decided to leave them out of the book and replaced them with pink squares as a form of protest that was echoed in a January 2015 performance he gave at the Museum of Modern Art in Amsterdam, in which he wrote the page numbers of the “pinked-out” images on a gallery wall.

In the lawsuit, Ulay complained about a range of occasions when Abramović, through her lawyers, tried to block exhibitions of joint or even solo work by Ulay. According to him, these attempts are likely to have a “chilling effect” on cultural institutions and lead them to refrain from collaborations with him. Although the court ruled that Abramović was allowed to contact these institutions, it also explicitly ruled that the noncommercial use of the works in exhibitions is allowed by law, and thus does not need the permission from his former partner.

The most stunning example here was the unique 1976 theft of “The Poor Poet,” Adolf Hitler’s favorite painting, from the New National Gallery in Berlin. This performance by Ulay, described as “Aktion” (the more loaded German term of the English equivalent), was documented on camera and led to the video “There is a Criminal Touch to Art.” This solo work by Ulay was not covered by the 1999 contract and therefore Abramović had no right to exploit this work. Nevertheless, she both offered the work for sale and tried to block exhibits of the work on more than one occasion, thus violating Ulay’s copyright, according to the Amsterdam court.

As the statement on behalf of Ulay, prepared by his lawyers, states, “The Court has ordered Abramović to respect her obligations under the agreement, ensure that Ulay is properly credited as joint author of these works, and desist from future infringement of his moral and economic rights. The Court has also ordered Abramović to pay Ulay a significant sum in relation to sales of joint works and a commercial re-enactment of a joint work made by Abramović in collaboration with a sportswear brand.”

In an exclusive statement provided for this piece, Ulay described this protracted legal battle, with lawyers wrangling for two years before the courtroom drama began, as “three most unpleasant and distressful years.” He said, “I won the case on the most crucial points. The relief was like shedding my skin, physical and mental.” Ulay likened this battle over artistic recognition to his own successful victory over cancer: “My cancer ordeal was aggressively threatening my life and the massive legal battle with Abramović was threatening my existence. To my opinion, the court verdict was fair and just to the truth.”

The title of Abramović’s 2010 MOMA exhibition, “The Artist is Present” was ironically referenced in the lawsuit. As Ulay explained, ‘“The Artist is Present”’ borrows from our epic 90-day performance series, ‘Nightsea Crossing,’ which we performed between 1981 and 1987. For the MOMA performance, she just cut the table in half and invited visitors to sit opposite her instead of me, though I did show up.”

Edgar Tijhuis is head of Katschberg Consulting in Amsterdam and visiting researcher at the University of Ljubljana (Slovenia). He is a former founder and partner at Pontius Lawyers in Amsterdam and received his Phd from Leiden University on an international study of transnational crime and the illicit art trade.