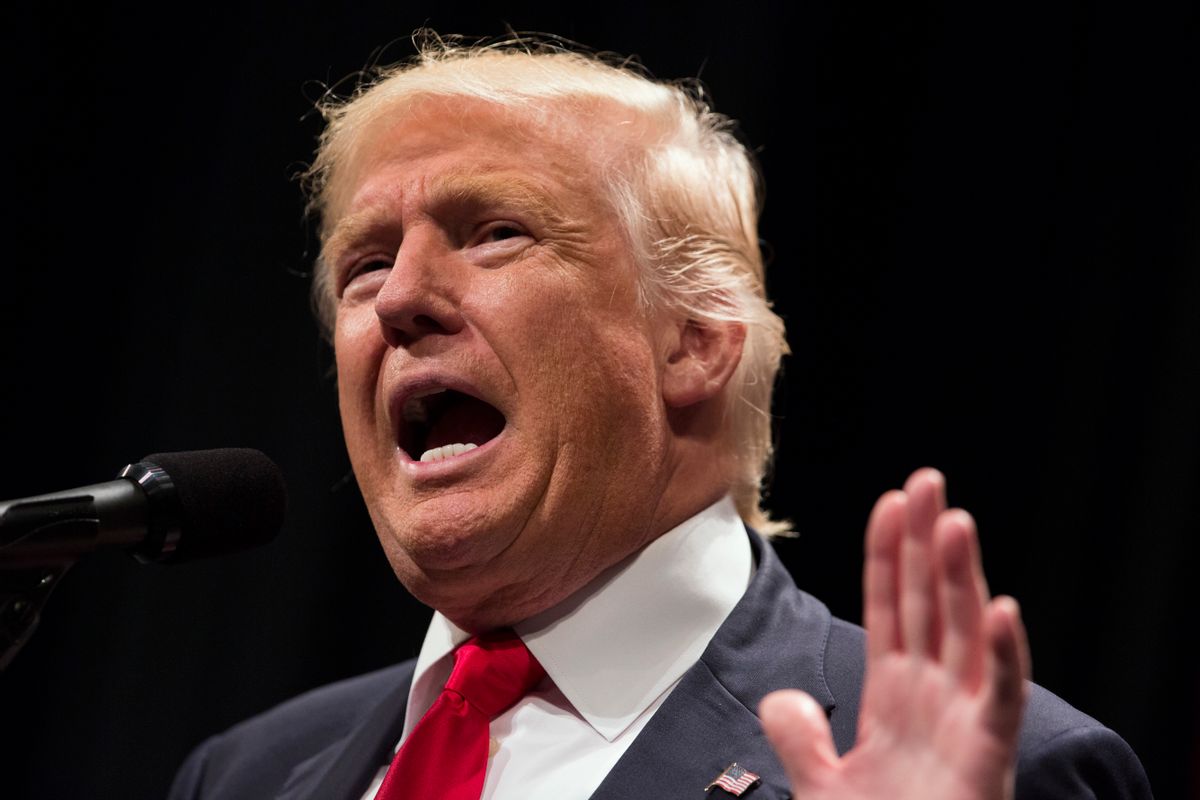 After many baffling weeks buried other news, the shady dealings of Donald Trump’s charitable nonprofit, the Trump Foundation, are finally emerging as a major political story. This is entirely due to the dogged work of Washington Post reporter David Fahrenthold, who has been assiduously documenting the foundation’s strange financial arrangements and suspicious (possibly illegal) spending practices.

Experts whom I have spoken to say the Trump Foundation’s actions, as reported by the Post, looked like pretty clear violations of laws governing charitable spending and that Trump and his charity are probably looking at fines and sanctions, with still more severe punishments possible.

Trump has already been punished by the IRS for his foundation’s suspiciously timed contribution to a political action committee supporting Florida Attorney General Pam Bondi, who had been considering opening an investigation into fraud allegations against Trump University when the Trump Foundation cut the PAC a $25,000 check. The IRS apparently impelled Trump to pay a 10 percent excise tax on the donation — $2,500 — and Trump claims that he reimbursed the foundation for the full $25,000.

But the Trump Foundation is also under scrutiny for allegations of self-dealing: using foundation funds to settle lawsuits against Trump’s business interests and to purchase items that were used for business or personal reasons, including paintings of Trump and a football helmet signed by right-wing culture hero Tim Tebow. New York Attorney General Eric Schneiderman’s office, which handles oversight of New York-based charities like the Trump Foundation, has announced its opening of an investigation into “troubling transactions that have recently come to light.”

What’s interesting about this is the extent to which Trump seems to have taken advantage of a regulatory system that relies heavily on self-policing and good-faith disclosures. Nonprofit charitable groups are regulated by the IRS and by the attorneys general of the states they operate in, but even the most robust charity-oversight regimes can’t possibly be expected to keep close tabs on all the charities for which they’re supposedly responsible.

That oversight is made still more difficult when charities like the Trump Foundation use required public disclosure forms to obscure what they’re really spending money on. The Trump campaign, in response to the Washington Post’s reporting, claimed that there couldn’t have been any wrongdoing because “all contributions are reported to the IRS, and all Foundation donations are publicly disclosed.”

But that assumes that all disclosures are being properly made. The campaign itself has already acknowledged that the foundation made an “error” in not disclosing the Bondi payment.

“Part of what goes along with the low level of enforcement is that most charities are really trying their best to do the right thing,” Linda Sugin, a Fordham University law professor told me. That makes sense, given that the success of a charity depends largely on the health of its reputation; a public charity that consistently runs afoul of state regulators or the IRS would find it more difficult to raise money. But the proliferation of misconduct allegations against the Trump Foundation, Sugin said, “possibly reflects a greater problem, which is perhaps that Donald Trump doesn’t have enough respect for the rule of law.”

Lloyd Mayer, a Notre Dame law professor,  told me, “What’s particularly unusual is the pattern of behavior, assuming all the allegations are true.” The Trump Foundation seems to have repeatedly broken basic, longstanding rules governing how charitable funds can be spent — rules that officials at the charity absolutely should have known about. “They were definitely being very sloppy,” Mayer said. “And I’d be very interested to know who their lawyers and accountants were, because they should have been telling them ‘Don’t do this.’”

Depending on what is being investigated and which agency is doing the probe, Trump and the foundation could be facing a broad range of penalties. The IRS could fine Trump, force him to pay taxes on contributions that are determined to be self-dealing and require that he reimburse the foundation. As TPM’s Tierney Sneed has reported, if the IRS finds a flagrant pattern of self-dealing, it “has the authority to terminate the private foundation by way of taxing the charity the entirety of its worth.”

Things could also become pretty hairy at the state level, depending on what the New York attorney general’s inquiry determines. “The New York attorney general . . . could require that the foundation shut down,” Mayer explained. “He could require that the board of the foundation be changed. He could also require repayments and fines.”

Whatever punishment Trump's foundation may face, there’s poetic justice in the fact that he brought all this trouble on himself. The allegations of self-dealing by Trump Foundation might have escaped the notice of light-touch regulators had Trump not run for president. But he stuck his head up and made himself one of the most visible people in the world, thus inviting reporters to scrutinize every shady facet of his public life.

That scrutiny could have a salutary impact on other nonprofits whose managers might consider fudging the rules. “I do hope this whole story being out there is an education to other charities," Sugin said, "that these things are simply never acceptable."