So the Trump campaign wasn't kidding —he didn't prepare, and the result was total devastation 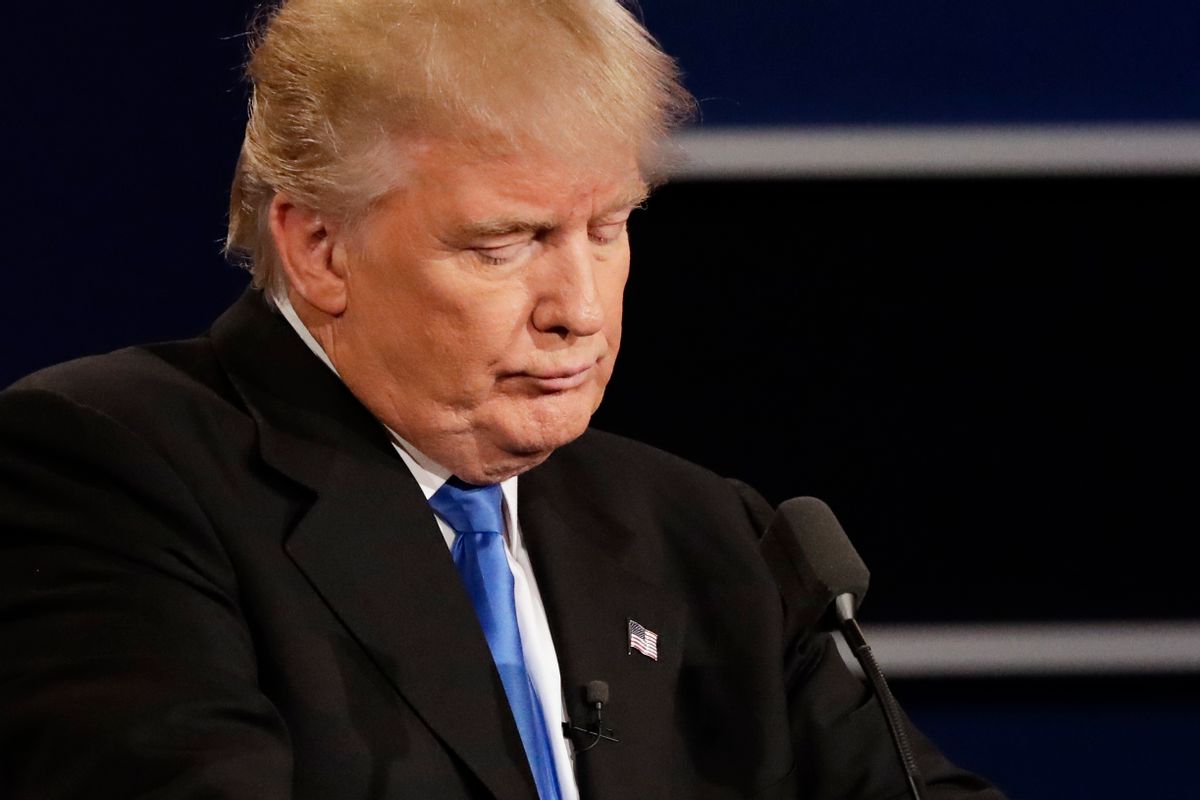 If someone had told me 10 years ago that the first general election presidential debate of 2016 would feature a CNN chyron that said "Awaiting the Historic Clinton-Trump Debate," I would have thought you were crazy. If you had told me the polls would be tied going into that debate I would have thought the world had gone crazy. But that's where we are and last night's debate showed how far we've gone down the rabbit hole.

My preview of the debate yesterday focused on the fact that Trump's "serious" debates at the end of the primaries, when there were fewer rivals, gave us some clues about how he might perform in the main event. He was aggressively incoherent and sometimes completely unintelligible, proving repeatedly that he had absolutely no idea what he was talking about.

This has been obvious from the beginning of his campaign if you watched his rallies and interviews. It's just that his personality is so remarkably bizarre that I think the lack of substance is easy to overlook. (I confess I have been somewhat surprised that so many people find his rambling "braggadociousness" appealing enough that they fail to notice that he is ignorant about everything important to the job of president.)

In recent days with the hiring of campaign manager Kellyanne Conway and CEO Steve Bannon as well as sage advice from his pal Roger Ailes, Trump has been tamed just enough to read a stump speech on a teleprompter, and he's sounded a bit more intelligible.

So there was always the possibility that he would have done a little bit of prep work, read a briefing paper or two and otherwise taken the debate seriously. It is the most important office in the world, after all. It wouldn't hurt to do a little cramming on the details before appearing in front of 100 million people to make the case for why you are the best person for the job.

Trump's campaign made it very clear that he wasn't doing any of that, but I think many political professionals assumed there was a large element of spin involved. He had to have at least done some practice debates, right? But it turns out that for the first time his campaign was telling the whole truth.

Last night Donald Trump demonstrated not only that he didn't prepare but that he has no underlying knowledge of the subjects a president is required to know. He simply tried to bluff his way through with incoherent misdirection, hostility and sarcasm, even as he made the absurd claim that his temperament is his best quality. He gave the worst debate performance of his short political career. In fact, it may have been the worst debate performance of any political career.

I wasn't sure whether or not Hillary Clinton would be able to handle him. It's disorienting to see someone spout gibberish at such an important event, particularly when it's combined with Trump's narcissism, as when he oddly asserted that Clinton only started talking about jobs in response to his candidacy, or that NATO created a terrorism policy because he goaded them into it. (That's ludicrous, of course.) But she handled him well, with humor and authority, proving that it can be done.

The reviews all seemed to indicate that Trump's best moments were his early comments on trade policy. Which is probably true but it's not saying much. He name-checked some Rust Belt states where the issue is particularly salient, which shows that he may have had some coaching. But his obsession with the subject, to the exclusion of all other economic concerns, is one-dimensional to say the least.

In fact, it doesn't seem to be economic at all and is better seen as an illustration of his crude nationalism. He shows no interest in workers as people. They are nothing more than statistics that prove America is being screwed over by foreigners. Trump seems to think that screwing workers is an American billionaire's prerogative.

In fact, Clinton deftly turned the tables on his populism by painting him out as a rich Republican swell just like all the rest, hitting him repeatedly on his business practices and failures. As Washington Post reporter Robert Costa said on MSNBC after the debate:

She yanked him toward the Republican Party. She said, "You're not going to be able to run as an outsider, you can't be a populist." She said, "You're just like George W. Bush, you're trickle-down economics like Ronald Reagan, you're supply-side, Trumped up. This is a candidate whose real appeal is that he's non ideological, that he's not running as a partisan Mitt Romney, George W. Bush Republican, and she said "I'm not going to let you."

I don't know whether anyone was convinced by that but it was one of many moments that confused Trump and pushed him off his game. When Clinton hit him for saying he hoped for the housing collapse, he reacted with a very plutocratic answer: "That’s called business, by the way." He made the same mistake later when she pointed out that there were times when he hadn't paid any taxes by saying, "That makes me smart." These were just two of many errors, lies and flashes of ignorance, temper and petulance that characterized Trump's embarrassing performance.

The simple fact is that Hillary Clinton dominated him. The debate was all her thrusting and him parrying over and over again. By the end he was visibly slumping and seemed confused. And since being a "winner" is so central to his candidacy and his personality, the loss is even more devastating.

The pundits are all wondering if that means Trump will bother to prepare for the next two debates (if he deigns to show up at all). But that may not be something he's actually capable of doing. His former co-writer Tony Schwartz, who knows him well, says that Trump has an extremely short attention span and is unable to study or learn in any concentrated way.

But just because he has no interest in or ability to learn any substance, it doesn't mean Trump won't make changes. From his comments at the end of the debate and later in the spin room, it appears that he believes Clinton wasn't "nice," so he plans to attack her personally by bringing up her husband's infidelities at their next meeting. He won't be better informed or more controlled; he's just going to take the gloves off. But she's got a much thicker skin than he does. And unless he learns how to take a hit, it's highly likely she'll be able to get the best of him next time, too. It turns out that along with a thin skin, Trump has a glass jaw.