Clinton's Trump trap: Hillary laid a series of snares, and Donald charged right into them

Hillary Clinton had two tasks for that debate: looking presidential and making Trump look like a fool. Nailed it 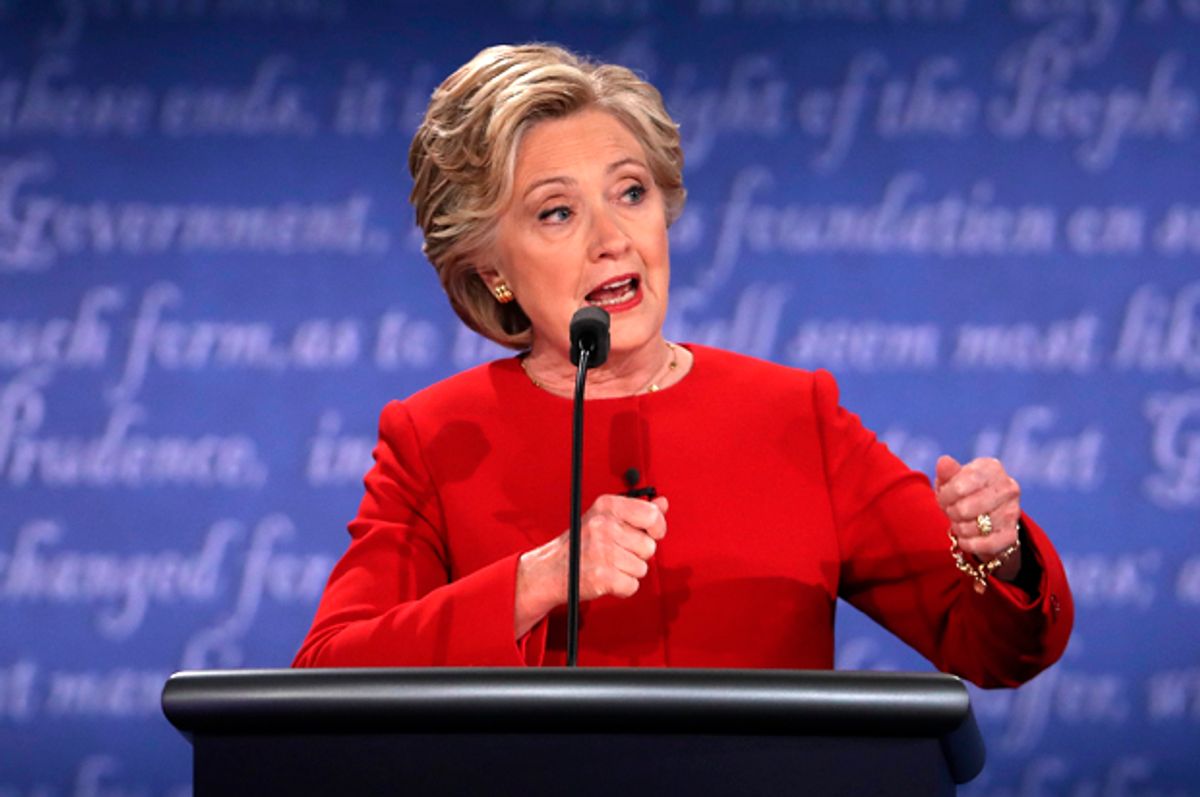 There’s an iconic scene at the end of the dark 1980s comedy classic "Heathers" in which Veronica (Winona Ryder), watches J.D. (Christian Slater), an occasionally charming but mostly terrifying psychopath, blow himself up. J.D., who is forever ranting and raving about how the world doesn’t respect him enough, had intended to destroy their high school with his bomb. Veronica was able, through great effort, to stop him. Victorious, she puts her cigarette in her mouth, waits and watches as J.D.’s bomb destroys him while also lighting her cigarette.

The high school that is our nation isn’t safe yet, but Clinton did exactly what she needed to do during this first debate: She established herself as smart, calm and presidential and then stood silently by while her opponent blew himself up.

As an experiment, I eschewed reading Twitter or watching post-debate analysis on cable news in order to watch the proceedings in a packed bar in Brooklyn. Those in the crowd wasn’t a cross-section of America, to be sure, but they were exactly the liberal base that Clinton needs to get fired up for November. And from my vantage point, she did exactly that.

She staked out openly progressive positions on a variety of issues, ranging from job creation to criminal justice reform (her comments about implicit bias and the evils of stop-and-frisk policies went over especially well with the New York crowd). She emphasized, with repeated references to her website, that she is the candidate who actually has policy proposals to get things done instead of vague, hyperbolic promises.

But it was clear that Clinton's main goal was goading Trump into revealing his true self and proving conclusively that no amount of training or pleading from aides will turn Trump from the narcissistic hothead he is into someone who can be trusted with the nuclear codes. The plan worked, and from Clinton's triumphant and eminently GIF-able wiggle in the middle of the debate, it's clear that she knew it.

Trump began the debate with a subdued tone, eschewing his usual shouting for a halfhearted imitation of what a responsible statesman looks like and maintained that composure for a whopping 10 minutes, perhaps even 15. Then Clinton rolled out her first piece of bait.

"You know, Donald was very fortunate in his life, and that’s all to his benefit," she said. "He started his business with $14 million, borrowed from his father, and he really believes that the more you help wealthy people, the better off we’ll be and that everything will work out from there."

Clinton went on to detail how she would prefer to invest in the middle class, and from then it was game on. Trump took the bait, issuing an angry defense of his father's giving him money. And with the plug pulled out, the incoherent ranting lunatic that he was barely containing inside came pouring out.

And the angrier Trump got, the more confident Clinton became (as you do when your carefully laid plans blossom into glorious fruition). She was even able to pull off a number of zingers, which are not exactly her strong suit.

Much credit goes to moderator Lester Holt, who largely steered away from "gotcha" questions that so many journalists mistake for hard questions, leaning more toward open-ended, policy-oriented questions. Conservatives will no doubt be furious, since answering such questions requires coherence and an ability to explain the details, two skills Trump hasn't mastered. But it's worth remembering that this is a presidential race not a kindergarten class. If Trump can't handle the basics of being a politician, the voters need to know that.

The most telling section of the debate was the lengthy exchange about race and criminal justice. Clinton emphasized the value of nuanced policies that balance the need for safety with protecting human rights: training police to address racism, ending the private prison system, enacting gun-safety measures to reduce violent crime, getting rid of unjust mandatory minimum sentences and doing more to help people with mental health issues so that they don't end up in ugly encounters with police.

Trump, in contrast, claimed that "African-Americans, Hispanics are living in hell" and compared living in major American cities to living in a "war-torn country." He then suggested that black voters are a bunch of dupes who have "been abused and used in order to get votes by Democrat politicians."

At that point it got even worse for Trump, because Holt asked him the question that countless people have been demanding:

Mr. Trump, for five years, you perpetuated a false claim that the nation’s first black president was not a natural-born citizen. You questioned his legitimacy. In the last couple of weeks, you acknowledged what most Americans have accepted for years: The president was born in the United States. Can you tell us what took you so long?

Rather than answer the question, Trump rolled out an incoherent right-wing conspiracy theory accusing the 2008 Clinton campaign of starting the birther movement. (It didn't, and her campaign was diligent about firing people who spread the rumor).

Clinton knew better than to dispute a conspiracy theory that's known only to people who refresh Breitbart's site on their screen all day long.

Instead, she responded by saying, "Well, just listen to what you heard."

His response? "We settled the suit with zero — with no admission of guilt. It was very easy to do."

And then again, for emphasis, he added: "Because I settled that lawsuit with no admission of guilt, but that was a lawsuit brought against many real estate firms, and it’s just one of those things."

Perhaps "no admission of guilt" should be the Trump campaign's new motto. It has a certain ring to it.