"The most abnormal event I've ever witnessed": In a wild battle between Hillary Clinton and Donald Trump, Lester Holt was the big loser

When the debate is like a fierce fight between wild animals, the moderator is bound to come away bloodied 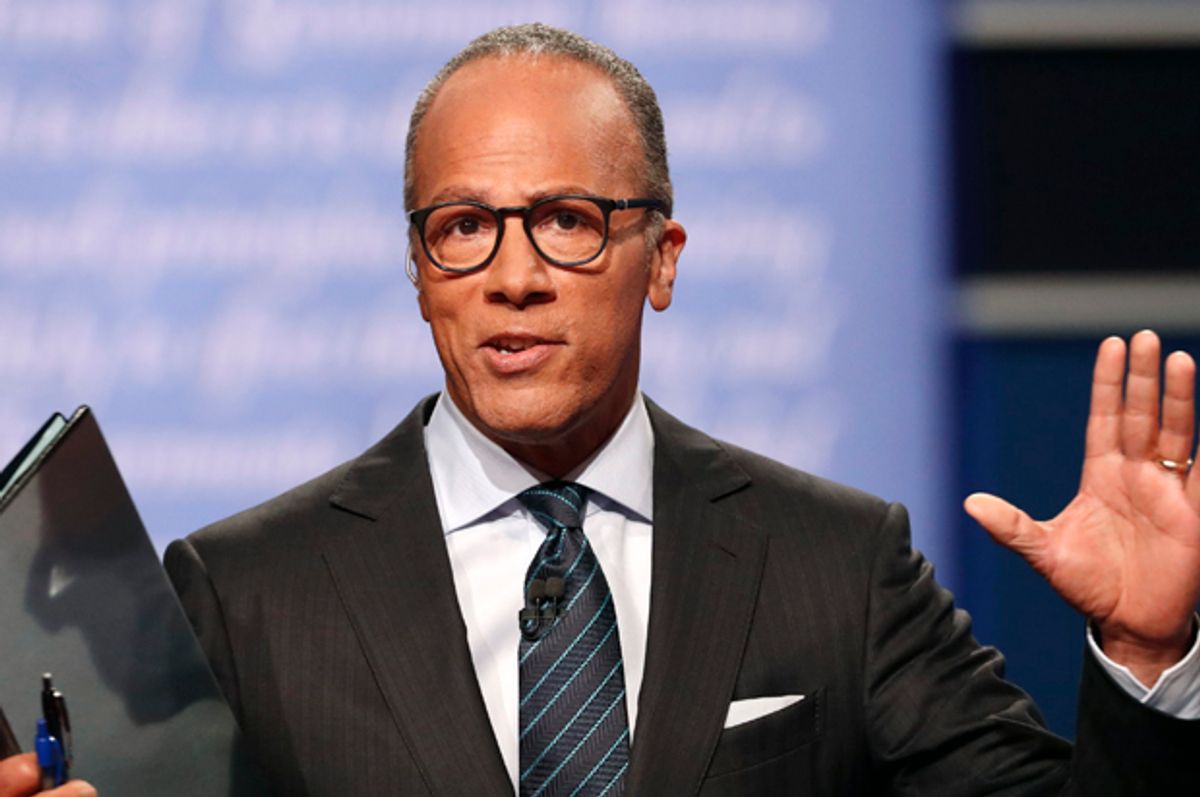 Lester Holt speaks to the audience before the start of the presidential debate in Hempstead, New York, September 26, 2016. (Reuters/Mike Segar)
--

The pregame coverage of the first presidential debate compared the face-off between Republican nominee Donald Trump and former secretary of state Hillary Clinton to a boxing match or, as my colleague Chauncey DeVega astutely observed, a professional wrestling bout. As someone who’s more of a nerd than a sports fan, these comparisons were somewhat lost on me.

Instead, what took place at Hofstra University's David S. Mack Sports and Exhibition Complex on New York's Long Island felt a lot like watching a mongoose take on a cobra. To quote a Smithsonian Channel video’s explanation of two of the natural world’s most famous adversaries, they are each other’s prey and deadliest opponents. So it went at the beginning of Monday night’s debate, as Clinton faced down Trump, sizing him up to see where and when his vulnerabilities would surface, with moderator Lester Holt of NBC largely failing to disrupt the fray when the lightning-paced writhing and weaving became tough to follow with the naked eye.

The themes, as initially presented by Holt, were supposed to be "America's Direction," "Achieving Prosperity" and "Securing America." But between Clinton’s largely successful if Herculean effort to maintain her poise and Trump’s off-kilter, decorum-defying pugilism, the first debate was a rough 90-plus minutes of a strategic offense and measured defense on one side, and a near meltdown on the other.

Near the end of the debate, when Trump assured us, "I also have a much better temperament than she does" in the midst of a babbling rant, it was almost as if he were trying to transform the brawl he sought to start into a sitcom, casting himself as the feckless Cosmo Kramer figure.

Of course, this televised match was always less about the candidates selling us on concrete policy proposals and plans than truly showing viewers who they really are. Clinton appeared to know this, cementing her dominance at about 59 minutes in by delivering one of several zingers with surgical precision. Responding to Trump’s accusations that Clinton had retreated from the campaign trail in recent days, she replied, "I think Donald just criticized me for preparing for this debate. . . . You know what else I prepared for? I prepared to be president, and I think that's a good thing."

Initially, however, it was tough to suss out exactly who was the mammal and who was the snake. This is stated without assigning any pejorative association to either of these animals; a predator is simply a predator in the natural world. Fearsome as it is, there’s much to be admired in the cobra, which tends to be reticent until provoked, and the mongoose, though cuddly looking, is a bonafide killer.

But it doesn’t take much to annoy a cobra — just a few well-placed nips here and there. And all it took for Clinton to blow any plans that Trump had to “look presidential” to the four winds was to poke at his business record and cast doubts upon his honesty. Not long after, the hood came out and the sniping began.

If winning the debate were to be determined by how the candidates looked on camera, as significant historic matchups have in past election cycles, Clinton would have won handily. But in a lot of ways this evening was a draw. Even the most obvious loser, Holt, did the best he could do in what NBC's Chuck Todd accurately described as "the most abnormal event I’ve ever witnessed." Who can win when you're put between a mongoose and a cobra?

Knowing that if he went too hard to Trump, he’d be accused favoritism, the moderator was barely able to hold the Republican nominee to debate rules, lamely attempting to interject as Trump spoke over Clinton during her allotted time, failing to corral the candidate’s off-topic rebuttals and allowing his stream-of-consciousness Sturm und Drang about the country’s downward spiral to explode the schedule.

At the same, though hamstrung by his agreement to refrain from live fact-checking, Holt did his able best to repeat the originally stated topic and question when the contenders attempted to steer the conversation off the course he had set — and he did fact-check some of Trump's most egregious misstatements. This was an effective gambit to reveal the smoke-and-mirrors aspect of some of the flimsier responses to substantive questions about the birtherism issue, military strategy and economic policy.

Then again, a person would have to be paying attention to notice this — and who's watching the moderator as the cobra and mongoose strike at each other?

Meanwhile, Clinton, having spent decades in the public eye getting feedback about how she looks at every angle and in every situation, maintained her poise. When Trump lobbed mud in her direction or attempted to outright malign her, she smiled. Even Fox News Channel’s Brit Hume admitted in his post-debate summary that she looked composed for the most part but then smug at times and, in his words, “not attractive.” (The Roger Ailes legacy lives on!)

And it’s true that in watching any presidential debates, it is crucial to witness the facial expression of the opposing candidate while the other is talking. Whenever Hillary spoke, Trump looked annoyed, flummoxed and more ruddy-faced than usual. His appearance wasn’t helped by the fact that he had an audible case of the sniffles amplified with increasing frequency as the debate wore on. At inopportune times, he sighed with fatigue or boredom; at one point, when Clinton mentioned the African-American community, he exhaled an “ugh” into the mic.

Clinton entered the Long Island arena unfairly saddled with a tougher degree of difficulty, partly owing to good old-fashioned sexism that required her to look presidential without seeming too intimidating and partly due to the ease with which the media has complied with nearly every single one of Trump’s manipulations.

According to an MSNBC graphic shared earlier on Twitter, Clinton would be required to “sell her presidency (what she would do, and how she would do it)” “be the Clinton who shines in a smaller crowd” and laughably “Get those jokes off, adding levity.”

She met at least two of the three qualifications handily. Clinton had to be sharp but not too sharp. She had to show viewers that she can be likable without rolling over to any of Trump’s efforts to bully her. She also had to display her diplomatic acumen and knowledge of government without coming off as wonky. And when she opened the debate, she looked almost robotic.

She found her ease soon enough, bobbing and weaving like a pro. As she calmly offered concrete proposals to Holt’s questions, Trump fell back on his favorite declaration that “our country’s in deep trouble,” assuring voters that “I’m going to cut taxes big league” and “I’m really calling for major jobs.”

Indeed, the aforementioned MSNBC list had declared that all Trump had to do was “stop lying, show humility, and fill in the gaps in his policy proposal.” Monday night he endorsed the failed stop-and-frisk policy and replied to Clinton’s insinuation that he doesn’t pay federal taxes by saying, “That makes me smart.” When Trump attempted to bully Clinton by speaking over her statements – some 25 times in the first 26 minutes, according to one count — or lobbing insults at her, she maintained her expression of bemusement as she continued to speak or patiently endured his interjections.

Clinton and Trump both entered the debate arena aware that Holt would be of little to no help to either of them whatsoever. Prepared for this, Clinton urged viewers many times to go to her website, where fact-checkers were dutifully tearing apart each of Trump’s half-truths and out-and-out lies with a feed linking to various articles (as well as making it simple to donate small amounts to her campaign). This was a disappointing tactic, but also took one item off of her long to-do list.

And it may matter that in the final moments, Clinton looked into the camera to make her plea to American voters to “vote as though your future depended on it,” as Trump touted his “Make America Great Again” slogan to the audience.

Conversely, that detail could have no effect whatsoever on our interpretation of who won this debate or the polls. One of the truths that NBC political analyst Nicolle Wallace pointed out in the aftermath of the debate is that the usual qualifications for winning or losing such a match do not apply here.

Trump may not have comported himself in the manner of a president in the classic sense, but if the objective was to show his supporters that he can tussle with a politician, mission accomplished. Clinton kept her cool and laid out her policies, but there’s the question as to whether any undecided voters truly heard her.

That’s the thing about live wildlife confrontations: There’s a lot of growling, fast movements, flying fur and clear evidence of wounding. But sometimes the victor isn’t obvious until long after the cameras have turned off, the dust settles and the damage has had time to take its effect. In this case, the loser was the stiff whose job was to referee the ferocious duel between a biting wit and thrashing fangs.