In the Trump Matrix: The GOP nominee is a hopeless narcissist, living in his own fantasy universe — but maybe that's what Americans want

Donald Trump stands for nothing and no one, except himself. Does America really yearn to breathe his brain farts? 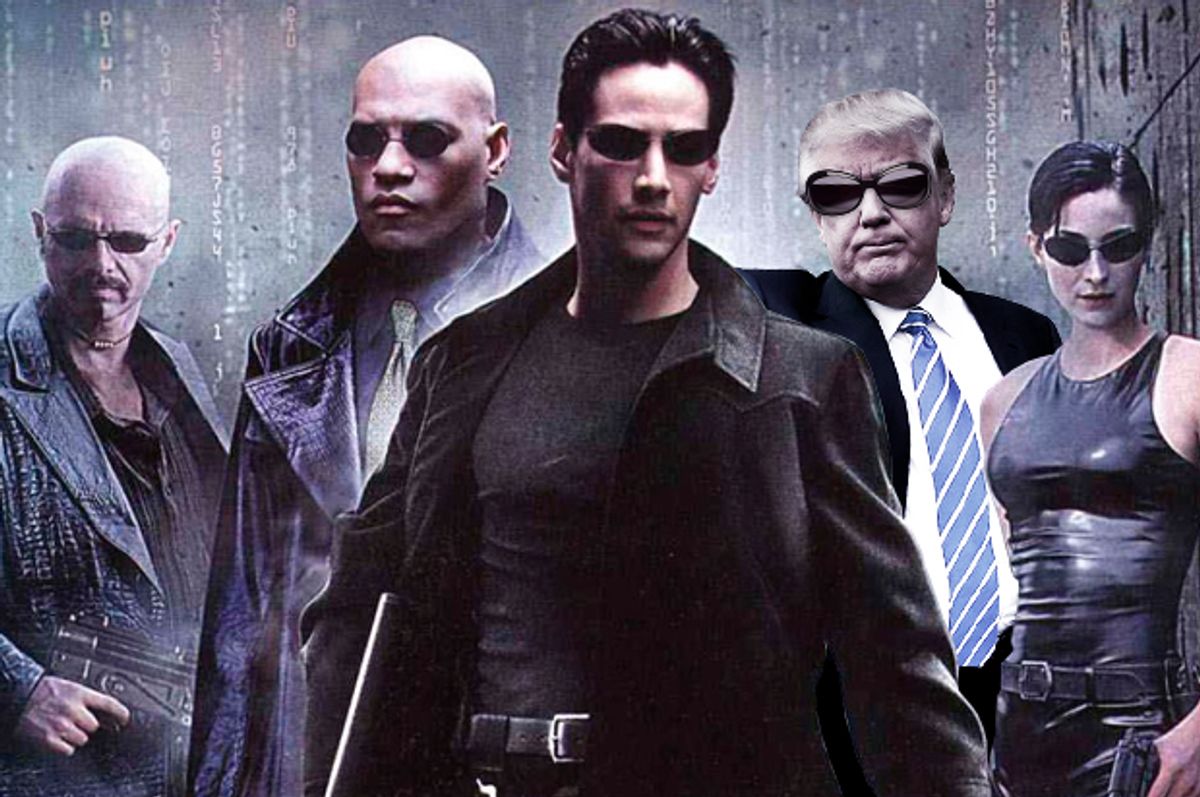 Amid the howling vacuum of Donald Trump’s mind and Donald Trump’s damaged personality, there has never been room for other people. That has been obvious all along to anyone who has remotely paid attention, so it’s foolish to claim that Trump’s bottomless narcissism was at last laid bare before the world in Monday night’s presidential debate. Narcissism and vainglory and “braggadociousness” are not incidental by-products of the Trump campaign or the Trump brand; they are its all in all. As has become terrifyingly clear, large numbers of Americans like Trump precisely because he’s a pompous blowhard saying things he doesn’t actually believe about subjects he doesn’t understand.

Even by those standards, the Trump we saw during the Hofstra University debate this week seemed like a man trapped in an airless chamber talking to himself. It was a little like the baffling later scenes in the baffling final film of the “Matrix” trilogy, when the entire population of the movie’s computer-simulated universe becomes an infinite series of copies of Agent Smith, Hugo Weaving’s affectless techno clone.

Trump has more personality than Agent Smith — indeed, he has only personality and nothing else — but he does not necessarily seem more human. Trump’s only plausible audience for his endless self-glorification is, well, himself. His only argument for being president is his own greatness, and his only argument for his greatness is that his greatness is so huge as to be self-evident.

Who else was Trump talking to on Monday night, with his avowal that paying no taxes makes him “smart” or his defense of the fact that he rooted for the real estate collapse of 2008 and profited from it mightily: “That’s called business, by the way.” Was that stuff directed at his supposed demographic of working-class and middle-class white Americans, who feel they have been left behind by economic transformation and demographic change? Were they rooting for the housing collapse, too? Do those people have the option of zeroing out their federal income taxes (as we now suspect Trump has done) or repeatedly filing for bankruptcy, without facing damaging personal consequences? Can they refuse to pay legitimate debts to vendors and contractors, without being dragged through years of draining lawsuits?

Of course even Trump’s most loyal followers — the ones who venerate him as North Koreans supposedly venerate their Dear Leader, to borrow Ann Coulter’s line — can’t do things like that. The unanswered question behind the #TrumpWon anti-pundit backlash that followed the Hofstra debate, I suppose, is whether they wish they could. Whether, in other words, Trump supporters have given up on the real world, and simply want to live vicariously through the onanistic Matrix-universe of Trump’s personality, which is simultaneously so shrunken and so bloated.

Numerous surveys of “undecided” or “independent” voters after Monday’s debate suggested that they were horrified and outraged by Trump’s performance. I don’t think he cares. Trump’s entire campaign strategy, if that’s even the right term, involves injecting his followers with a diluted serum of Trumpian false consciousness and false self-confidence. It sounds stupid and suicidal, in political terms, but it has worked pretty well so far.

Everything about the Trump candidacy except the moronic helium-ooze cocktail of his personality is just metaphorical, especially his so-called positions on so-called issues. Trump’s Great Wall will never be built, needless to say, and there is no imaginable mechanism by which Mexico could be made to pay for it. Furthermore, Trump’s followers understand that, on some reluctant level of consciousness, or at least suspect it. Don’t get me wrong: They love the wall! It remains the greatest hit of Trump’s classic-rock arena tour. But the wall is nothing more than fantasy-game wishcasting; it might be built in some horrible Trumpified version of Minecraft but not in reality.

Trump’s proposed ban on Muslims' entry into the country (now more or less abandoned) was always illegal, unconstitutional and unimaginable for various reasons. That was a metaphor, too. It’s halfway between a gag and a vicious masturbatory fantasy, as is so much of far-right discourse. Trump fans who have “9/11 Terrorist Hunting Permit” stickers on their Silverado pickups do not really have terrorist hunting permits. They do not actually want us to pry their guns from their cold, dead hands.

How many right-wingers genuinely believed that Barack Obama was born in Mombasa or that Hillary Clinton abandoned the U.S. government employees in Benghazi because she’s a girl and she hates America? And how many simply embraced an opportunity to stir up trouble, sow political confusion and slow the already sluggish operations of government to the pace of frozen molasses?

Still, that shudder you felt going through the right-wing thought bubble on Monday night and Tuesday morning was real: It reflected the widespread sense that Hillary Clinton left Trump stripped naked and looking uglier than ever on that Long Island stage. He speaks for no one and represents nothing, except himself. The only universe in which Donald Trump stands for the economic or cultural interests of working Americans is the dumbed-down Matrix unisphere he and his followers have created together, an imaginary realm of intense ignorance and meanness whose only atmosphere is Trump’s rhetorical brain farts.

Whether the American electorate yearns to breathe those fumes into the indefinite future and would prefer to live in an orange-hued monstrosity's reflected self-delusion rather than confronting the unsatisfying complications of the real world remains to be seen.