"Where's the beef?": After Clinton and Trump went for style over substance, here are the burning issues we need to tackle at the next debate

The first presidential debate was a study in contrasting styles, but these crucial issues were never even discussed 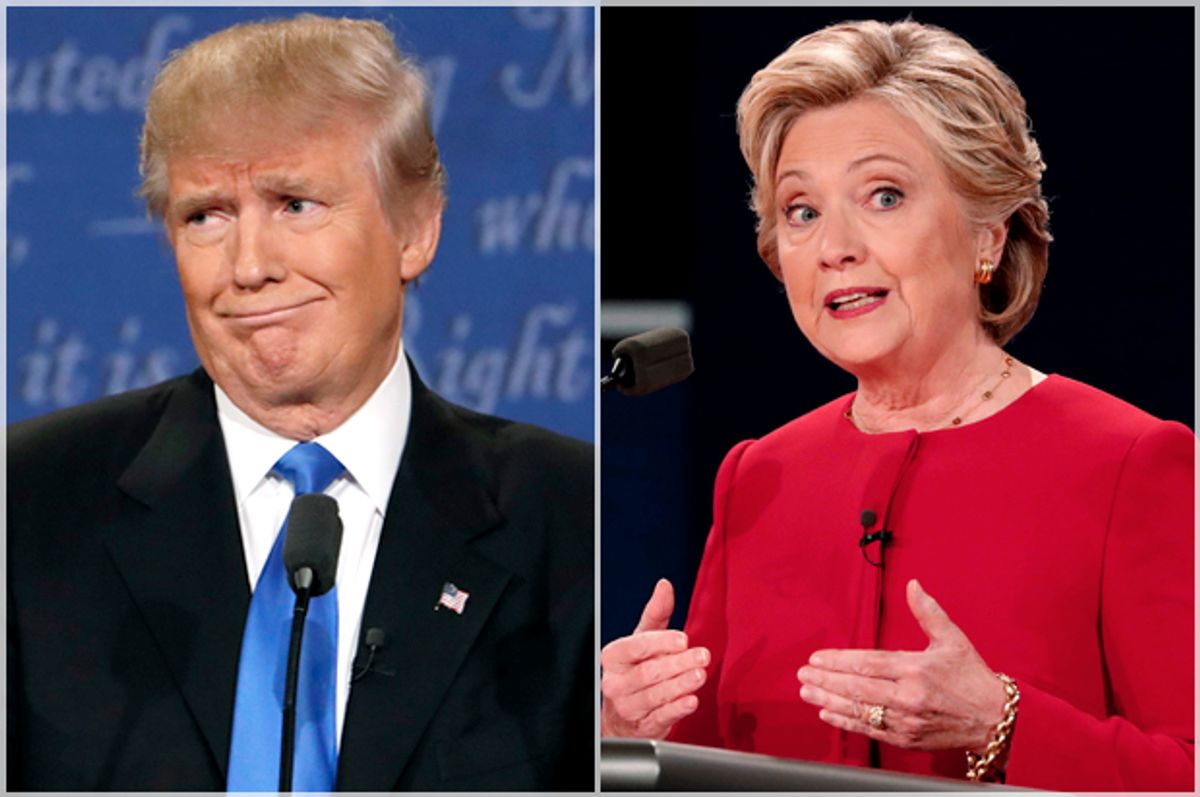 Is it too soon to start looking forward to the second presidential debate? Well, Donald Trump has yet to stop relitigating the first one, having spent most of Tuesday blaming his terrible Monday night performance by turns on moderator Lester Holt, former Miss Universe Alicia Machado and a debate commission that he suggested gave him a faulty microphone on purpose.

But while much of the post-debate commentary focused on how well Republican presidential nominee Trump and his rival Hillary Clinton performed under the bright lights of the debate stage, less attention was paid to the policies each one has been advocating. In Trump’s case this is partly because he changes his policy preferences more often than most people change their underwear.

Don’t like a Trump proposal? Wait 30 seconds, he’ll have another one.

As for Clinton, her reputation is that of a policy wonk who loves to dig deep into issues. Indeed, that's supposed to be one of the selling points of her candidacy. Campaign surrogates have often cited the thousands of words about policy on her website versus the few hundred on Trump’s.

One area where she struggles is in connecting the importance of her policy solutions to their ability to materially affect disaffected voters who are unenthusiastic about voting for her. So some pointed questions on policy might help her in this area, if she can answer them without some of the stiltedness that she showed at times on Monday night.

Of course, it is difficult to fit complex policy solutions into the two minutes allotted for answering questions. And any candidate will want to avoid going deep into the policy weeds and losing the audience. Still, there were some glaring omissions: The list of matters that got no airtime or at most a passing mention on Monday includes some of the most pressing issues we face.

So with the next debate scheduled for a week from this Sunday, here are a couple of topics that moderators Anderson Cooper of CNN and Martha Raddatz of ABC must ask the candidates about:

President Barack Obama has said climate change is the most pressing foreign policy issue of our time. The competition of nations for resources that have been degraded and diminished by a warming planet is already leading to violent conflicts around the world. Indeed, there is some evidence that a drought driven by climate change has planted the seeds of the civil war in Syria that will be a foreign-policy priority for the next president.

The United States is a party to worldwide climate treaties that require it to do its part to reduce emissions. So whether a new administration would honor those treaties is an important matter for the rest of the world. Our military, which Trump keeps claiming he wants to rebuild, is already factoring climate change into its long-range plans. The GOP may still want to pretend the phenomenon is not happening, but that won’t stop it.

Yet the only mention of climate change on Monday was when Clinton referenced a  2012 Trump tweet in which the real estate mogul accused the Chinese of inventing this “hoax” in order to destroy America’s economy. It deserves more attention than that — much more.

Obamacare still faces GOP-led resistance and continued efforts to kill it. This is causing problems for members of the public. Trump’s plan is the same as it has been for over a year: Repeal Obamacare and “replace it with something terrific.” Clinton has signed onto the idea of a public option that would expand coverage and provide some competition for insurers.

Seven years after the passage of Obamacare, the two parties still have a huge and unbridgeable philosophical gap on the right of Americans to have access to health insurance. A presidential debate is a good opportunity for the candidates to make clear to the voting public how their choice this fall will affect whether they have that access in the future.

The Republican Party has been running a sustained effort to disenfranchise voters, particularly people of color, who generally vote Democratic. These efforts, which were ramped up after the conservative-dominated Supreme Court in 2013 gutted the Voting Rights Act, have been so egregious that federal courts have been furiously slapping them down. Yet some of the laws enacted by states for voter identification and other restrictions will keep thousands of people from voting this year.

Trump, with his newfound concern for the African-American community, should be pressed hard on whether he agrees with the rest of the members of his party that it should keep as many black people from voting as possible. Clinton, meanwhile, could be asked about her announced plans for restoring voting rights and how much of a priority she intends to make restoring the franchise.

One of the few topics on we have a specific plan from both candidates is family leave. Given Trump’s history of sexism and misogyny along with his pride in having barely lifted a finger to help raise any of his children, this seems like a surefire topic that will get both candidates talking — and sparring. Serious issues can still make for great TV.

The moderators have until Oct. 9 to get their questions ready. Here’s hoping they will address at least a few of the issues ignored in the first debate.