Salon talks to Hoffmann, Amy Landecker and Jay Duplass about merkins, waxing and the politics of on-camera nudity 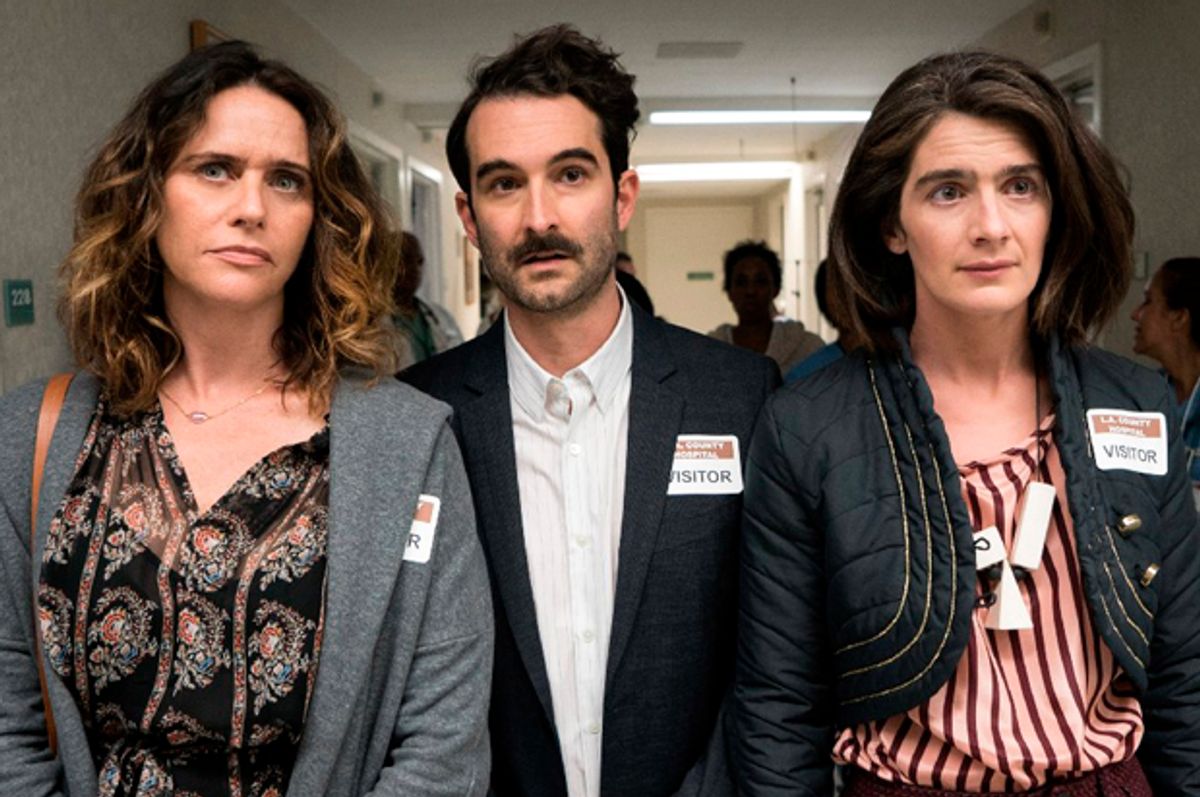 Gaby Hoffmann’s bush is mesmerizing. Flowing. Fierce. Free. The epitome of Freud’s Medusa, it is the feminist embodiment of femaleness. With recurring seasonal appearances on both "Girls" and "Transparent," Gaby Hoffmann’s bush deserves its own SAG card — or, at the very least, its own IMDb page. (There’s a Twitter account for gaby hoffmann’s bush, but, alas, it has yet to send out a tweet.)

The latest entry on the IMDb page would include an appearance early in the third season of "Transparent," which dropped on Amazon Prime last Friday, in a lush and dreamy scene of Hoffmann’s character, Ali Pfefferman, au naturel in the forest.

My obsession with Gaby Hoffmann’s bush caused me to abandon journalistic decorum during a press junket for the third season of "Transparent." While I was interviewing Hoffmann and her TV siblings Amy Landecker (Sarah Pfefferman) and Jay Duplass (Josh Pfefferman), Hoffmann had no sooner sat down when I blurted out, “I want to talk about bush pride. I am obsessed with your bush! Is that your real bush on camera? I want to talk about your pro-bush politics.”

Hoffmann said when her characters show pubic hair on screen, it's "always my bush," except in the first season of "Transparent."

“I was very pregnant and my belly was in the way of my bush,” said Hoffmann. “I was mad. I didn’t want a bush stand-in! And I was like, Just shoot it with me! And there was a stand-in, and of course, she didn’t have a bush. So she had a wig . . .”

To which Landecker and I simultaneously chimed in, “A merkin!”

“Yes, a merkin," Hoffmann said. "It was the only time it wasn’t my bush because my baby was in the way.”

“Nudity, to me, doesn’t feel strange or hard,” explained Hoffmann, who grew up “very naked and comfortable,” having spent the first 11 years of her life among the bohemian artists of the Chelsea Hotel in New York City. Her mother was Viva, one of Andy Warhol's "superstars." Exposure to an environment where self-expression was art gave Hoffmann her liberal ethos and a certain ease and fearlessness about nudity.

Hoffmann understands the value of this type of exposure when it comes to feminist body politics. It’s important, she noted in our interview, “that we can see more representation of real female bodies.” But she quickly clarified, “Not that having a waxed pussy isn’t real. It’s totally real. To each her own.”

In a TIFF master class in September, "Transparent" creator Jill Soloway gave a lecture on the female gaze. The male gaze, she said, which is “pretty much everything you’ve ever seen seen” on TV and film, presents women as objects to be gazed at and desired or possessed. The female gaze is not the inverse of that. It is far more complex and involves numerous parts. As Soloway said in her talk, the female gaze “says, I don’t want to be the OBJECT any longer, I would like to be the SUBJECT, and with that SUBJECTIVITY I can name you as the OBJECT.”

The female gaze is therefore a “justice-demanding way of art making . . . of changing the way the world feels for women when they move their BODIES through the world.” With the female gaze, women are seeing, feeling humans, not objects. They are characters “feeling themselves as the subject.”

This is where Gaby Hoffmann’s bush comes in as an instrument of the female gaze: It disrupts the male gaze. “It’s about bodies again, bodies of women. Ladies. Girls. Gender non-conforming people,” Soloway said.

Hoffmann has shone in productions created by female show runners like Soloway and Dunham, both of whom have revolutionized not only how we see women’s bodies on screen, but also what types of bodies we see on screen, too. Hoffmann’s powerful embodiment of womanhood forces the audience to reconcile the fullness and hairiness: the naturalness of her body.

This resonates with Soloway’s theory of the female gaze “using the camera to take on the very nuanced, occasionally impossible task of showing us how it feels to be the object of the Gaze.” The gaze is turned on the gazers. At the same time, there’s a difference between what we see on the screen, and how we live our daily lives and how we prefer our own bodies to be in the world.

This is the point in our conversation when Landecker interjected, “I want to defend waxed pussies!” Everyone laughed, including Duplass, who sat the whole time between Landecker and Hoffmann sometimes with his head down in contemplation and perhaps even modesty, but seeming to enjoy every minute.

Landecker's defense of shaved bits was grounded in pleasure and pragmatism. “Gay or straight, the access and the pleasure that can come from not having to forage through — and I wish men would do it, too — is easier and lovely."

"It has nothing to do with oppression,” she added.

Hoffmann concurred. “I have heard about it from women I trust about pleasure and access, and like I said if . . . it didn’t look like a 12-year-old’s pimply face, I would give it a go.”

The conversation turned serious (to the noticeable delight of their publicists, who sat aghast in the corner of the room as we discussed pubic hair) when Hoffmann reflected on the larger topic of nudity in the entertainment industry and in American culture. “I think what’s most important is that we all just lay the fuck off each other,” she said. “If you want to have a hairy pussy, great. If you want to have a waxed pussy, great.”

Duplass opened up then about his own "Transparent" nudity and first on-camera sex scene.

"In the pilot, I was mostly naked a lot of the time," Duplass said. "I was so nervous about that — I was so fucking freaked out about it — that when it came time for me to orgasm, and that camera was right here," he said, making a close-up gesture. "I was like, Oh, this is what I should be scared of!" he said. "There's no acting in orgasm. I was just sweating bullets!"

For Duplass, the unnerving intimacy of the scene had less to do with nudity than with emotional exposure. Despite the cultural taboo of male nudity on screen, Duplass' story conveys how gender norms and expectations play out differently for men and women. Vulnerability is culturally coded as female, feminine; it is deemed unnatural for a man to be vulnerable. Instead, on screen and in life, men are supposed to be strong, impassive and even aggressive.

Violence is accepted and acceptable in American culture to the extent that no actor is ever questioned about “what it feels” like to act out aggression on screen. Instead, women are interrogated about any and every flash of skin. It is no wonder that many of Hollywood’s most celebrated actresses, like Meryl Streep, have refused to do nudity. In an industry dominated and directed by the male gaze, they do not want their careers reduced to bits of tits and ass.

But women like Hoffmann, whose incredible acting skills earned her two Emmy nominations in 2015, one for "Girls" and the other for "Transparent," are changing the rules. Through working with feminist show runners, actors like Hoffmann are proving how bodies — and even pubic hair — can matter.