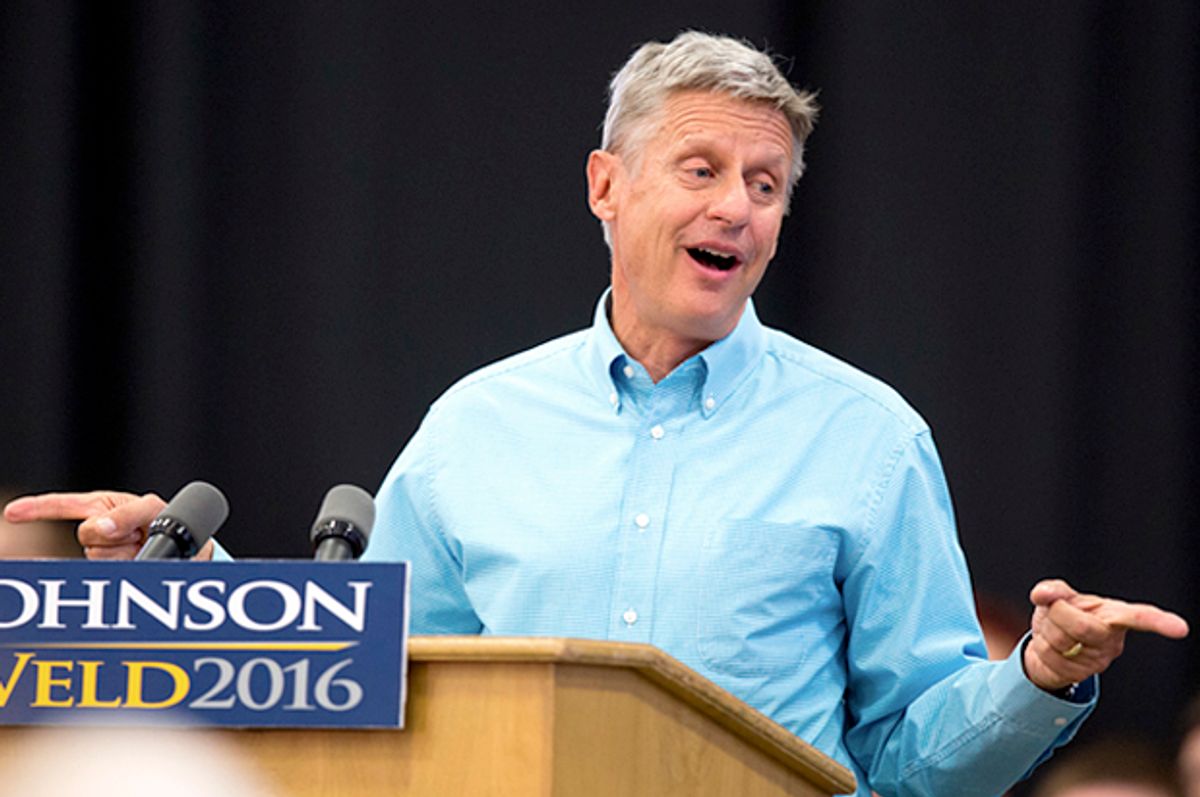 As we hit the final stretch of the most incredible presidential campaign in modern memory, it appears that third-party candidates may end up being more consequential than they've been since Green Party candidate Ralph Nader in 2000. It's very close, and there is a real possibility they could decide the election. With Libertarian nominee Gary Johnson, the onetime Republican governor of New Mexico, at nearly 10 percent and pulling more people who say Clinton is their second choice, Donald Trump may be the beneficiary in the all-important battleground states.

After watching Johnson and his running mate Bill Weld, the former Republican governor of Massachusetts, in Wednesday night's town-hall meeting with Chris Matthews, I think maybe they should let Johnson in the debates so more of these voters could see exactly what they're voting for. The risk is that while Johnson would reveal himself as a bizarre and ignorant man, he might just make Republican presidential nominee Trump look smart and competent by comparison.

When Johnson was interviewed on "Morning Joe" in early September he made one of the more memorable gaffes in campaign history when his answer to "What would you do about Aleppo?" was "What is Aleppo?" He didn't recognize it as the name of the second-largest city in Syria, which has been in the headlines for months as a battleground where the government is fighting rebel forces. On Wednesday, Johnson said he took responsibility for his Aleppo gaffe, but further explained that he doesn't believe that just because "a politician can dot the I's and cross the T's on some geographic location or the name of some foreign dictator, now we should believe them when it comes to these interventions."

I'm not sure who believes that just because someone has educated herself about geography and foreign leadership that her ideas must automatically be followed. It's just that most of us used to think that presidents should have some basic knowledge of facts before they propose policies. The campaign of 2016 has revealed that such qualifications are no longer considered a requirement for the job — at least not by the half of the electorate who claim to be voting for Trump or Johnson.

And then Johnson did it again. Matthews asked him to name his favorite foreign leader, and Johnson again drew a blank, finally admitting, "I guess I'm having an Aleppo moment." Unfortunately, the exchange went on and on, with Matthews pushing and Johnson floundering, until Weld finally stepped in to cite Chancellor Angela Merkel as his favorite and the whole thing mercifully came to an end.

When asked by one of the fresh-faced young people in the crowd what he said to people who claim that a vote for Johnson is a wasted vote, the candidate told him, "A wasted vote is a vote for someone you don't believe in." Matthews came back with a quote from President Barack Obama from earlier in the day:

Johnson's bizarre nonresponse was to say that Clinton and Trump are doing nothing about Medicare and Medicaid and that "we're headed to bankruptcy with the size and scope of government."

When asked about his views on climate change, Johnson rambled on about the coal industry going bankrupt and said he believes the free market is going to fix the problem. How would he make college more accessible to students, a matter central to the Democratic primary campaign and now integral to Hillary Clinton's platform? Johnson said that the reason why college costs so much is that government-guaranteed student loans have "skewed supply and demand." In other words, if fewer people go to college, tuition will go down.

A young woman asked if a Johnson administration would cut Planned Parenthood funds, and Johnson said he plans to submit a balanced budget in the first 100 days that would require 20 percent trims across the board. Asked about money in politics, he said he believes there should be no restrictions on campaign contributions. A young man asked him if he would consider rethinking his support for the Trans-Pacific Partnership trade deal and Johnson said absolutely not. He made it very clear that he intends to eliminate every trade barrier he can find.

The theme that Johnson returned to over and over is that he believes in balanced budgets, cutting entitlements and reducing debt over everything else.

He portrayed Hillary Clinton as a psycho who is going to start a nuclear war. When asked about it again later in the broadcast, Johnson said that would happen because Clinton refuses to be "seen as weak" and "she will shoot." It was yet another absurd statement in a long line of them. There's only one candidate who's threatening to start a nuclear war and it isn't Clinton.

Many young people become attracted to libertarianism for a time after they read Ayn Rand's novels and are exposed to the seductive lure of selfishness as a philosophy. Some stick with it for a while, or become standard Republicans as time goes on. But judging from the questions at Wednesday's town hall event, this audience was not a bunch of Rand acolytes eager to talk about the moochers at Planned Parenthood or the parasites who want free college. With the exception of one or two questioners, most sounded like earnest progressives who may have voted for Sen. Bernie Sanders during the primary season.

Johnson's libertarianism is very, very different from  Sanders' altruistic democratic socialism. Sanders believes that government has an affirmative duty to help people. Johnson believes that government is an impediment to the natural working of the free market. It's overwhelmingly obvious that Clinton comes much closer to the Sanders philosophy than does Johnson.

Given how close the election is in certain key states, a few protest votes could put Trump in the White House. As Sanders is telling anyone who will listen, "Before you cast a protest vote — because either Clinton or Trump will become president — think hard about it. This is not a governor's race. It's not a state legislative race. This is the presidency of the United States." It's also the future of the planet.