Philippine president compares himself to Hitler: "I'd be happy to slaughter" drug addicts

He did get the number of those killed wrong, though 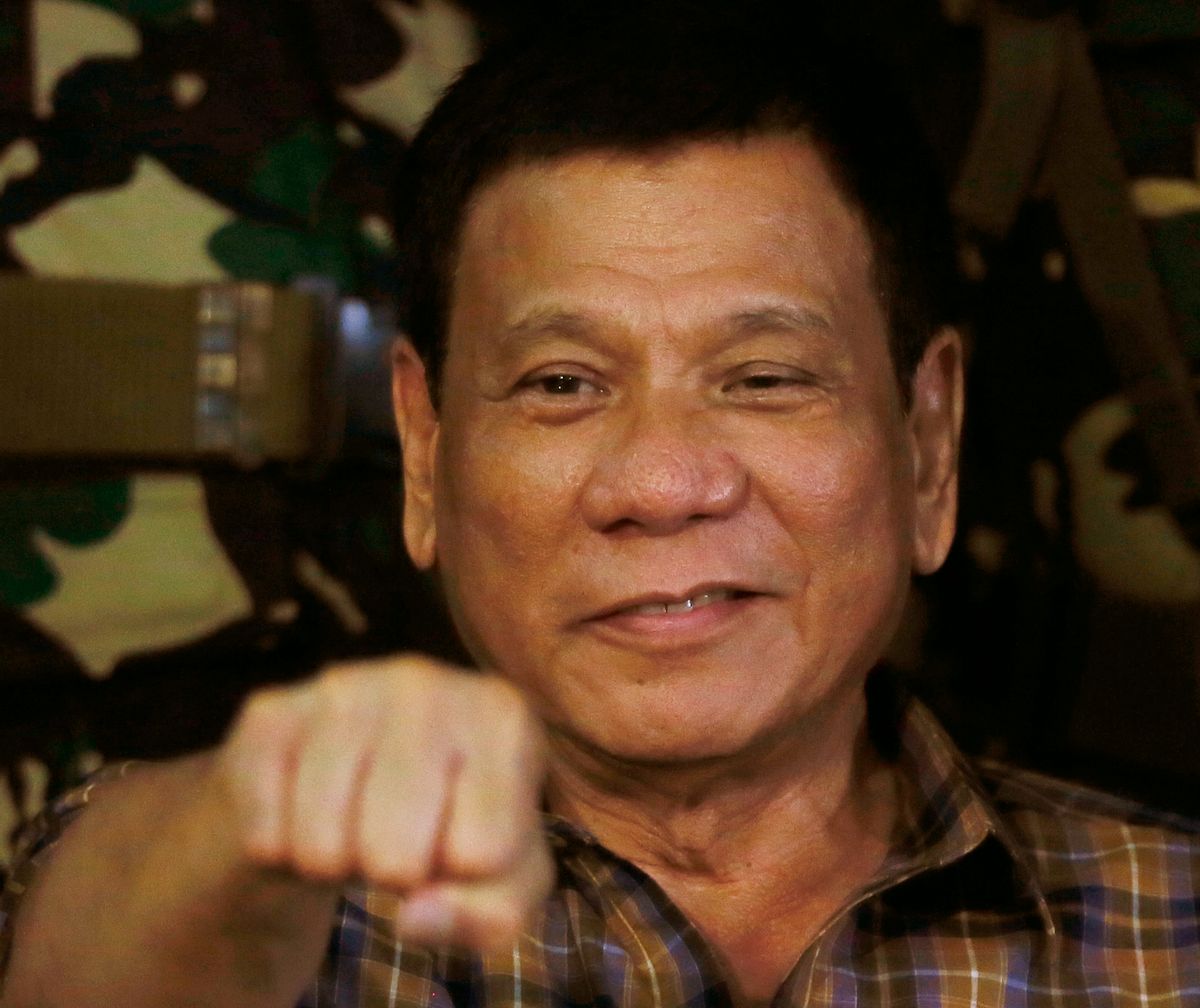 FILE - In this Aug. 25, 2016, file photo, Philippine President Rodrigo Duterte gestures with a fist bump during his visit to the Philippine Army's Camp Mateo Capinpin at Tanay township, Rizal province east of Manila, Philippines. Duterte raised his bloody anti-crime war rhetoric to a new level Friday, Sept. 30, 2016, comparing it to how Hitler massacred millions of Jews and saying how he would be "happy to slaughter" 3 million addicts. Duterte issued his latest threat against drug dealers and users early Friday on returning to his home in southern Davao city after visiting Vietnam, where he discussed his anti-drug campaign with Vietnamese leaders and compared notes on battling the problem. (AP Photo/Bullit Marquez, File) (AP)
--

MANILA, Philippines — Philippine President Rodrigo Duterte raised the rhetoric over his bloody anti-crime war to a new level Friday, comparing it to Hitler and the Holocaust and saying he would be "happy to slaughter" 3 million addicts.

Duterte issued his latest threat against drug dealers and users early Friday on returning to his hometown in southern Davao city after visiting Vietnam, where he discussed his anti-drug campaign with Vietnamese leaders and ways for their governments to fight transnational crimes, including illegal drugs.

Duterte has said his public death threats against drug suspects are designed to scare them into stop selling drugs and to discourage would-be users. But his latest remarks took that crime-busting approach to a different level.

"Hitler massacred 3 million Jews ... there's 3 million drug addicts. There are. I'd be happy to slaughter them," Duterte said, referring to a Philippine government estimate of the number of drug addicts in the country. Historians say that 6 million Jews were killed by the Nazis under Hitler before and during World War II.

During the presidential election campaign earlier this year and during the three months he had held office, the tough-talking Duterte has threatened to drown drug suspects to fatten the fish in Manila Bay. He also threatened to execute drug traffickers by hanging — because he didn't want to waste electricity on them — until their heads were severed from their bodies.

While Hitler victims were innocent people, Duterte said his targets are "all criminals" and that getting rid of them would "finish the (drug) problem of my country and save the next generation from perdition."

The comparisons with Hitler were criticized by Phil Robertson, the Asia deputy director for Human Rights Watch, who said it was baffling why anyone would want to compare themselves to "one of the largest mass murderers in human history."

Robertson said that in today's context, Hitler would be accused of crimes against humanity, charges that often end up at the International Court of Justice in the Hague.

"Is that what Duterte wants? Does he want to be sent to the international criminal court, because he's working his way there," Robertson said.

Duterte's campaign promise to end corruption and crimes, especially illegal drugs, within six months of taking office on June 30 carried him to an overwhelming victory in the presidential election.

And since he won the election in May, more than 3,000 suspected drug dealers and users have been killed and nearly 700,000 others have surrendered in his crackdown, but he has asked for a six-month extension to finish the job.

His supporters and many Filipinos exasperated with widespread crime have welcomed his tough approach, but a growing number of critics, including U.N. officials, the European Union and the United States, have voiced concerns over the widespread killings and human rights violations.

He reacted Friday by calling critics from the European Union a "group of idiots in the purest form."

Duterte lashed out at the U.S., his country's longtime treaty ally, and the E.U. for finding fault with his methods, saying European countries were hypocrites for not doing enough to help the large numbers of refugees fleeing from the violence in the Middle East.