Our lady of the pantsuit: In praise — yes, praise! — of Hillary Clinton's style

No, I'm not literally calling Hillary Clinton a saint — but she is an icon of fearless womanhood to me 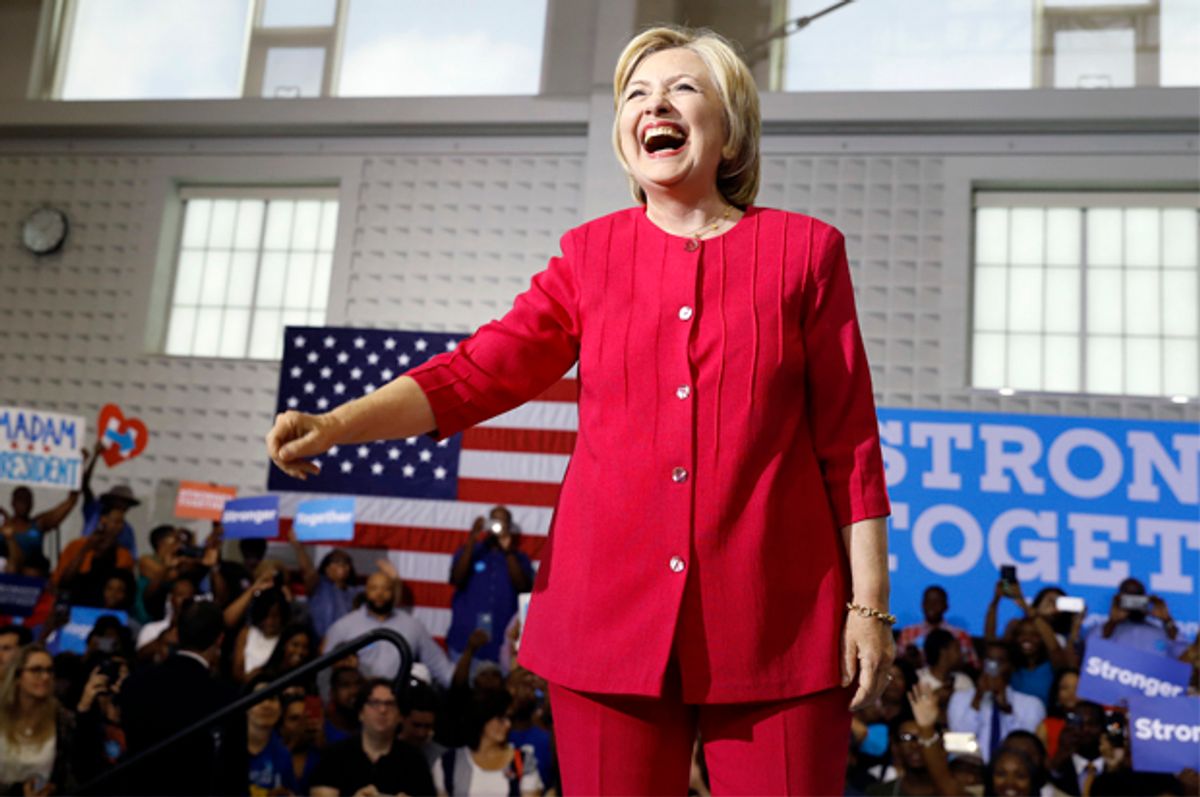 It’s time we talk about pants. Hillary’s, specifically. I’m thinking of the red pair she rocked a few nights ago at the first 2016 presidential debate. Fire Engine. Candy Apple. Crimson. Whatever you call the shade, Hillary’s pantsuit was hot—even as she remained cool in the face of the most blustery and unpredictable opposing candidate in history.

I wasn’t even finished crushing on the white suit she wore to accept her nomination at the Democratic National Convention back in July, given that all but the leanest women tend to avoid the color. Like horizontal stripes or mid-length capris. Even my mother-in-law, when discussing the convention, was surprised Hillary had chosen white.

“I know,” I smiled, thinking of all the white I’ve never worn. “And I love her for that.”

And just when I thought I could not have stronger feelings for a pantsuit, Hillary comes blazing onto the stage in red, once again obliterating the idea of looking as small as possible that dominates women’s sartorial choices, especially those in the public eye. It has been the job of women to slenderize, minimize and fade away. We veer toward narrow cuts and safe colors: navy and black and gray. Never red. Red screams I’m here. Red says I’m not backing down. Red makes the body into a beacon, and we’ve been made to fear all that largeness and reflected light. But for her first debate against Trump, with so much at stake and millions watching, Hillary chose to flare.

But even beyond the color, there’s the fact of the pants themselves. We’re getting used to Hillary’s suits, but let’s not forget that most women still wear dresses to elevate events and manage the spotlight. Accepting the nomination for president and debating her opponent is about as elevated as an event can get, and Hillary chose to wear pants. She’s been wearing pantsuits all along. Mostly they’re elegant, but sometimes they make her look stern, or their silhouettes aren't as flattering as expected. But even as an undergraduate at Wellesley, Hillary fought for many things, including admitting more black students and adding more black studies to the curriculum, but she also battled to abolish the dress code requiring skirts in the dining hall. So you see, Hillary’s commitment to pants is solid and longstanding.

My attention to Hillary’s attire began with the display of nutcrackers for sale at Dulles airport during her 2008 presidential run. There she was, rendered in plastic, wearing a navy blue suit, campaign button on her lapel, smile painted on her face.

"Is America Ready for this Nutcracker?" The box asked.

My gut sank. A gag gift, yes, but with an all-too-real statement about what we think of women who try to claim power. Nutcrackers. Ballbusters. Battle-axes.

Eight years is not so long ago. The vitriol against Hillary began long before and will continue, no doubt — but even as Trump restated his view that she “doesn’t have the look” of a president, something has begun to shift. The 2016 version of the Hillary nutcracker depicts her a little fuller in the face, a bit wider in the thighs, wearing black pants and a pink blazer. Her smile is more pointed than pleasing. Her posture is commanding. Her arms have migrated from crossed over her chest to hands planted firmly on hips, giving the overall impression of someone prepared to kick ass.

The packaging has changed and I suppose I have too, because I no longer mind the nutcracker and have, in fact, become delighted by the sight of Hillary in her power pose and steel-lined thighs.

No more nuts in the White House.

It’s possible that I’m reading too much into nutcrackers and pantsuits. But I’m an American woman in 2016, confused by the tangle of symbols and messages, caught up in the mash of feminine ideals and realities, and I need something to cling to.

Which leads me to prayer cards. Also called holy cards, the pocket-sized devotionals feature illustrations of the saints. Catholicism, for all the negative press and gender inequality, produces as many holy cards of women as men — more if you include all the iterations of The Blessed Mother. No matter what else, a Catholic girl grows up with images of women venerated for their actions and strengths. The only catch, of course, is that the qualities they’re praised for tend to be virginity, martyrdom and self-mortification — virtues that have for too long been synonymous with what it means to be a good woman. Certainly, the female saints were bold. Certainly, they made others uncomfortable. But on holy cards, they are depicted as soft and pliable, ethereal creatures outfitted in robes of pale green, pink and blue who lift their eyes beseechingly to Heaven or lower them humbly to the ground. So that when it comes to models for those qualities I most want to develop, I find myself in need of an updated list.

I want a patron of loud talk, of speaking her mind, of taking up space. Give me a woman who climbs flagpoles, an icon with full thighs and an easy and resonant laugh. Where’s the patron of good sex, of not apologizing, of erasing from her face — at least part of the time — the sweet pink smile? How about a patron of taking charge, of wild success, of not backing down? Give me a high-flying woman who has no clue what to do with leftover chicken cacciatore. I don’t hope to become a composite of such characteristics, but neither do I any longer want to fear them.

I’ve begun to assemble my own icons; lighting candles to the teenage detective Nancy Drew and her gender-bending pal, George Fayne, making altars to Harlem Renaissance trumpeter Valaida Snow, cloaking the Victorian tightrope walker Maria Spelterini in a mantle of blue, saying novenas to Susan B. Anthony. Now I’m adding Hillary to the list. Our Lady of the Glorious Pantsuit. Light spills from her in jagged sunbursts, and a gilded nimbus encircles her scarlet suit as she stands on a slip of moon. Queen of persistence. Model of putting yourself out there, of standing your ground, of daring to flame in the spotlight.

Listen, I’m not suggesting that Hillary is a saint. Nor do I consider her Our Lady in any Marian sense. I’m only borrowing the language of veneration, and if in doing so I’m guilty of throwing too much adoration her way, so be it — because apart from physical desirability and self-sacrifice, how often do we openly adore women?

But back to the pantsuit and Hillary on stage. She looks into the camera without blinking and is listened to for what she says and not how much she pleases the eye as she says it. Vital at 68. With stamina to spare. She’s not selling her sweetness or her beauty — though in this, there is profound beauty.

Why I love Hillary is that I don't need to like Hillary.

We women, even the most educated and progressive, still spend much energy trying to please. We almost can’t help it. We’re groomed for it from the get-go — learning to lower our voices, to put others first, to make ourselves tiny, to try for the prettiest face — until it feels as natural as breath. There’s nothing wrong with cultivating attraction, or sacrifice, or kindness. The real problem is how uncomfortable we become when someone breaks out of the mold and comes at the world with an unbroken gaze. No matter how much we embrace the concept of powerful women, in real life we aren’t always comfortable with them. They rattle subtle but ingrained expectations and threaten to undo something so embedded in the fabric of our culture we can hardly name it. We tend not to like them, even if we aren’t exactly sure why. All of which has me thinking about pants and our ongoing discomfort with a woman who wears them. Because, make no mistake about it, Hillary wears pants. Unapologetically. Literally. Symbolically. And in every other glorious sense of the word.

Sonja Livingston is the author of four books of literary nonfiction. Her latest, "The Virgin of Prince Street: Expeditions into Devotion," was published by University of Nebraska Press. Her award-winning essays are widely published and anthologized. She teaches in the MFA program at Virginia Commonwealth University in Richmond.