Don't assume black voters are "with her": Contempt for Trump doesn't mean we love Hillary 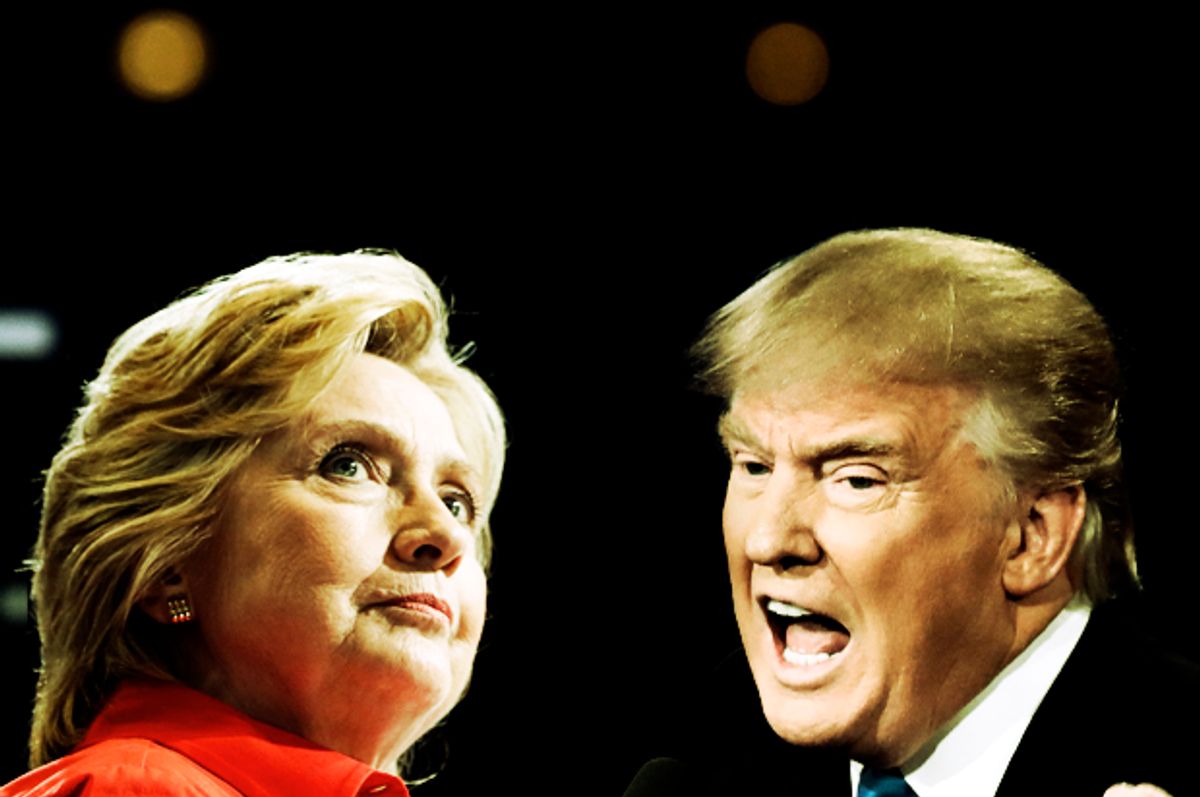 Donald Trump slander is being slung by every black writer I know from every inch of the Internet, as it should be. How can a person with so many obvious flaws become the nominee of a major political party? No, really -- I’m still confused. Everything from his overtly racist rallies and the way he trashes women to his gross generalizations about immigrants -- and his hair -- offends us. But collectively, I'm worried that we African-Americans are sending the wrong message to the general public. Contempt for Trump doesn’t equal love for Hillary Clinton and her husband, or even basic support.

I was in one of those comfy Acela chairs on my way back to Baltimore from a recent New York trip. A middle-aged white dude in non-stylish frames took the chair directly across from me. We had barely pulled out of Penn Station before he asked me, “Did you watch the debate? What did you think of the debate?”

“It was everything I thought it would be," I said. "She prepared, he didn’t. She came off as sharp, he didn’t.”

He sat up straight in his chair, closed his ears and opened his mouth.

“I’m so over this election,” he said with exhausted eyebrows, “It’s a joke.” He then took off his jacket and went on an “I hate Hillary” rant all the way from Manhattan to his stop in Philly -- nonstop, everything from her days as a toddler up to our current conversation. It was the emails, it was Benghazi, it was Monica Lewinsky, it was her pantsuits, and on and on and on. I tuned him out, drifted off in my head -- and came back for this: “America can’t take another four years of the Clintons! Sorry I trashed your candidate, man, but she’s so bad. Anyway, have a safe trip!”

I chucked a peace sign in his direction, put my earphones on, turned Coltrane up and gazed out the window. It really didn’t dawn on me until I passed Delaware: I never said anything to the dude about being a Clinton fan. I couldn’t be a Clinton fan if I wanted to -- that racist crime bill from 1994 locked my whole family up. Not just my blood relatives, but all of the brothers and sisters in my community­­ -- the mentors, the role models, the coaches. The people responsible for grandfathering us into successful lives are gone, and we are bitter. So bitter -- an impenetrable bitterness that’s harder than cold steel and so toxic, so acidic that if liquefied it’ll easily melt flesh and dissolve elephant bones. It’s 2016, and Hillary and Bill are still calling us super-predators.

Michelle Alexander penned a power article in the Nation a few months back on why the Clintons shouldn’t even think about the black vote. She wrote:

Clinton championed the idea of a federal “three strikes” law in his 1994 State of the Union address and, months later, signed a $30 billion crime bill that created dozens of new federal capital crimes, mandated life sentences for some three-time offenders and authorized more than $16 billion for state prison grants and the expansion of police forces. The legislation was hailed by mainstream-media outlets as a victory for the Democrats, who “were able to wrest the crime issue from the Republicans and make it their own.”

When Clinton left office in 2001, the United States had the highest rate of incarceration in the world. Human Rights Watch reported that in seven states, African Americans constituted 80 to 90 percent of all drug offenders sent to prison, even though they were no more likely than whites to use or sell illegal drugs. Prison admissions for drug offenses reached a level in 2000 for African Americans more than 26 times the level in 1983. All of the presidents since 1980 have contributed to mass incarceration, but as Equal Justice Initiative founder Bryan Stevenson recently observed, "President Clinton’s tenure was the worst.”

White people got a chance to explore rehab, while people who look like me explored prison cells. Many African-Americans lost their sanity and sometimes their lives behind those walls. And successfully reentering society has been impossible for many of the people lucky enough to make it out alive. I challenge anybody in the job market without a prison record to check that box sometime. You'll find out why prison is a revolving door, and why so many why black men have trouble finding good jobs. The Clintons didn’t invent this reality, but they definitely amplified it, and only backed away from the "super-predator" talk when it became politically toxic.

RIP to my friend Noodle. He was a super-predator, from the Clintons' perspective. Noodle’s pops was murdered when we were kids, and his moms had a stroke -- she received a check but that only covered basics. He had three little brothers and sisters who were growing every day, and he had to feed them.

Noodle fell into the crack game face-first, from lookout, to "hitter" to handling money. He bought some sneakers, but no jewelry. He bought some nice clothes, but no Lexus. That 15-year-old bossed up and fed his family. He wasn’t out there banging guns and being a predator, but he lost his life two weeks before his 18th birthday.

Noodle, like many of us young black people, drowned in a storm we couldn’t handle. Of course you have some people out there selling drugs who don’t have to, unnecessary troublemakers. But that isn’t always the case. For every cold-hearted gangster you name, I can give you three nice guys like Noodle who were dealt a bad hand from a deck of systemic racism, white supremacy and the same bullshit that pushes poor black kids into the streets.

African-Americans don’t have an option in this election. Jill Stein is a wonderful person, but she’ll never win. Even if Gary Johnson had a chance, which he clearly doesn’t, he has no knowledge on the issues that affect us. Yes, he said "Black lives matter." So what, congratulations -- that’s a popular thing to say right now (if you're not a flat-out racist Trump Republican), but it doesn’t mean he understands the complex issues that oppress us. He doesn’t even fully understand white issues, getting stumped on every news show every time he pops up. It's like he doesn’t have cable or wifi.

I wish I could’ve had another 15 minutes with that dude from the train. I would’ve told him not to let social media, MSNBC, Bill Clinton, hip-hop artists or Trump jokes fool you. Black people are not on the Clinton train. We aren’t feeling Hillary. We're not "with her." We care more about Trump losing than her winning.