Trump drives the media nuts, literally: The Chicago Tribune's delusional Gary Johnson endorsement is a symptom of a deeper illness 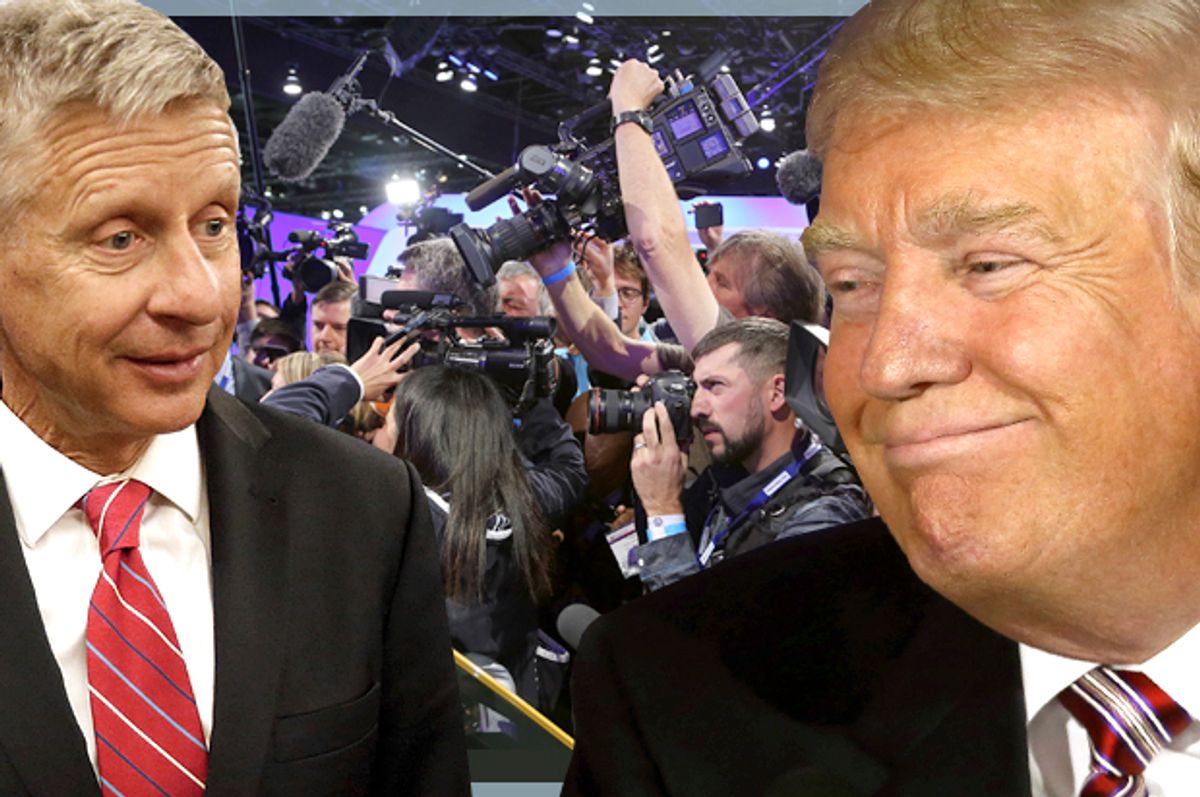 Many of us in the media have spent the last several months ritually abasing ourselves for our role in empowering Donald Trump’s rise, and not without reason. As I have previously observed, there’s an element of hypocrisy at work here, or maybe several different elements. For one thing, writing a bunch of stories lamenting how we failed to take Trump seriously enough or how we treated him as a sideshow attraction only feeds the Trump monster and adds to the Trumpian allure: He’s the alpha-male hero who defeated the cucks of the lamestream media!

For another, the deeply flawed social institution formerly known as the Fourth Estate is, as usual, exaggerating its own importance. While the symbiotic relationship between Trump and the media has been a central factor in his success, we definitely didn’t create Trump. He was the right person with the right message at the right time, even if the message was meaningless and the time was the Apocalypse. He hacked the media brilliantly by exploiting its well-known weaknesses: an appetite for spectacle over substance, and for colorful personalities rather than ideas.

If journalists became addicted to Trump and couldn’t break the habit, it was because everybody’s addicted to Trump; we swear him off with the morning hangover and promise a new beginning, only to go back for another fix later that night. Trump is a uniquely polarizing phenomenon who has fascinated, horrified and hypnotized the public like no political figure or cultural celebrity of recent memory. As has been widely observed, Hillary Clinton would be the most disliked major-party presidential nominee in political history — if Trump weren’t disliked even more. Anguished liberals who exclaim that if only the media had shown some dignity and ignored this nasty man he’d have gone away are, to put it gently, living in a fantasy world. It might be a better world than this one, for all I know, but there’s no visible pathway leading there from here.

I think the real problem is bigger and easier to summarize: Donald Trump has driven the media absolutely batshit insane. This descent into madness reached its horrifying and/or comical nadir this week, with the Chicago Tribune’s endorsement of Libertarian nominee Gary Johnson, the guy who doesn’t know where Aleppo is and could not name a single foreign head of state. If any major metropolitan newspaper has endorsed a third-party candidate since, I don’t know, the days of Teddy Roosevelt and the Bull Moose Party, I’d be surprised. Endorsing this particular one, a genial nonentity from New Mexico who suggests a hardware-store manager with “quirky” opinions, is a sign of dementia and despair.

Now, we do have to put this baffling decision in context: The Tribune, once the flagship publication of a major media corporation and the journalistic bulwark of a great American city, has fallen on hard times. It’s a shell of its former self, and the shell has been pecked full of holes by mangy Lake Michigan gulls. Whichever editor was responsible for this undeniably daring outside-the-box Gary Johnson brainstorm quite likely used to work at a paper that had the words “tri-county” and “shopper” in its title, collating gardening tips and hassling other employees about breadcrumbs on the floor. (WE TOTALLY HAVE A MOUSE PROBLEM YOU GUYS!!)

OK, that’s kind of a mean joke — but the Tribune’s Johnson endorsement is a joke too, a sad and stupid joke inflicted on the people of Chicago and America. “We reject the cliché that a citizen who chooses a principled third-party candidate is squandering his or her vote,” wrote the Tribune’s editorial board, or perhaps a 19-year-old Ayn Rand-reading intern who hacked into the production system. “We offer this endorsement to encourage voters who want to feel comfortable with their choice. Who want to vote for someone they can admire.” That’s an admittedly bold sentence fragment, but not one that expresses anything useful. Anyone reduced to admiring the vague and ignorant pronouncements of Gary Johnson, who isn’t quite sure whether climate change is really happening or whether women have an inherent right to make their own reproductive decisions, is in a dark and dangerous mental space.

What really happened, of course, is that the Trib — like a handful of other publications that have endorsed Johnson, including the Detroit News and the Richmond Times-Dispatch — belongs to the fading gerontocracy of old-line Republican newspapers, but its owners can’t stomach Donald Trump. You could faintly argue that’s to their credit but, honestly, it’s not. I can sympathize with the difficulty involved in pulling the lever for Hillary Clinton, or encouraging others to do so. (I live in New York, and don’t have to. Ha!) But this election offers us a choice between a reasonable and responsible adult with various well-known flaws and a person who is almost literally a black box. OK, he’s not literally a black box: Literally Trump is orange, and molded out of some new polymer or perhaps leftover Reagan-era government cheese. The point is, we don’t know what’s on the inside, but it isn’t something good: millions of poisonous centipedes, a ticking bomb, that thing from “Alien” with the face of Vladimir Putin. If you’re the kind of publication that does presidential endorsements (which, for the record, Salon isn’t), then telling your readers to stay home and play Yahtzee instead of facing that choice is irresponsible.

So Donald Trump drove the editors of the Chicago Tribune insane, and now they’re whimpering in a cave somewhere, trying to warm the desiccated corpse of the Republican Party by spooning with Gary Johnson. One could argue that Trump has driven the entire country insane too and that media madness is just one manifestation, but that’s putting the cart before the horse. America was crazy already, and the specific grade of American crazy that Trump has channeled — fearful, mistrustful and closed-minded, with more than a hint of apocalyptic Protestant theology — goes back for generations, probably all the way back to our Plymouth Rock prehistory. When operating in its somewhat coherent and professional 20th-century mode, the media has at least tried to act as a counterbalance to that tendency, even if its moments of Edward R. Murrow or Pentagon Papers-style courage have been sporadic at best.

Now we find ourselves in a historical moment when the so-called major organs of journalism have lost much of their audience and most of their influence, and have no idea what to do about it. Pilloried earlier in the campaign season for treating Trump’s ludicrous counterfactual assertions about Mexicans, Muslims, crime, the economy and virtually everything else as if they were topics for legitimate debate — the sin Brooke Gladstone of NPR calls “fairness bias” — the New York Times has now struck a more confrontational tone in its Trump coverage. All that does, of course, is to solidify the right-wing perception that it’s a liberal rag spreading America-hating lies. (The spunky newcomers of the alt-right will say much more than that about the perceived ethnic background and sexual orientation of the Times’ editors and reporters, but I’ll allow you to fill in the blanks yourself.)

Matt Lauer got so badly bulldozed by Trump in that town-hall event two weeks back that he made Lester Holt’s prep-school headmaster act in the first Clinton-Trump debate look heroic. Jake Tapper of CNN has done numerous interviews with Trump, and always looks grateful to have survived them. MSNBC’s feeble and self-congratulatory efforts to destroy Trump always involve saying the same obvious things over and over again, to an audience that will never possibly vote for him. As this weekend’s exhaustive and exhausting New York Times Magazine story about the Trump-fueled infighting in right-wing media makes clear, Trump has driven Fox News crazy too, redundant as that may sound. His allies and supporters have thoroughly infiltrated and undermined the GOP’s house network, which resisted him mightily at first and would have preferred any other Republican candidate, down to and including George Pataki and the guy from the Rent Is Too Damn High Party.

Maybe something good will come out of the way Donald Trump has stripped the minions of the mainstream media naked and sent them blubbering and wailing down the street. I just don’t know what that would be. A renewed sense of mission and purpose among the survivors? A recognition that if you kiss up to the famous and the powerful, sooner or later you wake up in a distant city, wearing only socks, with unidentifiable orange goo all over your face? That seems like too much to hope for, but in any case the first step toward healing the media’s collective mental illness lies in facing what is actually happening right now. Endorsing Gary Johnson, or refusing to endorse anyone — as USA Today has done — stems from the understandable impulse to close one’s eyes while the bad man is doing the bad thing and wish it away. Monsters aren’t real, right? When we wake up, everything will be OK. Well, that’s not good enough: The job of journalism is supposed to be about opening your eyes and facing the monsters, and coming as close as you possibly can to telling the truth. We haven’t been doing that, and dear Jesus, have we paid the price.