Defined by her dress size: "This Is Us" is NBC's best new show — and it has a fat-shaming problem

"This Is Us" is being lauded as an empathetic character-driven drama. But one character is just a number on a scale 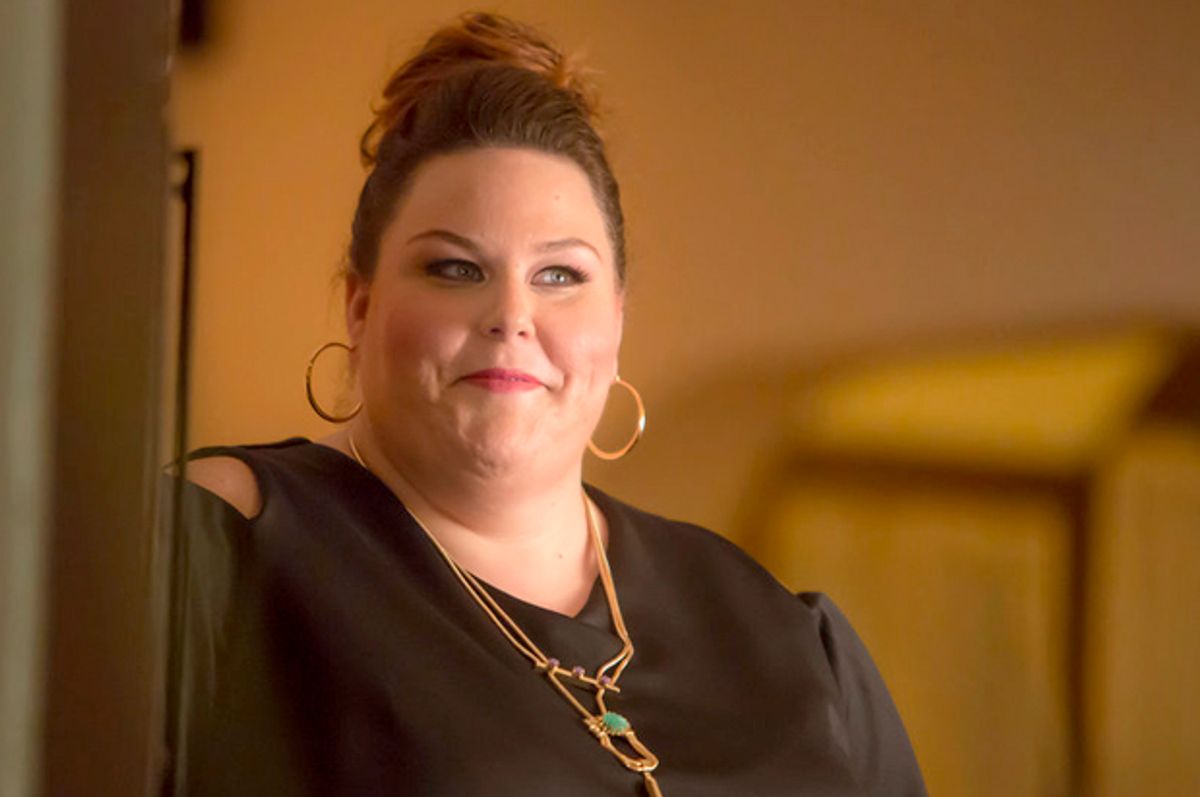 It’s the worst part of one of fall’s best new shows.

NBC’s “This Is Us,” created by Dan Fogelman (“Crazy, Stupid, Love”), picks up where the recently cancelled “Parenthood” left off. The show is a heartfelt story of intergenerational families dealing with everyday difficulties, one that mixes laughter with tears. (Read Salon TV critic Melanie McFarland's review.) In the pilot, viewers are introduced to Randall (Sterling K. Brown), an adoptee who has recently tracked down the addict father who abandoned him as a newborn. There’s also Jack (Milo Ventimiglia) and Rebecca (Mandy Moore), a young couple who are expecting triplets.

Lastly, Kevin (Justin Hartley) and Kate (Chrissy Metz) are twins with little in common except a womb: He’s the handsome star of a broad laugh-track comedy he hates (called “The Manny”), and she’s overweight.

What distinguishes “This Is Us,” which has already proven to be a breakout hit for the network after two episodes, is the show’s raw empathy for its characters. Rebecca, after giving birth, is frustrated that her husband isn’t pulling his weight around the house. Jack would rather be the “Cool Dad” than lend a hand when she needs it. She’s a 10, Rebecca tells him, and she needs her partner to be at her level. He tells his wife that he’s ready to be an 11 for her — if that’s what it takes to keep their family together.

Brown, who just won an Emmy for “The People v. O.J. Simpson,” is particularly strong as a man divided by his own feelings. Randall knows he should tell his deadbeat dad to get lost. Why then does he invite the man into his home?

Most of the characters in “This Is Us” are flawed and complex, acting in ways that are contradictory yet relatable. It’s too bad that the show doesn’t extend the same courtesy to Kate, who is solely defined by her weight. The other characters in the show have goals, dreams and aspirations. Kevin, who ends up a viral sensation after having an expletive-laden meltdown on his show, wants to do something more meaningful than star in a crappy sitcom. Maybe he’ll pursue Broadway, he wonders aloud.

The only thing viewers know about Kate, the least developed person on the show so far, is that she’s fat and she hates it. After years of being unhappy with the person she sees in the mirror, Kate vows to lose the pounds.

There’s nothing wrong with telling stories about people who don’t like the way they look. “This Is Us,” however, is sending the wrong message to a population that’s already widely stigmatized and shamed on television. Although shows like ‘The Mindy Project,” “Drop Dead Diva,” “Roseanne,” and “Parks and Recreation” have helped further positive visibility for people of non-sample size, characters with larger bodies are frequently mocked — depicted as nothing more than walking punchlines.

When TV writers and producers portray women like Kate as laughable or pathetic, they are sending the message that people who look like her should feel bad about it. “This Is Us” ends up hurting the very population it wants to represent.

Kate’s story is a personal one for Fogelman. The prolific writer/producer, who is also behind TV’s “Galavant” and “Pitch,” based the character on his sister, who has struggled with negative body image her entire life. And Metz said that the storyline also resonates with her journey as a plus-size woman. “A lot of people [have these issues], and I have myself,” the 37-year-old actress told SheKnows. “So this is a story that needs to be told because there are people who find their self-worth in the number on the scale.”

Weight-loss narratives abound in a society obsessed with the spectacle of big bodies (see: “The Biggest Loser”), but these storylines are rarely handled with care. On the sixth season of the long-running NBC sitcom “Friends,” Monica Geller (Courteney Cox) is revealed to be a teenage overeater when the Central Perk crew watches a home video of Monica attending her prom. Attempting to explain away the difference in her appearance, Monica says that the camera adds 10 pounds. “So how many cameras are actually on you?” Chandler quips. Stunned by what he’s seeing onscreen, Joey stammers, “Some girl ate Monica!”

Fox’s “New Girl” also revealed its resident metrosexual, Schmidt (Max Greenfield), to have been much heavier in college. “Fat Schmidt” has become a favorite running gag of the six-year-old sitcom, and has even been turned into a series of GIFs.

When audiences are invited to laugh at fat people, we see them as less human. The Farrelly Brothers’ “Shallow Hal,” perhaps the most egregious example of fat-shaming in pop culture, wants to have it both ways. A chauvinistic jerk, Hal (Jack Black), is cursed with only seeing others’ inner beauty after a visit to guru Tony Robbins. When he meets Rosemary (Gwyneth Paltrow), he pictures her as thin and attractive  — someone who looks like, well, Gwyneth Paltrow. His friends, however, treat her with disgust and contempt, as if she were an untouchable.

Hal might see the gorgeous woman inside, but the film continually underscores that Rosemary’s body is her reality. When she sits down on a chair to eat lunch, Rosemary breaks it into a million pieces. When she and Hal enjoy a romantic boat ride, the gondola tips like an aquatic seesaw.

Following a wave of body-positive programs like “My Mad Fat Diary” and “Huge,” “This Is Us” represents a step backward, a show that asks us to both root for Kate and pity her.

Viewers meet Kate, who doesn’t seem to have a job to speak of, after she has fallen down in her bathroom. Like the old lady in the Life Call commercial, Kate calls her brother for help. When she goes to the fridge to eat her feelings later in the episode, there’s a note warning her that she made a promise to herself to get healthy. She rips off the Post-It, revealing an identical one underneath.

The audience is meant to find these moments both sad and funny, underscoring that the character isn’t someone we should want to be like. Kate is a person the viewer should feel sorry for.

Things improve when she meets a self-described “fat friend” in her support group, Toby (Chris Sullivan), who has a more positive outlook on his size. Toby, who regularly pokes fun at the other members of their circle, openly states that he may never be thin. But after Toby makes his romantic interest in Kate clear, she rebuffs her new acquaintance. “I can't fall for a fat person right now,” Kate says. “Guess I'll lose the weight then,” he responds.

The blossoming couple’s interactions are warm and deeply felt, and it’s refreshing to see plus-size characters — especially ones falling in love — portrayed onscreen at all. (“Mike and Molly,” the CBS show starring Melissa McCarthy that ended in May, was an exception to that rule.) It’s disappointing, though, for “This Is Us” to treat these moments of Kate grappling with her self-worth as the only ones from the vastness of her lived experience that matter. “It’s always going to be about the weight for me,” Kate tells Toby. “It’s been my story ever since I was a little girl, and every moment that I’m not thinking about it, I’m thinking about it.”

By treating Kate’s weight as a shameful burden — as well as her only personality trait — ”This Is Us” serves to reinforce the harmful messages people of size are constantly fed on television, often from a young age.

A 2014 study in the International Journal of Eating Disorders showed that children are most vulnerable to fat-shaming in media. Marla Eisenberg of the University of Minnesota and her team found that programs aimed at a youth audience (e.g., “SpongeBob SquarePants” and “iCarly”) were the most likely to contain negative messages around body image. Of the 30 shows Eisenberg surveyed, there were 66 instances of characters making shaming comments about others’ appearance. The overall rate of body negativity was 52 percent higher in kids’ shows than ones created for adults.

If children begin internalizing these messages at a young age, what impact does it have on them? Spoiler: It’s not good.

Researchers from Harvard Medical School famously studied the effect of U.S. television shows like “Melrose Place” and “Beverly Hills 90210” on the indigenous culture of Fiji, where “you’ve gained weight” is considered a compliment. Three years after the soaps began broadcasting in the island nation, the rate of eating disorders skyrocketed. In 1998, 15 percent of young girls “reported that they had induced vomiting to control their weight . . . compared with 3 percent in the 1995 survey,” as the New York Times reported. Overnight, bulimia went from being virtually unheard of to a national epidemic.

Shows that promote one definition of female beauty — looking like Heather Locklear, not Chrissy Metz — do little to help anyone be healthier. Numerous studies have shown that fat-shaming simply isn’t effective and only serves to make the problem worse. People who are discriminated against because of their size often report feeling discouraged from exercising or eating healthy, thus increasing the likelihood that they will gain additional weight. Promoting negative body image, it would seem, only creates more negativity.

In the case of actor Wentworth Miller, being body-shamed on the Internet only added to his feelings of depression and worthlessness. The openly gay actor became a meme when a before-and-after photo of the extra pounds he gained after leaving Fox’s “Prison Break” went viral. Miller, who was suicidal at the time, said that the mockery only exacerbated his isolation.

“This Is Us,” which airs its third episode Wednesday, still has time to get it right. Metz explained that the goal with Kate’s storyline is to examine the feelings of insecurity that drive her to use overeating as a source of comfort. “While I know that food is not the issue, it’s the symptom,” Metz said. “People fill voids in their lives, and Kate happens to fill it with food.” That may be true, but the Kates of the world deserve to have the multiplicity of their struggles represented, instead of repeating the same old story. Fitting into a little black dress is great, but being seen as a whole person is even better.

Fat Shaming Healthy At Any Size Nbc This Is Us Tv