In Ash we trust: "Ash vs Evil Dead" returns in our darkest hour to save us

Our nation may not agree on who should lead us. But when it comes to heroes, Ash Williams is our populist savior 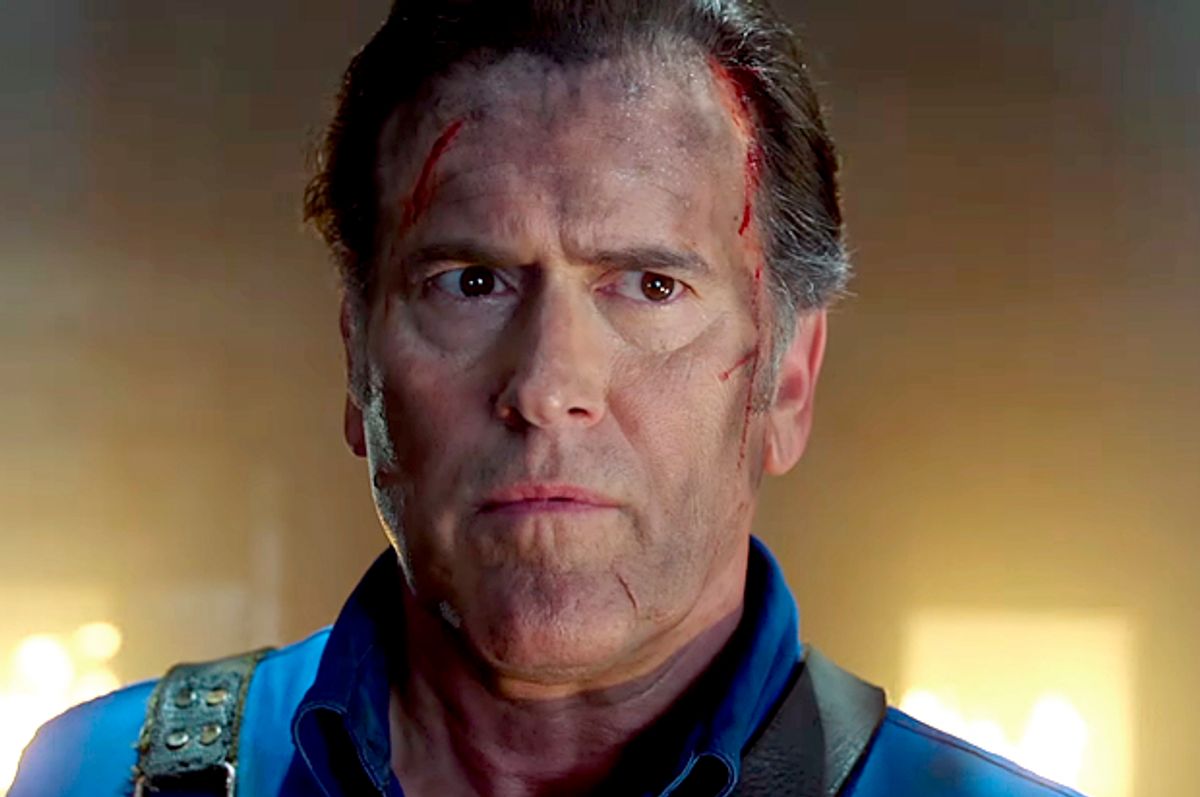 Starz’s horror comedy “Ash vs Evil Dead” returns at a fascinating time, when you think about it.  The country is ferociously divided along political and cultural lines, tense with fear about what the future holds. The words “disastrous” and “apocalypse” are tossed around in discussions about the future.

The horror film genre reflects this collective angst, with evil taking the forms of malicious spirits (“The Conjuring 2,” “Blair Witch,” “Ouija: Origin of Evil”) and psychopaths (“Don’t Breathe,” “The Purge”) where, in past years, zombies or vampires ruled. Whether referring to cinematic terror or worrisome politics, the common factor is that there’s no single soul we, the people, can agree to task with our safekeeping and salvation.

Except for Ashley J. Williams.

Without Bruce Campbell as Ash, “Evil Dead” likely would have remained one of the early-’80s splatterhouse flicks that indie filmmakers revere as inspirational to their craft. But Campbell molded Ash into a hero for the average guy by tempering the story's adrenaline-spiking frights and nausea-inducing gore with a performance steeped in expressive slapstick. Demon vomit, hellish effluvia, barrels of limbs and spilled bowels, all of this and more were prominent in 1981’s “Evil Dead” and its 1987 sequel, “Evil Dead II.” In encouraging us to laugh at the disgusting effects, Campbell’s Ash made the franchise’s outrageous shocks manageable.

In amplifying Ash’s cartoonish alpha-male charisma to greater extremes in 1992’s “Army of Darkness,” the actor ensured Ash’s appeal would age like a fine Midwestern cheese until, at long last, we’d be ready for him once again.

What creators Rob Tapert and Sam Raimi could not have known was how ideally a middle-aged Ash would meld with America’s sensibilities — especially in the tauter, more humorous second season of “Ash vs Evil Dead,” premiering Sunday at 8 p.m. on Starz.

Ashley J. Williams may not be the hero America needs the most right now; that mantle belongs to a certain bulletproof man on Netflix. Rather, he’s the populist savior we may not realize we’ve wanted, a unifying force that viewers of any political stripe can support. Allow us to count the ways.

1. Ash is an outsider, fueled by carefree bluster

Popular culture is lousy with heroes watching over large metropolitan areas. But havoc sustained by the nation’s small towns, the frequently touted “real America,” goes unchecked for the most part. That may add to Middle America’s identification with self-sufficiency; left to fend for themselves, smaller towns take care of their own.

Ash, a slacker who only has love for his raggedy Oldsmobile Delta 88 and his pet lizard Eli, isn’t going out of his way to change that idea. He’s completely uninterested in helping anyone else unless the evil book that opened a portal to Hell, the Necronomicon, makes their problems his.

As season two starts, Ash has all but shirked his calling to save the world from being overrun by demonic Deadites, having handed the reins over to his nemesis Ruby (Lucy Lawless). Since then, he’s settled into an endless party in Jacksonville, Florida, with several states between him and his reluctant companions and clean-up crew Kelly Maxwell (Dana DeLorenzo) and Pablo Bolivar (Ray Santiago), and the evil dead invasion.

Deadites don’t sleep, and soon Ruby summons the trio to Ash’s childhood hometown of Elk Grove, Michigan. Ash’s journey isn’t motivated by altruism; he just wants to right the ship and get back to Jacksonville’s endless buffet of alcohol and women with no standards as soon as he can.

Showrunner Craig DiGregorio reintroduced viewers to the “Evil Dead” universe while greatly expanding the mythology during the series’ energetically uneven first season. Unfettered by those obligations to establish plot and character, the story hits the gas immediately in season two, immediately juicing up the excellent comedic chemistry between Campbell, DeLorenzo and Santiago while taking the story into fraught emotional spaces for Ash.

2. Ash lives in nostalgia while yearning to forget the truth of his past

The dominant culture’s collective romanticizing of how things used to be is playing a huge role in worsening the nation’s divisions. But for Ash, nostalgia helps him feel his oats and gets him through the day. It’s harmless, allowing him to live his life to a 1970s soundtrack as if he’s still in his prime.

Do not mistake Ash’s adoration for butt rock and cheap beer with wistfulness. The viewer soon comes to realize Ash’s personality is frozen in adolescence for a reason, as if it's clinging to the best parts of his life prior to that fateful trip to the woods.

Ash’s homecoming reveals his status as a pariah, too. The entire town knows him as Ashy Slashy, and his father Brock (Lee Majors, playing up his dirty old man shtick with delightful aplomb) lives in the crumbling aftermath of his son’s alleged misdeeds.

Even as Ash is being tormented by his former classmates and neighbors, Campbell doesn’t spend much time working to elicit sympathy for the hero. Why bother? He’s got a chainsaw hand, a shotgun he fondly refers to as his boomstick, and a job to do. Plus, he still has a couple of childhood friends in his corner, including his best friend Chet (Ted Raimi) and his high school crush Linda B. (Michelle Hurd).

On one end of the moral and political spectrum are people who are highly educated and tout the virtues of voting ethically while thinking globally. On the other are those who can’t wait to bill Mexico for our border wall and who believe global warming is a Chinese hoax.

Ash sits somewhere right in the middle, although if he were real, he’d have no opinion on climate change as long as it didn’t negatively impact the availability of weed and beer.

A sizable share of our fascination with Campbell’s character lies in the fact that he is just a normal, entertaining man of slightly below average intelligence, who is unquestionably good. And once he commits to a task, he is dedicated to a fault. “Let me tell you something: Ash Williams doesn’t know the meaning of a lot of words,” he brags, “but I really don’t know the meaning of ‘fail.’”

In so many recent discussions about race and gender dynamics, many of us have had to come to terms with the idea that there’s a difference between out-and-out bigots and sheltered folk who mean well. Ash embodies the latter on an outsized scale.

He definitely sees color, but doesn’t care one way or another. He loves women, even though female strength — especially Ruby’s physical prowess — intimidates him. At the same time, Kelly is no retiring flower, and Ash treats her with a fraternal protectiveness and respect. He inspires Pablo to find his bravery, even as he ascribes jokes about Mexican culture to his friend . . . who happens to be Honduran.

Ash is that guy who’s oblivious to the nuances of culture and thinks with the brain in his pants, but knows that the real battle is not with his neighbors. Given what he does while tangling with vastly more malignant forces, why not let him make a few stupid, off-color jokes?

5. Ash isn’t afraid to get his hands dirty. Or his face, arms and torso

For a number of us, our ultimate decision as to who wins our votes comes down to determining which candidates are most willing to roll up their sleeves and get their hands dirty to serve the greater good.

Ash is a man so used to being covered in pulverized guts and satanic goo that he doesn’t even flinch at direct hits in the face with some of the worst fluids imaginable.

As gross and gory as season one proved to be in this regard, season two somehow tops it within minutes of the premiere’s opening. Slime and muck of every color and consistency blasts out of a variety of evil orifices, testing the digestive fortitude of even the most hardened viewers. (And the second episode showed me things about the human colon that will haunt my nightmares for the rest of my time on this Earth.)

It’s a scary time, people. No sane person would argue to the contrary. But for those of us who take an admittedly odd comfort in watching our devils made flesh, dismembered and defeated, accepting Starz’s invitation to ride with “Ash vs Evil Dead” may be the perfect weekly escape.