Own up to NAFTA, Democrats: Trump is right that the terrible trade pact was Bill Clinton's baby

If the Democrats want to reclaim a progressive identity, they must own up to the dreadful mistakes of the past 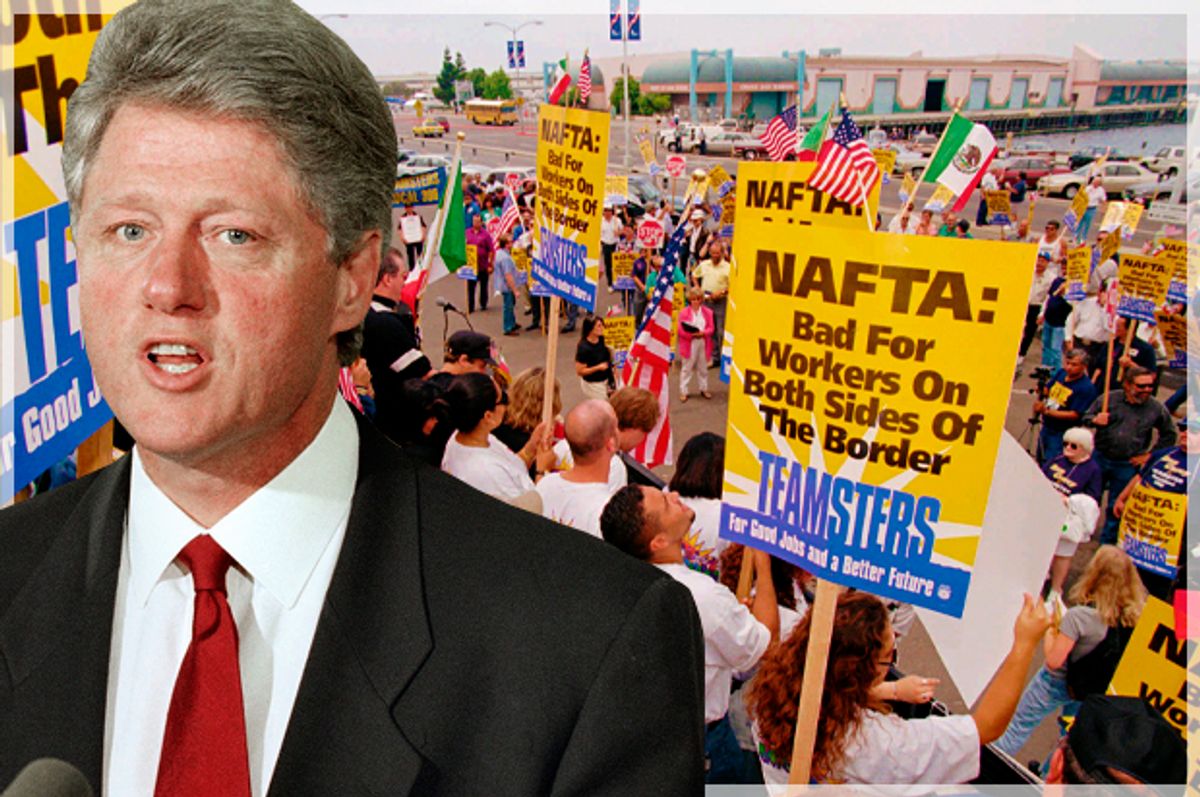 The usually whip-smart Rachel Maddow made a mind-boggling error the day after the Clinton-Trump debate. Her first 14 minutes were fine, but when she turned to fact-checking Trump, the first of the "untrue things" she chose to correct was not untrue at all. "Bill Clinton did not sign NAFTA," Maddow said. “George H.W. Bush signed NAFTA.”

Actually, it was both. Bush signed the treaty with Canada and Mexico in December of 1992 (his final month in office), and Clinton immediately pledged not to renegotiate it. Less than a year later, on Dec. 8, 1993, Clinton signed the treaty into law. Neither signing was perfunctory or irrelevant. Both were necessary. Clinton absolutely did sign NAFTA.

Trump is certainly wrong to assign Clinton sole or even primary responsibility for that much-villainized trade agreement. But Clinton not only willingly signed it, he fought hard to get it passed. During the 1992 campaign, Clinton had pledged to get side agreements in the implementation process to provide job and environmental protections, which critics warned would be doomed to fail. The day Bush initially signed it, Clinton said “I will pursue those other things that I think need to be done in the public interest, then I will prepare implementing legislation and try to pass it in Congress."

Clinton struggled to get NAFTA through Congress, arm-twisting a lot of reluctant Democrats in the process. This is especially evident in the House roll call vote, where Republicans voted for NAFTA by a huge margin, 132-43, while Democrats voted against it, 156-102. It was dramatically more lopsided in the Rust Belt states so much in the spotlight today: All 11 House Democrats from Pennsylvania voted against NAFTA, as did all 10 Democrats from Michigan and eight of the 10 from Ohio. Republican members from those states largely voted for it. At the time, it was widely conceded that the Democratic House would never have passed NAFTA if Bush had been re-elected and submitted it himself.

The signing ceremony was attended by three former presidents — Ford, Carter and Bush — and Vice President Al Gore cited their attendance as “evidence of our country's ability to support what is in our nation's best interest over the long term without respect to partisanship." Clinton himself promised that “NAFTA means jobs. American jobs, and good-paying American jobs. If I didn't believe that, I wouldn't support this agreement …. I believe that NAFTA will create a million jobs in the first five years of its impact. And I believe that that is many more jobs than will be lost.” He was dead wrong in thinking that way, of course. But he was hardly the first.

NAFTA did not begin with Bush, or any of the other ex-presidents on hand that day. Its origins date back to Ronald Reagan's 1980 campaign, when he ran on creating a North American common market. Kicking off his campaign on Nov. 13, 1979, Reagan said:

Within the borders of this North American continent are the food, resources, technology and undeveloped territory which, properly managed, could dramatically improve the quality of life of all its inhabitants …. A developing closeness among Canada, Mexico and the United States -- a North American accord — would permit achievement of that potential in each country beyond that which I believe any of them — strong as they are — could accomplish in the absence of such cooperation.

Reagan was suitably vague about what this accord would look like or when it would be realized, but by 1983 legislation was introduced, and in 1984 Congress passed the Trade and Tariff Act, giving the president "fast-track" authority to negotiate trade agreements, with only an up-or-down vote by Congress. In other words, legislators voted to strip themselves of their constitutionally mandated task of debating and negotiating trade deals with other countries. This in turn set the stage for the Canada-U.S. Free Trade Agreement, signed by Reagan in 1988, which went into effect in 1989. Bush followed up by negotiating NAFTA, which then superseded it.

Such are the actual origins of “the worst trade deal maybe ever,” as Trump called it during the debate. All this is a bit like being reminded that George Washington owned slaves: an inconvenient truth for just about everyone in politics. That includes Trump, since it puts him in opposition not just to the widely derided Bush dynasty but also to the hallowed St. Ronnie. And it goes double for Hillary Clinton, and the rest of the Democratic establishment, because it underscores how willingly and fundamentally they signed onto Ronald Reagan’s business-friendly worldview.

If Democrats want to move on, and shape a new politics for the future, they must first own their past mistakes: NAFTA, welfare reform, mass incarceration, financial deregulation and so on -- the whole spectrum of neoliberal policies enacted under Bill Clinton despite fierce opposition from many, if not most, congressional Democrats, as well as the people they represented. It's no good trying to foist those policies off on Republicans: The Clinton White House drove Democrats hard to support them, despite the resistance of the party rank-and-file. Well, the party rank-and-file was right.

In late 2013, just before NAFTA turned 20, Jeff Faux, founder of the Economic Policy Institute, wrote an assessment of its impact, calling it “A Template for Neoliberal Globalization.” He highlighted four main ways NAFTA had impacted American workers:

First, it caused the loss of some 700,000 jobs as companies moved their production to Mexico, where labor was cheaper ….

Third, NAFTA drove several million Mexican workers and their families out of the agriculture and small business sectors, which could not compete with the flood of products — often subsidized — from U.S. producers. This dislocation was a major cause of the dramatic increase of undocumented workers in the United States ….

Fourth, and ultimately most importantly, NAFTA created a template for the rules of the emerging global economy, in which the benefits would flow to capital and the costs to labor. Among other things, NAFTA granted corporations extraordinary protections against national labor laws that might threaten profits, set up special courts — chosen from rosters of pro-business experts — to judge corporate suits against governments, and at the same time effectively denied legal status to workers and unions to defend themselves in these new cross-border jurisdictions.

Regardless of what the unicorn-like intentions were, these are the fruits of NAFTA, the fairy-tale vision that began with Ronald Reagan. For almost a quarter century now, America’s elites have been in denial — not just about NAFTA, but about the whole bipartisan neoliberal agenda — and this election cycle has been a rude semi-awakening. Bernie Sanders presented a rational, fact-based critique from the left, while Donald Trump has followed up with an unhinged fantasy diatribe from the right.

One way or another, the accumulated pain and suffering of America’s workers cannot be avoided any longer. The only way to counter the atavistic irrationalism on the right embodied by Trump is with workable solutions that address that pain and suffering — the sorts of solutions that Sanders advanced. It’s time for the Democrats to stop being the me-too party of Reagan.

That will require an honest acknowledgement of past mistakes, including the mindless touting of bipartisan agreement, which blinded everyone involved to the costs they were ignoring. Acknowledging past mistakes is the only way to learn from them. When it comes to terrible trade deals, we need to learn fast.