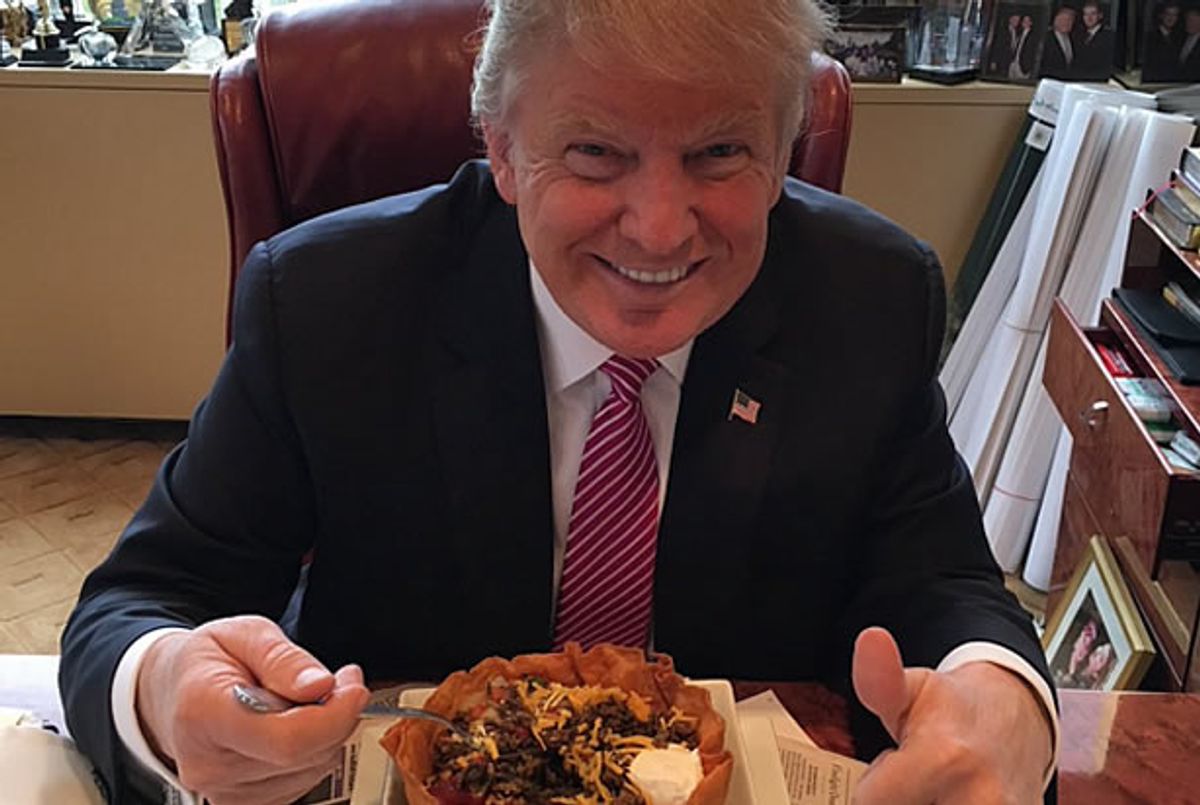 In 2010, the Hindu American foundation launched a campaign titled “Take Back Yoga.” As the New York Times described it, the campaign did “not ask yoga devotees to become Hindu, or instructors to teach mo­re about Hinduism...the group...suggests only that people become more aware of yoga's debt to the faith's ancient traditions.” I thought of the campaign this week when, flipping through radio stations, I caught a white Trump supporter on NPR complaining about the impact of immigration on American culture, bemoaning how much the country had changed since she was a child, worried it would change more still by the time her children reached adulthood. The interview took place at a juice bar; she'd popped in on her way home from yoga.

I thought, especially, of how a few white friends had sent me the article aghast, expecting me to roll my eyes at the silliness of the notion. (They were thinking, perhaps, of my near-fanaticism about yoga, and how ferociously and frequently I tried to drag them along to class.) Instead, I drew their attention to a quote in the article from a second-generation Indian-American parent. “We started this, really, for our kids,” he said. “When our kids go to school and say they are Hindu, nobody says, ‘Oh, yeah, Hindus gave the world yoga.’ They say, ‘What caste are you?’ Or ‘Do you pray to a monkey god?’ Because that’s all Americans know about Hinduism.” The description was consistent, I told them, with my own experience.

None of us anticipated, of course, that six years later our conversations about cultural appropriation would take place against a vastly different backdrop. One in which a wealthy white woman on her way out of yoga endorsed, via thinly veiled racism, about the rapid transformation of her country which immigration had wrought. Or a Trump supporter, Latino himself, fretted about the “aggressive” nature of his own culture, and warned of a hellish Clintonian dystopia complete with “a taco truck on every corner.” Or his favored candidate shouted too loudly, aggressively, even, about his supposed love of Hispanics, forcing a smile while seated in front of a taco bowl from his eponymous restaurant.

But, in retrospect, perhaps if we'd taken more seriously the pleas of minority communities to give credit where credit is due, we might not have found ourselves in this mess. Regardless, the conversations are all the more pressing today, if long overdue.

When the issue of appropriation is raised, it is generally met with a set of twin criticisms. Those who fancy themselves liberals often suggest that it's precisely this kind of petty grievance that distracts from real issues and alienates moderate whites. Others argue that cultural appropriation is a feature of a pluralistic society, that American culture has absorbed the best of the cultures belonging to the immigrants it has welcomed in the past. It is this very evolution, it's worth noting, which the yoga-doer complained about with no apparent sense of irony.

The criticisms are often frustrating to those of us who weren't beneficiaries of a culture which fostered in these defensive proponents of appropriation a sense of white entitlement, who don't feel that we are entitled to do, say, and eat whatever we want with whatever attitude we choose to do it. Indeed, part of the frustration stems from the fact that the same practices and traditions which white people enjoy to the benefit of their hip and tolerant brands are practices and traditions which young brown children were mocked for indulging in, which were used as evidence that they weren't working sufficiently hard at assimilating. It's hard not to flinch when white acquaintances eagerly brag about having ordered Chicken Tikka Masala the other night, knowing that white classmates once refused to come over for playdates because they'd heard my house smelled like curry.

And what we complain about when we complain about appropriation isn't so far removed from this base, emotional reaction that results from traumatic instances of overt racism. In fact, the entire practice of appropriation stems from, is grounded in, white supremacy. The very reason that people who hate Indians still feel comfortable practicing yoga is that, when the practice was popularized in the West, immigration from Asian countries, including India, was severely limited due to unabashedly racist laws. As is true of so many cases of cultural contact, what resulted from unfair circumstances was not an exchange, but an acquisition: white people unilaterally benefitted from their brushes with Indian traditions, profiting economically and, yes, culturally as a result.

The ultimate goal is not to stifle white Americans but offer greater freedom to their non-white fellow citizens. It's evident from the qualifications the Take Back Yoga campaign offered years ago — non-Hindus needn't convert to Hinduism to enjoy the practice, they should simply be aware of its origins. This awareness is crucial to dismantling the white supremacy which precludes a more equitable cultural exchange. Without it, the very customs absorbed from others are pointed to as examples of America's inherent greatness — a greatness that stems from the superiority of one culture over another, and complains of that culture's contamination should it renounce control. It allows us to absorb those customs with no meaningful contact with or exposure to people who don't look or talk or act like us, to view these differences as flaws or threats, rather than opportunities to not just teach, but learn.