Election blindness: It's the end of the world economy as we know it — and we feel fine 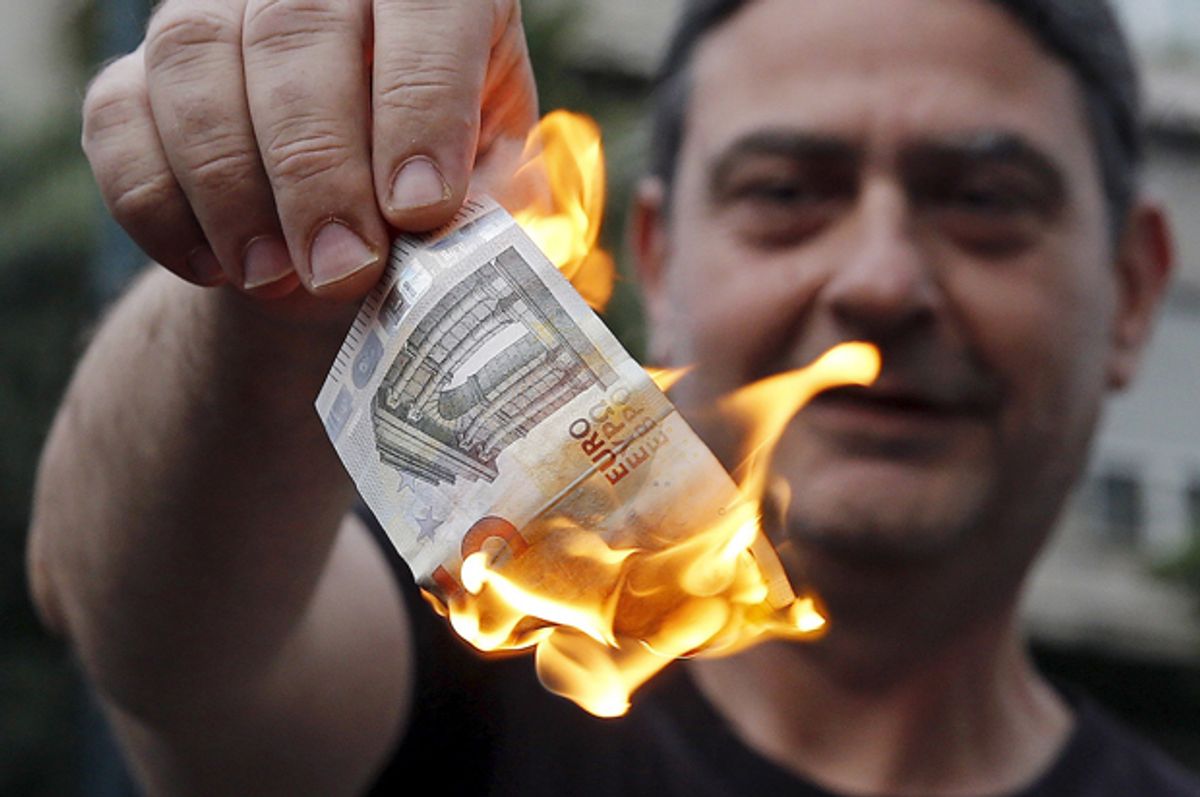 As the World Bank and the International Monetary Fund convene this week in Washington for their annual meeting, there is growing evidence that the post-World War II global consensus that created them is unraveling, right at the time when the global economy is facing major economic headwinds that have been decades in the making.

This great uncoupling, comes as global economic growth and trade numbers continue to disappoint and central bankers in Europe, Japan and the United States have run out of ideas about how to restore their economies to the pre-2008 meltdown expansion rates. Now, they fret over the possibility of a global recession mired in trillions of dollars in public and private debt.

A recent report from the McKinsey Global Institute, “Poorer than their parents? Flat or falling incomes in advanced economies,” documents how the post-World War II capitalist wealth engine — which delivered increasing prosperity for each successive  generation — has gone off the rails. According to the think tank, in two-thirds of the households in 25 advanced economies, household incomes were flat or had declined.

This sobering news will only contribute to fading faith in the neo-liberal post-World War II belief that only ever increasing volumes of global trade, facilitated by the likes of the World Bank and the IMF, can deliver a broad-based prosperity.  These seismic rumblings manifested in the vote by Britain’s electorate to leave the eurozone over the dire warnings of the IMF and even President Barack Obama.

While some observers may want to believe that the pushback against international multilateralism is solely the consequence of xenophobic racism, there’s also the distinct possibility that the failure of these institutions to deliver global stability or broad-based prosperity is an issue.

Here at home, the global trade model that the World Bank and IMF have promoted as the foundation for a more prosperous world has been rejected as a con job by many voters who have witnessed the hollowing out of so many American cities, once hubs of innovation and industry.

The fact that this deliberate deindustrialization was accompanied by historic wealth concentration at the top and massive amounts of government debt has helped fuel Donald Trump’s populist hijacking of the GOP and Sen. Bernie Sander’s spirited challenge to former secretary of state Hillary Clinton.

And just what was all that debt buying us? A brand-new infrastructure? Never-ending wars that destabilize more and more of the planet and prompt our soldiers to commit suicide? You can’t help but feel that we are on a runaway train where the engineer is texting.

Our global high-anxiety moment, to which so much of our nation remains oblivious, is the result of a confluence of trends that transcend the economic cycle. In developed economies, aging populations, globalization and automation are all taking their toll.

In some places the onset of global warming, in terms of rising sea levels and changing weather patterns, is already being felt. At the same time, several prolonged regional armed conflicts have gone on for so long, they have now undermined nation states and the rule of law.

Meanwhile, the acceleration in global wealth inequality is shaking faith in multilateral groups like the World Bank and the IMF.  While their stated policy mandate includes rhetoric about promoting a broad-based prosperity, critics contend they promote a kind of 21st-century colonialism that uses debt to shackle the developing world.

In the era of social media, central planners are having a much tougher time telling their story, much less sticking to their narrative.

Here in the U.S., despite multiple years of economic stimulus, via zero interest rates after the Great Recession, economic growth rates have remained at historic lows for a so-called recovery. The labor-force-participation rate, youth unemployment, wage stagnation, wealth inequality and the longest slide in productivity since the 1970s are all still problematic.

Similar efforts in Japan and Europe have been even more ineffective at restoring growth. This all is treated in the financial press, in a shorthand, as the "new normal" or our "post-growth world."

Stephen Roach, former chairman of Morgan Stanley Asia and now a senior fellow at Yale University's Jackson Institute of Global Affairs, wrote in a recent post. “What is particularly disconcerting is that central bankers remain largely in denial in the face of this painful reality check.” He added, “Having depleted their traditional arsenal long ago, central bankers remain myopically focused on devising new tools, rather than owning up to the destructive role their old tools played in sparking the crisis.”

Roach warned that while financial markets love any form of monetary accommodation, in the form of low interest rates there “can be no mistaking its dark side,” which includes the promotion of asset bubbles, punishing those who save while incentivizing “reckless risk taking.”

Indeed, Roach has cautioned that current conditions are “not dissimilar to the environment of asset-based excess that incubated the 2008-2009 global financial crisis,” asserting that “central bankers desperately want the public to believe that they know what they are doing. Nothing could be further from the truth.”

But for Richard Wolff, a visiting professor in the New School's graduate program in international affairs, the post-Great Recession central bankers' approach has only made problematic wealth inequality worse, increasing the net worth of the top 10 percent even as the rest of society has lost economic ground.

“Their conservative governments have limited themselves to the policies business and the rich always prefer: monetary expansion to get over the immediate crisis and then slow waiting or 'doing nothing much,'” Wolff wrote to Salon. “Meanwhile, the rich can wait, especially if the waiting is accompanied, as it has been since 2009, by asset price appreciation fueled by expansionary monetary policy.”

“In other words, for the top 10% the upwards redistribution of wealth and income over recent decades and continuing since 2008 compensates them for the limp and lame 'recovery' since 2008,” Wolff wrote. “For the other 90%, there is no compensation so the anger and political polarization rise. Empires of the past have blown up and ended in this way before.”

The Federal Reserve’s multiyear zero interest rates may have helped the U.S. paper over the depths of the Great Recession, but it is not without macro economic consequences: This has helped set the stage for an explosion of debt worldwide.

In much of the world, this debt went to expand manufacturing and extraction industries at a time when demand for the output it produced was in decline.

This week’s World Bank and IMF confab comes a year after the International Monetary Fund warned of $3.3 trillion worth of “overborrowing” in fragile emerging markets. For a sense of scale, that is equal to almost five U.S. bank bailouts. In 2004, the level of emerging market corporate debt, outside the banking sector, was $4 trillion. The IMF has said that by 2014 it had ballooned to $18 trillion.

While many experts say that such a debt level for the U.S. is no problem, others are less sanguine. “The so-called experts also said there was no problem with systemic risk built into the system before the 2008 mortgage bubble burst,” said Michael Santoro, professor of management at Santa Clara University. “If anything, post 2008 crisis. we should have learned about double checking our assumptions about systemic risk.”

"The Fed has become politicized and now its afraid to end the easy money policy,  but we can't just keep the peddle on the gas no matter what,” warned Santoro. “We need to make some small incremental interest rate increases because the longer we put it off it will only get worse."

“In 2016 many central banks have driven interest rates to near zero or even negative values," Frank J.Contractor, a distinguished professor of management and global business at Rutgers Business School, told Salon. "This has produced only a small discernible stimulus.”

Contractor added, “This is an unhealthy situation on two counts. First, historically low interest rates have created asset bubbles around the world in real estate, stocks, and bonds. Worse, central banks now have little or no room for further maneuver in monetary policy, should future crises arise requiring further stimulus.”

Peter Kenny, a senior market strategist for the Global  Markets Advisory Group, agreed the central banks' monetary policy approach has been overplayed and increasingly disconnected from its results.

“Monetary policy, without coordinated fiscal policy will ultimately fail,” Kenny wrote to Salon. “A classic case in point can be found in the EU at the moment. The EU is mired in stagnant growth while the ranks of the unemployed remain bloated —particularly in the demographics that should reflect the opposite" he said referring to those 24 to 40.

He added, "Fiscal stimulation, in the absence of capital market demand, is essential for the world's economic to reboot. That theme will dominate this upcoming meetings of the IMF and World Bank.”

But Kenny said turning around the world's economic trajectory is not just about markets. He argued that it can't be divorced from improving geopolitical conditions so as to end the “never-ending conflicts from Syria to Iraq and Afghanistan and elsewhere that drain enthusiasm for fiscal spending elsewhere while simultaneously triggering a collective sense of political and military futility.”

For decades now the received neo-liberal wisdom from the elite institutions of the World Bank and the IMF was that only open markets and unfettered global trade could deliver a broad-based prosperity and advance the well-being of our species on the planet.

Yet, what we have is massive misery for millions caught up in the cross fire of conflict and increasing wealth concentration, thanks to tax evasion and rampant political corruption both here and around the world.

Back in 2013 the World Bank celebrated in a press release that over the previous 30 years the number of people in the world living in extreme poverty (on less than $1.25 a day) had declined from half of the people living in the developing world in 1981, to  just 21 percent by 2010. That still left 1.2 billion people in extreme poverty.

But even as the world has seen a decline in so-called extreme poverty, a report from Oxfam International earlier this year documented that the wealth of the 62 of the planet’s richest people was now equivalent to that of the poorest half of the world’s population. “Although world leaders have increasingly talked about the need to tackle inequality,” according to Oxfam’s website, “the gap between the richest and the rest has widened dramatically in the past 12 months.”

Meanwhile, in a parallel universe, removed from a world that’s on the precipice of the bursting of a global debt bubble, we zero in on Hillary Clinton’s missing emails and Donald Trump’s missing tax returns.