Forever Angela Chase: "For young women who were just forming and just getting angry, it was the only thing out there"

Salon talks to author Soraya Roberts about the endless appeal of "My So-Called Life," the great '90s teen drama 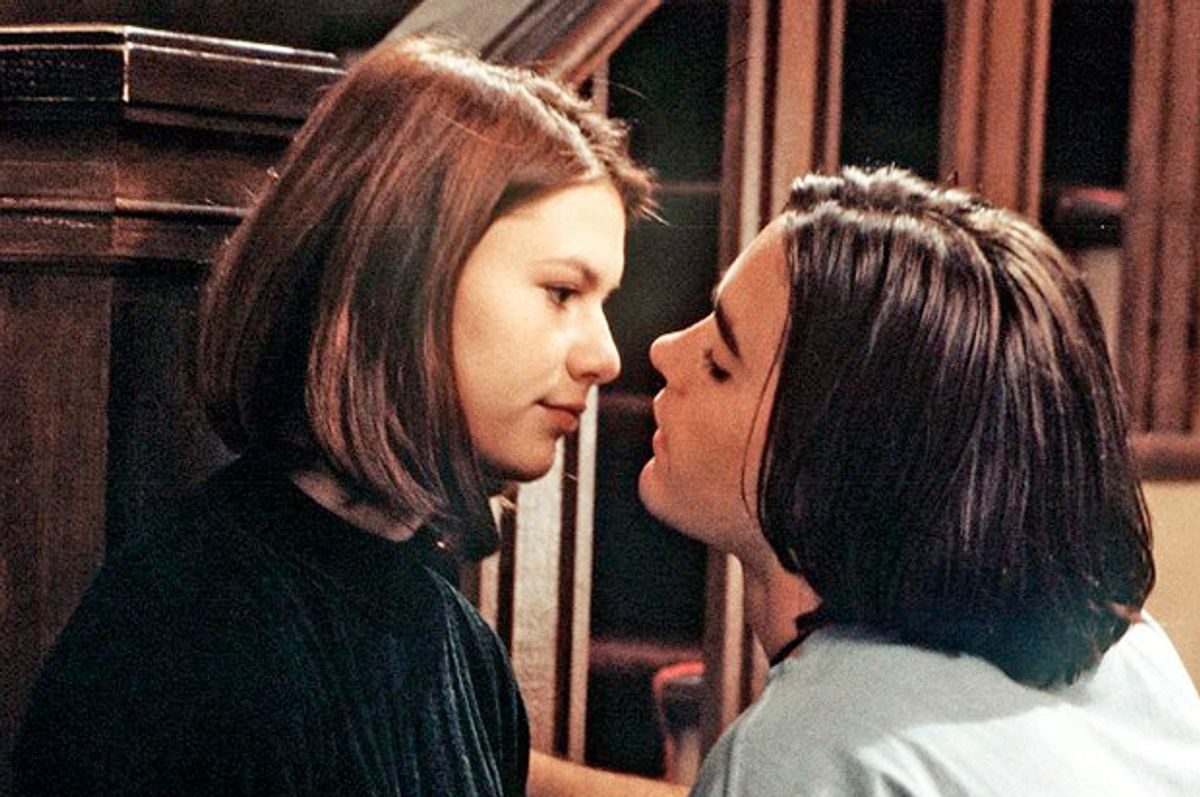 Claire Danes and Jared Leto in "My So-Called Life" (ABC)
--

Angela Chase never graduated high school. She never went on to college, to work, to grownup relationships. Unlike a trove of memorable '90s-era TV teens — from Buffy to Brandon and Brenda — the fictional suburban Pittsburgh adolescent endured just one season on the air, and in that one season became one of the most indelible television characters of all time.

Twenty-two years after "My So-Called Life" premiered, the show's place in the canon of iconic tales of teenage life only gets stronger. Each week of its original run — and then in a seemingly endless rerun loop during MTV's coveted Buzz Bin time slot — Angela and her friends tackled learning disabilities, teen drinking, gender identity, infidelity and unrequited love but did so in a way that didn't feel like "very special episode" preaching.

Instead, with a cast led by a young, mesmerizingly authentic Claire Danes, the show had a tone that managed to be awkward yet heartfelt. And while movies like "Clueless" offered the fantasy of '90s-era adolescence, "MSCL" summed up the period's ambivalence far better than Angela's wry observation, "Every so often, I'll have, like, a moment, when just being myself, in my life, right where I am, is, like, enough."

Now, author and journalist Soraya Roberts has released the perfectly titled "In My Humble Opinion: My So-Called Life" as part of the ECW Press' "Pop Classics" series. The book is a thoughtful exploration of the show's brief history and its legacy. Roberts recently talked to Salon from Toronto about the enduring appeal of the show, the "crazy intensity" of adolescence and the generation-defining power of Claire Danes.

How did you come to write a book on the show?

I knew about the ["Pop Classics"] series, and initially pitched a book about the movie "Pump Up the Volume." They had read my thing in Bitch I'd written about beauty and "My So Called Life," and they said, "Would you think about that?"

That show was hugely formative for me because I was exactly the same age as the character. We were big film and TV watchers in my house. It was the one show for a 15-year-old girl. That was it. I mean, you had "90210," but this was the first show that you felt like, "These are the people I go to school with. This the person that I am. I am having these problems."

And there's the way that Angela talks, the way that the show uses her pauses and her verbal tics. It's the opposite of all these shows like "Gilmore Girls," where everybody's super sophisticated. There's so much awkwardness in Angela's language.

Prior to her, aside from the fact that the kids were immature, there was a continuity between the language of the kids and the parents. And then suddenly you've got this show where the kids don't always say what they mean. They don't always say what they want to say. There's a lot of tripping over their words; there's acting differently with different people. I mention in the book the creators were like, Let's have this actual teenage girl because we don't want to do a Hollywood version of what a teen is like. I don't know how [show creator] Winnie Holzman was able to capture it.

Watching it now, as a mom, there's so much of it that sounds like my kids. It's amazing — the accuracy of so much of it and the drama and the intensity of it. As an adult, you forget that.

I don't know why we have this amnesia about different age groups that we go through, but we really do. My mom has told me that "Basically from when you were 14 until you were 18, we had one conversation. You were impossible." Based on all the studies they've done about hormones and the development of the brain, teens are not making this up. They're actually feeling things crazy intensely.

The other thing I also really liked about the show that I didn't really get until I went back and looked at it is that people say that as they get older they identify more with the parents. But those characters are not so different from their kids. They're also having identity questions, even though they're adults.

Adults don't always get their acts together. I just finished watching "Fleabag," and so much of it is about that and about female friendship. It's also a great classic story of the love between women, and the drama of that, where the male relationship is almost the secondary one. I think "MSCL" is more about Angela and Rayanne.

That is such a universal thing in women's lives, to have these almost familial relationships with your best friends. If you have that intense relationship, there's always going to be an explosion, I think. Because you can't maintain that. Something's gotta give.

When you have a blood relationship in a family, there's no way to negotiate out of that. You already signed the contract the day you were born. The thing with friendship is there's always — and it's horrible to say this — an out. There's no requirement to stay with that person like there is with your family. So it's funny to have that intensity and then it's like, I know I shared my life with you, but I can get out of this. Yet it's so unacceptable to people for friendships to break up.

These friendships that female teens form are so intense and almost symbiotic, where you see groups of girls who dress a little alike and they pick up each other's mannerisms.

Yeah! It's like that great line that Rayanne's mom says, that [Rayanne] just wants to be [Angela]; she wants to live in her body. That's totally what it's like.

"My So-Called Life" was only 19 episodes. It's almost nothing. Yet this still stands out 22 years later. What is about this show that people keep discovering it, they keep connecting to it, and keep taking it to heart?

Well, part of it was that MTV just played it over and over and over so it got into our brains that way. But I also think that we were that '90s generation where everybody wanted to hide in their own skin. It tapped into a very specific feeling of that time. Grunge was very much a rejecting of authority and not being happy, and that was the perfect moment for that show to come along. I also think there was nothing [on TV] that was realistic for women. For young women who were just forming and just getting angry, it was the only thing out there. It was perfectly representative of that time.

And you cannot understate Claire Danes and Winnie Holzman together. You don't get that kind of collaboration very often. Claire Danes — the way she moved her body, the way she spoke, the way she understood the character, the way it actually was part of her own life at the time — those things all together made her exceptional.

And Winnie Holzman, too. She would work with her young actors; she was very aware about the way that young people were feeling and what they wanted to talk about. She was very open to young people and being their mouthpiece.

I know at the time I took Wilson Cruz's character Rickie on one level. And now that I see how much more fluid teens are about gender and sexuality; it's such a farsighted characterization. It's a character who defies labels. Now, looking back at Rickie, I see how subtle and nuanced Cruz's performance is — and by a Latino actor when there were almost no other Latino characters [on] TV. Why do you think, given the impact the show had, it's taken so long to change the conversation about representation on television?

If you've got truckloads of white men who've traditionally been in power and who've been brought up with all the sexism and racism, why would things change while those people remain in power? They're at the top; they're making decisions. So it almost hasn't mattered if there was one Latina show runner to come along and try to change things. The reason it's taken so long is because an overhaul at the top level takes a long time.

There are also just more options now. I don't think "MSCL" would be on ABC right now. It might be a Netflix or a Hulu original.

You watch something like "MSCL," and a lot of the themes still feel so topical. The look is such a jewel of a mid-'90s moment, but your parents sucking and your friends being screwups and feeling like everything is the most important thing never goes away.

Also they're not doing too much DeGrassi-ing, which I also talk about in the book. And not having too much reference to pop culture stuff, not really placing it too much in that time period in terms of the movies the characters are going to or the TV they're watching. It's all about the way they feel, which is something that is consistent across generations about teenagers.

What do you think it is about teenagers and stories about them, teenage girls in particular, that makes them so fascinating?

It's the only time in your life where you're sophisticated enough that you're independent, but you're still sheltered enough that you can explore yourself. In the best cases — obviously I'm not talking about characters like Rickie, where he's homeless — you're taken care of. You live in your parent's house; they look out for you.

For me, I hated being a teenager. But in retrospect, all I had to do was show up for school from 8 to 3:30 and hang out with my friends after school. It's a time [when] you're free to look at the world and explore the world. [Richard Linklater's film] "Boyhood" does that really well. I always think of that scene where the kid's looking at clouds in the beginning. That's the feeling, having whole summers where you're sitting outside and talking with your friends.

It's also all about the heightened emotions and those first-time experiences, and there's no way to have that again. I don't know [if] it's so much a veneration of teenagers themselves, but maybe it's those privileges that they have; that we had, too. When you're a teenager, you don't realize. And then it's gone.