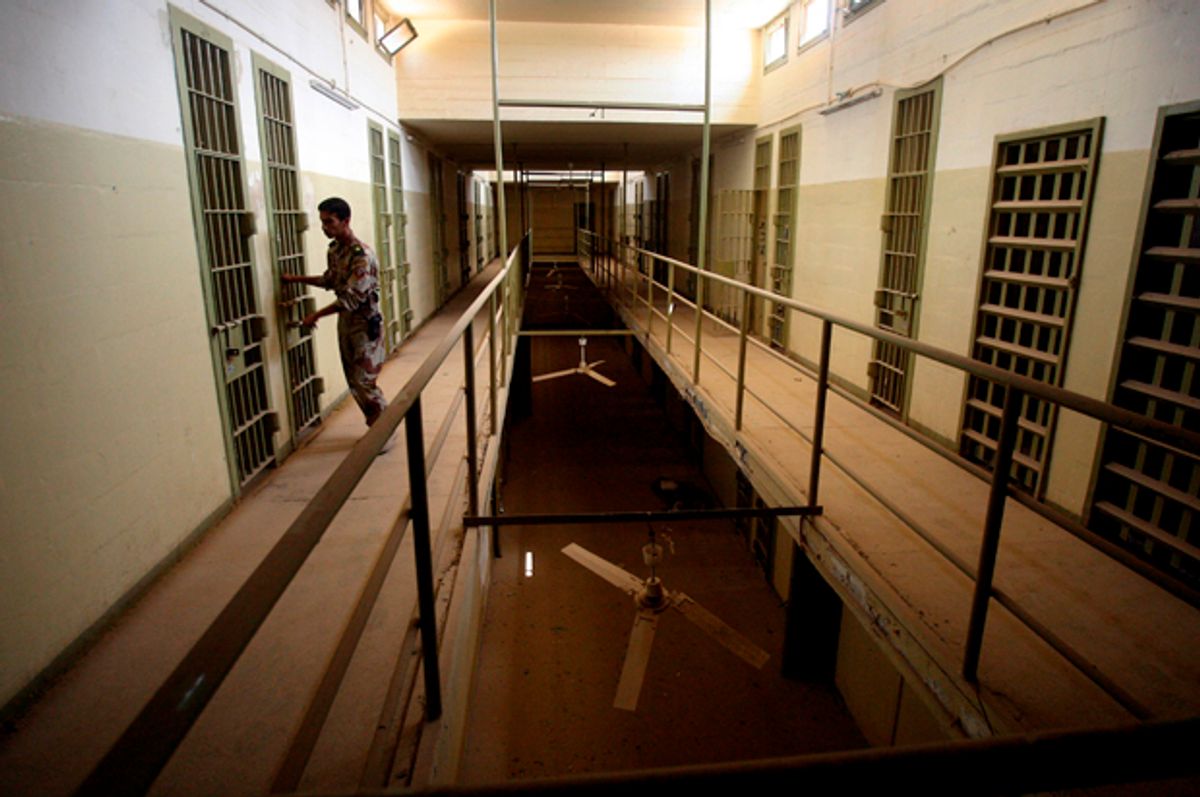 Previously undisclosed methods of torture used by the U.S. Central Intelligence Agency have been revealed in a new report by Human Rights Watch.

Two Tunisian men detained without charge or trial in a CIA black site in Afghanistan from 2002 to 2015 independently described to the rights group several excruciating forms of abuse they endured at the hands of the CIA.

The detainees, who were subjected to extreme sensory deprivation and hunger, recalled being brutally beaten all over their bodies with batons by U.S. interrogators. They also said they were repeatedly punched and kicked. One man suffered broken bones in these beatings.

Even more grueling were the many weeks the detainees endured chained by their hands to the ceilings of their cells for repeated 24-hour periods. These days of torment were only punctuated by short breaks for interrogations or other forms of torture. One man said he was forced to hang like this for roughly three months; another said he suffered through it for a month.

They also said they survived various forms of water torture, including waterboarding, having their head repeatedly forced into containers of water and being forced into barrels and tubs of water. While hanging from the ceiling, they were also sometimes sprayed with water for long periods.

The two detainees were even threatened with a makeshift electric chair. One man was physically placed in the electric chair, but it was not used. Another was told he would be forced into a coffin.

Laura Pitter, senior U.S. national security counsel at Human Rights Watch, independently interviewed Ridha al-Najjar, 51, and Lotfi al-Arabi al-Gherissi, 52, in August 2016 in separate locations in Tunisia. They were repatriated to their home country by the U.S. in June 2015, after 13 years in custody.

“These terrifying accounts of previously unreported CIA torture methods show how little the public still knows about the U.S. torture program,” Pitter said in the report.

Human Rights Watch produced a video about the torture, featuring an interview with al-Gherissi.

Neither of the men "was provided compensation or support for their wrongful detention or the torture they endured, nor to help them cope with the physical and mental harm incurred," Human Rights Watch noted.

Now, al-Gherissi cannot see or walk well. "I lost my future. I didn't do anything," he said.

"Today they are destitute, unable to work, and experiencing the consequences of serious physical and emotional trauma they believe is a direct result of their treatment in U.S. custody," the rights group added.

Al-Najjar and al-Gherissi were held in a CIA black site in Afghanistan known as "Cobalt," which detainees have referred to as the “Dark Prison.” They were later transferred to U.S. military custody at the Bagram air base in Afghanistan.

These men are the first detainees to report on the forms of torture used at Cobalt before the death of Afghan detainee Gul Rahman in November 2002. Human Rights Watch says their "first-hand accounts shed light on CIA mistreatment during the earliest days of the CIA program."

The detainees also recalled being subjected to other hellish forms of torture and abuse that have previously been documented.

Cobalt was known as Dark Prison because detainees were kept in pitch-black darkness, subjected to intense sensory deprivation. The only time they saw light was when bright lights were shone on them in interrogation, or when they were asked for information about photographs.

Al-Gherissi said he never spoke with other any other detainees. The only reason he knew others were there was because he heard their screams.

At Cobalt, interrogators put a gun to al-Najjar's head and threatened to kill him. The beatings continued as well. “I had skin hanging off me and bruises and cuts all over me,” al-Najjar said. Al-Gherissi still has large scars due to the treatment.

Both were stripped naked and endured cold temperatures and water. Neither was ever given access to a bathroom. Interrogators sometimes fastened a diaper to them, which was only changed every four days or so.

Al-Najjar recalled being subjected to starvation. He was fed only once every roughly three days, and was given food he called “inedible” and “disgusting,” which had pebbles, hair, dirt or even a cigarette butt in it.

The water he was given “smelled and tasted disgusting,” al-Najjar said, and could only be drunk "if you were on the verge of death and completely dehydrated." Even then, he was not given enough water, and his tongue and mouth became “completely cracked.”

When he entered Cobalt, al-Najjar weighed more than 260 pounds. When he left, he weighed just over 150 pounds. Human Rights Watch noted that this account is consistent with those from other prisoners held at the Dark Prison, who also faced food deprivation.

Both detainees said doctors helped facilitate the torment by reviewing injuries, providing pills and giving injections after particularly bad beatings, before eventually giving a “green light” for new torture sessions. The men said they would frequently lose consciousness, and sometimes woke up to doctors treating them.

Al-Gherissi said a doctor told his interrogators, “If he stays for another week, he will die.” The torture then stopped, but he was placed in total isolation in another room for two months.

When the CIA moved him, al-Najjar also said guards pushed something into his anus, resulting in a pain from which he still suffers. Human Rights Watch noted that many other former CIA detainees reported having objects rectally inserted during transportation.

When they were transferred to Bagram, the torment was less intense, but it still continued. Al-Gherissi said dogs were also used to intimidate him.

Al-Najjar was detained by U.S. and Pakistani forces in May 2002. Al-Gherissi was detained in September of that same year.

The CIA accused al-Najjar of being a bodyguard for Osama bin Laden, and al-Gherissi said interrogators accused him of having been a member of al-Qaida. Both repeatedly denied having anything to do with extremist movements. Human Rights Watch noted, "The U.S. has not publicly provided information supporting these allegations."

In December 2014, the Senate Intelligence Committee released a 499-page summary of a classified 6,700-page report on the CIA’s detention and interrogation program. (The full report still remains classified, and may be destroyed.)

The Senate Intelligence Committee found that at least 119 people were held in secret CIA detention, in what Human Rights Watch calls a conservative estimate.

The Senate summary documents the CIA’s planned interrogation methods for al-Najjar at Cobalt. Human Rights Watch, however, said the Senate summary "contains an inadequate description of the two men’s treatment while in CIA custody."

A September 2002 CIA cable described al-Najjar as a “clearly broken man” who was "on the verge of a complete breakdown" — although the torture continued.

Human Rights Watch reached out to the CIA for a comment. The agency said it "reviewed its records and found nothing to support these new claims."

"Despite ample evidence of criminal activity, the U.S. has yet to conduct a credible criminal investigation into CIA torture, or to prosecute those responsible. Nor has the U.S. offered any form of redress to the many individuals the CIA tortured or otherwise ill-treated," the rights group said in its report, stressing that this is still the case even after President Barack Obama issued a 2009 executive order formally ending the CIA’s detention and interrogation program.

Human Rights Watch called on the U.S. to compensate the detainees for their suffering, noting it is obligated to do so under international human rights law.

She added, “This administration has rejected the use of torture, but future administrations will carry the stain of torture until those responsible are prosecuted and the victims compensated. So long as they are confident they won’t be prosecuted, U.S. officials may again resort to torture.”