Listen to the children: What Jeremy Mardis and Zianna Oliphant tell us about race and police brutality 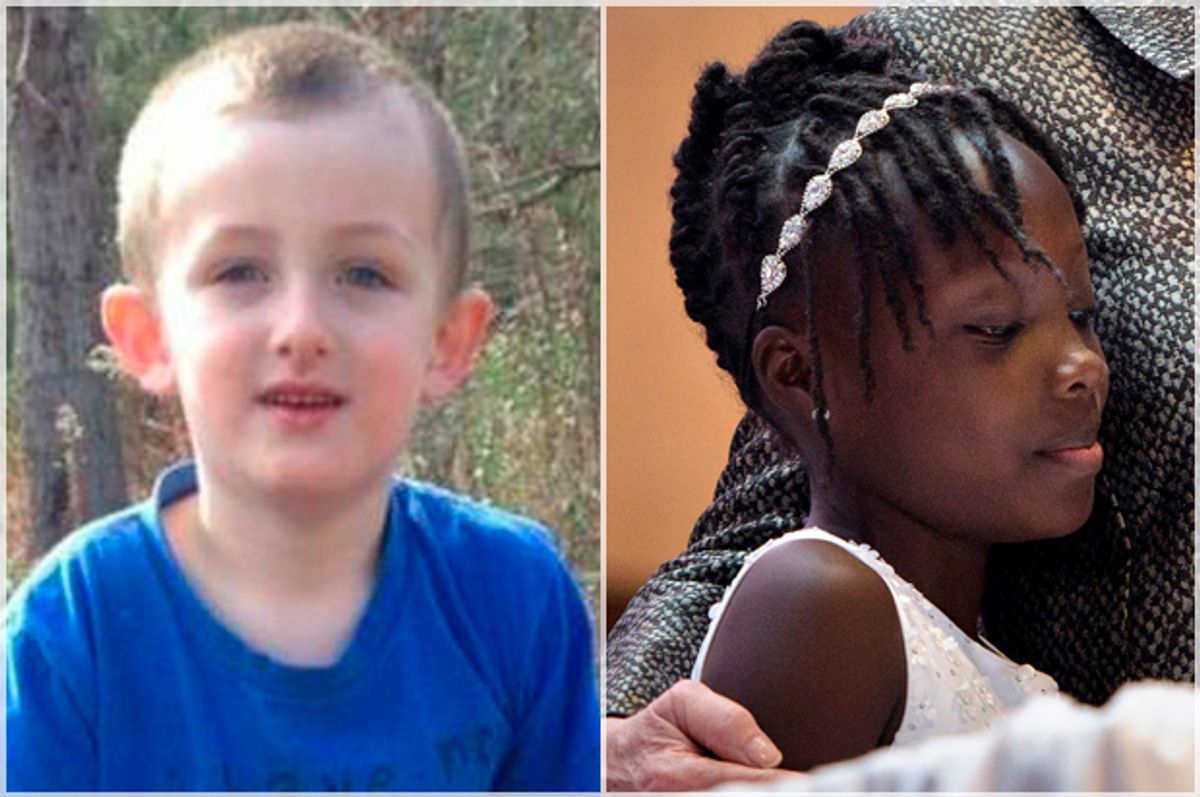 What follows is a story that many Americans may not have heard about.

In September 2015, two Marksville, Louisiana, marshals pursued a vehicle after they witnessed an argument between a woman and a man outside of a bar. The vehicle was driven by a man named Christopher Few. The car eventually stopped at the end of a dead-end road.

The two officers exited their vehicle. They then shot at the car more than a dozens times. Christopher Few suffered nonlethal wounds. An officer then approached the van. He opened the door and saw a 6-year-child named Jeremy Mardis in the backseat. Mardis was shot five times in the chest and head. The boy, whose father is Christopher Few, was pronounced dead at the scene.

There are additional complicating factors: It is rumored that Greenhouse and Few were involved in a dispute over a woman. Last week as part of an evidentiary hearing, the body camera video of this horrific series of events was made public. A senior official with the Louisiana State Police described the video footage as “the most disturbing thing I’ve seen.”

I have been reading about this tragedy on right-wing “news” websites and elsewhere for more than a year. That experience has left me with the following questions and observations:

Where are the mass protests? As compared with incidents of police violence against black and brown people, in this case Stafford and Greenhouse were quickly charged with murder. The justice system failed Jeremy Mardis but it's trying to remedy that mistake by punishing the two officers who killed him. This is an example of why, as reported by recent research from The Pew Research Center, a majority of white Americans have extremely high levels of trust in the police and also believe that when police act inappropriately that they are punished.

Where is the 24/7 cable news media? “It if bleeds it leads” and “controversy creates cash.” Protests and public upset in the context of a larger national narrative or crisis makes for compelling television, which in turn drives advertising revenue. A story about two cops who are arrested for killing a 6-year-old child — even if the police are black and the child is white — is apparently not “sensational” enough. This is as much an indictment of a profit-driven corporate news media as it is a country that is almost wholly numb to police violence and thuggery.

Where is the “Blue Lives Matter” crowd? When a (white) police officer kills a black person, regardless of how questionable and problematic the circumstances may be, the officer is almost always defended and excuses made for his or her behavior. This is the knee-jerk reaction of racial authoritarians.

It would seem that “Blue Lives Matter” is not applied equally across the color line when it is black cops who violate the rights of white children (or adults). Ultimately, the defense of “I was in fear of my life” does not hold as much weight when cops who are not white kill the citizens they are supposed to protect and serve.

Where are the demands to “wait for the whole story” and to “not rush to judgment?” Again, black cops who kill white people under highly suspicious circumstances are apparently not granted such immunity and protections.

Where are the racist comments about Jeremy Mardis? When black children are killed by the police, white supremacists and other right-wing ilk that constitute America’s “basket of deplorables” often demean the victims’ memory and lives, mocking the death of another black or brown child in America. Jeremy Mardis, a white child killed by the police, has thankfully not been subjected to such wickedness. Empathy and sympathy are not felt mutually across the color line.

What follows is a second story that many Americans may not have heard about.

Zianna later told CBC News that black people in Charlotte are protesting because, “All we want is just to have our equal rights and we want to be treated the same way as other people.”

She also told NBC News that she knew the “grown-ups” would not say that. . . .

Zianna said she was born and raised in Charlotte. But until recently, she said, “I’ve never felt this way.”

“I can’t stand how we’re treated,” Zianna told the city council, as tears streamed down her cheeks.

“We need our fathers and mothers to be by our side.”

It is almost unimaginable that a white American child would ever have to make such a plea.

Zianna’s bravery is but another example of how black children are robbed of their innocence by institutional and interpersonal racism in the United States. Researchers have shown that black children are judged by whites to be older than they actually are. Black children are punished more harshly by teachers and schools than their white peers are for the same behavior. The new Jim Crow that is America’s criminal justice system also punishes black youth more severely than it does white youth.

The words of Zianna are also a reminder of how race and citizenship have historically been intertwined in the United States. To be “white” is to be a “real American.” To be black or brown is to be the Other — someone whose citizenship and belonging are contingent and always in doubt on a fundamental level.

This extends to black children as they are all too often forced into a state of adultification (be it participating in the civil rights protests of the 1960s, Black Lives Matter today or speaking to the council like Zianna Oliphant in Charlotte) as they speak back to power in an effort to show how full democratic inclusion, citizenship and rights should apply equally to all Americans.

In all, black children are made to ponder existential questions about democracy, safety and security; white kids are allowed to focus their concerns on the distractions and fun that come with childhood innocence.

Jeremy Mardis and Zianna Oliphant, are in different ways, reminders of how America does not value its children. As compared with other advanced industrial countries, children in the United States have access to worse health care and schools. America has one of the highest infant-mortality rates among industrialized countries. America’s infant and child poverty rate is also one of the worst in the developed world. America’s children are also victims of gun violence to a degree that is almost unknown in most countries around the world.

Race and class still matter here as well. Black and brown children experience comparatively worse outcomes on measures of child welfare than white children do. This applies to treatment by the police and the state.

White children (and adults) whose rights have been violated by America’s police are much more likely to see their transgressors punished. By comparison, black children (and adults) who are brutalized by America’s police must fight an uphill battle for justice in a society in which equal treatment and dignity under the law are most certainly not colorblind.