Taking on "the real power players": How workers are taking pension control back from hedge funds

How states, and employees, are saving themselves billions of dollars by avoiding hedge funds 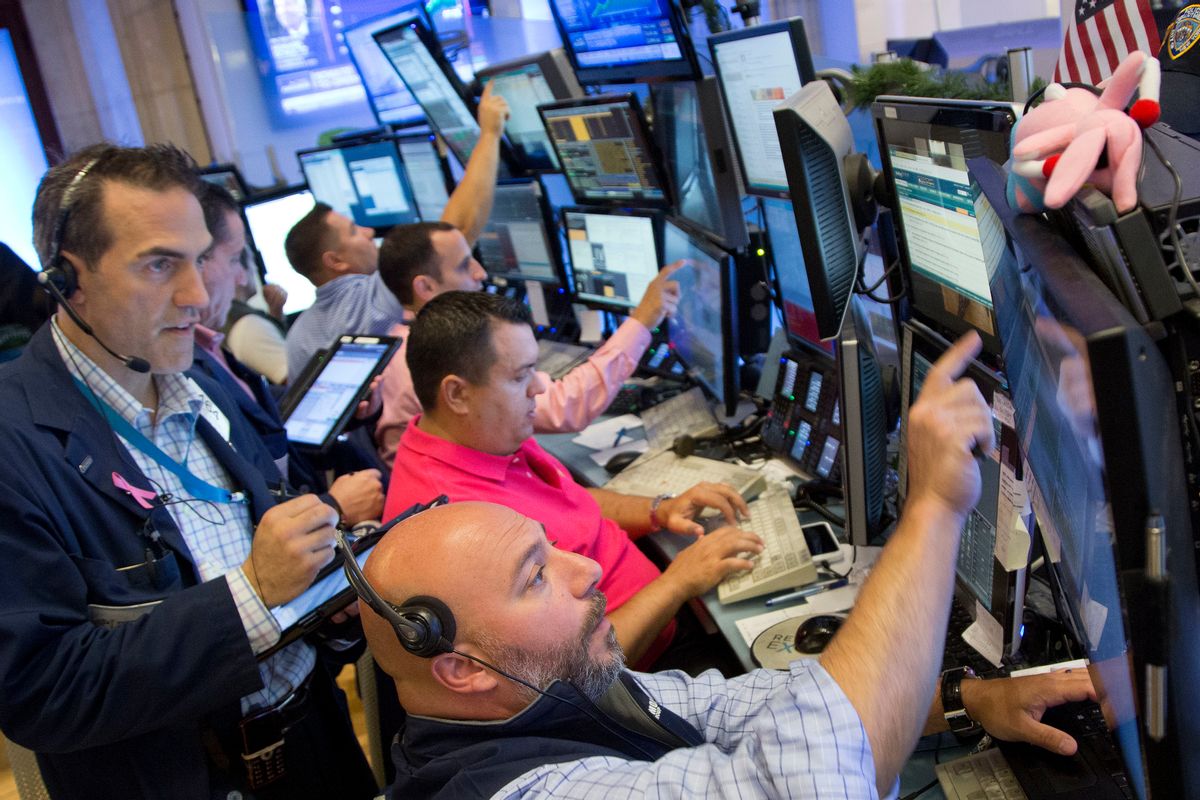 The number of complex investment tools has exploded over the last several decades. Hedge funds, which have skyrocketed since the 1990s, are one such tool. They’re called hedge funds — in the sense of hedging your bets — because, unlike more traditional investment options, they can bet against the market and, in theory, make profits even if stock prices are dropping across the board.

This promise of a safeguard against the whims of the market is especially attractive to large, institutional investors, like public pension funds and university endowments — groups that want a steady rate of return. Not only has this promise proved false during bad times, but hedge funds have proved a mediocre investment during good times too. Poor returns combined with exorbitant fees have cost universities and public employees billions of dollars.

The total value of public employee pension funds in the United States is $4.7 trillion. That’s money that supposedly belongs to workers, but labor often has little-to-no say in how employee pensions are invested. In fact, most of this money is funding the same corporations and financial institutions that have been aggressively attacking the interests of working people for decades.

A growing movement to take pension money out of hedge funds, then, isn’t just about high fees and bad returns. It’s part of a larger effort to wrest control of the economy away from the financiers who’ve created a system that works only for the super-rich.

In a recent example, union representatives of New Jersey state employees on the New Jersey State Investment Council (NJSIC) successfully pushed through an initiative last month to cut the state employees’ pension fund’s investments in hedge funds in half, a reduction of $4.5 billion.

Prior to the vote, a report done by Hedge Clippers, an anti-hedge fund organization launched in 2015 by the American Federation of Teachers (AFT), found that hedge funds have cost New Jersey public employees $2.7 billion since 2007, including $1.1 billion in below-average returns. The other $1.6 billion was profit collected by the hedge funds in fees.

Numbers like these are common when it comes to public pension investments in hedge funds. It’s no wonder, then, that union representatives for public employees are pushing to get their pensions taken out of these underperforming, expensive funds, even if that just means putting the money back into other, more traditional investments.

New Jersey is a landmark victory for hedge fund critics in the labor movement. Not only is it the biggest divestment so far, but the win is particularly impressive given that the state previously had one of the highest proportions of state pension fund investments in hedge funds in the country—12.5 percent.

According to Adam Liebtag, the representative of the AFL-CIO on the NJSIC, the council’s decision is the result of escalation and tough negotiation by labor unions.

“This vote is a win for the beneficiaries and a win for organized labor,” he says.

He says getting the votes took a lot of work, since labor union representatives are permanently outnumbered on the NJSIC by gubernatorial appointees. But pressure from below to divest has grown as harsh cuts imposed on public employee pension benefits have left workers increasingly unwilling to tolerate the high fees and low returns of hedge fund investments.

“The whole pension system in New Jersey is extremely frustrating,” Liebtag says. “We, as members, have made every contribution we’re supposed to. We’ve never missed a payment, even as we’ve been asked to contribute more and a higher proportion of the total every year. We should have a larger say in how our pensions are invested.”

“They should be held accountable”

The efforts of unions and activists have put divestment on the national agenda. Increasingly, both universities and public retirement funds are deciding to take their business elsewhere.

The California Public Employees’ Retirement System (CalPERS) pulled $4 billion in 2014; the New York City Employees’ Retirement System (NYCERS), largely at the urging of the AFT, divested $1.5 billion in April. The Illinois State Board of Investment, the University of California, and the University of Maryland have also all initiated reductions in their investments in hedge funds in just the past few months, and Pennsylvania’s auditor general has called for an audit of all state hedge fund investments.

In June, a vote to consider reducing allocations to hedge funds for the Ohio Public Employee Retirement System (OPERS) failed. OPERS is the largest institutional investor in hedge funds in North America, and the fifth largest in the world.

Though not all of these divestments were the direct result of anti-hedge fund activism—CalPERS, for example, refused to comment on the political dimensions of its decision—activists can take credit for exposing the unnecessary complexity, lackluster returns and exorbitant fees characteristic of the industry.

Hedge Clippers has played an especially important role in shedding light on some of the dirtier truths of the hedge fund industry’s practices. Since 2015, it has released dozens of reports—which they call the “Hedgepapers”—documenting the industry’s high costs and poor results, and providing detailed studies to bolster the case for local efforts to divest. The OPERS vote, for example, came after Elizabeth Parisian of Hedge Clippers presented its methodology for calculating fees to trustees in March, which she says helped spark a serious discussion about hedge fund fees and performance.

Hedge Clippers’ work is crucial, as clear information about what hedge funds do and cost is hard to come by. It’s easy enough to learn that these funds typically use what’s called a “two and twenty” fee structure, which means the fund takes 2 percent of the total amount invested up front in fees, and an additional 20 percent of any returns. But since the fees are different each year, hedge funds have long been able to keep the particulars of their profits secret.

At the University of California, AFSCME Local 3299 has partnered with Hedge Clippers in an ongoing push for full disclosure of fees paid to hedge funds and possibly divestment for both employees’ pensions and the endowment. The Local’s spokesman Todd Stenhouse says, “There’s no real transparency around fees. We had to dig through industry standard formulas to find out what (the UC system) is paying.” When Hedge Clippers did some digging, though, Stenhouse says, “We discovered we’d been paying $1 billion in fees for returns worse than a standard mutual fund.”

Similarly, one OPERS trustee—Steve Toth—who voted against maintaining the current level of hedge fund allocations asked the board, “‘What kind of bang for our buck are we getting?

“An example of this is reflected in our hedge fund returns last year (2015) when we lost over $84 million and paid more than $133 million in fees...and this year we have not done much better,” he said.

These numbers aren’t unusual. On average, “Fifty-eight cents on the dollar (of returns) is profit for the hedge funds,” says Randi Weingarten, president of the AFT and a leading advocate for holding hedge funds accountable.

“So many of these hedge funders talk about how teachers should be accountable in their classrooms, despite not having adequate resources. Well then they should be held accountable for their performance too. I’m not sure you should only look at numbers, but even based on their own standards we should be divesting,” says Weingarten.

Michael Kink is executive director of Strong Economy for All, a coalition of labor and grassroots organizations that worked with Hedge Clippers to win divestment in New York. “Just saying ‘You’re losing a lot of money’ isn’t enough,” he says. “The fiduciary duty is crucial, but when there’s powerful political figures and institutional elites who want the institution ripped off so that they can get rich, you have to make those people controversial and expose the awful things they’re doing, both in politics and in their personal lives.”

In New Jersey, for example, between 2012 and 2014, the State Investment Council allocated over a $1 billion to hedge funds whose top management donated large sums of money to either the Republican National Committee or the Republican Governor’s Association, both of which have helped fund Chris Christie’s gubernatorial campaigns. Their collective contributions totaled $7.6 million. New Jersey’s hedge fund investments have doubled since Christie took office in 2010.

Kink thinks that taking on hedge funds is the future of the progressive and labor movements as a whole.

“Our focus on hedge fund billionaires and private equity reflects their outsized influence on the economy,” he says. “They’re the real power players, the guys behind the guys. In all different sectors of the economy, they’re the poster children for everything Americans hate: lousy jobs, lousy pay, and inequality.”

Strong Economy for All and Hedge Clippers have pushed a variety of measures to curb the power of hedge funds through a creative direct action campaign. In March 2015, they marched on billionaire Paul Tudor Jones’ waterfront mansion in the Hamptons. That same month they picketed Dan Loeb’s $45 million “mansion in the sky” in New York City, and went back to the Hamptons to disrupt a fundraiser for Gov. Andrew Cuomo at Loeb’s residence there. Recently, they succeeded in getting a bill introduced to the New York State Legislature that would close the so-called “carried interest loophole.” This is what allows a large portion of the income of multi-billionaires to be taxed at the “capital gains” rate of just 20 percent. That’s less than the rate of a family making $75,000 a year.

Unions are also looking beyond divestment to seek alternative investments that better serve their members, both as stakeholders in their pension funds and as workers. The AFT recently committed $16 billion in bonds to invest in the expansion of LaGuardia airport, a project which it expects to create 100,000 jobs.

“We’re standing on the shoulders of the people who’ve been doing this work for decades, Kink says, “pushing for investments in clean energy, affordable housing, community commons, things our communities need that pension funds could provide. They’re starting to look at other options, and our hope is that those options are going to be a whole lot better for working people. There’s almost no way they could be worse.”