Mike Pence is the embodiment of conservatism, and made it known Tuesday he wants to be the next Republican nominee 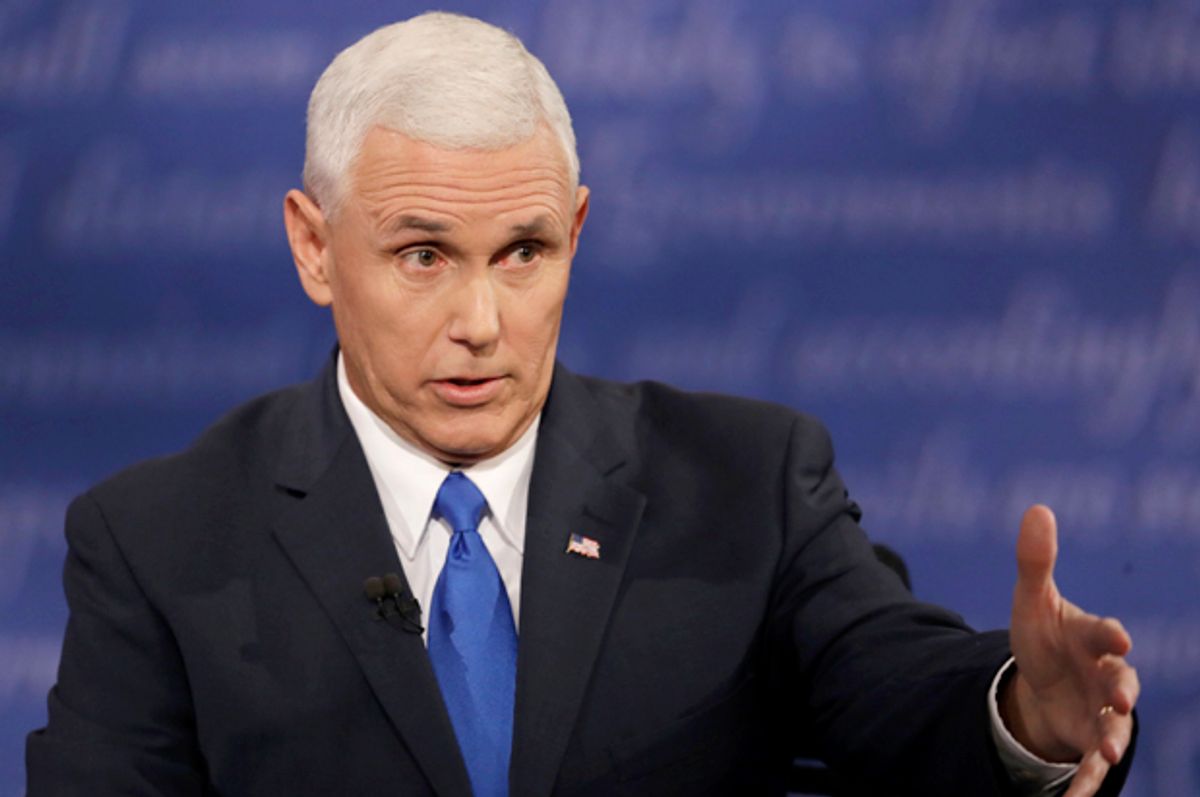 Tuesday night's vice-presidential debate was a reminder of what this election would have been like had we been in the time when only white, male career politicians ran for president. You know, the good old days when America was great — before we decided to nominate "demographically symbolic" candidates and celebrity con artists. Surprisingly, it was fairly interesting.

I must confess that I have not been a close follower of Sen. Tim Kaine's career. He's a Virginia politician, operating a few miles outside the Beltway, so he's always had the eye of the political press. But for some reason I've never taken the same interest in him as have others who write about politics. It's no secret that I had hoped Clinton would take a big risk and name the lefty firebrand Elizabeth Warren as her running mate, but Kaine seems like a smart, congenial fellow and I've been impressed with his performance on the campaign trail. I was also pleased to see that he's been more progressive than is generally acknowledged. My assumption going into last night's debate was that he would be knowledgeable and competent, and pin down Mike Pence on his running mate's many flaws.

By contrast, I've followed Pence's career for years and he's got plenty of flaws of his own. Indeed, much as he seems like a milquetoast next to Donald Trump, he's just as "out there" in his own way. The fact that GOP leaders like Paul Ryan think of him as a mainstream figure says everything about how the Republican Party ended up with Trump at the top of the ticket.

As a leader of the Republican Party's religious right and a congressman who was anything but camera-shy, Pence was seen as a comer since he first got to Washington in 2000. He was one of those ultra-conservative politicians who came out of the right-wing talk radio world and had a fluency in conservative patois that made him very effective in the era of Fox News. His patented furrowed brow gives him a permanently pained expression that makes it seems as if he takes his hardcore far-right philosophy more in sorrow than in anger. He's basically Ted Cruz without the Harvard degree.

Both Kaine and Pence are deeply religious, and while Kaine was identified as a "pro-life Catholic" in the past, he has always supported a woman's right to choose. Pence was raised Catholic and is now an evangelical Christian with such extreme views that as governor of Indiana he signed the most restrictive anti-abortion law in the country, banning abortion even in the case of severe fetal disability and requiring that fetal tissue be buried or cremated. (A federal judge blocked the law from taking effect in the wake of the Supreme Court's ruling in Whole Woman's Health v. Hellerstedt.) He crusaded to shut down Planned Parenthood and succeeded in closing dozens of clinics in Indiana.

RELATED: What you need to know about Purvi Patel, the woman arrested under Mike Pence's abortion law

Pence's stand on LGBT rights was so extreme that he actually went too far, which is really saying something since Indiana is one of the most conservative states in the union. It's home to the 20th-century revival of the Ku Klux Klan (which may explain his reluctance to say whether he believes former Imperial Wizard David Duke is aptly described as "deplorable.") He has always been extremely hostile to gay rights, going back to his first run for Congress when he advocated for "gay conversion therapy" in lieu of funding for HIV/AIDS, which he characterized as being spent by organizations that "celebrate and encourage the types of behaviors that facilitate the spreading of the HIV virus.”

More recently, he supported a bill allowing discrimination against the LGBT community on the basis of "religious liberty," one of Pence's personal hobby-horses and the main social-conservative legal strategy of the moment. Under tremendous pressure from people all over the country and his own constituents, he retreated.

From his denial of climate change to his belief in creationism, Pence is the most hard-right radical to ever appear on a national ticket. Just this week a federal court had to block his atrocious bill barring Syrian refugees from his state because his reasoning that Syrians scare him is discriminatory. If he were still in Congress, he'd be running the obstructionist Freedom Caucus with the likes of Ohio's Jim Jordan and Iowa's Steve King.

Mike Pence is the living embodiment of the modern conservative movement in all its glory, and last night he took the opportunity to place himself at the head of the pack for the 2020 presidential race. And he did it at the expense of the man at the top of the ticket. He might as well have been running with the ghost of Ronald Reagan for as often as he quoted him. He certainly didn't waste any of his time quoting Donald Trump.

On the other side, Tim Kaine threw himself into the clearly uncomfortable role of attack dog for the benefit of Hillary Clinton by interrupting and bringing up Trump's odious comments and positions over and over again, particularly on the issues of Trump's insults. And he hit him repeatedly on Vladimir Putin, Trump's deportation plan and the missing tax returns. For inexplicable reasons, Pence repeatedly denied that Trump had said what he clearly has said and he even denied what he himself has clearly said. Even weirder, Pence also claimed that Clinton and Kaine are running an "insult-driven campaign" which would make all but the most die-hard supporters laugh out loud.

Hillary Clinton herself may have had the best response to that during the debate:

Yes, Trump and Pence are running an insult-driven campaign.

Fact-checkers are still toiling to sort it all out. But you can't really blame Pence. Trump is indefensible and parroting "I know you are but what am I" may be the only thing you can do in that situation.

The early reviews had Pence winning the debate on style with Kaine getting in the hits he needed to provide fodder for his own campaign over the next few days.

He was, of course, actually baiting Trump, not Pence. According to the New York Times' John Harwood, Trump was not amused that Pence advanced his own agenda and didn't defend Trump:

Trump adviser on debate after Pence passed up opportunities to defend him: "Pence won overall, but lost with Trump"

And this may be the bigger problem:

Can Pence's running mate find the discipline to keep his ego in check over the next few days? I wouldn't bet on it.