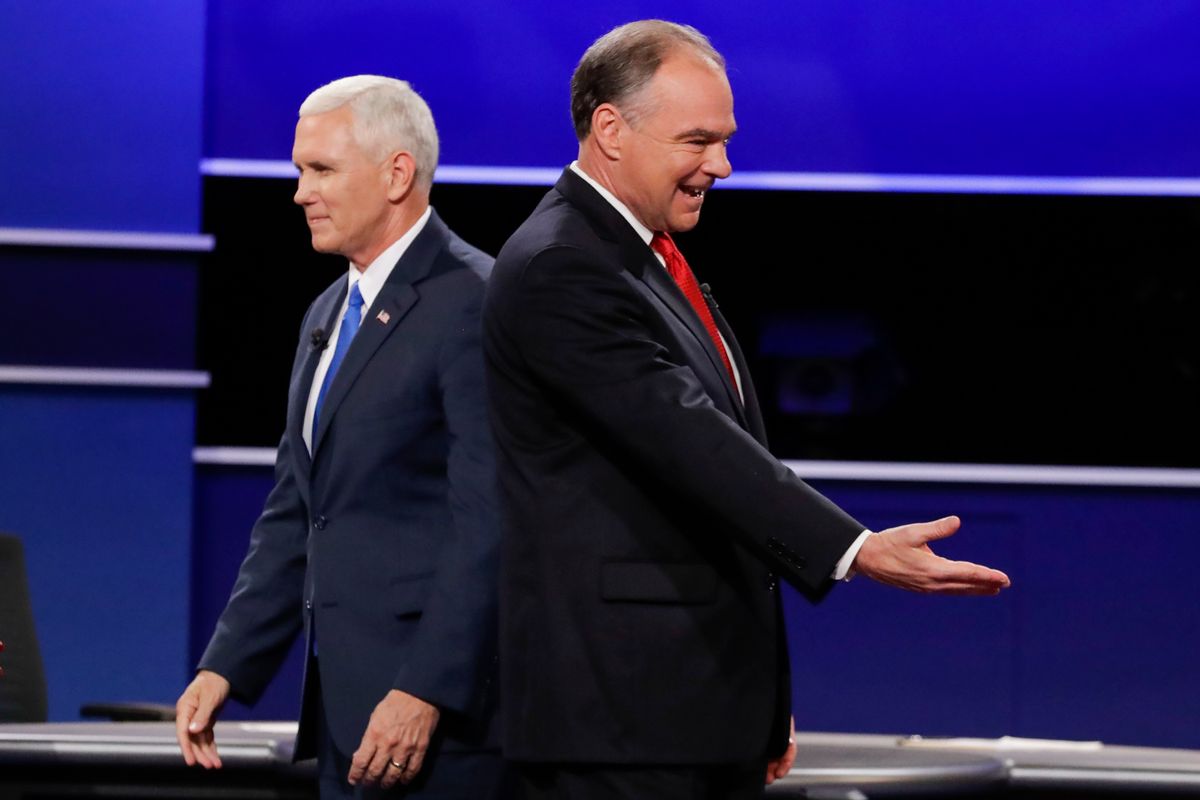 Toward the end of the otherwise boring debate between Republican Gov. Mike Pence of Indiana and Democratic Sen. Tim Kaine of Virginia, as Kaine was speaking about things that Donald Trump has said during his candidacy, Pence interrupted him, saying out loud, "Senator, you whipped out that Mexican thing again."

"Honey, where'd you put #ThatMexicanThing ?"
"It's on the shelf, next to the #BindersFullOfWomen."

Look at me, I'm #ThatMexicanThing that has served in the military and graduated college. #NeverTrumpPence

#ThatMexicanThing where immigrants harvest all our food, a job white Americans considers beneath them. #VPDebate — Juan, P.E. (@jrivera64) Oct. 5, 2016

#ThatMexicanThing was my neighbor who works 100 hrs a week to send his kids to a decent private school. #VPDebate

#ThatMexicanThing is my abuelita who moved to San Antonio without speaking English & slept in a barn while picking lettuce every summer. — Matthew Duarte (@matthew_duarte) Oct. 5, 2016

Before the comment, the debate between Mike Pence and Tim Kaine was destined to be dull.

And make no mistake about it, the internet noticed. Let’s go to the Twitter roundup.

Everyone knew this was going to hurt.

How do you prepare for a boring debate? By making cheeky jokes, such as these.

Early on, it seemed that Pence delivered one of the most inaccurate opening statements in history, referring to the host venue, Longwood University, as "Norwood University." Fact-check? Absolutely false! Should this be held against him? Probably not, but these kinds of faux pas are catnip to the comically inclined.

Pence may or may not have “won,” but Kaine definitely lost.

More than any other single theme, Twitter’s discussion of this debate brought up one thing over and over again: Kaine’s constant interruptions were awful, and as a result he came across as shrill and insecure when contrasted with his poised counterpart. The “Donald Kaine” tweet stings the most, considering that part of the reason Democratic presidential nominee Clinton was determined to have won the presidential debate last week was that she interrupted far less often than her Republican rival, Donald Trump. It’s shocking that Kaine didn’t make a mental note of this while preparing earlier in the week.

Elaine Quijano, the debate moderator, was the real winner.

Twitter was effusive with praise for moderator Elaine Quijano, who at times sternly took command of the two wayward participants. Her growing frustration was evident as the night continued, but she was rightly praised for maintaining a firm grip on the proceedings even when Kaine and Pence couldn’t stop talking over each other.

There was a whole lotta mansplaining going on.

Perhaps the most uncomfortable part of watching Tuesday's debate was the brazen disrespect of Quijano, particularly from Kaine. While both candidates talked over her words as if she wasn't there, Kaine brought thing to a low point when he patronizingly violated the rules by chiding her, “This is important, Elaine.” The image of two wealthy white men ignoring and being condescending to a Hispanic female moderator was nothing short of disgraceful. She deserved better, and so did we.

Vladimir Putin was the big star of the night — in absentia!

Without question, the high point for Kaine was his tense exchange with Pence over Vladimir Putin, the Russian president who has a distressingly cozy relationship with the Trump campaign. Folks on Twitter noticed the prevalence of Putin’s name, of course, and were quick to call out Pence when he lied about praising Putin’s leadership. Kaine was shrewd in not letting this go. While that definitely didn’t redeem his temperamental performance, at least he guaranteed that Trump’s connection to a foreign totalitarian regime will remain in the news cycle.

Both candidates clung to former president Ronald Reagan’s name as if it were a security blanket.

Why did the 40th president of the United States start trending on Twitter during the debate? Because both Kaine and Pence tried to use Reagan’s name as a staff with which to beat their rival, that’s why. Presumably politicians do this to impress voters by a reference to a popular past president, but when the references feel shoehorned in instead of natural, liberals and conservatives can unite behind the transparent phoniness of it all.

One final tweet: This tweet best captures the spirit of the whole evening. It was prompted by Kaine's and Pence's talking about the importance of their Christian beliefs.

It’s cathartic to joke about travesties like this debate, but let’s not kid ourselves about what happened tonight. The Republican and Democratic presidential nominees are the most unpopular in recorded history. And even though Kaine and Pence were unlikely to change that in one night, they could have at least set a better example.

By failing to do even that, they not only guaranteed that this debate will be as unimportant as the vast majority of other vice presidential debates. Worse yet, they also deprived the American public of something it desperately needs right now: the ability to believe in its politicians again.