Tim Kaine didn't win Mr. Congeniality — but he got the job done in VP debate

Kaine was grating at times, but he kept the focus on key issues and goaded Pence into "that Mexican thing" 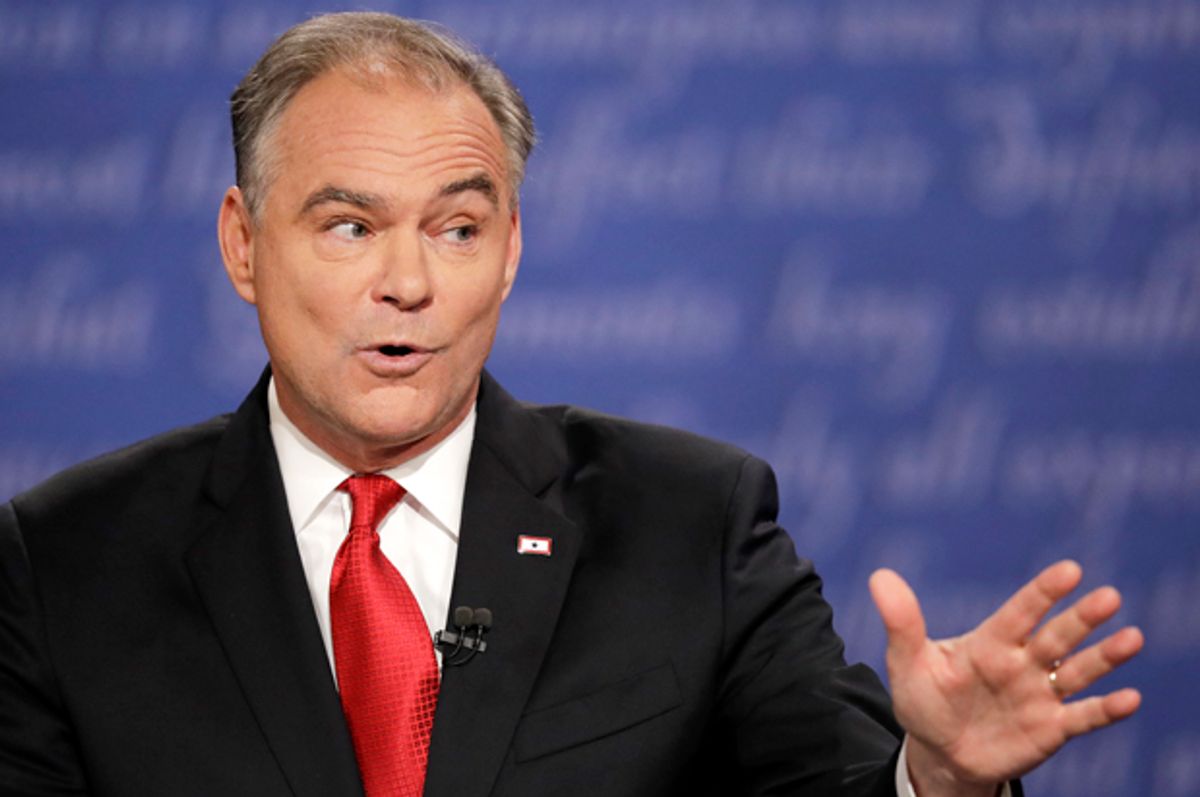 No doubt many pundits in the media world will declare Republican Gov. Mike Pence of Indiana the winner of Tuesday night's vice presidential debate against Democratic Sen. Tim Kaine of Virginia. Kaine was admittedly overexcited and his constant interrupting of Pence in the first 20 minutes rubbed everyone, on the left and right, the wrong way. Meanwhile, Pence exuded the preternatural calm of a sociopath, increasingly frustrating Kaine with his ability to endlessly lie — about easily checked facts — with a disturbingly practiced assurance.

But while Kaine didn't win any points on likability, he had a job to do and he got it done: pushing out the anti-Trump talking points and highlighting the vast differences between Hillary Clinton campaign's vision for racial justice versus the Trump campaign's overt racism and bigotry.

On that front, Kaine got the job done. He repeatedly dragged the conversation back to issues about racial justice, from policing to immigration, which worked to put Pence on the defensive while appealing to black and Latino voters (and anyone, really, who cares about racial justice). While Pence was the living embodiment of an unflappable liar — definitely the guy to go to if you need someone to bury the bodies — Kaine's relentlessness on this front clearly got to him enough that, for a brief, shining moment, he got flustered and angry.

“You whipped out that Mexican thing again," Pence whined. It was one of the few memorable lines of the night and the likeliest to grab headlines. No doubt Latino viewers watching the debate took notice.

Kaine was irritating, but Pence was downright creepy. Many of the lies he told don't need fact-checking to be read as such: Denying Trump's bigotry, denying his and Trump's praise of Vladimir Putin, pretending that it's Clinton and not Trump who is running an "insult-driven campaign" as he put it. People who look you in the eye and lie so boldly without breaking a sweat are creepy, and I'm sure voters noticed that.

It doesn't help that Pence has a disturbing affect, which is made all the worse by his tendency to crack deeply unfunny jokes and then act really pleased with himself like he's charming and not creepy. He even tried to roll out Ronald Reagan's "there you go again" line and didn't seem to notice that he couldn't sell it at all. He is clearly a man who has spent his life mistaking people's polite laughter for genuine merriment, and that inability to read other people comes across as, well, creepy.

Let's just say that few people who watched that debate are going to welcome further interactions with the governor of Indiana.

Kaine scored some good points towards the second half of the debate. After Pence rolled out some dishonest talking points about the Clinton Foundation, Kaine countered this perfectly by highlighting the foundation's good work and contrasting it with the sleazy goings-on surrounding Trump's foundation and business organizations, even managing to inject Trump's boy crush on Putin into the proceedings.

Later when the topic of abortion came up, Pence became passionate for the first time, which led him awfully close to suggesting that women should be forced to give birth so that strangers who want their babies can have them. Again, that reads more as creepy than as "pro-life." But Kaine went in for the kill shot, asserting that his pro-choice views were rooted in his belief in religious freedom and demanding to know why Pence doesn't trust women. Pence could only answer with empty pablum.

Vice presidential debates don't really move the needle of public opinion. The only thing campaigns can hope to get out of them is firing up their base of voters and lodging some good attacks on the opposition's nominee. On both those counts, Kaine hit his mark. Voters who care about criminal justice or immigration reform or even reproductive rights will walk away feeling good about the Clinton-Kaine ticket. Voters who worry about Trump's shady business dealings or his coziness with Putin were reminded of those concerns, repeatedly. Kaine didn't leave Pence as a quivering mass of failure in the same way that Clinton devastated Trump last week, but he did what he set out to do.

Now that that ordeal is over, we can get back to far more important things, including whether Clinton can wipe the floor with Trump yet again, and finish him off for good, in Sunday's town hall debate.