Moms, it's time we stopped enabling the bumbling dads

For today's working couples, the division of home labor is unfair. Women should stop buying into it 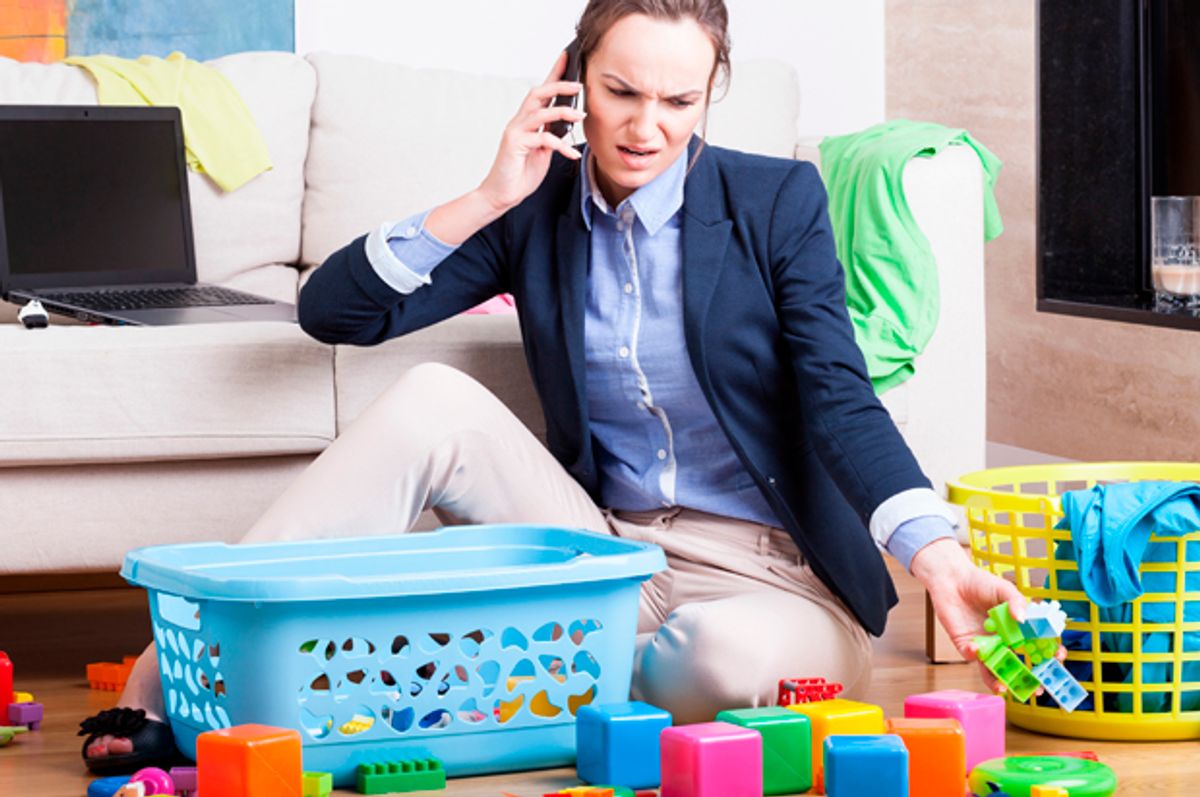 Throughout my daughters' childhoods, a certain kind of  joke/complaint has been a constant among some of my fellow heterosexual mothers. It's the classic one about the inept, clueless dad. It's the meme on a Facebook wall about how if you want something done right the first time, ask Mom. It's the LOL anecdote how Dad went out shopping and came home with all the wrong stuff. And in darker, tougher moments, it's quiet admissions of feeling overwhelmed, exhausted and unhelped. And for years I've wanted to tell these women: I think you're getting played. How are we, my allegedly feminist sisters, supposed to be smashing the patriarchy if we're the ones standing in the way of our husbands changing diapers?

In my own nearly 17 years of parenting — and some of that was single parenting — I've learned that roles and responsibilities do not neatly shake out into two equal piles. That even in the best, most aspirationally equitable of relationships, how we respond to real-life demands is often profoundly informed by our deeply ingrained cultural expectations.

Unlike me, my spouse has never gone out alone with friends and had someone ask who's "babysitting" the children. My mate's domestic and paternal work is consistently greeted with enthusiasm by others — the clearing of a dinner party meal I've cooked has been known to elicit sighs of "I wish I could get my man to do that." And when he was recently spotted in our building's laundry room with a load of wash, a neighbor offered him this encouragement: "It does my heart good when I see you in here."

I have never, in my entire life, been thus praised for doing laundry.

Yet for all the imperfections of our day-to-day life, I still live with a grown-ass man whom I trust with a load of laundry and a vacuum cleaner and the making of school lunches. I was not born with an additional secret knowledge of how to do those things, nor I did inherit the title of family dishwasher. It's supposed to be a partnership; we're supposed to figure it out together. And when we once had a knockdown fight about chores and he informed me, "I'm not like you; I don't come home from work and want to clean," I blew his mind by replying, "At the end of the day I don't want to clean either, but that's the only way things get clean." You know what's sexy, by the way? Competence.

I don't know what I was expecting when, earlier this summer, I posted to my Facebook wall Rufi Thorpe's polarizing essay in Vela on being a "Mother, Writer, Monster, Maid." In it, Thorpe, an author and a mother of two young children, wrote with ferocious candor of her love for her husband and her rage at "this state of servitude" that marriage and children have put her in. She admitted it is possible she is clinically depressed.

Thorpe lamented her "invisibility" as her working husband "consistently leaves his underwear tucked behind the bathroom door. . . . His wet towel on the bed." And she admitted that "God knows, even if we could afford a nanny or daycare, the idea of someone else taking care of the baby makes me uneasy." She added, "You cannot pay someone to care about your kids the way you do. You cannot pay someone to be you."

Well, no, you can't. But you can pay someone to have a different kind of relationship with your children for a few hours so you can do other things.

To me it was a profoundly unsettling piece, this story of a woman feeling like her family "will use me up like a tube of toothpaste and never even notice." But among several of my friends and people I follow on Twitter, it was applauded for its resonance. I wanted to yell at her husband to pick up his own goddamn wet towels. But more than that, I wanted to beg Thorpe to stop picking them up for him. Visualize leaving a wet towel, just where it is. In what other ways might it get picked up?

Last year, The Washington Post's Brigid Schulte also wrote candidly of her family dynamic and how after their child was born, "Instead of being the egalitarian couple for the new millennium, as we intended to be, we had unintentionally slid into pretty traditional gender roles. Except that I still worked full-time." She cited a study from the Journal of Marriage and Family that found that despite a vast majority of couples proclaiming their desire for an egalitarian relationship, once kids came along, the men "started doing less housework. Five fewer hours a week! The women were putting in 37 hours of housework and child care each week. The men 24 hours. And both the men and women continued to work the same number of full-time hours."

A study by Cornell just this week found that "Mothers were more stressed and fatigued and less happy while parenting than were fathers," likely because "Moms spend more time with their kids while doing more onerous chores like basic childcare, cooking and cleaning, whereas dads spend more time with children in enjoyable, low-stress activities like play and leisure. Mothers also do more solo parenting, experience more sleep disruptions and have less leisure time, which are all associated with lower levels of well-being."

This is not, I believe, some conspiracy from the Man-O-Sphere to keep us exhausted and angry. It is instead just the subtle, constant pressure on women to be the best, to have it all, to lean in — and in every possible direction at once. While the longstanding cultural assumption — aka the devil's greatest trick — that men are too adorably helpless to perform basic household chores is increasingly being challenged, we women likewise have to acknowledge that often it's we who are holding ourselves back in our own homes.

Our fear of being less-than-perfect moms is so deep that our white-knuckled grip on the reins of control — combined with partners who may be all too willing to hand it over if it means not picking up a trail of dirty socks — not only wrings us out, but it sends the message to our sons and daughters that an abnormal division of labor is normal.

What if we resolved to do less, and what if our kids learned that Dad's way of doing things was OK, too? And if we look at our lives and feel like we're tubes of toothpaste being squeezed, we need to make sure that we're not the ones doing the squeezing.