Okkervil River gets born again: "I feel more alive than I have for a decade"

Salon speaks to Will Sheff, leader of the indie-rock band, about his creative death and rebirth with "Away" 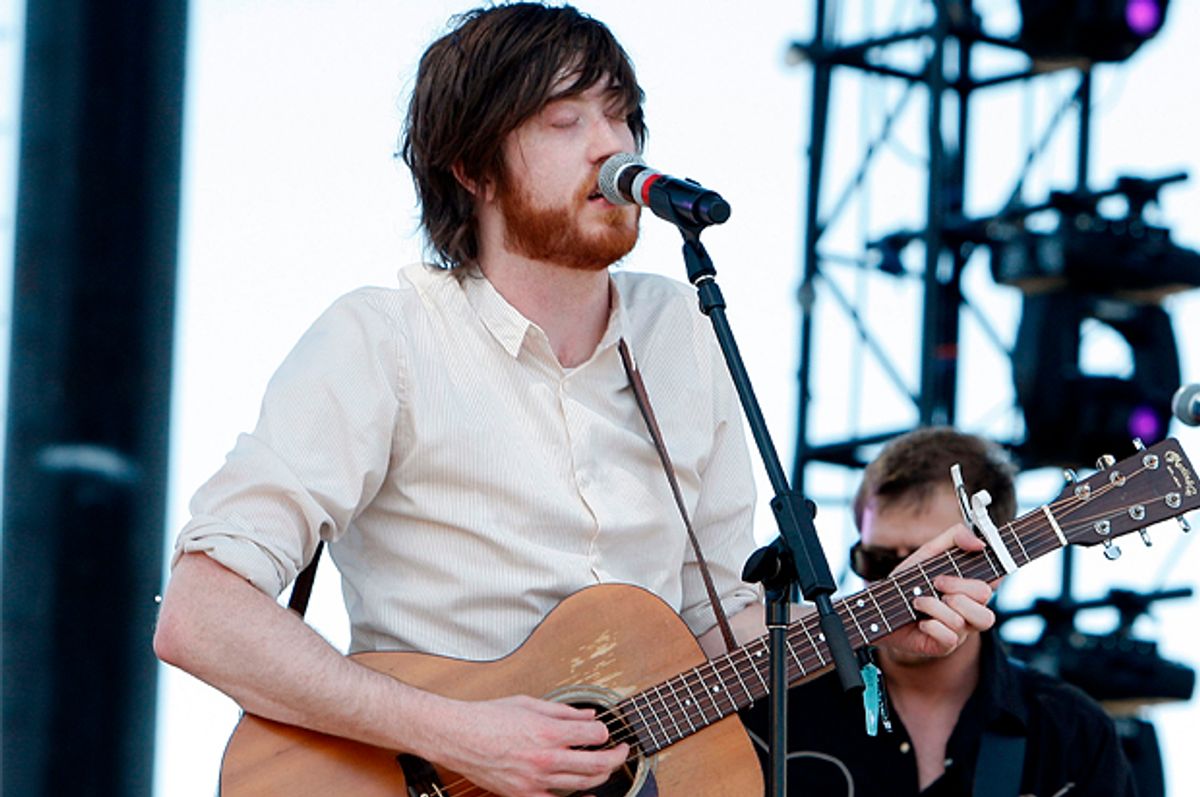 For more than a decade now, Okkervil River has been making some of the most reliably smart, resonant and folky music in the indie-rock universe. But band leader and singer Will Sheff recently tore up the old band, which had been based in Austin, Texas, for more than a decade, and put together a new one that's now located in Brooklyn. It came near the end of a few very tough years that included the death of his grandfather, who once founded a school in New Hampshire, played trumpet and was a very important influence on Sheff.

The new album, “Away,” has been compared with the recordings of Van Morrison and Nick Drake and opens with a song, “Okkervil River R.I.P.,” with explicit themes of death and rebirth. It’s a mournful album that's not quite gloomy.

Okkervil is also premiering a new video for the song “Judey on a Street,” directed by Gabrielle Demeestere, who made the movie “Yosemite” with James Franco.

The interview with Sheff, which took place a few hours before the band’s recent show in Los Angeles, has been lightly edited for clarity.

Let’s talk about the record “Away” for a minute. To my listens so far, it sounds like quite a departure: It’s more intimate, low-key and acoustic than most of what we’ve heard from you before. Does it strike you as a major break with the Okkervil River past as well?

Oh yeah, absolutely. That difference was part of the earliest point, of it being a seed. It wasn’t intended to be an Okkervil River record. I didn’t even necessarily have plans for it to be a finished record out in the world. I often do projects that are just for me, with no plans to put it out. It’s like when you leave out a little meal for your ancestors, in the corner of the room; it’s like that. It’s like a sacrifice to show you why you do what you do. So I thought this would be something like that.

As I listened back to the recordings, I felt it was something powerful leading us in a different direction. I have different musicians; I have a different business team, a different cover artist. Everything in it seems completely different. But in this other way, it harkens back to what I started doing when I was 21 years old and had just moved to Austin, Texas, and was making my first foray into having a band.

It sounds like it’s been a very rough few years for you. Can you give us a brief sense of what you’ve been through?

In a way it’s a weird thing. I don’t want to necessarily put my own personality and my own personal life up for sale. When I’ve been talking to interviewers about it, they’ve asked me about being very broken up about my grandfather’s death. That wasn’t necessarily the impression I intended to convey. This was a man who was tremendously influential to who I am as a person. And when I started to realize my time with him was drawing to an end, I realize how lucky I was to be around him in hospice, in the last month and week of his life. It was a sad time, but he was also old and had lived this epic life. So it was almost a valedictory time as well.

Around the time I was writing “Away,” he had just passed away. But I was becoming increasingly disillusioned with the music business and had fallen into patterns of behavior I needed to walk away from. I was feeling poisoned by New York City. I was confronting what aging means. A lot of things were happening simultaneously. If I were to get into it and unpack it in excessive detail for you, it would be no longer mine. Instead of learning a lesson from it, I would be selling it to you.

One of the things that’s come out of this complex period is having an almost entirely new band. Are there any original members at all?

There’s the drummer, who had quit — our old drummer. So even when I was working with him on this record, I didn’t think I was working on an Okkervil River record. And I didn’t even call the old guys, or girl, from the band to let them know we wouldn't be working together.

I tried to find players who came more out of jazz or avant-garde, out of folk music, trying to break out of rock ’n’ roll.

Is it hard to start again, in mid-career, with a whole new group — people you don’t have deep musical roots with?

There’s adjustment, but I wouldn’t call it difficult. There’s that Dylan quote I’ve always loved: “He who isn’t busy being born is busy dying.” I think that the last five, six years of my life I wasn’t sufficiently being born. So by definition, there’s a part of me that was dying. “Away” is the process of that person dying — a funeral mass for that person.

And the good thing about death is that it’s so linked to life; it’s the thing that needs to happen or there isn’t life. So I feel more alive than I have for a decade.

It’s not hard at all; it’s interesting. There’s a whole new group of people and a certain rebuilding of infrastructure that has to happen. As far as hard, it may be harder on the audience. They might want me to get up there and honor their memories of hearing “Black Sheep Boy” in college. But I want to be an artist — not necessarily a fan-service bot.

There are images of death and rebirth on the record, and you appear in a coffin in the video for the opening song, “Okkervil River R.I.P.” Did you have models for making this kind of album?

I had sonic models — there’s a Bert Jansch record called “L.A. Turnaround.” And there are people who’ve inspired me like Bill Fay. Another sonic model was soul music from the early '70s, when there was a lot of electric piano and percussion. I was trying to make my version of soul music — my own version of the comforting, warm, reaching-out-to-you music, in my own kind of context.

So thematically things like Lennon’s “Plastic Ono Band,” Dylan’s “New Morning” or “John Wesley Harding” — you were not super conscious of that tradition while making this.

I’m the king of doing self-conscious things; that might be what became so boring to me at this point. I love all those records, but it was a more organic process of looking into my soul and asking what I want to do and what do I not want to do. And in the process I came back to some music I’d grown up on, like the Incredible String Band. I got back into things that had intertwined with my soul back then.

But I wasn’t trying to play into a narrative — there’s a cynicism to that that would have been toxic to the whole enterprise. I was trying to find what is the most simple and beautiful thing . . . what am I feeling inside myself and how do I translate it into words?

How does this work out live, where songs often work best when they are loud and up-tempo?

I’m very much less interested in rocking out than I used to be. But I’m very interested in groove and dance and tempo. It’s less about the aggressive white male energy of rocking out and more about a hypnotic energy that might be meditative.

And we’ve been completely re-engineering the songs, putting them in new keys and time signatures.

Your first album came out in 2000, around the beginning of the file-sharing era. Does the age of streaming and the decline of CD sales frustrate you?

I don’t ever want to feel entitled. Traveling musicians have always had to sing for their supper. This is a devotional career; it’s a calling. So that’s fine. The thing that bothers me about streaming is that it takes the sacredness away. I know there are people for whom Spotify is the window into happiness and healing. That’s wonderful. But I feel that by and large, the ritual aspect, the ceremonial aspect, the artwork surrounding it, the magic tends to get taken away. That is what I really object to.

I didn’t get into this for the money; I got into it for the magic of the career. It’s the closest thing to being a magician that there is. It is a sacred calling. So I take offense when I see it being corrupted.

Tell us a little about the video for "Judey on a Street."

Gabrielle, the director, did a really wonderful job. This video has a lot of her own involvement. We talked a lot but not about the technical elements of it. We talked about spiritual ideas and our deep feelings about things, and she came up with this simple parable. It was cool to work with somebody and hand so much of the reins over to her. I think it’s really beautiful and fits the music really well.