Sympathy for Sarah Pfefferman, please: "It's always hard to hear when people don't like you or think you're a selfish jerk" 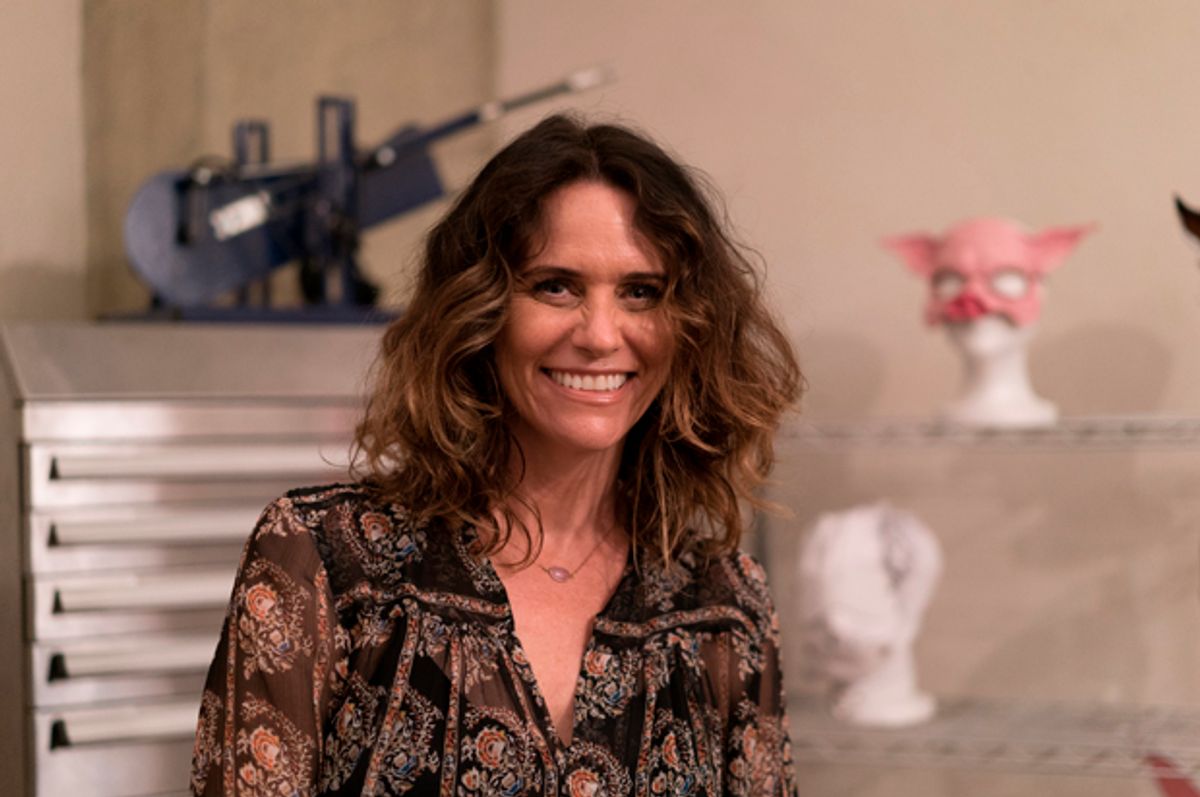 Out of all the Pfeffermans, the family at the center of Amazon’s hit series “Transparent,” Sarah may be the most inconstant — and that’s saying something. At the beginning of the series, Sarah was going through the motions in her heterosexual marriage while carrying on an affair with her college girlfriend. From there she bounced from a divorce to another quickie marriage that was over minutes after “I do,” to isolation, depression and, as the third season begins, a transactional S&M partnership and a delicate co-parenting setup with her ex-husband.

Amy Landecker, the actress who plays Sarah, is used to hearing her character described as “a hot mess.” While she owns that, the designation irks her a bit, too. But in truth, Landecker has an interesting relationship with the character she plays, the daughter of a transgender parent.

“Her anger's coming out, which I think is part of the process of grieving loss, too,” Landecker said. “It's not just her marriage and her not knowing exactly how to have an intimate relationship but obviously [relates] to her parent transitioning, just dealing with all of the feelings that can come up around that." She adds, "I'm the luckiest actor on the planet, to get to play all the different shades of her.”

Salon spoke with Landecker recently about her character’s evolution from the beginning of “Transparent” through the current third season and how Sarah’s development led her to discover a few things about herself.

In season 2 Sarah endured a hard psychological descent, and it happened within one episode. All of a sudden, she was just wrecked. How you feel about your character's progression, both from the second season to the third and then through this season?

Season 2 was really cathartic for me in a way. I felt like season 1, Sarah caused a lot of damage but didn't acknowledge any of it. When you do some of the things she does — and I've done some of those in my life — where you're just behaving from a lost, selfish place, you hurt people. I think there's a manic energy to that in the beginning, where you're just like high off of change, and you're not really aware that when you change in a certain way, sometimes it hurts people. I felt like season 2 was her feeling the consequences of that.

Then I was really happy that [season] 3 feels like her at least trying to have a spiritual connection. Her anger's coming out, which I think is part of the process of grieving loss, too. It's not just her marriage and the family and her not knowing exactly how to have an intimate relationship, but obviously [relates] to her parent transitioning, just dealing with all of the feelings that can come up around that.

It's funny that you bring up her grief because in the first season of “Transparent” a lot of people wrote about how selfish all the Pfeffermans are. Last season focused upon identity and how so much of this particular family is connected to the past in ways that maybe they don't even realize or acknowledge. What would you say is season 3’s theme, from Sarah’s point of view? It seems like she's hit some new ground and is finding herself a little bit more.

She has a certain, like all siblings, a complicated love-hate . . . not hate, I don't want to use that word. . . . She loves her siblings, but I think she feels they love each other more than they love her. Sometimes she triangulates and she's intentionally messing with them a little by going to [Rabbi] Raquel. It's like, "Fine, Josh. You get Ali. I'm taking Raquel. You guys are going to be the perfect little pair. I'm taking Raquel." Then unfortunately Raquel falls prey to what I would say are Sarah's Trump-like instincts — which is to think she's being a leader, but really she's just filling up her own narcissism.

I hate to even give Trump any sympathy by comparing Sarah to him, but I feel like she gets so full of herself that she loses the plot a little bit. I do feel like that's where her selfishness exists here, which is that she's seeking a spiritual connection and as many people do in religious and spiritual searches . . . it's like that false sense of “I know what God wants,” which of course immediately gets you in a dangerous position, if you're leading with ego and not heart.

I've got to say, I really feel sorry for Raquel in terms of what the Pfeffermans put her through.

I know. We like to torture that poor woman. She's the best character. I took one of those personality tests: “Which Pfefferman Are You?” We were at a party, as a joke, and everyone was taking it. I was like, “Please be Raquel. Please be Raquel.” She's just, to me, such an amazing person. And of course I was Sarah! I had this deep disappointment because as much as I love her I was like, “Oh, I want to be Raquel.”

So you were disappointed for the test to reveal that you’re the most like the character that you actually play.

I don't know why. I think the cliché I always hear about Sarah from people is she's a hot mess. That's the quote I get whenever I'm walking down the street and someone loves Sarah. "She's a mess!" Of course it makes me think I'm a mess, because I play Sarah. I'm sort of messy.

I don't want to get too on my feminist soap box, but there's a certain misogyny to it, too, even self-loathing misogyny that these complicated characters that any man would play, that any man would be in a narrative, we'd all be totally attracted to and probably want to have sex with. Like Don Draper. But when it's a woman, it's sort of uncomfortable. Even for myself. Even for myself to express her sexuality, to express her conflict of identity. To express her desire to live fully and find out what she wants to do. There's a certain quality to that that, I think, women aren't used to. It's not people pleasing, it's not co-dependent. It's very self-directed. Maybe I should cheer that I'm Sarah, that I buy that.

It's interesting that you brought up grief earlier. When I thought about this season, in terms of the Pfefferman kids and also with Maura, the odd thing for Sarah is this seems like each character is going through the classic five stages of grief.

I don't know if I'm going in the correct order, but I'm certainly touching on all of them because I feel like season 3 is anger.

I think she has moments of real anger just at the situation of her life and the limitations of her life and the confusion that she feels. I had two scenes where I was very concerned about unleashing that part of myself and whether people would respond to it. Would they feel I was scary and not like me? I actually have found them to be the ones, when people have seen them, they're responding to in a really deep way of connecting and understanding. It's been fascinating to me.

People are not used to seeing rage in a personal context, not in a violent, machine-gun context, in a truly emotional, familial context. We've all had that but families really keep those hidden.

Knowing where the season goes, what are you hoping people will take away from season 3 in terms of what happens with each of the characters and also with Sarah?

I guess one, I hope people feel a certain lightness that comes in season 3, in certain parts — especially the season finale. I feel like there's a certain relief, which I think everyone needs after they've gone through a hard time. I think this season has some nice moments of release and connection. I want for people to feel some sympathy and empathy, selfishly I do. I want them to understand Sarah. It's always hard to hear when people don't like you or think you're a selfish jerk. To me, she's a fully formed human being. I want people to have empathy for her.

In a broader context, there are some themes of intersectionality that were introduced this year. I think in terms of the political, social side of this, I would like people to start really thinking about banding together in terms of all forms of other-izing and discrimination, that we need to all support each other. There are some themes that are introduced especially in the first episode that, I think, are important to talk about.

It's kind of a new discussion on the landscape, that Patricia Arquette sort of beautifully introduced [in her Emmy acceptance speech] but was pushed back on. What she was trying to say in her acceptance speech is really important to all of us, which is that you have band together really to make change. It's not helpful to argue and fight within ourselves.