...the Nov. 8 contest is still all about Donald Trump and Hillary Clinton 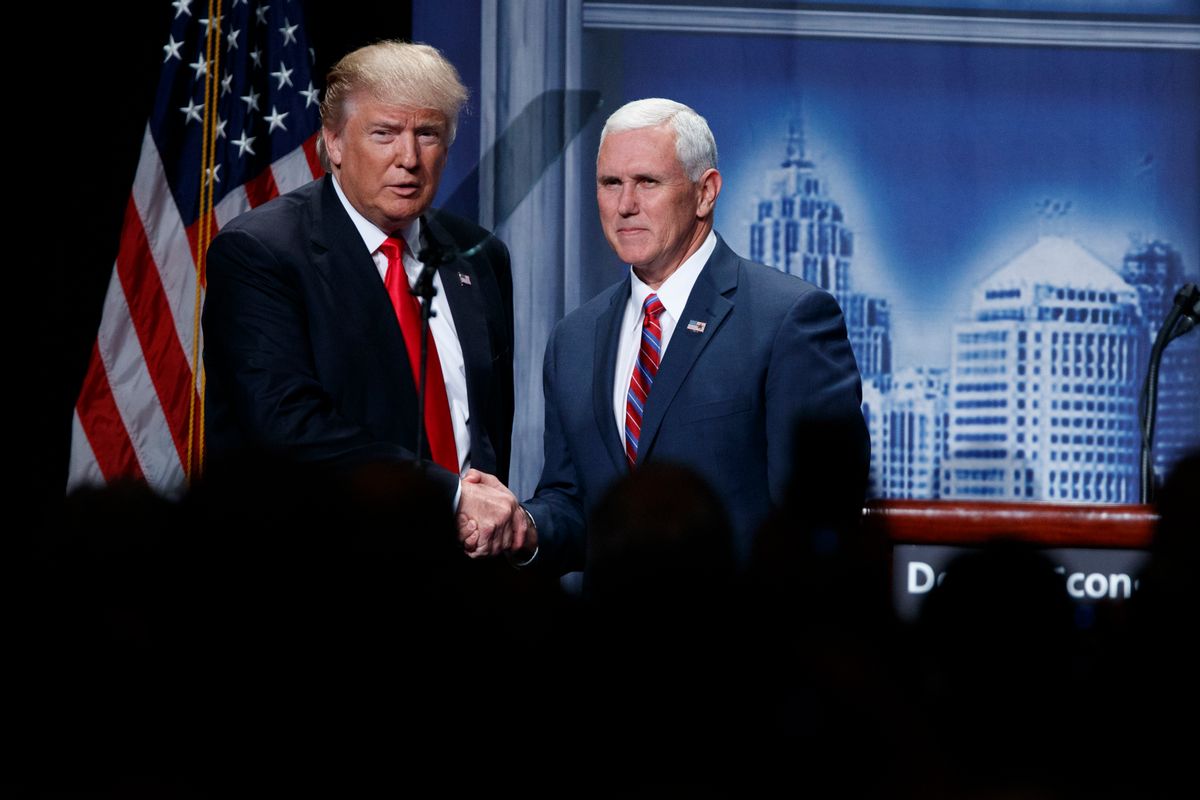 FILE- In this Aug. 8, 2016, file photo, Republican presidential candidate Donald Trump shakes hands with his running mate, Republican vice presidential candidate, Indiana Gov. Mike Pence as he arrives to give an economic policy speech to the Detroit Economic Club in Detroit. A campaign official familiar with the plans said Thursday, Aug. 18, that the GOP nominee and his running mate will tour the flood damage in ravaged Louisiana on Friday. (AP Photo/Evan Vucci, File) (AP)
--

If there is such a thing as the opposite to a buildup, the vice presidential debate last night had received a build-down. Over and over as the debate approached, the media assured us no one really cared and the result wouldn’t make any difference to the race. Franklin Delano Roosevelt’s first vice president, John Nance Garner, once said the office “wasn’t worth a pitcher of warm spit.” That could describe a vice presidential debate too. You expect underwhelming, and you are seldom disappointed.

So what did the media think? As I sit here watching the TV post-mortems and reading the early newspaper and internet returns, I find four basic verdicts:

1. Kaine’s demeanor was a loser; Pence’s a winner

Mark Shields on PBS called Kaine “caffeinated,” though Shields also felt that as the debate wore on, Pence wore thin. On CNN, longtime presidential counselor David Gergen called Kaine “wired,” and observed the camera angle did him no favors, making him look slightly sinister, even though he felt Kaine had stronger arguments. On CBS, Republican pollster Frank Luntz hosted a focus group of allegedly undecided Ohio voters who called Pence “calm,” “composed,” “eloquent” (twice) and a “knockout,” while one woman said, “Kaine came off looking like a crazy man” and another said, “Kaine came off like a jerk.” Still, for all the hostility, afterward not one voter said that his or her mind was changed.

It is interesting that CNN’s snap poll had Pence a narrow winner: 48 percent to Kaine’s 42 percent. But when you get inside the numbers, respondents seemed to agree with Gergen. Kaine was rated better on the issues, 48 percent to 41 percent; Pence was significantly more likable: 53 percent to 37 percent. Meanwhile, CNN’s focus group of undecideds, set in Kaine’s home state of Virginia, which may certainly have affected things, found him a winner, though almost unanimously they found him “aggressive,” the big word of the night. At MSNBC, Andrea Mitchell reported that some observers felt “Tim Kaine was too aggressive,” Rachel Maddow called him “over-prepared,” and NBC chief political correspondent Chuck Todd said he was “relentlessly on message,” which he didn’t intend as a compliment. Former Republican operative Nicole Wallace said both candidates were “too rehearsed,” but in the media’s eye, and apparently in some viewers’, it wasn’t the canned responses of each so much as Kaine’s jitters that was the primary takeaway.

2. Pence served his own purposes before he served Trump’s

This became a meme almost as soon as the debate ended. Chris Matthews at MSNBC immediately rhapsodized over Pence’s performance. He thought the reason the Republican No. 2 didn’t defend Donald Trump, despite Kaine’s prodding, wasn’t because Trump is indefensible (after all, Trump did say what Kaine accused him of saying), but because Pence is preparing his own presidential bid. Democratic adviser Paul Begala, the best of the CNN spin doctors, concurred, saying Pence was “throwing Trump under the bus because he is running in 2020” and concluded: “He promoted himself at the expense of Donald Trump.” Van Jones, also at CNN, later repeated Begala’s conclusion verbatim.

Within hours, the idea had taken on a life of its own. The Washington Post’s Robert Costa noted how Pence continually differentiated himself from Trump, calling it the real story of the evening. At MSNBC, chief foreign correspondent Richard Engel picked up on Pence’s aggressive policy toward Putin and Russia, underscoring how different it is from Trump’s own conciliatory policy. (After all, Putin said nice things about the GOP nominee.) But Engel fastened on something that I haven’t seen any other analyst even cite: That Pence effectively threatened war with Russia over Syria. That’s news — big news. Just not big enough apparently for the media, save Engel, to notice.

3. Pence may have won the battle while losing the war

You have to take this with a grain of salt, since so many of the pundits are partisans, and for some of those partisans on the left, this may be wishful thinking. Nevertheless, Washington Post columnist Michael Gerson, certainly no liberal Democrat though no Trump fan either, said on PBS he thought Kaine “often got the best of the arguments ... and he had a lot of material to work with.” He said Kaine won on points, Pence on style. CNN’s survey found something similar. Its respondents thought Kaine won both on the issues, as I said earlier, and on better defending his presidential candidate, even as he was deemed the loser.

This is important because those arguments may have staying power in the light of day. NBC’s Chuck Todd could have been delivering a self-fulfilling prophecy when he suggested that while Pence may have won the 90 minutes, the Republicans “may have to deal with more contradictions post-debate.” Indeed, already the fact-checking has been pretty hard on Pence, and it could get harder. Basically, he told a lot of untruths. Lots of folks look better in the moonlight than they do the morning after. Could Pence be one of them? That’s for the media to decide. (“Liar, Liar Pence on Fire” was The Huffington Post’s headline this morning.)

One more thing: According to the Associated Press, Pence came in for some pretty rough treatment on Twitter over his comment about “that Mexican thing.” This may be an instance of a division between the social media and the MSM. Clinton supporters — including her 2008 campaign manager — gleefully jumped aboard the hashtag created around the remark.

It doesn’t make a bit of difference anyway.

This is a hoary cliché by now, and it only gets hoarier when you hear it repeated two dozen times, as I did in the hours after the debate. Cokie Roberts on ABC said that neither candidate “tanked” and neither “shone so brilliantly” that the outcome was decisive, and her ABC colleague Jonathan Karl said that while Pence may have reassured conservatives who are nervous about Trump, “I don’t think this will have a major change on the race.” NBC sage Tom Brokaw declared it “kind of a standoff,” and said “they didn’t answer the big, big question of who’s going to be the next president.” And MSNBC’s Rachel Maddow dismissed this debate as a “blizzard” of talk and interruptions.

By morning, more pundits found the debate wanting. Dan Balz and E.J. Dionne Jr., both in The Washington Post, called it a disappointment. “A messy brawl, not an inspiring exchange of views,” Dionne said in what could only be called an understatement. Dylan Matthews, in his post-mortem on Vox, listed “the truth” among the “losers” of the debate. With the praise for Pence’s performance, despite his lies, David Leonhardt in The New York Times asked the media to judge substance, not style. But how could it be otherwise? The media stage a show. The candidates perform: Pence played Reagan, Kaine played Biden. Policy discussions generally are not only dismissed, but ridiculed by the press. (How many times has David Brooks commented snarkily that Hillary Clinton always lays out her 16-zillion point programs when, he says, what she should be doing is demonstrating “relatability”?)  So we got what we and the media bargained for: noise.

But, as Nicole Wallace put it, “In a day it will be history.” Maybe sooner.