Paul Ryan, Donald Trump will stump together in Wisconsin

Their joint campaign appearance on Saturday is the latest in a long, rocky history between the two 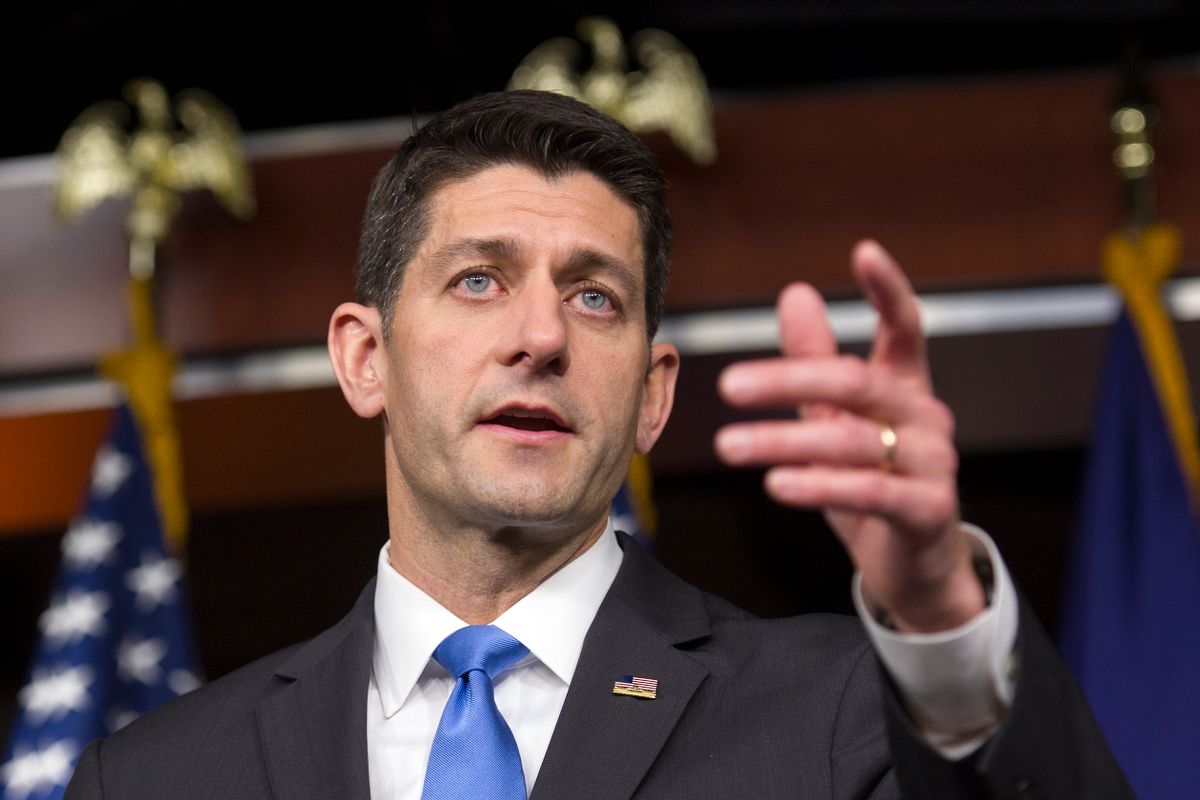 FILE - In this May 12, 2016, file photo, House Speaker Paul Ryan of Wis. speaks with reporters on Capitol Hill in Washington, following his meeting with Republican presidential candidate Donald Trump. It’s long been clear that Ryan is, shall we say, not wholly comfortable with Trump’s presidential candidacy. The announcement of Ryan and Trump’s first joint appearance of the campaign on Oct. 8 in Wisconsin _ just four weeks before the election _ was simply the latest reminder. The third paragraph of Ryan’s release about the event says that Trump “will also join Wisconsin Republicans” at the annual party festival in Elkhorn, a small city in Ryan’s congressional district. (AP Photo/Cliff Owen, File) (AP)
--

WASHINGTON — It's long been clear that House Speaker Paul Ryan is, shall we say, not wholly comfortable with Donald Trump's presidential candidacy.

The announcement of Ryan's and Trump's first joint appearance of the campaign on Saturday in Wisconsin — just four weeks before the election — was simply the latest reminder.

The awkwardly worded missive on Thursday said that Ryan would appear with top Wisconsin Republicans, including Gov. Scott Walker and Sen. Ron Johnson.

Oh, and by the way, the third paragraph of Ryan's release says that Trump "will also join Wisconsin Republicans" at the annual party festival in Elkhorn, a small city in Ryan's congressional district.

In the news business, that's known as "burying the lead."

The announcement also doesn't say that Ryan is actually campaigning for Trump, just that they are appearing at the same event.

Asked Thursday why he hasn't appeared with Trump, Ryan said: "I've been busy doing my job."

"I want to win up and down the ballot, but my primary responsibility is re-election of House Republicans," Ryan said during a brief interview after appearing at a campaign stop for GOP House candidate Lloyd Smucker, who is expected to win an open GOP seat in a district near Harrisburg, Pennsylvania.

A recap of the greatest hits of the awkward Trump-Ryan relationship:

Jaws dropped in May when Ryan withheld his endorsement of Trump just days after the billionaire businessman effectively clinched the nomination. "I'm just not ready to do that at this point. I'm not there right now," the Wisconsin Republican said on CNN. Ryan came on board the Trump train a month later: "It's no secret that he and I have our differences. I won't pretend otherwise. ... But the reality is, on the issues that make up our agenda, we have more common ground than disagreement."

Even after Ryan endorsed him, Trump declined to return the favor as Ryan faced a tea party primary challenge from Paul Nehlen. Trump even praised Nehlen, saying he was running "a very good campaign" and telling The Washington Post, "I like Paul, but these are horrible times for our country" and "I'm just not quite there yet. I'm not quite there yet." Days later, Trump endorsed both Ryan and GOP Sen. John McCain of Arizona.

Ryan joined a chorus of Republicans last December and again this summer in condemning Trump's proposed ban on Muslims entering the U.S. "This is not who we are as a party or a country," Ryan told fellow House Republicans in a December closed-door meeting. When Trump reiterated the call for a ban in June, Ryan said: "I do not think a Muslim ban is in our country's interest. I don't think it is reflective of our principles, not just as a party but as a country."

Immediately after endorsing Trump, Ryan weighed in to criticize him for saying a federal judge of Mexican-American heritage was biased against him in a lawsuit involving Trump University. Ryan said Trump's comments were "the textbook definition of a racist comment."

When Khizr Khan, a Muslim-American whose son Humayun Khan died while serving with the U.S. Army in Afghanistan, criticized Trump during the Democratic National Convention in July, Trump went on the attack. Ryan was among those who rebuked Trump and used the occasion to say again that a Muslim ban would be a mistake. "Many Muslim-Americans have served valiantly in our military, and made the ultimate sacrifice. Capt. Khan was one such brave example. His sacrifice — and that of Khizr and (Khan's wife) Ghazala Khan — should always be honored. Period."

As the GOP's vice presidential nominee in 2012, Ryan released his tax returns. In September, he urged Trump to release his. "I released mine. I think we should release ours,' Ryan said, referring to GOP nominees. "I'll leave it to him when to do it."

DAVID DUKE AND THE KLAN

When Trump in February declined to condemn the Ku Klux Klan or decline the endorsement of former Klansman David Duke, Ryan joined a chorus of outraged establishment Republicans. "If a person wants to be the nominee of the Republican Party, there can be no evasion and no games," Ryan said. "They must reject any group or cause that is built on bigotry."

In a South Carolina campaign event in February, Trump repeated his opinion that Ryan's budget plan, which called for sharply curbing benefit programs like Medicare, helped cost Republicans the 2012 election. "That was the end of that campaign, by the way, when they chose Ryan," Trump said.