Deportation to a disaster zone: Obama under pressure to stop crackdown on Haitian migrants as Hurricane Matthew wreaks havoc on island

As Homeland Security detains and prepares to deport Haitians, their already damaged nation was devastated 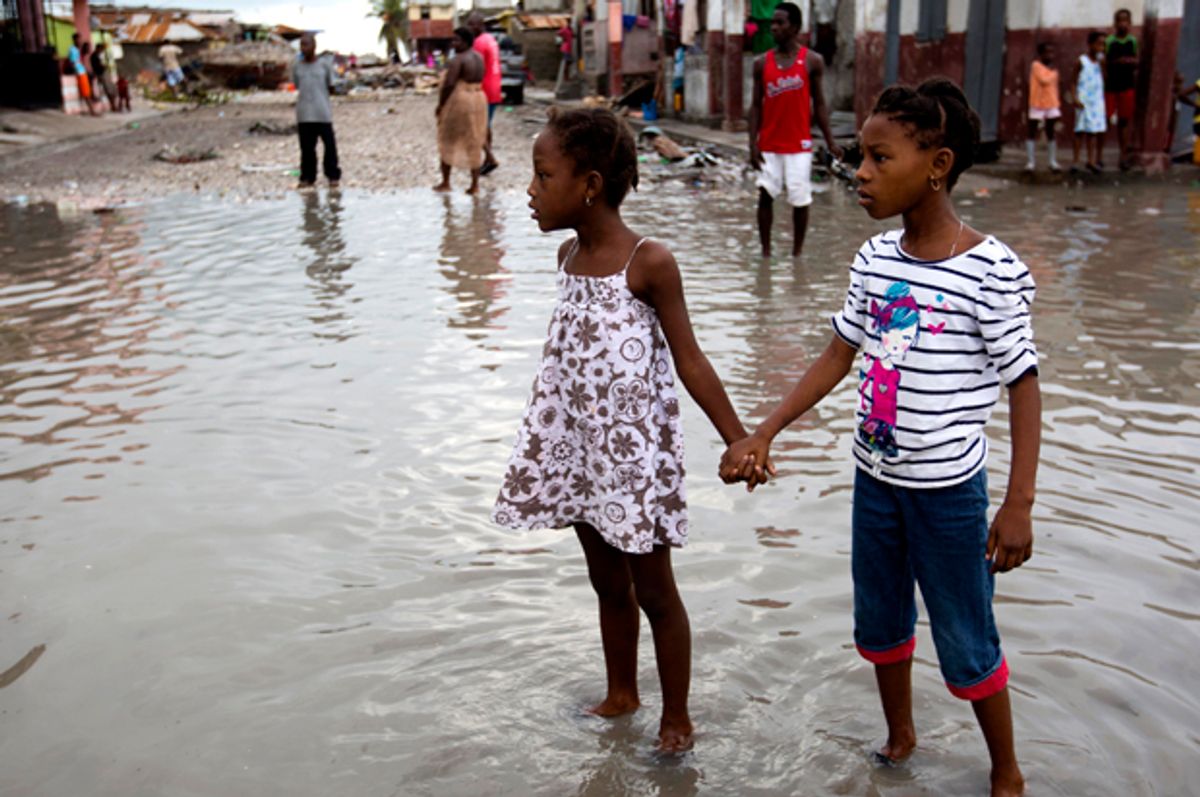 Hurricane Matthew has, as President Barack Obama put it, “hit Haiti with devastating effect,” reportedly leaving at least 283 dead and thousands displaced. This calamity, however, comes just two weeks after the Department of Homeland Security’s announcement that it would resume the regular deportation of Haitians from the United States.

Six years ago the government had granted a respite following the massive January 2010 earthquake, and the new directive puts unauthorized Haitian migrants currently in the country in jeopardy of deportation. More immediately, it has left many migrants facing an uncertain future at the U.S.-Mexico border, where thousands of Haitians have recently made their way from Brazil.

In announcing the resumed deportations on Sept. 22, Department of Homeland Security Secretary Jeh Johnson, had declared that “the situation in Haiti has improved sufficiently.” That assertion, however dubious at the time, is now in serious doubt. Advocates hope that the hurricane will spur President Obama to reverse course.

“It would make sense that the secretary reconsider his decision,” said Haitian-American Grassroots Coalition's president, Jean-Robert Lafortune, “based on the devastation of the hurricane.”

Contacted for comment, Department of Homeland Security spokeswoman Marsha Catron told Salon by email that “no further announcements have been made at this time. DHS is monitoring Hurricane Matthew and will assess its impact on current policies as appropriate.”

It’s unclear whether Haitians already in the U.S. have been deported since the new directive was issued. Cheryl Little, executive director of the Miami-based Americans for Immigrant Justice, said her organization represents a number of Haitians who face deportation and she is not aware of any new moves to detain and deport those already present in the States. More than anything, the new policy seems directed at stemming the entry of Haitians streaming up from Brazil to the U.S.-Mexico border. Haitians had flocked to Brazil after the earthquake to seek economic opportunity but that country's economy is now in a downward spiral.

In the current fiscal year, 4,844 Haitians have so far presented themselves at U.S. ports of entry and been determined inadmissible, the vast majority in the San Diego region, according to Customs and Border Protection. That’s compared to just 795 at this point last year.

“After CBP has processed individuals with no status to legally enter the U.S., they are placed in removal proceedings according to their situation, and placed into the custody of U.S. Immigration and Customs Enforcement for further disposition,” said CBP spokeswoman Jackie Wasiluk by email. “Some, but not all,” Wasiluk added, have potential asylum claims that are reviewed.

According to ICE spokeswoman Jennifer D. Elzea, 619 Haitian nationals were in custody at ICE facilities as of Sept. 24. Elzea, however, did not provide a more recent count or clarify the current protocol for handling Haitians handed over by CBP since the new directive went into effect. According to The New York Times, Haitians arriving at the border prior to the directive "were placed in a slower deportation process and released, with an appointment to appear in immigration court at a later date." Many were allowed to temporarily remain in the country. Now, according to the Times, those taken into custody are being placed in expedited deportation proceedings.

After the January 2010 earthquake, the United States not only suspended deportations to Haiti but also provided temporary protected status to many Haitians for 18-month periods that have since been repeatedly renewed. The next year the administration reinitiated deportations on a limited basis, ostensibly focusing on those who had been convicted of a criminal offense or who had posed a national security threat.

While the resumption of regular deportations will not affect Haitians with temporary protected status, it has made those who arrived too late to receive it vulnerable to deportation and left hundreds more who have traveled to the border awaiting uncertainty.

“At the time of the announcement, Haiti was still fighting to recover from the 2010 earthquake and dealing with a raging cholera epidemic,” said Little in an interview by email. “And now Hurricane Matthew had left its mark, further damaging Haiti's weak infrastructure and jeopardizing upcoming elections. So as bad as the situation was s few weeks ago, it's clearly worse now and deporting Haitians at this time seems unnecessarily cruel.”

Little wants the government to not only reverse course on deportation but also to fully extend temporary protected status to Haitians inside the United States who are not currently covered.

This is hardly the first disaster, political or natural, to strike the Caribbean island of Hispaniola’s western side. Since overthrowing French rule and slavery in 1791, residents of world’s first black republic have been the victims of forced reparations to their dispossessed former masters and endured U.S. intervention and occupation, decades of the Duvalier family dictatorship as well as the 2010 earthquake that killed more than 200,000, displacing an estimated 1.5 million and subjecting many more to a cholera epidemic caused by U.N. peacekeepers that killed thousands.

Recently, after the international relief effort racked up a record of catastrophic failure, thousands of Haitians have fled persecution and a deportation campaign in the Dominican Republic. Many ended up in a cholera-infested camp just across the border.

“The policy shift sends people back to perilous conditions and denies humane treatment to Haitian men, women, and children at our border who are seeking refuge after being displaced by the earthquake,” said Rebecca Sharpless, a professor at the University of Miami School of Law, by email.

Nicole Phillips, an attorney at the Institute for Justice & Democracy in Haiti, wrote from Port-au-Prince that the hurricane had wiped out bridges and roads necessary to deliver food and aid to victims. Since phones are still down in the hardest-hit areas, she said, the extent of the damage is still not clear. But the floodwater, she wrote, has the risk of spreading cholera or mosquito-borne diseases like Zika.

“DHS’s decision in September to halt humanitarian parole for Haitians was already arbitrary before Hurricane Matthew, given the 60,000 Haitians still living in earthquake displacement camps,” Phillips said. “This figure does not count the hundreds of thousands of Haitians who were unable to find permanent housing after the earthquake so they created a squatters community north of Port-au-Prince, where they have no land or tenancy rights or public services such as water and electricity.”

Added Phillips:“Six years was not enough time for a country struggling with political instability and poverty to recover from the worst natural disaster in modern times.”

U.S. immigration policy toward Haiti, long shaped by political fears over flotillas of boat people arriving in Florida, has in the past been criticized as harsh and even racist compared with the welcome mat rolled out for Cubans. Advocates say that the situation in Haiti was disastrous at the time of the new directive and that Hurricane Matthew has only made things worse.

“We are urging the Administration to do the right thing,” said Little, before cutting off the interview to prepare as Hurricane Matthew approached the Florida coast.