Donald Trump will be dealing with real people who might ask questions he won't like. That may not go well 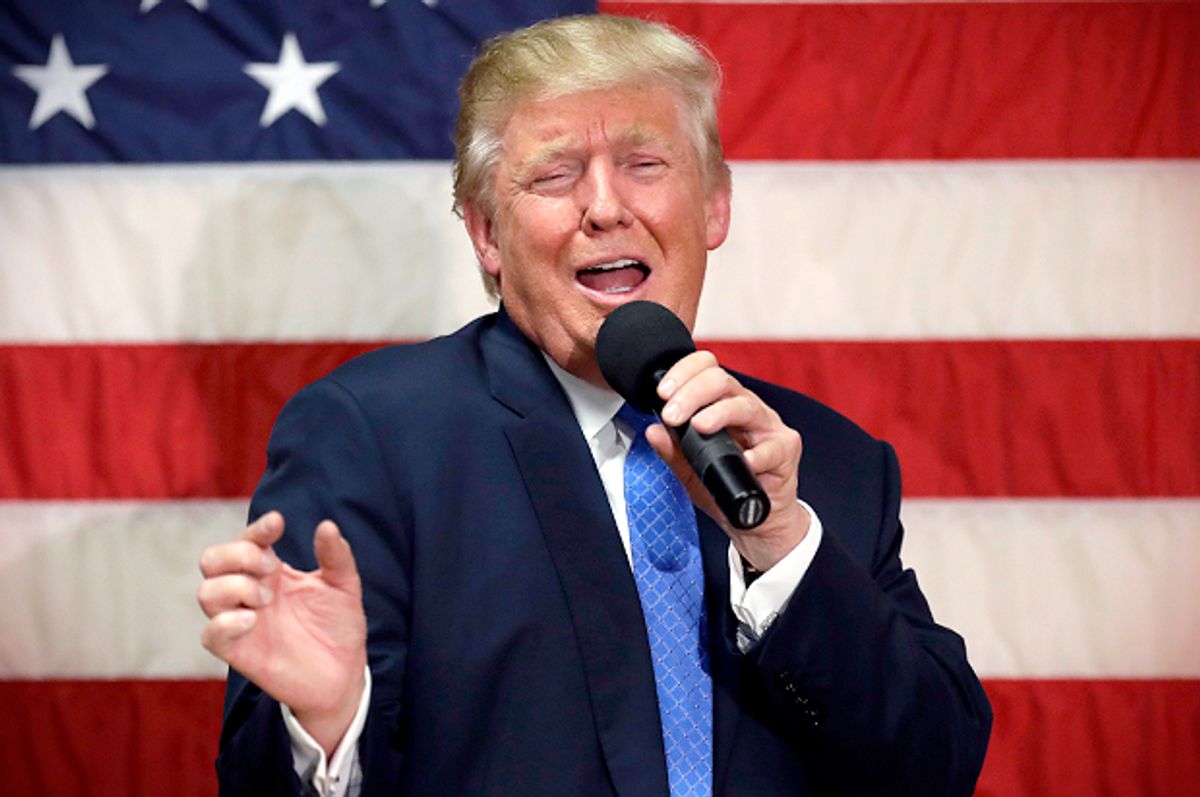 From the very beginning of the campaign, Donald Trump's presidential election strategy has been very simple: Get as much free airtime as possible and hold big raucous rallies full of enthusiastic supporters. It was very different from any other campaign in that it required almost none of the one-on-one outreach that usually goes on for months in the small early primary states of Iowa and New Hampshire with town halls and visits to diners and living rooms. Trump believed he was above that sort of thing when he said at a rally, as captured on a Twitter post:

Don’t forget that when I ran in the primaries, when I was in the primaries, everyone said you can’t do that in New Hampshire, you can’t do that. You have to go and meet little groups, you have to see — cause I did big rallies, 3-4-5K people would come . . . and they said, "Wait a minute, Trump can never make it, because that’s not the way you deal with New Hampshire, you have to go to people’s living rooms, have dinner, have tea, have a good time."

I think if they ever saw me sitting in their living room they’d lose total respect for me. They’d say, I’ve got Trump in my living room, this is weird.

In Trump's view, people don't respect real leaders if they "have tea" with them. They need to see them speaking behind a podium or perhaps from above on a royal balcony. It's uncomfortable for the plebes to be on his level, you see.

Likewise, Trump held very few town halls during the primaries and those he did were generally moderated by friendly supporters and he was only asked questions by fans. The few that weren't were rather disastrous. For instance, in a CNN town hall forum with Anderson Cooper last March, Trump made a statement that sent chills down the spines of millions of people all over the world. Cooper asked him about nuclear proliferation and after vamping in his usual disjointed fashion, Trump came out with this startling comment:

Cooper: So if you said, Japan, yes, it's fine, you get nuclear weapons, South Korea, you as well, and Saudi Arabia says we want them, too?

And when Cooper pressed him further by asking if he didn't think there was a benefit to the United States' guaranteeing a secure world with as few nuclear weapons as possible Trump replied, "There's a benefit but not big enough to bankrupt and destroy the United States because that's what's happening. We can't afford it. It's very simple."

Trump had made many shocking remarks before about committing war crimes and torturing and killing families of terrorist suspects among other things. But this exchange may have been the moment when it finally sank in just how dangerous his ideas really are. It's nearly impossible to believe that anyone, much less an American presidential candidate, would think that there is any higher priority than preventing nuclear war, but there you have it. He says it's simple: "We can't afford" it.

At another town hall forum with MSNBC's Chris Matthews a few days later, Trump once again revealed the disturbing way his mind works. Matthews pushed him on abortion rights, which Trump had clearly not fully considered until that moment:

Matthews: "Do you believe in punishment for abortion, yes or no as a principle?"

Trump: "The answer is that there has to be some form of punishment."

Matthews: "For the woman?"

Trump: "Yes, there has to be some form."

Trump had not been schooled in anti-abortion obfuscation on that topic so he blurted out the logical conclusion of the argument. In his debate this week, his zealous anti-choice running mate Mike Pence denied that he or Trump would ever punish a woman for making the "heartbreaking choice to end a pregnancy" even though Pence's Indiana is a state that famously jailed a woman for a self-induced abortion. (Just last month the Indiana Court of Appeals overturned her 20-year prison sentence for "feticide," ruling that state law doesn't actually allow a woman to be convicted for her abortion.) Any woman who trusts either one of these men on this issue is being willfully naive.

On Thursday night, Trump held a short town hall forum in New Hampshire, which had been billed as a trial run for Sunday's meeting in St. Louis. He adamantly denied that he was practicing, claiming that his rival Hillary Clinton isn't preparing either and is actually resting up so she'll have enough energy for the debate on Sunday. In fact, he indicated that he thinks preparing for the debate is demeaning in some way:

It's so disconcerting when you hear — even tonight they said, "Donald Trump is going to New Hampshire to practice for Sunday. This has nothing to do with Sunday. It's like they make you into, like a child. . . . Forget debate prep.

Trump doesn't like to take direction, apparently. After the disaster of his last debate, that's a foolish decision. He's going to be sadly disappointed if he expects the questions from the audience to be the kind of softballs he got from his ecstatic followers last night such as "What is one of your earliest memories as a child and why do you think it stands out?" and "What would you say to convince Hispanics who were deceived by Barack Obama, Hillary Clinton and the biased media to vote for you?" (Answering that second one, he informed the crowd that in Nevada the Hispanics prefer to be called Latinos. Seriously.)

These general election town halls involve a whole other level of performance, requiring the candidates to listen and show empathy to average people in the audience, respond to the moderators and volley back and forth with their opponent. Even a self-described genius and practiced TV celebrity like Trump may not have a natural talent for it. If his performance in previous similar formats is any indication, the only thing he has a natural talent for in these situations is putting his foot in his mouth.