J.K. Simmons' strong silent types: "Some, because of their own upbringing, or pain or self-consciousness, have a difficult time letting it out"

Salon talks to the veteran character actor about "The Late Bloomer," masculinity, fatherhood and his poker skills 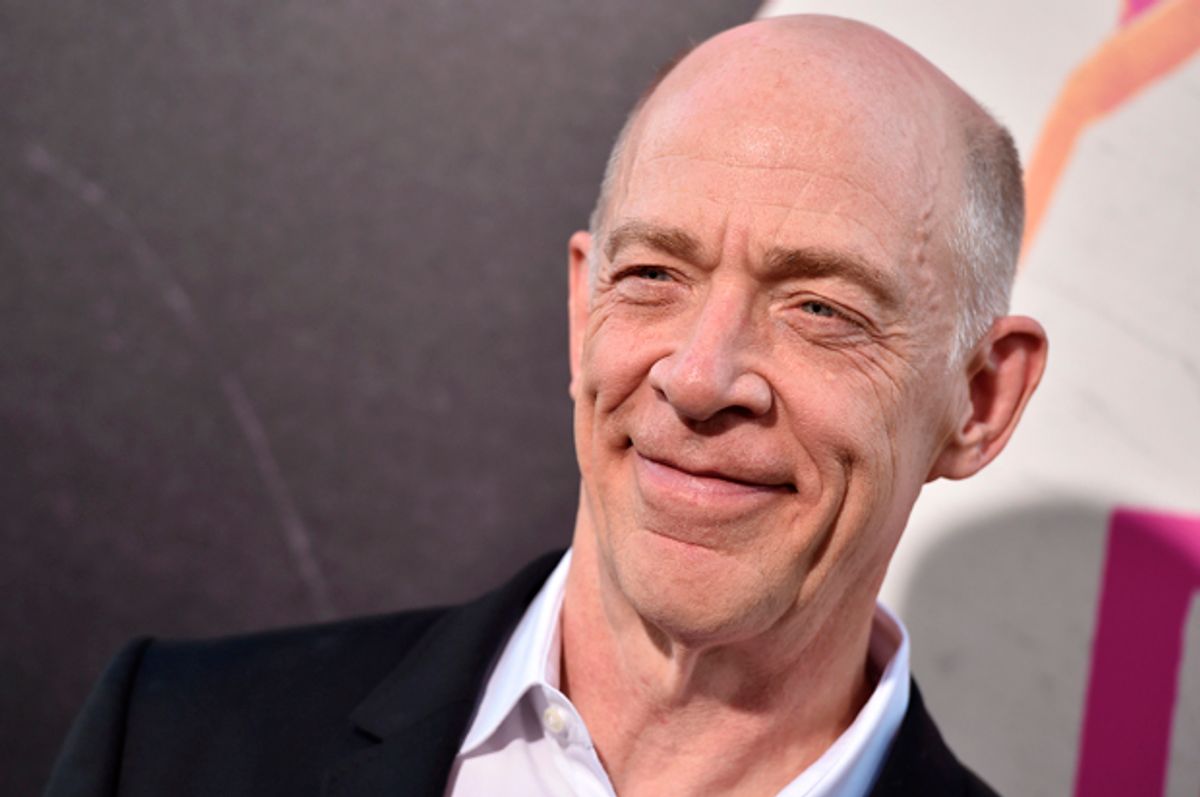 J.K. Simmons is one of those character actors who enliven every film they're in. He had a plum role as Zipper, a love interest for Susan Sarandon’s lonely widow in “The Meddler,” a film released earlier this year, and plays the head of the Treasury Department’s Crime Enforcement Division in the thriller “The Accountant” opening next week. Simmons’ cameo as a club owner in the musical “La La Land,” out in December, has reunited him with director Damien Chazelle, who directed Simmons’ Oscar-winning performance in “Whiplash.”

But right now, Simmons has a supporting part in an amusing new sex comedy, “The Late Bloomer” directed by Kevin Pollak. Based on a true story, the film's 30-year-old sex therapist Peter Newmans (Johnny Simmons, no relation to J.K.), grapples with puberty after a brain tumor suppressing his pituitary gland is removed. J.K. Simmons plays Peter’s father, James, while his “Thank You for Smoking” co-star Maria Bello portrays his wife.

The humor revolves around Peter’s coming-of-age once he starts to experience horniness, acne, mood swings and other signs of puberty. While James is at first befuddled by his son’s behavior, he eventually becomes the dad that Peter needs. Simmons, who also played a kindly father in “Juno,” presents a wry sense of humor about his son’s predicament but also a touching speech that helps Peter turn from a “boy” into a “man.”

Simmons chatted with Salon about his films, masculinity, fatherhood and his poker skills.

“The Late Bloomer” opens with a title card that explains, “Some ridiculously fucked-up shit happened to this guy.” What memories do you have from puberty or another strange transformation you have undergone?

Children often don’t meet the expectations of their parents. James seems initially disappointed by his son. Can you talk about that?

It’s inevitable that you want your kid to be like you — and certainly you want them to be like you, only better. You try to guide and instruct them along that path. In the case of “Late Bloomer,” things came off the rails because my character wasn’t being the father of a boy who becomes a man. I hate to use the D word — disappointment — but he’s mystified and puzzled. He loves his kid, and his kid is successful and seems happy enough, but he’s not the kind of regular guy that the dad himself is.

What observations do you have about being a father? Or what do you recall about your relationship with your father?

Both of my parents did a surprisingly good job of letting their kids be who they were and they kept us safe and fed and provided for our needs. They did not put any expectations on us; they let us be who we were. And that’s what my wife and I are trying to do with our kids.

I coached my kid in baseball for six years. I love baseball. I used to play, and I consider myself an athlete. Since it was a long time ago, I consider myself more of an athlete, since we self-aggrandize. I knew from coaching my son that he was athletic, but he doesn’t love this, and I sensed he was doing this for me because he knew I loved it. That’s sweet, but that’s kind of messed up, too. I need to let him be who he is.

What observations do you have about “acting” vs. “being” a man, which James says in his speech to Peter?

That was a sort of surprisingly beautifully idea, though that I had never heard or thought of it in those exact terms: differentiating between acting vs. being. It’s an old-school thing, but I’m old. That traditional, macho, stiff-upper-lip, boys-don’t-cry masculinity — it’s the world this guy grew up in. He has enough maturity and self-awareness for his son to have the wisdom and know the difference. He learned it as we all do, by making mistakes. It’s a powerful, honest and true little scene.

You tend to play strong silent types rather than touchy-feely characters. Can you discuss your penchant for playing tightly wound characters, like Fletcher in “Whiplash” and James in “Late Bloomer?”

To me, the most interesting aspect of playing those strong silent types — the traditional, masculine dad, who keeps things close to the vest — is because everyone has stuff going on inside them. Some are easier to read. And some, because of their own upbringing or pain or self-consciousness, have a difficult time letting it out. That’s much more interesting to me. When it does come out, it plays the exception to the rule.

“The Late Bloomer” features Maria Bello, as James’ hippie-dippie wife. What can you say about your characters’ marriage and working with Bello again after “Thank You for Smoking?”

I’ve been a fan of Maria’s for a long time. She’s a beautiful woman, but she’s a character actor, and she’s done a wide variety of roles. She has the career I hope to be having. She doesn’t get pigeonholed. [Our characters’ marriage] is one of those relationships where you go back 30 years and see what brought them together — because it’s not a shared philosophy of life. It was sex. They found a bond that supersedes who they are and how they do things. It’s not parallel lines but complimentary. She provides some of his missing pieces and vice versa.

As a character actor, you disappear into whatever role you have it seems. Do you feel after the success of “Whiplash,” you have more flexibility in your career? What appeals to you about making a film like “The Late Bloomer?”

Because it’s such a cool story and that it’s based on a real guy. If I hadn’t known that, I would have had this image of TV sitcom writers pitching wacky ideas. The fact that this happened was interesting. There were different versions of the script bouncing around, and I got potentially involved before the current script and Kevin [Pollak] was attached to direct. I’ve known Kevin across poker tables for years, so when he asked me to do it, I said yes.

Are you a good poker player?

I’m a mediocre-at-best poker player. I’m not in Kevin’s league but I try to play in it anyway.

You have several films coming out in the next few weeks and months including “The Accountant” and “La La Land.” What can you say about playing a T-man in “The Accountant?”

The script for “The Accountant” came to me shortly after “Whiplash,” and they waited to bring it out for the prestige. The script knocked me over. It gets more complex as it goes, and they use the jigsaw puzzle as the logo because there are a number of puzzles in the movie — not just plot twists, but characters, too. It’s a genre-bending action thriller-drama-love story-family story, with comic elements. It’s quite a complex movie.

In “La La Land,” your character fires Ryan Gosling’s Sebastian for playing bebop and not traditional Christmas tunes and popular songs. How did that come about after playing an exacting music teacher in “Whiplash?”

Damien [Chazelle] asked if I wanted a cameo in “La La Land,” and we appreciated the irony of me playing a guy who basically hates jazz.