The R.E.M. bassist's new "Concerto for Rock Band, Violin and Strings" brings the rock and symphony worlds together 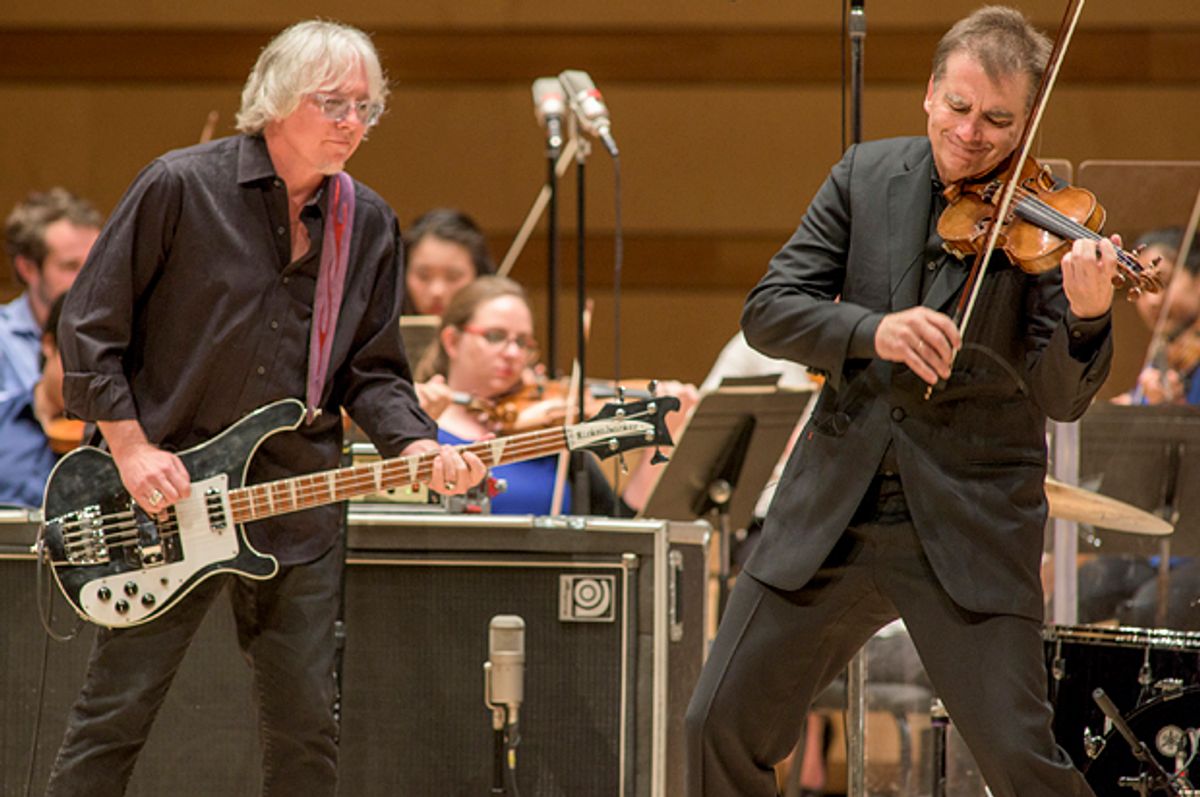 Mike Mills invokes a Rolodex of metaphors to make sense of his latest post-R.E.M. venture. “If anything, it's extreme because we’re moving away from the center of both rock and classical music and towards something so unknown,” Mills says.

Five years after the world’s most beloved indie-turned-mega-rock band decided on an early retirement, members of R.E.M. have not given up on productive output through other means. Peter Buck has released a collection of indispensable punk records on limited edition vinyl. Michael Stipe has put the training that he received at the University of Georgia as a visual artist to work by teaching courses at New York University. (Drummer Bill Berry, who left the band following the release of 1996’s "New Adventures in Hi-Fi," continues to live on a farm just outside of Athens, Georgia.)

Mills is currently preparing for a fall tour around the U.S. to promote "Concerto for Rock Band, Violin and String Orchestra," which he composed for violinist and longtime friend Robert McDuffie. In addition to traditional rock accompaniments, Mills and McDuffie have enlisted The Fifth House Ensemble, the venerable Chicago collective, to fill in the gaps where guitars and drums cannot. There's certainly no lack of talent involved; the in-demand composer David Mallamud was drafted to arrange Mills’ movements. “It’s like the Starship Enterprise,” Mills tells me.

For this act in his career, Mills boldly returned, at least in terms of his inspiration, to his roots in Macon, a town that boasts an impressive list of talent and music industry monoliths such as Little Richard, Otis Redding, Capricorn Records, and McDuffie, who now resides in New York. McDuffie has recruited some of the advanced students at The Robert McDuffie Center for Strings in Macon to perform with him and Mills this coming fall.

Like Mills, McDuffie came of age listening to The Allman Brothers, a band that he says was his first engagement with chamber music. “Whipping Post” from "At Fillmore East," McDuffie tells me, is an exemplar of how rock music can borrow from classical principles. It’s no coincidence that Mills named the last movement of their concerto together “You Can Go Home Again,” a nod to the musicians of Georgia who inspired him decades ago.

Now in their late 50s, Mills and McDuffie take friendly jabs at one another’s teenage taste in popular music, accusing the other of having liked The J. Geils Band during their days in Macon. It’s obvious that the two old friends enjoy one other's company. Despite knowing one another for five decades, the rock concerto is their first collaboration together.

“Well, Bobby knew that I was out of a job,” Mills says jokingly regarding the origins of the project. “It’s true that I could’ve done this while R.E.M. were extant, but I didn’t want to,” he adds.

McDuffie admits that there were somewhat selfish motivations for wanting to team up with Mills. “It started with me wanting something to fill my soul. Orchestras, when they have a premiere, are usually one performance and that’s it. I wanted this to have legs — not to have one concert and say, ‘Wasn’t that fun?’ It was a sincere, but selfish endeavor,” McDuffie says.

Though ties between Mills and McDuffie run especially deep and are no doubt the draw for the pop and classical audiences that will be immediately attracted to the project, the musicians comprising the backing band are more than qualified to take up the task of providing accompaniments.

“I thought of all of these great musicians from all over the country. But, I live in a town that probably has more great musicians per capita than any other town in America. Why not turn to where I live? There’s already a Georgia connection between me and Bobby. Why not maintain and strengthen that? I could’ve thrown a dart, but I didn’t. I was very particular and got the guys I wanted,” says Mills.

Joined by guitarists William Tonks (formerly of Barbara Cue and Six String Drag) and John Neff (formerly of Drive-By Truckers and Japancakes) and drummer Patrick Ferguson (currently of Five Eight and formerly of the Psychedelic Furs), the musicians supporting Mills and McDuffie have already gotten a taste of how audiences will respond to this particular amalgamation of classical and rock.

After premiering at the Toronto Symphony Hall, the group later performed in Aspen and Rome. Each of those performances included a different set of string players to accompany the core ensemble, which Mills concedes was somewhat anxiety-inducing.

Nevertheless, Mills is quick to point out that his newly-formed band is capable of rising to the occasion of playing in wildly different environments and dealing with somewhat unorthodox reactions from crowds.

Tonks notes that the audiences in Aspen were as raucous as any typical rock and roll show. He shows me a picture that he took from the stage of the crowd in Aspen. No explanation is needed for the photograph; the crowd is going wild at an orchestra hall, a bizarre sight for all involved. “Aspen didn’t know what to expect. They were handing out earplugs,” says McDuffie of the uncharted nature of the project.

Mills and McDuffie may be at the helm, but they allow for a great deal of room for improvisation from their Athens-sourced band. In fact, Mills and McDuffie encourage the band to actively participate in carving out their own space within the group. “When there’s something that I want, I say it,” says Mills of his status as the band leader. “But part of the fun of creation is allowing other people to create along with you. I want their input and imagination,” he adds.

That imaginative spirit will be archived for posterity when Mills and McDuffie release “Concerto for Violin, Rock Band and String Orchestra” on Oct. 14 through Orange Mountain Music, Philip Glass’ record label.

Though there is plenty of evidence to suggest that audiences are responding positively, matters of commercialism and financial viability aren’t far from anyone’s mind. Mills isn't afraid to respond to questions about how a collection of movements from his concerto will fare in this difficult era for the recording industry. This forthcoming release is hardly an attempt to cash in, he emphasizes.

“I would rather release this than a traditional rock record. At least this will make people sit up and pay attention,” Mills says when asked about the chances that longtime R.E.M. fans will buy the concerto album. “I’ve never released records just to sell them and that’s going to be the case with this as well. I just want it out there,” he says.

“Whatever it is going to sell, from my perspective, will be a huge success,” interjects McDuffie with a laugh. Although classical musicians rarely have the opportunity to boast about their record sales, McDuffie eventually concedes that as far as classical musicians go, he's had an impressive career on that side of the business.

Still, McDuffie's 150,000 units can't hold a candle to R.E.M.’s seemingly unfathomable 90 million copies that were sold between 1982’s “Chronic Town” and “Collapse Into Now,” the band’s final studio LP released in 2011. Mills and his former bandmates in R.E.M. are likely to see a spike in record sales after the band celebrates the 25th anniversary of “Out of Time” by re-releasing the milestone album this fall.

Regardless of sales projections, the impending release will be aided, in part, by an endorsement from Glass and his recording company. “It will lend credibility to people coming at it from the classical side of things,” Mills says of the partnership. “We’re trying to draw in everybody that we can draw in. I want classical fans to appreciate this. I want pop fans to love it. I want rock and roll fans involved. I think there’s something for everybody that cares to pay attention to it.”

McDuffie’s long career in classical music has allowed him to take stock of the momentous occasion. “I consider Philip Glass and Mike to be two of America’s greatest composers. I knew that it’d be beautiful. I knew that it would be something that I’d want to do more than once. With Glass’ label — not that we needed a blessing — it’s nice that we have his universe behind this,” adds McDuffie.

With the release date and tour for the concerto looming, Mills notes that there are more recordings from the group on the way. The band was recently joined by engineer David Barbe at Tree Sounds Studios just outside of Atlanta to record more movements from the project.

While those in the band are eager to perform, their rock music backgrounds have made recording and performing the concerto a rewarding, if not unusual experience, for everyone involved.

“I’ve learned not to expect anything. I like to go in and just see how it goes,” says Neff. Calling on his extensive background playing pedal steel and guitar for some of Athens’ elite bands, Neff has embraced the challenge of learning his parts on the fly.

Ferguson, who is used to drumming in heavier rock bands, confesses that it has taken him some time to get used to performing in this quieter mode. “I have to be really conscientious about being emotionally connected with the music without putting the pedal to the metal,” he says of his current gig.

For Mills, finding a way to subvert the rigid protocols associated with the orchestra without alienating any of the talented classically trained musicians involved with the project is no doubt a top priority.

“The people that have been in the classical world, they get really set in their ways — as can any rock musician. But we're going to need a conductor that understands that he's not driving the train. He's the link between the band and the orchestra. That's not something that every conductor can do. We want a maestro with an open mind,” Mills says.

Indeed, the factions of rock and classical involved with this endeavor have already found a way to coexist, mostly through a profound respect for the other’s craft. “As a rock musician, you spend your whole life looking into the window of fine art. You have to sometimes fight a tendency to feel excluded from things like the orchestra,” notes Ferguson.

The Juilliard-trained violinist in the bunch emphasizes that perspective is everything. “That’s so funny. We look at the rock musicians and say, ‘Why can’t I be cool?’” says McDuffie in response to Ferguson.

While the group is looking forward to the tour, which will begin Oct. 20 in Miami and end Nov. 7 in Chicago, the stop in Athens will be particularly special for those now living in the Southern college town that spawned a whole movement of independent rock.

“It’ll be punk rock in a punk rock town,” says Tonks of his upcoming hometown show. Although he may anticipate performing in front of familiar faces, Tonks recognizes that he and the rest of the band are tasked with making the event memorable for the audience. “Every demographic and every age group are going to have some way of connecting to this music. Whether or not we connect to them, that’s up to us,” he adds.

Though the concerto has taken several hours of rehearsing to perfect before taking the show on the road, everyone’s goal is to transmit an intangible feeling to any member of the audience who will take the time to listen.

“There are no rules for what we're doing and that's the joy of it. It’s very liberating,” says Mills.

EXCLUSIVE | Listen to the premiere of “Pour It Like You Mean It,” the concerto's first movement: