Off the rails: The real mystery of "The Girl on the Train" is why it never gets on track

Despite an excellent turn by Emily Blunt, the adaptation of Paula Hawkins' bestseller barely scratches the surface 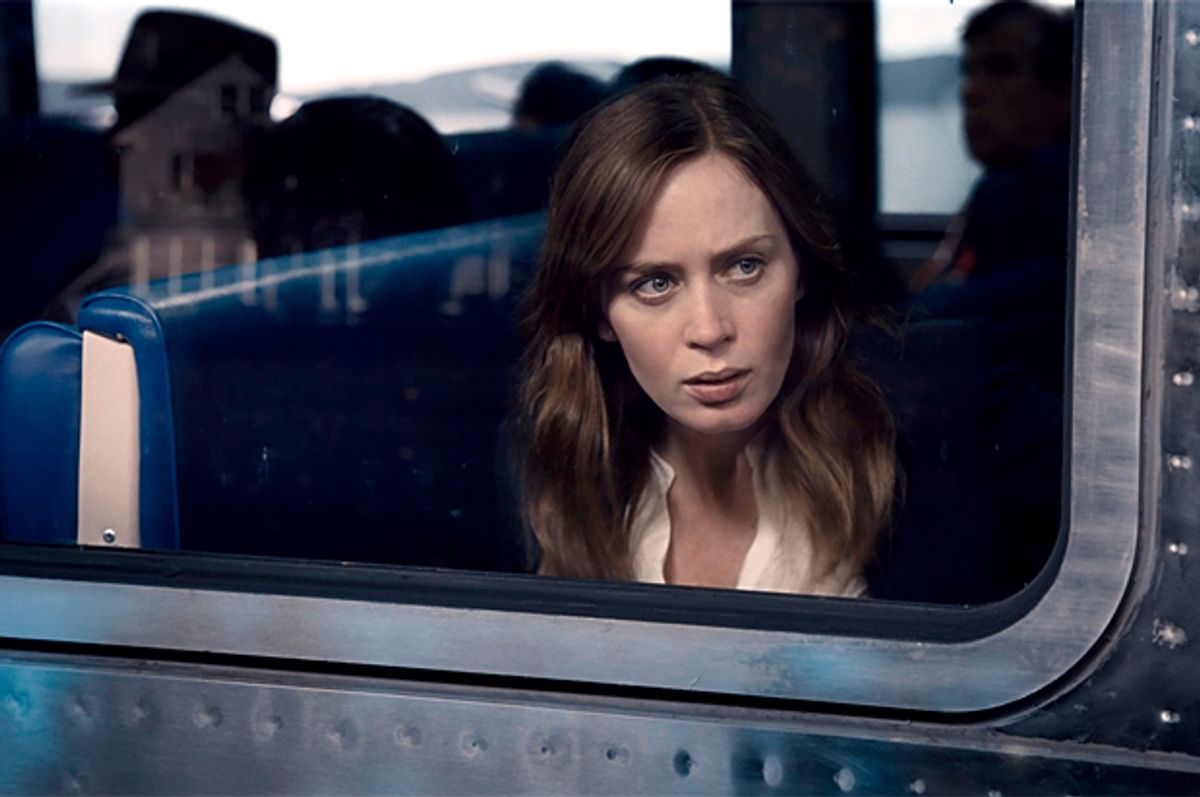 “The Girl on the Train” should have been left on the shelf. Paula Hawkins’ mega-bestseller is a gripping tale with shades of Hitchcock: Rachel turns to booze after she finds out she cannot get pregnant, a revelation that slowly eats away at her marriage. Two years later, she’s become the lonely woman in the park drinking vodka from her water bottle — along with the spare she has stowed away in her purse. A frequent rider of the New York Amtrak, Rachel witnesses the potential key to a murder investigation on one of her commutes to nowhere: Megan, a woman whose perfect life represents what she has lost, kisses a strange man on the porch. He is not her husband. Two days later, Megan goes missing.

The film adaptation, written by Erin Cressida Wilson (“Secretary”), has the feel of a hastlily written book report of a novel you loved. If it came across your desk, you would probably give it a C-, along with feedback on how to improve on the next assignment. “The Girl on the Train” does not lack for potential. Emily Blunt, giving her finest performance to date, proves once again she’s one of cinema’s most versatile actresses. Blunt has shined as the sarcastic assistant to a fashion mogul, the singing wife of a baker, a female warrior battling aliens, and now an alcoholic who can’t trust her own memory. Rachel blacks out on the night of the accident, and as events unfold, it becomes increasingly unclear if she’s chasing a killer or chasing herself. Blunt, playing a woman who is a walking open wound, makes her character’s tortured psyche deeply felt.

The movie around her, though, only goes skin deep. It also serves to accentuate the nagging flaws of its source material. “The Girl on the Train” is the kind of film in which no one seems to have friends or know anyone but the other characters in the movie. Megan, played by Haley Bennett (“The Magnificent Seven”), just so happens to be employed as the nanny to Tom (Justin Theroux), the ex-husband Rachel still calls regularly. Megan also lives next door to him. The young woman, who describes herself as the “mistress of reinvention,” takes long jogs to literally run away from her husband, Scott (Luke Evans). Although her life looks perfect from the distance of a passing train, she’s got issues. Megan’s beau desperately wants a child, and she doesn’t. Scott grows possessive and clingy as the two grow further apart.

In “The Girl on the Train,” characters speak not like human beings with motivations but like murder suspects whose every utterance must heighten the audience’s suspicion. A stranger Rachel frequently spots on the train (Darren Goldstein) was mysteriously present the night of the murder, but as seen in a hazy, poorly filmed flashback, she cannot remember why he was there. When Rachel confronts him, the man explains that he found her after a drunken fall and she refused his offer of help. Rachel, flabbergasted, wonders what could have possibly happened that night. He tells her, “It’s probably the worst thing you can imagine,” as if that’s something that people who have never spoken before casually say to each other. The film has so many red herrings that you can picture the crew walking around with buckets of paint.

Another suspect is Megan’s therapist, Kamal (Edgar Ramirez), the man Rachel believes was macking Megan on the day of her disappearance. Ramirez, superb as a Marxist revolutionary in Olivier Assayas’ “Carlos,” makes little impression here. The swarthy Venezuelan actor, who never met a J.Crew sweater that didn’t fit him perfectly, is on hand to act as a lusty stack of man meat. Rachel imagines Kamal and Megan having steamy makeout sessions in his office, along with the constant rodgering she is receiving from her husband. With all the action she’s getting in Rachel’s fantasies, it’s a wonder Megan has time to hold down a job. Evans, still looking for his breakout role, disappears into the wallpaper as the woman’s eye-candy husband, who doesn’t appear to care much that she’s missing. Evans’ portrait of grief looks like a GQ spread.

“The Girl on the Train” films these many carnal encounters in a filtered high gloss that appears to have been lifted from Sam Taylor-Johnson’s BDSM-lite adaptation of “Fifty Shades of Grey.” Everything is blue, grey, and too tasteful, the kind of trash that thinks it's Oscar-bait. The novel is often compared to Gillian Flynn’s “Gone Girl,” another book about an unreliable narrator. It’s clear that this movie wants what David Fincher, who helmed the acclaimed 2014 adaptation of "Gone Girl," was having — namely a Best Picture nom. Whereas Fincher’s film was a subversive and witty commentary on modern gender politics, “The Girl on the Train” is merely tawdry, the kind of movie that might have starred Sharon Stone or Demi Moore in the mid-’90s. Unfortunately, the quality is more on the level of “Sliver” than “Basic Instinct.”

Blame should be laid at the feet of director Tate Taylor, who has no real sense of what made the novel so sensationally effective. Aside from its bodice-ripping elements, Hawkins’ text is a solid examination of gaslighting, the term popularized by George Cukor’s 1944 film. In “Gaslight,” Ingrid Bergman plays Paula, a woman whose husband, Gregory (Charles Boyer), attempts to convince her that she’s insane. He isolates her from friends and family members, telling Paula that her fragile nerves make interactions with the outside world dangerous to her health. Gregory even manages to convince her she’s being haunted by a ghost, while telling her it’s all in her mind. After Rachel’s blackouts, Tom informs her of the unspeakable things she did, much to her horror. This doesn’t sound like something Rachel would do.

Taylor’s film, in which thematic subtext is merely another plot point to be checked off, is more or less what one could expect from the guy who brought us “The Help.” Rather than a nuanced examination of the struggles women face to be seen as credible, he again serves up a poop pie. "The Girl on the Train" misses a real opportunity with Anna (Rebecca Ferguson), the mistress who became Tom’s new wife. Anna, a bottle blonde who possesses a closet full of ill-fitting sweaters, is a sadist who believes herself to be a saint. “I miss being the other woman,” she laments in voiceover, harking back to the days in which she and Tom would sneak around, secretly hoping to get caught. Anna seems to take real pleasure in Rachel’s sorrow: During a pivotal moment in the film, it seems as if she would even kill her husband’s ex in order to preserve her illusion of happiness.

“The Girl on the Train,” however, never asks why Anna does what she does — or why anyone does what they do. Taylor films the woman, like all of his characters, in strained close ups, as if to suggest an intimacy and introspection that isn’t there. Anna might as well be posing for a subway ad. That’s a shame because there’s a much better version of this material waiting to be made, one willing to dig into the meaty, slightly unsavory aspects of its source text. There’s a suggestive scene in which Scott makes a visit to Rachel’s apartment, looking for answers. Having had one too many, he falls asleep. With everything she used to lust for so badly at her fingertips, Rachel begins to caress him. What exactly is happening inside that vodka-soaked brain in that moment? It’s a mystery “The Girl on the Train” never solves.