Fighting the power and speaking for the earth: The explosion of Native American hip-hop

From the reservations to the big cities, a new generation of Native American hip-hop performers emerges 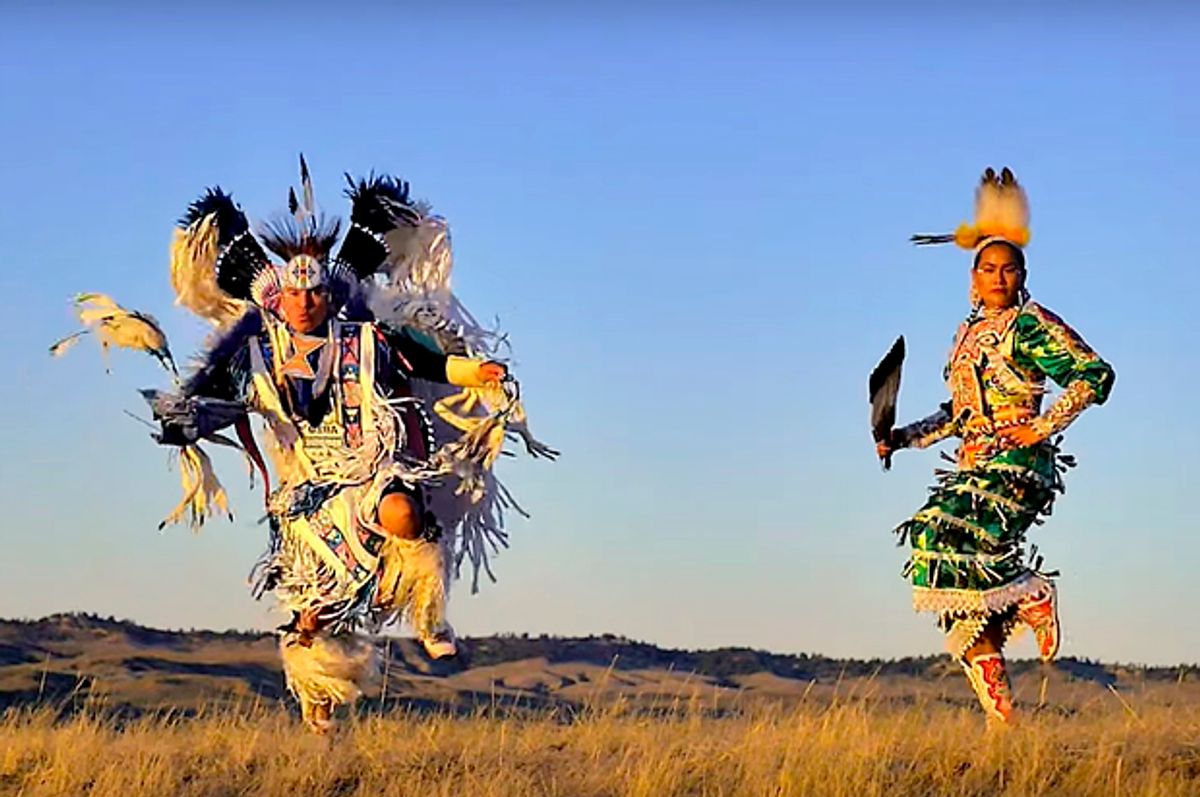 “I see 20/20 … they pimp us for money. Revising our story, they’re televising ... Hey Diane Sawyer, I am a warrior, give me your camera and send me your lawyer,” raps Frank Waln, a young Sicangu Lakota hip-hop artist from the Rosebud Reservation in South Dakota. His 2011 track “Oil 4 Blood" continues on a political bent, referring to war-mongering politicians who seek mineral wealth but "want the earth dead."

Waln's politically charged subject matter is fairly representative of a whole new generation of Native hip-hop performers. But Waln is not just your typical "angry young man" from a reservation. A recipient of the Gates Millennium Scholarship, he attended Columbia College in Chicago, originally intending to become a doctor. He wasn't always as focused in his life.

"When I was a kid, music was a sanctuary for me. I was very insecure," says Waln, who started playing piano at age 7."Part of that was growing up in a rodeo cowboy family, and we had to just 'cowboy up.' We were Native Americans in survival mode with a history of genocide."

His first solo album, called "Tokiya," will drop later this year. In the meantime, Waln is releasing a new track entitled “7" this week, on Indigenous People’s Day. (That’s the holiday celebrated by many Natives and supporters of Native rights instead of Columbus Day.) "7" is a reference to the Seventh Generation philosophy originating in the Iroquois Confederacy that all Native people strive to live by. “The theme of violence towards Native people is in the new album, like pipelines being built on our land,” Waln says.

A particular focus of many native hip-hop artists' music today is environmental damage. "Back when I wrote 'Oil 4 Blood' in 2011, it was born of frustration," Waln says. "The government was trying to build the Keystone pipeline on our Rosebud Reservation." He's excited about the recent wave of activism around the pipeline issue: "It’s really dope what’s going on in North Dakota – those kids on the rez ran to DC!"

Native hip-hop, especially when it comes from the reservations, has a unique flavor, blending hip-hop with Native culture. Sound and style differs between regions. There are seven reservations in South Dakota, and the sound is different from each. "We are all pioneers," says Waln. "For the longest time, we never got looks from mainstream media, so even this article is an example of Native messaging getting a closer look."

Supaman, born Christian Parrish Takes the Gun, is an Apsáalooke Native American from the Crow Nation Reservation near Billings, Montana. In 2014, he was Artist of the Week on MTV, and he’s unique. He rhymes about some of the same issues better-known African-American rappers do, but there is an added element of reservation life. His parents were alcoholics, and he was a foster child until he went to live with his grandfather. Reservation life provided too much idle time and too much poverty, and no good came of it. He was involved with crime and drugs. Takes the Gun says hip-hop – in its more negative aspects – influenced him to play the part of a gangster.

But in his early 20s, Takes the Gun realized this was not the way he wanted to live – and concluded that his music sent the wrong message to his fellow Native young people. So he changed course. After a record deal with a Seattle label saw him leaving his wife and child behind and living a rapper’s lifestyle, Supaman found religion and returned home to Montana, embracing his ancestral traditions and cultural mores. Today, he's an educator and performer, and one of the best-known Native hip-hop acts.

“'Rapper's Delight' was one of the first songs I heard,” he recalls. “I liked the drums, the percussion; I like all kinds of drums. If I’m producing, I have to have the right kind of drums.” Supaman performs in full tribal regalia, a personal approach that other artists don’t typically use. He says he knew this gambit would get audiences talking, and makes clear he is using his tribal dress not as a costume, but toward education.

“We would be invited into schools to educate kids, sharing music, culture and hip-hop," he says, "and we realized wearing regalia was a great tool to reach the person who was watching and show [we're] proud of who we are. It also told other Natives they should be proud, too.” The dance Supaman does when he performs is also unusual, contemporary form of powwow culture dance called men’s fancy dancing that originated in Oklahoma. “It’s good to have all these elements to speak to audiences," he says, adding elements both Native and non-Native audiences probably haven't seen before.

Reached on the plane on his way to perform and speak at Harry Belafonte’s Many Rivers to Cross festival in Atlanta, Supaman says he makes music to address issues of social injustice. He’ll be singing with artists like Dave Matthews and T.I., and speaking about core social-justice issues, he said. “Most of the artists are about that theme, and positivity. I’ll be talking about the Dakota Access Pipeline and Sacred Stone Camp, which I had the opportunity to visit for a few days recently. The unity of people coming together; people from all over the world, standing up for simple things -- clean water. The little guys, the regular people fighting against oil companies. That was inspiring."

Tall Paul, an Ojibway M.C., hails from Minneapolis. He says his life’s purpose is to spread messages of peace. He grew up listening to hip-hop from all regions, initially making music for fun. In 2009 he dedicated himself fully to the art form. He says that his goal is to make people shed tears of joy and pain, and to share a common experience.

Molly McGlennen, an Ojibway poet, is an associate professor of English and Native American Studies at Vassar College. She says there is a direct link between the Native oral storytelling tradition and the storytelling of hip-hop as a form of expression -- and ultimately a form of resistance. “I’m interested in Tall Paul, because he’s using the Ojibway language and English to convey the experience of Ojibway people in Minneapolis," she says. "The issues that he speaks to resonate with Ojibway people, but at the same time, he’s also speaking to broader indigenous issues of class and race and struggle,” she says. “Because he’s speaking to so many layers of society, indigenous and non-indigenous, he’s an example of the forms of indigenous storytelling. He’s a powerful voice in the contemporary scene right now. He’s fabulous."

Throughout Frank Waln's new album, he talks about politics and politicians. "I don’t believe in U.S. politics," he says. It's all driven by money and capitalism. Honestly, as a Native person, I can see how there are people who don’t want to participate in the system. It's parasitic, built on exploitation of human beings, stolen land and labor." Waln recently scored a short message film called "Miranda and Shonta," about harmony with animals in nature; the backdrop is the Sacred Stone camp at the Dakota Access Pipeline.

Supaman’s forthcoming album “Illuminatives” speaks to many political concerns that go beyond Native issues, including the pipeline and immigration. He sees a need for “bringing the south-of-the-border Native people up here, and connecting more with other indigenous people."

Supaman is a voice strongly in favor of unity of all peoples, as are most Native hip-hop and rap artists. “I think that it has always been the case with artists that I know," he says. "They have used their platform to bring awareness of issues important to Native people. I just finished a tour of a bunch of junior high schools in Colorado; they have no idea bout Native Americans. I’m about bringing light to the darkness and times that we live in. I want to let people know that there is always light and hope at the end of the tunnel.”

Waln is excited that music and political action hand in hand seem to be enabling positive social change in his lifetime. "I am so happy to see it," he says. "Native young people fostering change and being the source of worldwide movements. I never thought I would see that."