Western-backed, Saudi-led coalition killed or injured hundreds of Yemenis in airstrikes on funeral in capital Sanaa 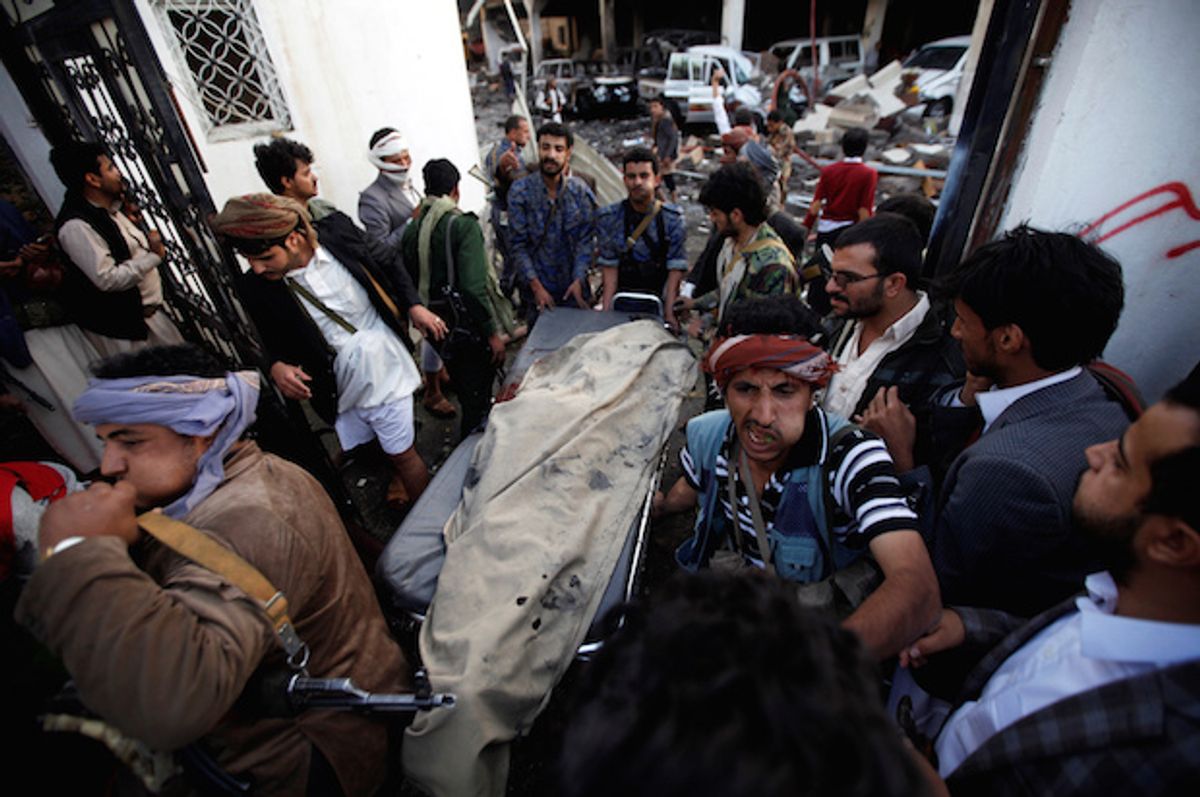 Yemenis carry the body of a man killed in a Saudi-led coalition airstrike on mourners at a funeral hall in Sana'a, Yemen on Saturday, October 8, 2016 (Reuters/Khaled Abdullah)
--

Western-backed, Saudi-led coalition airstrikes killed and wounded hundreds of Yemenis at a crowded funeral on Saturday.

More than 140 Yemenis were killed and at least 525 were injured, the U.N. said, citing health officials. The casualty figures are likely to increase.

The U.N. Office of the Humanitarian Coordination for Yemen released a statement saying the "humanitarian community in Yemen is shocked and outraged" by the attack. The humanitarian coordinator, Jamie McGoldrick, "unequivocally condemn[ed] the horrific attack" and called for an immediate investigation.

The Associated Press described the ghastly scene: "In the aftermath of the strike, hundreds of body parts were found strewn in and outside the hall. Rescuers collected them in sacks."

A rescuer told the Associated Press that the bombing turned the funeral into a "lake of blood."

The delegation of the International Committee of the Red Cross in Yemen said it is "mobilizing to support health facilities deal with the influx of dead and wounded." The humanitarian group sent 300 body bags and medical supplies.

Robert Mardini, regional director of the Red Cross in the Middle East, said he was "outraged" by the loss of civilian life.

Social media reports said the coalition carried out a "double-tap" airstrike, meaning it returned and bombed the building a second time, when people were trying to rescue those wounded in the first attack.

A video of the second strike circulated on social media. The building bombed in this video is the same building in Reuters' photos of the attack, meaning it is likely real.

BREAKING VIDEO
After 1st Saudi Airstrike on funeral in Yemen, people went in to rescue people, Saudi jets came back for 2nd and 3rd strikes pic.twitter.com/U7Z7WgDx6m

Salon has previously reported on the Saudi-led coalition's targeting of medical workers with "triple-tap" strikes.

The funeral, in Yemen's capital Sana'a, was being held for Sheikh Ali al-Rawishan, the father of Yemen's interior minister and an ally of Yemen's Houthi rebels and former president Ali Abdullah Saleh.

Among the civilians massacred in the attack were reportedly Houthi and pro-Saleh military and security officials.

Since March 2015, a Saudi-led coalition of Middle Eastern countries, supported and armed by the U.S. and U.K., has been bombing the Houthis and allied militias loyal to Saleh.

Human Rights Watch and Amnesty International have accused the Saudi-led coalition of war crimes. They have documented a wide array of coalition attacks on civilian areas in Yemen using U.S.-made weapons, including widely banned cluster munitions.

Despite the constant stream of atrocities, the U.S. government has continued to staunchly support the Saudi-led bombing campaign in Yemen — the poorest country in the Middle East.

The Obama administration has offered more than $115 billion in arms deals and military support to Saudi Arabia since 2009, including more than $20 billion since 2015. These arms deals have continued throughout the war in Yemen, despite months of calls for an arms embargo by rights groups.

The U.S. military has also refueled Saudi planes and provided intelligence to the coalition.

A U.N. panel of experts documented a slew of atrocities committed by the coalition, including attacks on hospitals, schools, homes, weddings, refugee camps and more.

Experts have consistently said that the Saudi-led coalition would not be able to wage the war in Yemen without U.S. support.

(UPDATE: This article was updated at 5:30 pm EST with the new casualty estimates from the U.N.)