How much for the naked staring? Even in the world of performance art, everything has a price

Performance art is by nature ephemeral, but it's still collectible — which means parts of it can be bought and sold 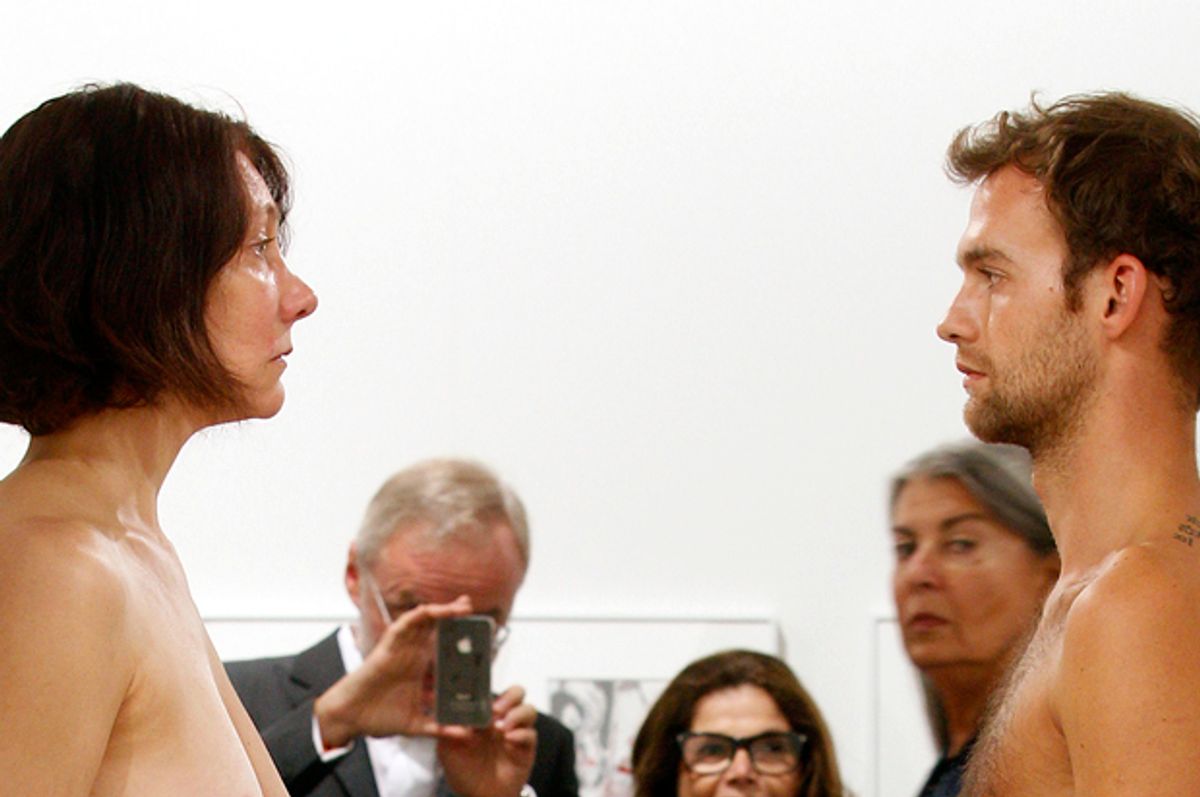 This week, the Zeus of performance art, Ulay, opens a major retrospective exhibition of his work at the Schirn Kunsthalle in Frankfurt. This comes just a few weeks after winning the biggest lawsuit in conceptual art history, brought against his former partner, the Hera of performance art, Marina Abramović. The gist of that suit was Abramović’s refusal to abide by their contract on how to deal with their joint works, and part of it included Abramović’s negligence in paying Ulay his agreed-upon 20 percent cut of profits from the sale of the works they created and enacted together.

If Ulay was awarded missing back payments of around a quarter of a million Euros, and if we know he was due 20 percent of the net profits, the math tells us that Abramović was selling their work for a total of 1.25 million over the course of about two decades. This means that the works (or rather, relics related to them, as we will see) are, individually, selling for five to six figures.

Ulay and Abramović’s joint works are not exactly traditional oil on canvas. Their most famous include: standing face to face screaming at each other ("AAA AAA," 1978); Ulay holding a bow and arrow, string taut and ready to fire, aimed at Abramović at short range ("Rest Energy," 1980); driving around in a circle ("Relation in Movement," 1977); sitting opposite each other in absolute still silence for many hours ("Nightsea Crossing," 1976); or running, naked, into pylons in a parking garage repeatedly, knocking them slowly backwards with the bruise-y thwack of their bodies ("Expanding Space," 1977).

Leave aside for a moment the question of whether or not this is the sort of art that you could imagine collecting. How on earth does one actually sell performance art? By definition, it is art that takes place once, in a specific location, for an audience of whoever is lucky enough to be there, and then it ends. That’s it. It is more like a one-off theatrical production than art in a traditional, plastic sense. I could see paying an artist to re-enact a performance on demand, but that’s not the done thing — though that, too was part of the Ulay-Abramović lawsuit, in which she was paid for permission to remix one of their joint works for a sportswear commercial. So what do buyers actually purchase, at significant expense, when collecting something that was transient?

To answer this question, I visited JAŠA, a young Slovenian performance artist who, just last week, performed at Frieze London. He’s at the absolute peak of the conceptual art world, having on his résumé performances at the Venice Biennale and Frieze New York. Ulay, in fact, made a guest appearance in JAŠA’s Frieze New York performance early this year. If Ulay is the Zeus of performance, then JAŠA, who looks strikingly like a younger version of Ulay — they're both bearded Olympians with well-worn, battle-creased faces — might be the art form’s Hermes.

As he strode across his studio, I was struck by the many art forms that he practices, though the public will know him primarily for performance. He’s a professor of painting at his alma mater, the Accademia di Belle Arti in Venice, and he also sculpts, draws and does graphic design. These tend not to be stand-alone media for him, but components of a gesamtkunstwerk, a complete, multifaceted, multimedia work of art of the sort made famous by Bernini in 17th-century Rome. When asked what collectors of performance art actually buy, the answer was: recordings of a performance, or physical relics of it. Artists will produce a finite number of “artist editions” of videos or photographs of a performance.

As a parallel in the world of video art, Matthew Barney’s "Cremaster Cycle" of five films-as-artworks were released in the form of just 20 special DVD boxed sets, retailing at $100,000 each, and sold primarily to museums, which then could screen them to the public. But some went to collectors, and they proved a good investment. A single disc from one of the 20 sets ("Cremaster 2," if you’re keeping score) sold at Sotheby’s in 2007 for $571,000. That’s surely a record for a DVD — even if the artists threw in a specially made vitrine and a DVD case made of saddle leather.

So limited-edition videos or photographs of a performance may be sold. Their value is based on authenticity (the work is a signed, official artist’s edition of the utmost quality and coming from the artist), demand (it must be something sought after in order to have a high price) and rarity (unique or limited-edition items keep demand, and therefore price, high).

The other option is to buy preparatory materials for, or items employed during, a performance. Were it to come to market, that bow and arrow from "Rest Energy" would probably bring in quite a haul. As JAŠA walked around his Ljubljana studio (he also keeps one in New York), conducting the air with an unlit Lucky Strike, he pointed to a series of beautifully crafted iron-and-glass vitrines, each containing an unusual found object. Turns out he made these display cases (in another life, he’d be an ace industrial designer), but the objects inside were components of a future performance. When I asked about his London Frieze event, entitled "The Relations," he smoothed out a sheet of paper marked with text and notes and sketches. (He’s an impressive draftsman, so there goes that silly notion that conceptual artists are the ones who are no good at the traditional media.)

So the objects gathered for use in the performance are saleable afterwards, as are the preparatory sketches and notes, which do have an aesthetic loveliness to them, but are also a physical record of the artist’s creative process leading up to the event.

If Proust’s marked-up manuscript, packed with marginal editorial notes, for "Du Cote de Chez Swann" sold for $1.3 million, then “editorial notes” that map out a performance make sense as a collectible. JAŠA once had an Italian collector request the very earliest sketches he had while he was brainstorming a performance. He selected around 20 and shipped them to the collector. As JAŠA describes it, the collector said, “You expect me to choose? I want all of them!” No problem, replied the delighted artist.

This gathering of relics from someone you admire is something anyone can understand, whether or not you’re a fan of performance art. It also helps to wrap your head around how someone like Marina Abramović can be a conceptual artist and a multi-millionaire through the sales of her work. While I might be hesitant to drop fifty large on a video of someone sitting in an art gallery interpreting pictures for a dead stuffed rabbit — though there is no one cooler than Joseph Beuys — I’d gladly shell out for a baseball bat used by retiring Boston Red Sox slugger David Ortiz, a “performance artist” of a different sort.